Real-time strategy games like Company of Heroes and Dawn of War II are now considered classics, relics of the past. Iron Harvest aims to capture the mid-2000s era of RTS gaming, and mostly succeeds at that goal. It’s got a lengthy, strong campaign full of heart that offers three distinct viewpoints with focus on giant, hulking mechs that release wanton destruction. The multiplayer is lacking in a few key areas, hurting the longevity of the game for the time being. As it stands, Iron Harvest is a revitalization of the RTS genre that’s sat dormant for too long, until now. 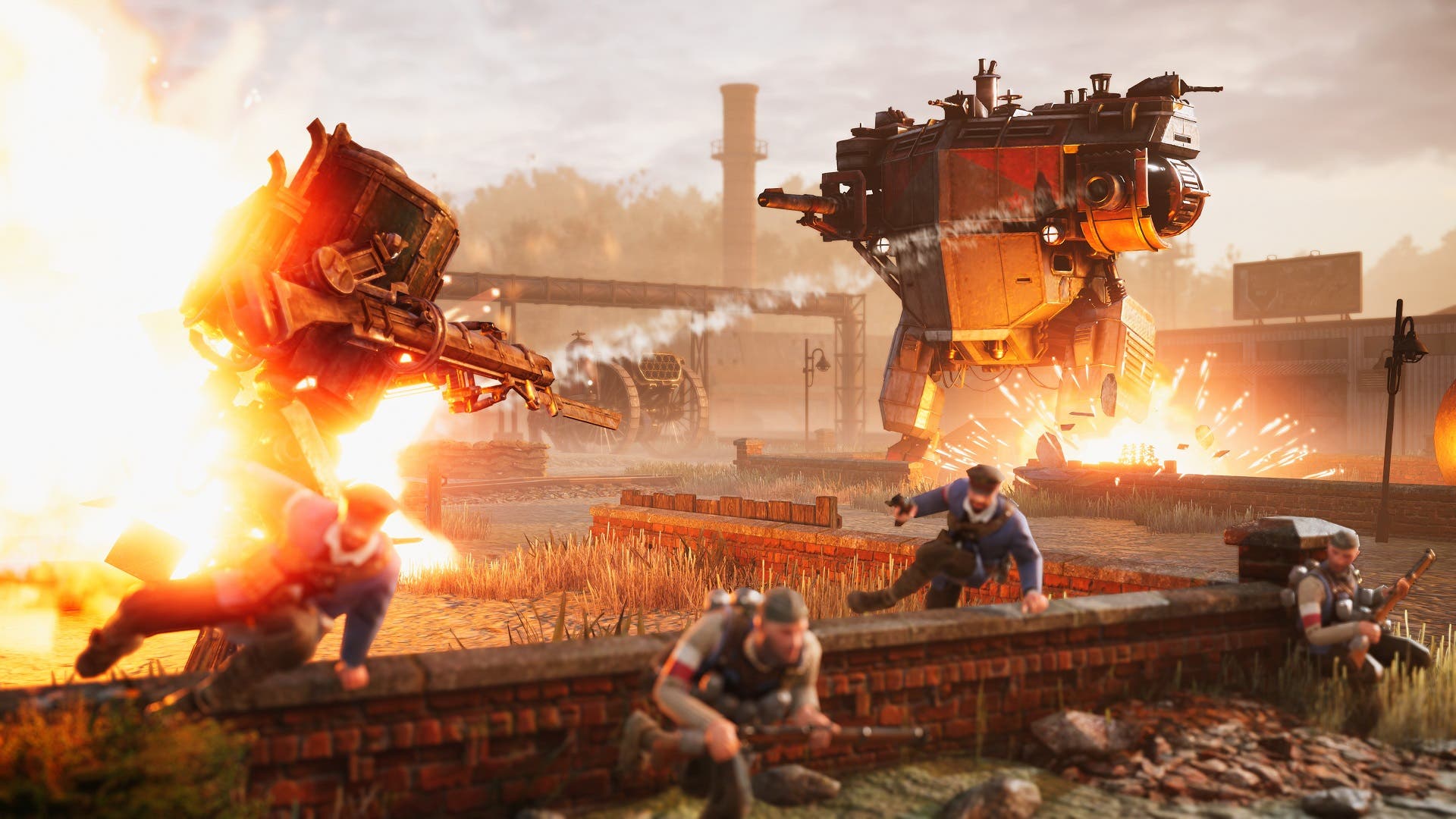 Sharing a world and elements that World of 1920+ that Scythe the board game does, Iron Harvest exists in the same one, but they’re considered separate entities beyond that. In this world, it’s an alternate reality 1920 after the first World War. Fictional countries are still recovering from the Great War. Mechs were used in this war, and have had technological impacts that have yet to be understood. Legs have replaced wheels on everything like tanks and cars, because they all walk now. It’s become a war-torn dieselpunk world, and everyone’s on edge.

The first mission places you in the tiny shoes of Anna, a young girl who gets bullied by some kids during winter when throwing snowballs. Then starts learning how to shoot from her brother, and how to defend herself over the years. It’s a really cute and clever introduction to mechanics, real-time strategy games, and the game itself. It simultaneously offers character and world building, almost effortlessly. There are 21 missions in total, with seven missions per faction. With three different factions to play as, there’s surprisingly only a few minor differences between them, but do offer separate stories to tell. The factions have parallels to real-world countries, for instance Polania is Poland, Rusviet is Russia, and Saxony is Germany. The three factions each have their own goals and reasons for fighting. Along the way you’ll play as nine heroes in total and their companions, who set out to be more outlandish than the last. The campaign is a slow, but enjoyable burn as it likes to focus on the characters over the conflicts. 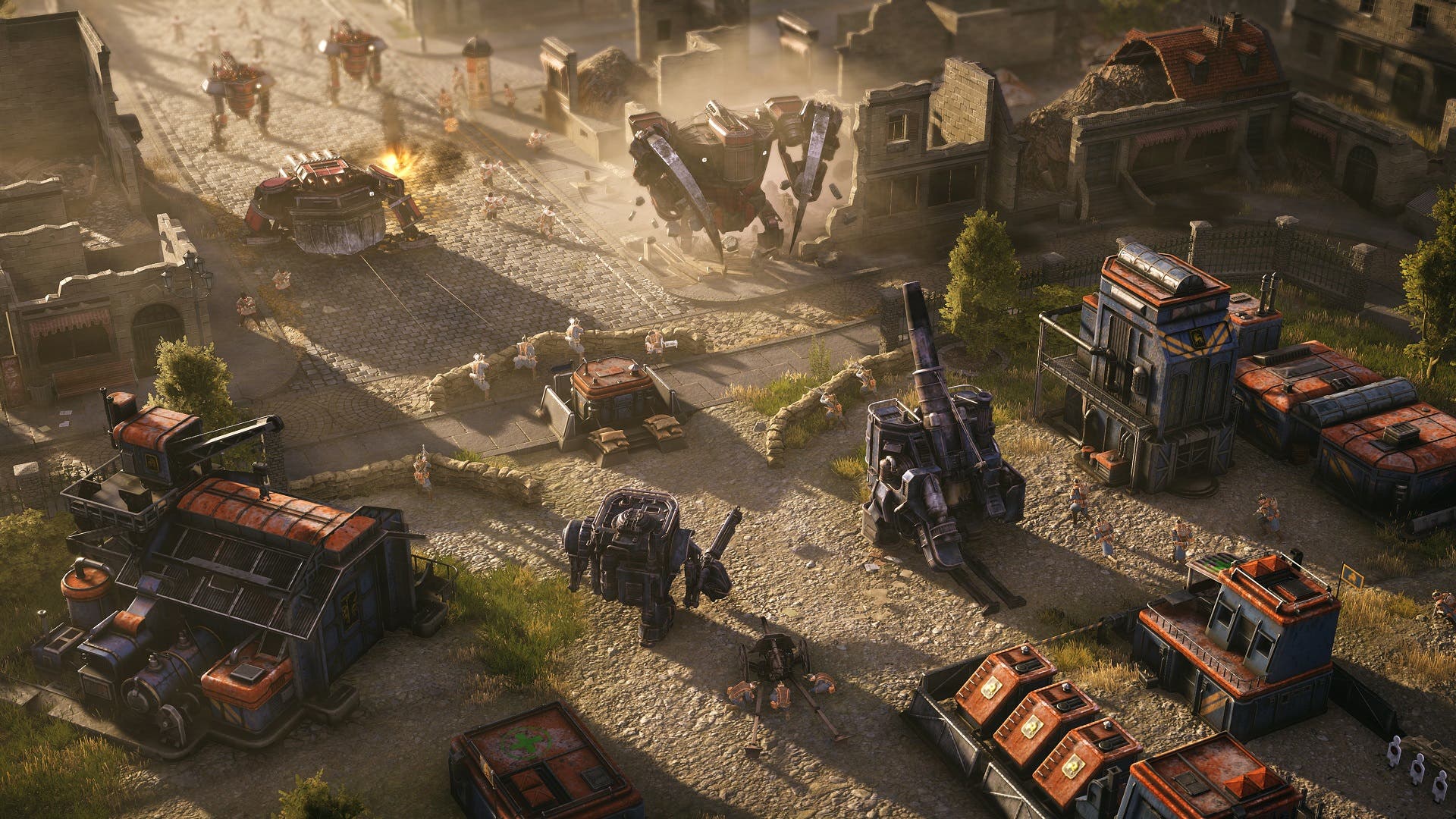 From a gameplay perspective, Relic’s Company of Heroes 1/2 and Dawn of War II come to mind immediately. There’s a little bit of StarCraft II in there, too, for flavor. This is the gameplay you should come to expect, and what era of gaming KING Art has targeted. Aside from the story beats, you’ll be scouring the map to capture control points, as well as gather iron and fuel resources. There isn’t much in the way of base building. You’ll build a headquarters, workshop, and barracks. They cover all aspects of what you’ll need, and then any defenses to keep them safe. Each building has an advanced variant, but it isn’t always required as part of the campaign. Each mission has a different population cap, so you won’t be able to turtle and build up units and resources until you’re ready. The AI moves about the map too frequently to sit idly by, you must constantly keep improving, building and capturing. As enemy units die, there are weapon pickups to alter your existing classes to give them flamethrowers, cannons, and even just be able to throw grenades. All units gain experience, so it remains important to keep units alive for as long as possible. With health pickups scattered around the map, this is very doable. For keeping your squads alive, they will accrue XP for capturing points, items, and killing enemies. Eventually they will be promoted into veteran and finally elite units, with additional tiers after. It’s a great system that will have you attached to your squads.

Mechs are a central feature and focal point of the game. From the website to trailers and other marketing, they’re everywhere. And for good reason, they’re powerful machines that can walk through buildings like they’re wading through a waist-high pool. Mechs not very fast, but they can easily defeat squads of human enemies just by itself. All mechs from any faction are susceptible to attacks from behind, where they’re the weakest. Units who take advantage of this will earn crit damage, and are able to bring them down a lot quicker than frontal assaults. They add a remarkable flavor to the game, whether it be campaign, skirmish, or multiplayer, and it works really well to see them in motion, almost as primitive mechwarriors.

KING Art have put a lot of work into the rewards and progression system, one that I wish more games would adopt. You have both a player and faction level that grows through usage. With each mission you receive a rating, and that adds to your scores. Accompanying in-game achievements will also contribute to this. It offers profile unlocks to use new banners, portraits, mech skins, and more. These are mostly for use in the multiplayer and upcoming coop campaign modes, but it’s nice to show off even to yourself. With each campaign mission offering primary and secondary objectives, the rewards are more often than not worth it to pursue. Lastly, there’s a free season pass that by simply playing the game, you will earn rewards, and each week new tasks are unlocked. It’s really cleverly designed, and unintrusive. Your participation is completely optional, but you’ll be very compelled to do so.

Iron Harvest has some difficulty spikes. An early Polania mission had me defending a train seemingly made out of paper-mache, and so I lost the mission many times. This can be equated to improper planning and setting up of defenses, but there’s simply far too many attack angles. Now, once I learned all the routes, I was better able to defend it. But that’s not necessarily the way I would have preferred. Missions after it were much nicer to me. It does seem that the normal difficulty is actually hard, hard is insane, and easy is the normal setting. An odd thing is that during missions where you must defend, you don’t get a running countdown timer, just a pop-up of text in intervals how much time is left. It’s absolutely agonizing not knowing at all times how long you have left to defend. But there’s some really great set-pieces throughout. 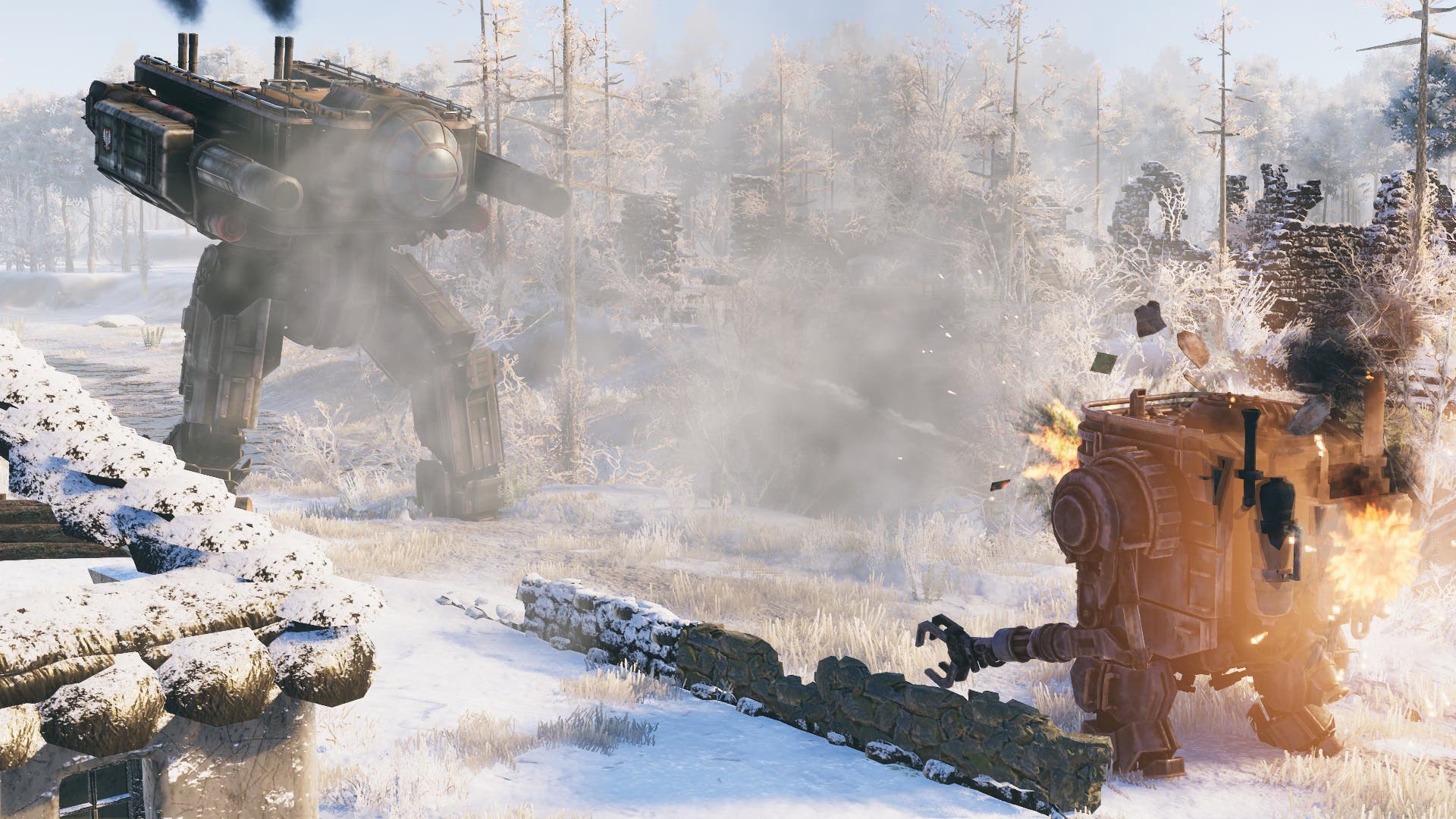 The game’s cutscenes are a mix of pre-rendered and in-engine. And honestly, they’re both great. They’re not seamless, but they are impressive nonetheless. The game looks excellent, it holds really high frame rates in the early-game, but as more units are on the map by mid-game, the framerate starts to suffer, dropping between 60-80fps. All things considered, the game performs well above 60fps in almost all situations and environments. The way the sunlight casts rays onto objects, and the shifting of clouds overhead temporarily darkening the area adds to the mood. This is one of the prettiest RTS’ yet.

The game unquestionably has Skirmish and Multiplayer modes, where you pick a map for team vs team battles where you’ll capture control points, fuel, and iron. You win by either accumulating enough victory points, or by destroying the opponent’s headquarters. These games go by awfully quick online, and if you try to turtle, you’ll get snowballed. Often there’s a tug-of-war that’s awfully tense in every map you play. Now, there’s some rightful disappointment that the game currently only offers six maps: three 2-player maps, two 4-player maps, and one 6-player map. This is a paltry selection than you’d find pretty much anywhere else, but it doesn’t make the game unplayable until they add more.

Iron Harvest‘s challenge levels offer a twist on everything else, and have specific goals. At this time there’s only three of them, but they are survival-based tasks that are very demanding, and hook into the harsh difficulty that this sometimes presents. ‘To The Last Man’ asks you to collect as many resources as possible while holding off waves of enemies, ‘Hold The Line’ suggests you lose as few units as possible, and ‘Fortress City’ wants you to defend a fortress by any means necessary. Like everything else, you can earn a bronze, silver, or gold medal. In order to get the platinum medal, you can turn on additional modifiers that add bonus objectives to make that attainable, but it is most certainly harder as a result. It’s a really special mode that I’d like to see expanded further. 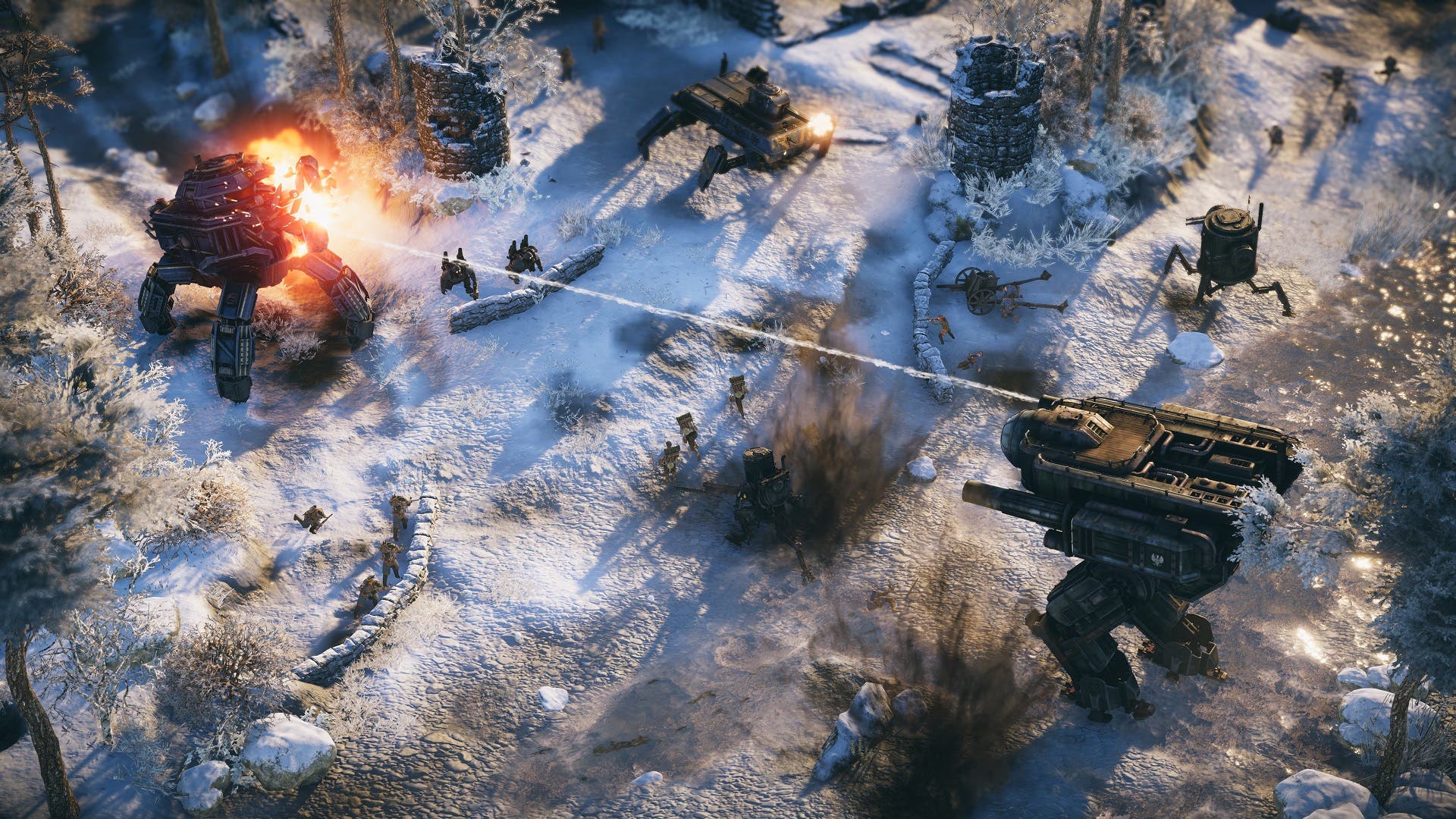 Iron Harvest is an incredibly solid RTS with a fantastic setting that will keep you enamored during the entire 20+ hour campaign. KING Art games have crafted a beautiful game with destruction backed by solid and balanced gameplay. It’s missing a few nuts and bolts to hold the rest of it together, but what’s here is sturdy to stand tall for now. I look forward to seeing the game expand and grow beyond its current state to fulfill its promises. For what you get, Iron Harvest is unique, rewarding, and full of depth; it’s absolutely worth playing.