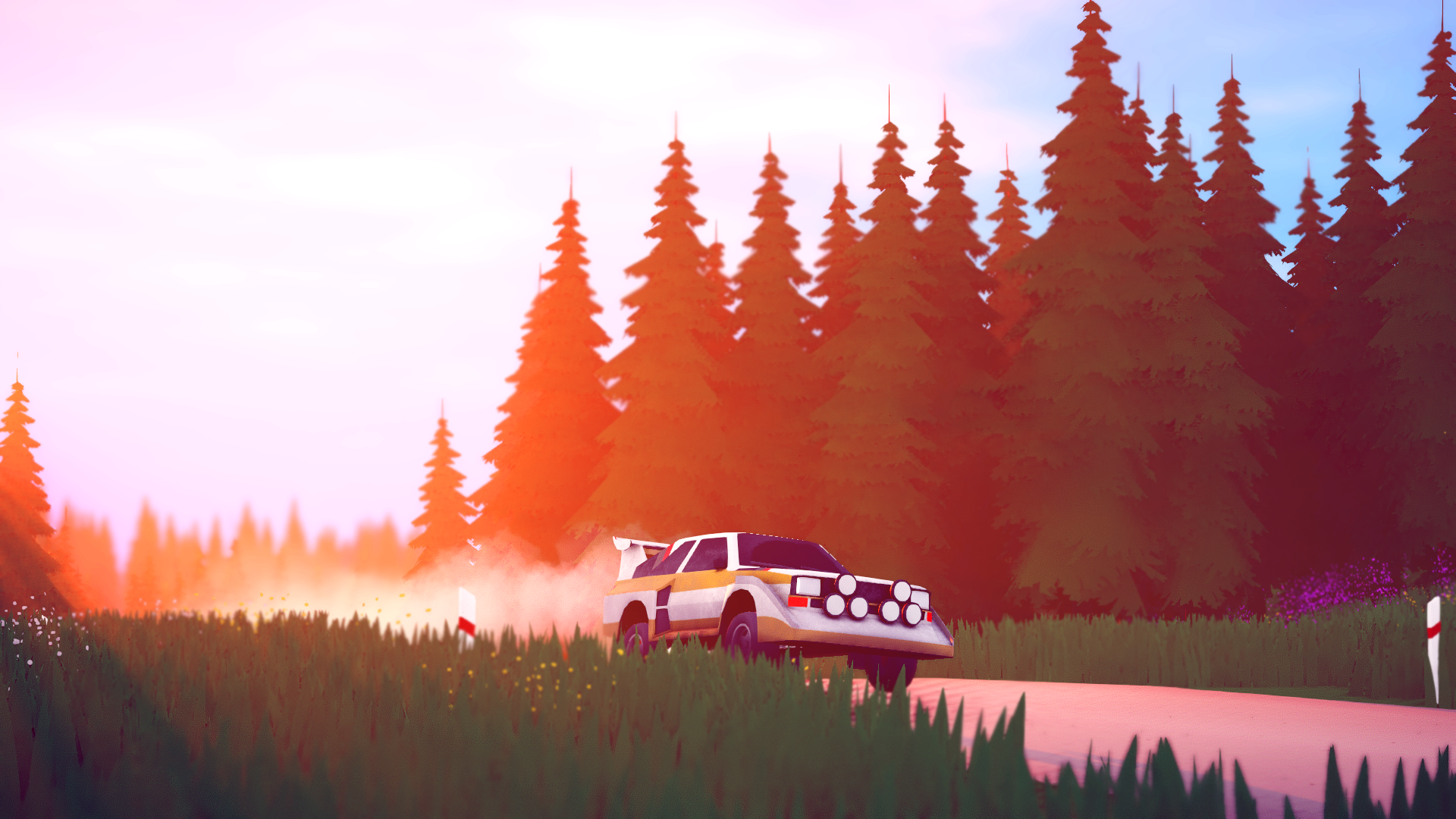 There are some games that come along that enchant you from the first moment you play them, and that’s art of rally for me. It’s a minimalistic rally game from Absolute Drift developer, Funselektor. Whether you know rally or not, this is a game anyone can pick-up and play by making it as easy or hard as you like. Racing iconic vehicles from the 60s through the 90s is immensely satisfying thanks to the sublime controls and superb environments. art of rally is at the apex of excellence, and not to be missed. There’s lot of modes to art of rally, from career to time attack to custom rally, with online events, and even a free roam. The career mode spans several season and all groups of rally’s “golden era”. Starting with Group 2 with rally’s humble beginnings in the 1960s, you’ll progress onto Group 3, Group 4, Group B, Group S, and finally Group A that ends in the 90s. Each year has a series of stages to complete, and in typical fashion you’ll be ranked by your overall time per race and the series of stages themselves. Do well, and you’ll earn a trophy for the top three positions as well as car and livery unlocks. Along the way in career, you’ll be able to make repairs at certain stages because your cars can take damage for too many hits. If things go catastrophically wrong, you have up to five times to restart for an entire season. art of rally smartly recognizes stages won as well as unused restarts for how well you did. For completionists, there are many reasons to replay older series to get 100% on everything.

Time Attack and Custom Rally works like you’d expect. Allowing you to get your fastest times on any given track as well as creating your own series of stages, respectively. The Online Events mode is where you can play daily and weekly challenges, and make a name for yourself on the leaderboard. Free Roam does what it says, allowing you to play in every location with large, winding, interconnecting roads to practice and hone your skills. There’s plenty of customization options for setting the weather and time of day for things like sunset, night, and even rain or fog. The controls are few: accelerate, brake, handbrake, and steer. Master these, and you’re well on your way. Whether you like to do the Scandinavian flick, rip the handbrake, or brake turn into corners, the game lets you execute any method. You can adjust difficulty and assists the game gives to you, to your liking.

art of rally features imitation cars, and while they don’t have the exact names they resemble, they’re accurate and well-represented that you don’t feel like you’re driving anything but the real deal. All of the locations are real, even in name. From Finland to Norway to Germany, Sardinia, and Japan, you’ll be globetrotting the world’s best rally stages. They span from gravel to dirt and even tarmac. 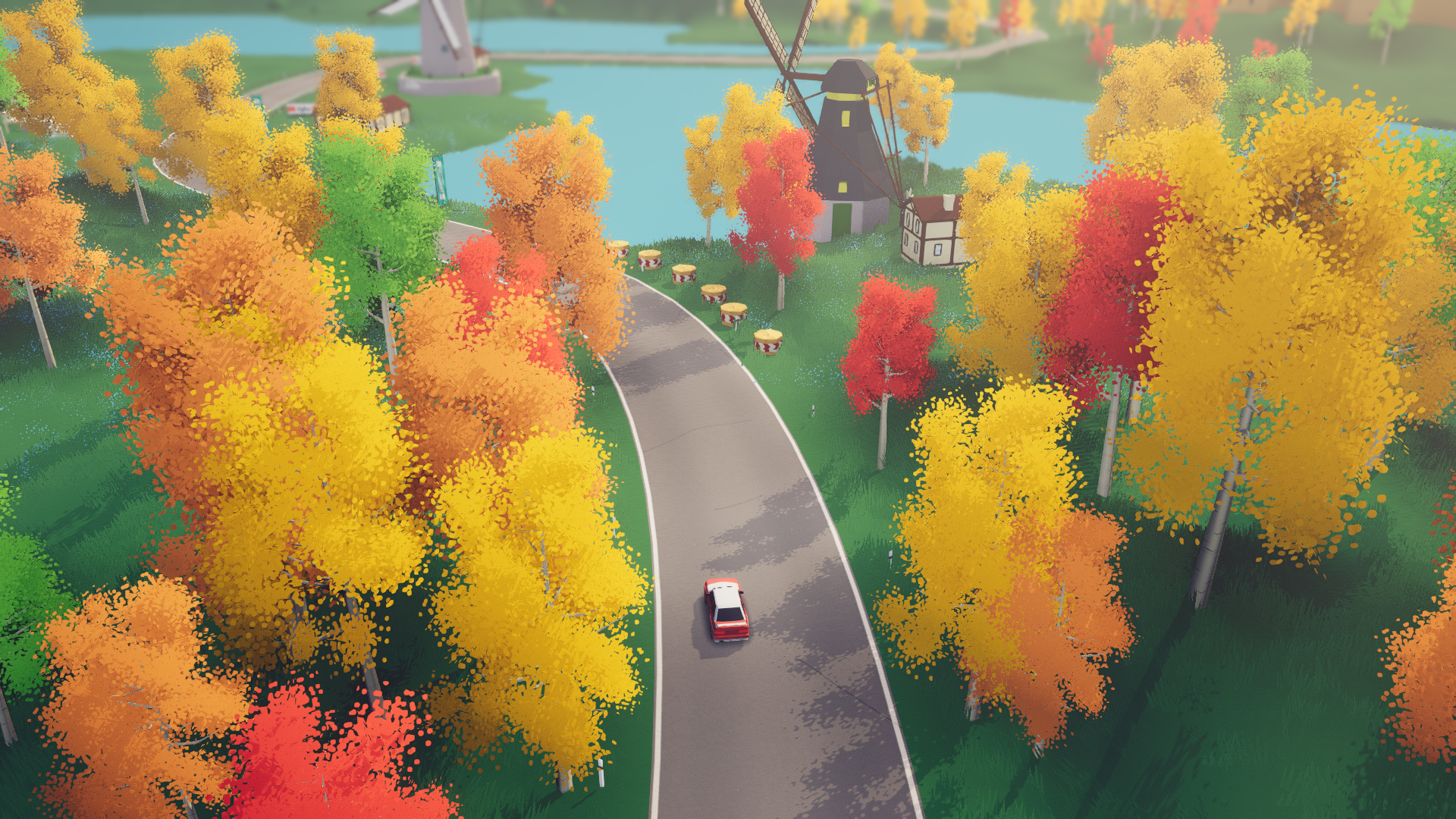 The minimalism continues with the game HUD. It’s fully customizable to the point of being completely hidden. By default though, you’re given a progress bar visualizing how far you are along the stage, your speed in your preferred unit of speed, tachometer and gear indicator, as well as the timer for how long you’re taking on the stage. There’s nothing new or revolutionary here, but it being unintrusive is one of its greatest qualities.

Setting a camera angle is far from exciting, but having the wrong one for how your eyes handle movement, or how you prefer to see upcoming sections of traffic can be detrimental to the experience. I personally found camera 3 to be my preferred option. Each camera angle dynamically follows the vehicle and swings left or right in a sensical manner. No matter which you choose, I never found myself experiencing motion sickness or concerned that I never saw enough. It feels like a helicopter camera, following the action. Funselektor even took into account the fact that the camera will clip through buildings and trees, and does a neat x-ray cutaway so that you can see the car at all times. 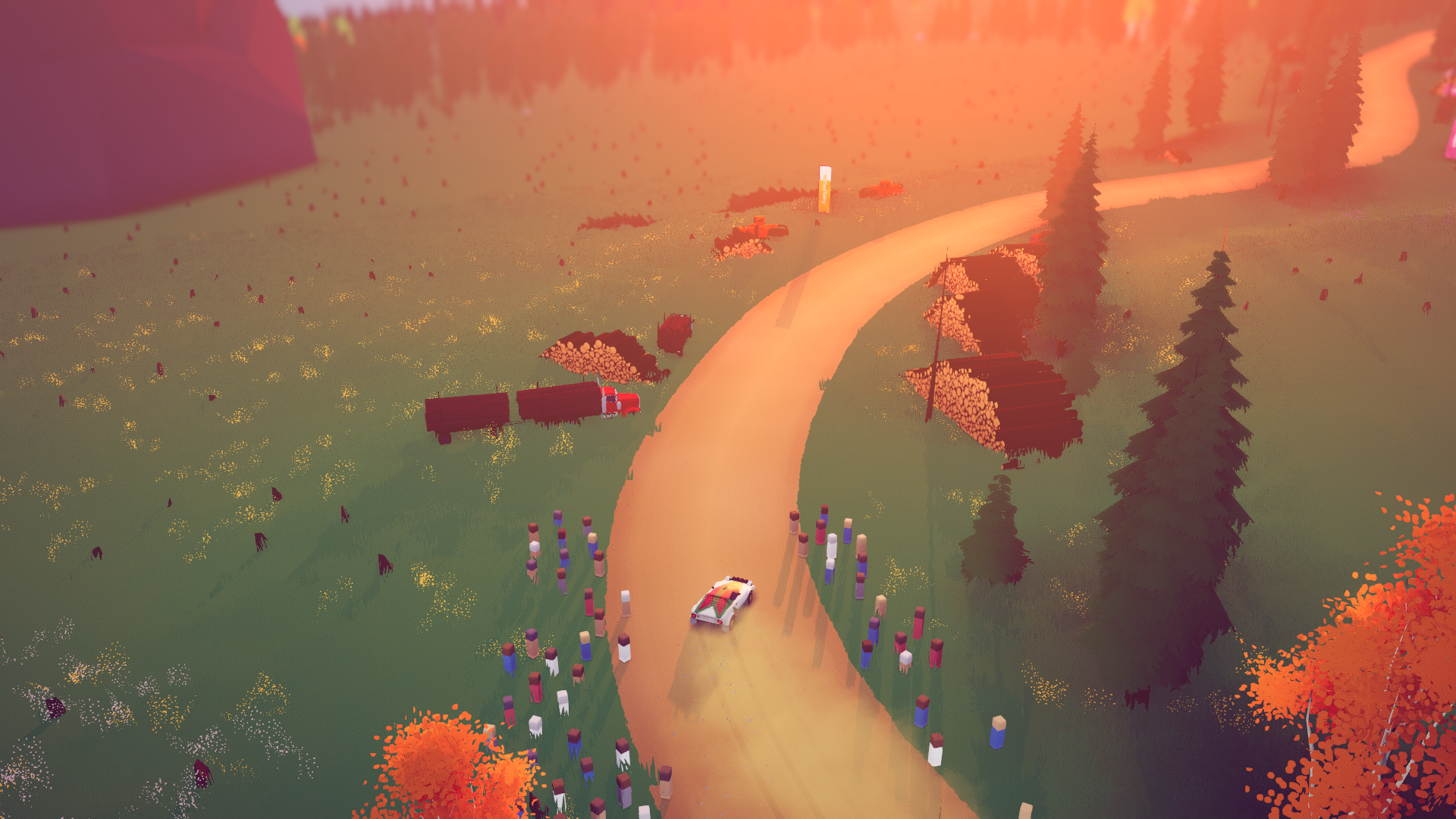 For the longest time, photographers would stand in the middle of the track to capture the perfect shot, whether it’s the driver whipping around a particular corner full of dirt, or performing a long-jump. The way that people stand in the road here encapsulates that element of rally, but there’s a lot more of them than a lone photographer. The crowds here are reactive and fun to watch. It’s funny given the developer’s history with making a drifting game prior, because the way the crowd dynamics work, it’s like that scene from The Fast and the Furious: Tokyo Drift.

I’d be remiss if I didn’t talk about the excellent soundtrack. art of rally mostly features synthwave as its genre of choice, and it works so well. While this genre didn’t emerge until the 80s, it just has a great vibe that works so well in menus and in-game thanks to Tatreal’s work here. There’s a photo mode where you can stop the action to get the perfect shot of your own. Or you can save a replay to capture a section that you did particularly well, and make highlight clips. The game is made to be played and shared. art of rally is a gorgeous game, with its default tilt-shift effect and stylized look. There’s lots of graphical options to make it look incredible, or even dial back some things for a more flatter look. The game looks and runs great, at all times. It’s only issue that I noticed during play was the pop-in. From trees to grass, the level of detail or object pop-in was highly noticeable. It’s never enough to be impact my enjoyment of the game, though. This is the kind of game made for photo mode. When you figure out what your style of play and preferred level of challenge is, art of rally is a beautiful marriage of sim and arcade. This is a game that continually showcases its name through its visuals and easy-to-grasp controls. It’s simple, yet elegant. It’s complex, but intuitive. It’s satisfying, and rewarding. art of rally is transcendent.