The Serious Sam series probably doesn’t come to mind for many when someone asks about classic first-person shooters or memorable protagonists. Croteam aims to change that, and Serious Sam 4 works to earn its place in the pantheon of first-person shooters that you’ll remember first. There’s a not-so-serious story in addition to Serious Sam as a playable character seeing improvements by often going the Deadpool route of fourth-wall breaking humor and references. These elements combined, establishes why this series refuses to live in obscurity or niche any longer. Serious Sam 4 doesn’t change the formula, and this is to its benefit, making it a bigger, better, and more planet badass than ever. 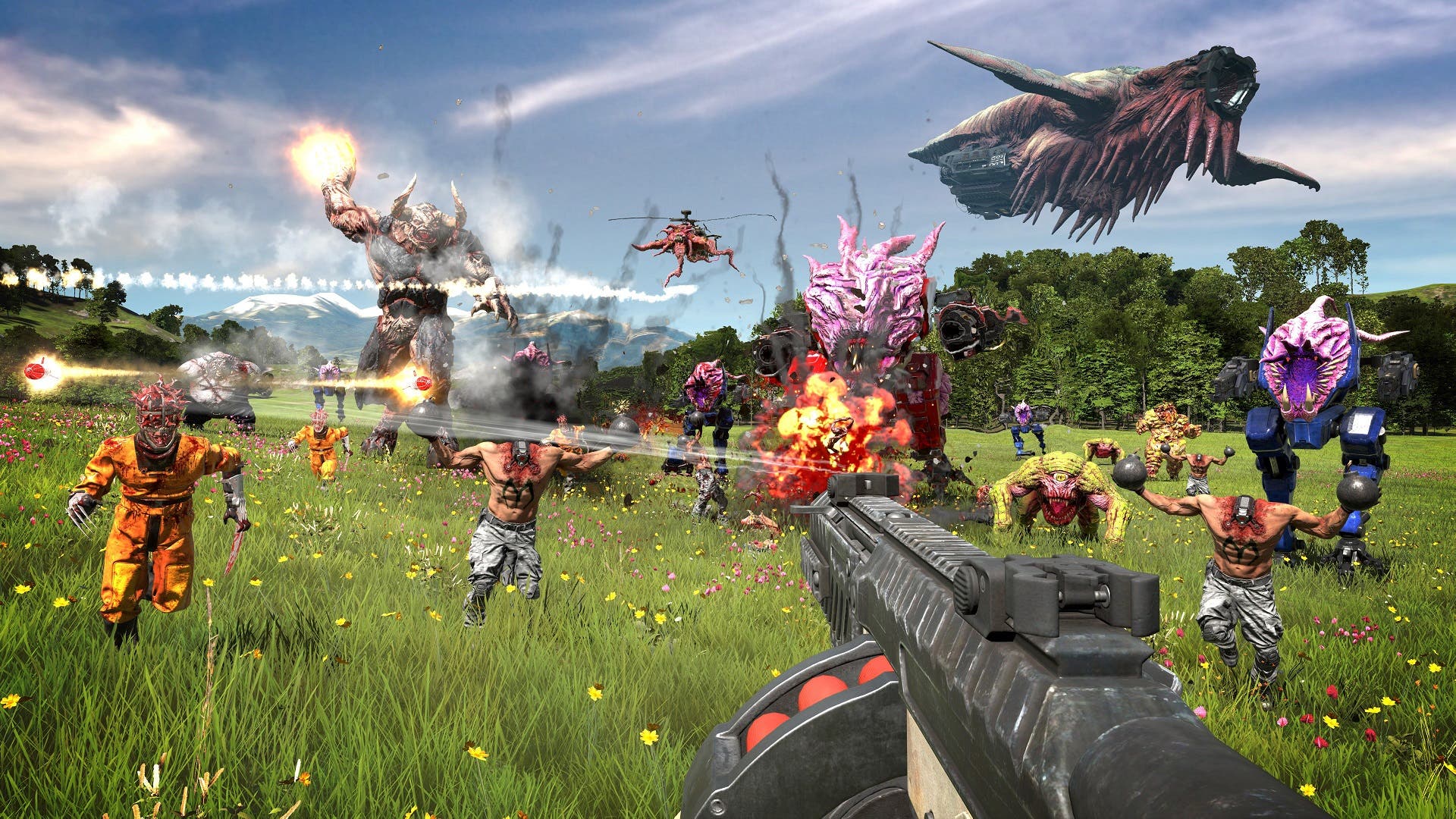 It might be confusing by its title, but like “Paranormal Activity 4”, Serious Sam 4 takes place first chronologically, before 2011’s Serious Sam 3: BFE and even 2001’s Serious Sam: The First Encounter. This makes it easy for anyone to jump in if they’ve yet to do so. While there’s been lore, and a thread of story, Serious Sam 4 amps both up by bringing on the husband and wife duo that wrote The Talos Principle. Their work here bolsters everything from its cutscenes to the overall narrative structure to tie it all together. An alien force has invaded Earth, the Earth Defense Force (EDF) members Sam “Serious” Stone and friends are the last line of defense preventing the remaining numbers of the human race from being wiped out. The tease given in the game’s wild opening is nothing short of impressive. You’re given a gatling gun and can just go ham on what’s in front of you. The circumstances are dire, but not impossible.

The game takes place over 16 chapters to include the prologue level. You’ll travel from Rome into the Vatican to the countryside of France, and even Tunguska. It’s a game that quite literally goes places. I was a bit worried that the game was gonna look a bit samey as the Italy levels reminded me of The Talos Principle (hey, another reference). This doesn’t hold true, and each location is different from the last. The game is at its best with its massive wide open areas to see things way off in the distance. I’m not sure how big these maps are, but there’s a lot to traverse if you wander off the beaten path, and there’s nothing to do except on the linear trail the game sets for you. There’s primary and secondary missions to take on. The secondary missions are completely optional, but always give you a reward of a weapon or gadget that will aid you in your battles. The game includes helpful breadcrumbs to guide you. Expect this to take you 10-12 hours to do and see everything there is. 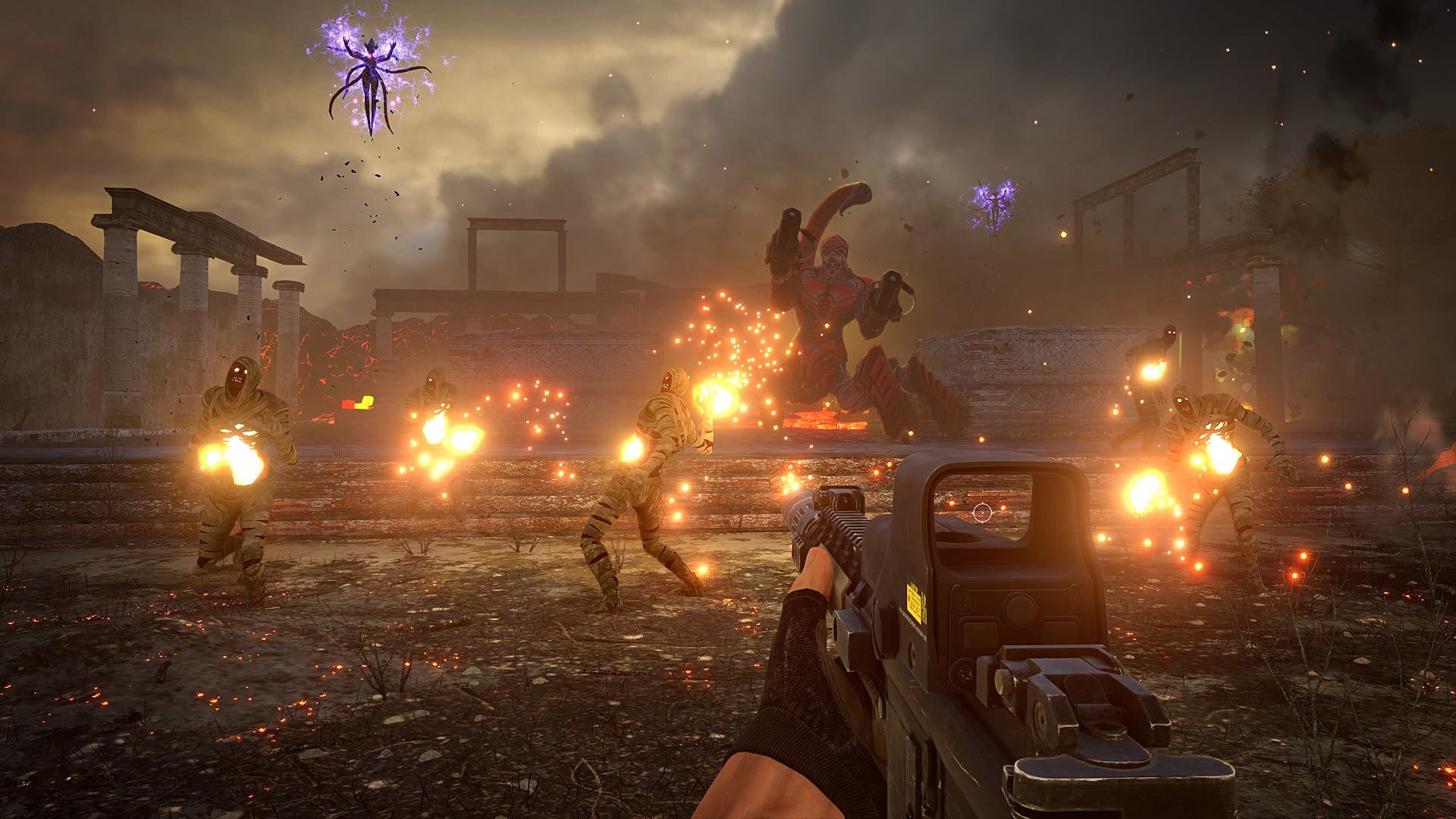 The gameplay of Serious Sam thankfully remains unchanged here. You’ll be circle strafing and running backwards to avoid being overrun. This is a game where you must always be on the move, as slowing down or stopping completely will get you killed. It’s an overwhelming feeling, but it’s fun as your backpedal speed is just as fast as running forwards. Sometimes there will be keys that gate progress, but it’s usually done in the vein of humor, and backtracking is kept to an absolute minimum. There are ability points to be found, which you can invest the points into skills to be able to dual-wield small and large weapons, reloading while aimed down sights, picking up random objects like knocked over stop signs, and being able to do more damage with low health. It’s a system you can invest in completely, partially, or not at all. Though I’d recommend avoiding the melee to get health back ability, you’ll die faster than you can heal from it. You can spend a point on being able to ride stunned enemies, which is well worth it.

There are a whopping fifteen weapons in the game. There are variants of the shotgun, rifle, and sniper rifle, but they all have purpose and importance. Serious Sam 4, more than any others prior is about systematically dismantling enemies with the right guns. You tend to learn when it’s time to switch to certain weapons to handle specific enemies, like the double shotgun for the bone horses or the pump shotgun for the headless guys. The pistol has unlimited ammo, but it must be reloaded and has a relatively small magazine. Where it gets exciting is when you are able to find upgrades to existing weapons, like making the grenade launcher shoot chainsaws which tear through multiple enemies and ricochet to find as many targets as possible. When it comes to bosses, all weapons are viable for bosses since there’s no ballistics or falloff damage over distance. There are two moments in the game where you lose all your weapons and must start over, but for the majority of the game you’re able to build up a huge arsenal. There are several gadgets, but the most unique is the black hole grenade which nearly sucks up the entire level to clear it. There’s a lot to experiment with and utilize here, you never rely on any one or two weapons. 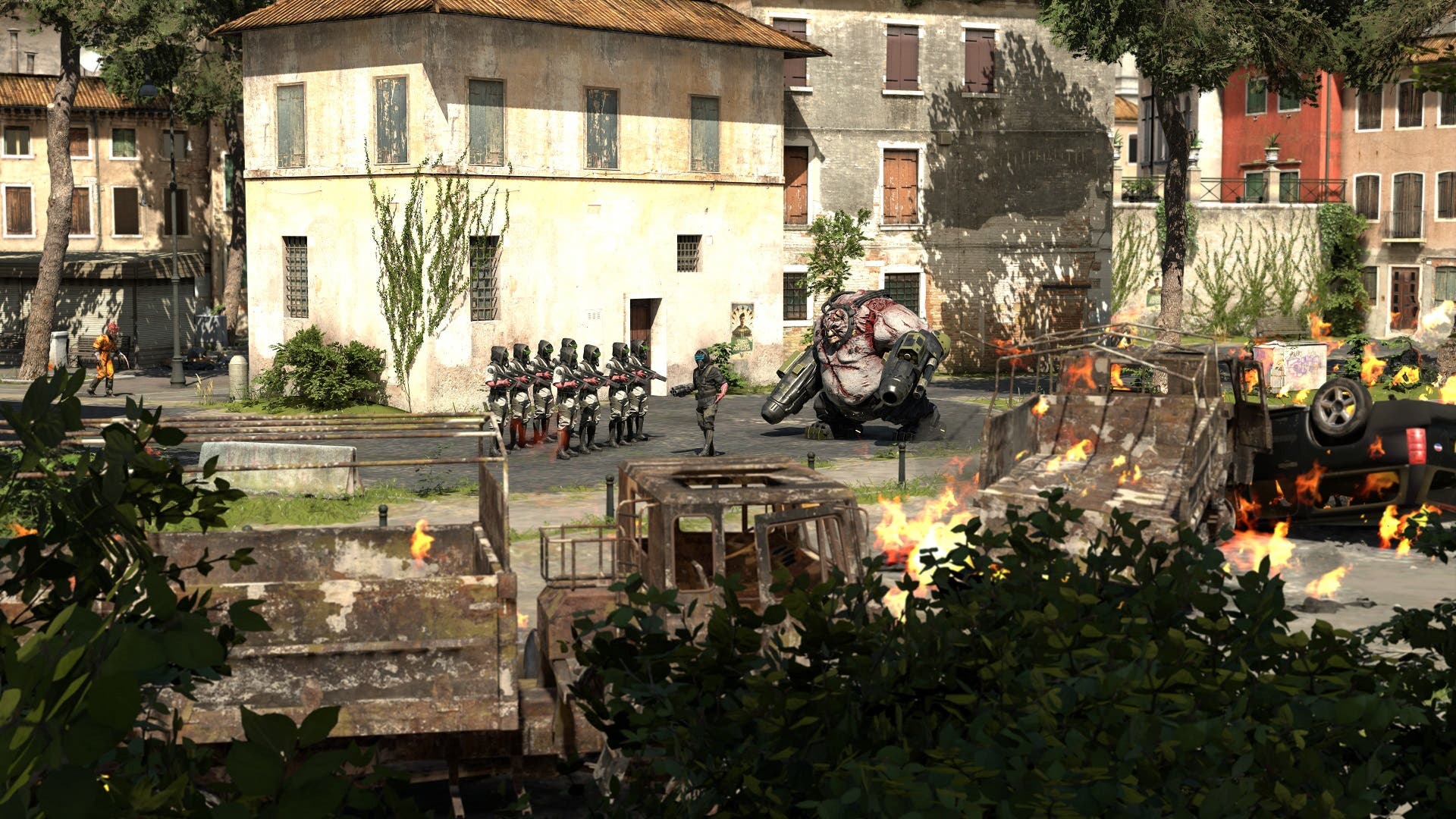 It’s worth talking about how Sam isn’t misogynistic, rote, or even unfunny as a character. He’s written as a wholesome dude who just wants to kill aliens. I laughed out loud when Sam remarked to another character they were “scorp buddies” by killing scorpions at the same time. It’s got a solid supporting cast of characters that are equally well-written and all looking for one-liner glory. While the cutscenes in motion are a bit lacking, the voice acting is more than adequate. It’s really commendable that Croteam really went all-out, trying new things that paid off.

You’ll be reminded from the outset of Serious Sam 3: BFE in terms of look and feel, but it really isn’t. It’s a league all its own. You can however mess with color options and make it vibrant like Serious Sam 2. While the first two games dealt with time travel, and the third game was emulating the gritty shooter of the time, Serious Sam 4 has remake/reboot vibes with it going back to the beginning. 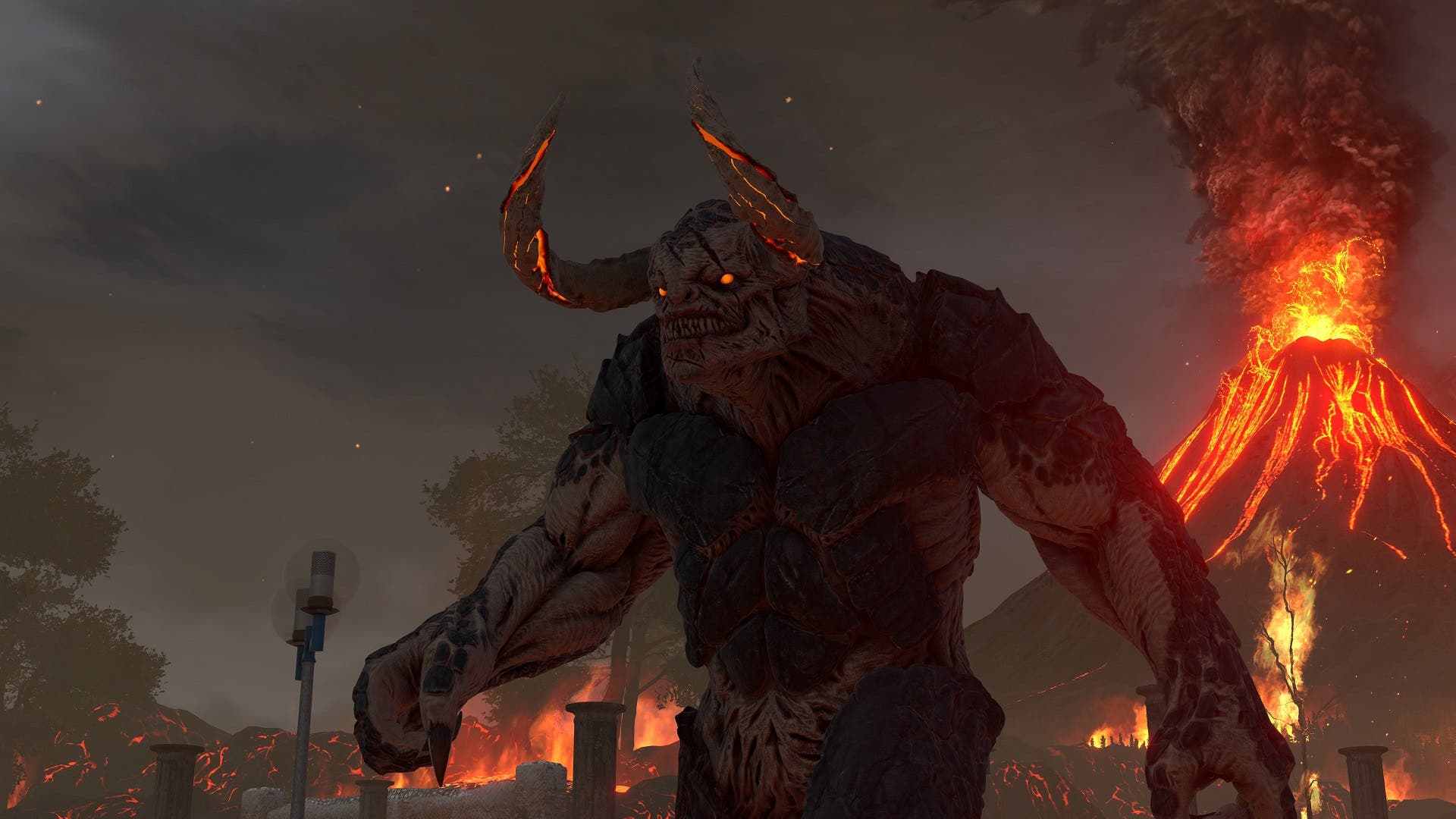 There’s no multiplayer at launch, which is fine by me. Though you can either play solo or with three others for 4-player coop. This incites competition among your friends or strangers as the game does tally scores at the end of a chapter. It’s especially great to compare number of kills, as the game counts that, how many secrets you’ve found, how much time you took to get through the level, and the difficulty you played at.

The game’s soundtrack is really good. For combat there’s rock tracks that really fit with the action, and the ambient music is melodic and somber (you know, because the human race is just about extinct), and it’s just so well composed.

Serious Sam 4 boasts the new Legion System, a way for the engine to render thousands of enemies on-screen at-once. It doesn’t happen on every level, but when it does, it’s an incredible feat that it doesn’t get bogged down in any way. When you consider the number of monsters and aliens in the game, it’s continues to be impressive. There’s a lot of new enemies in the game this time around, and a compendium to refer to, so that you can see them rendered in 3D to learn everything you’d want to know. There’s no limit to what you’ll fight: vampires, lizards, headless kamikazes screaming dudes, drones, mummies; nothing is off limits. Vehicle sequences are new in the game, and you’ll get to ride a motorcycle, and things like that. The first time you’re given a vehicle is the most important one, as it’s the new Popemobile, a weaponized mech. Let that sink in. 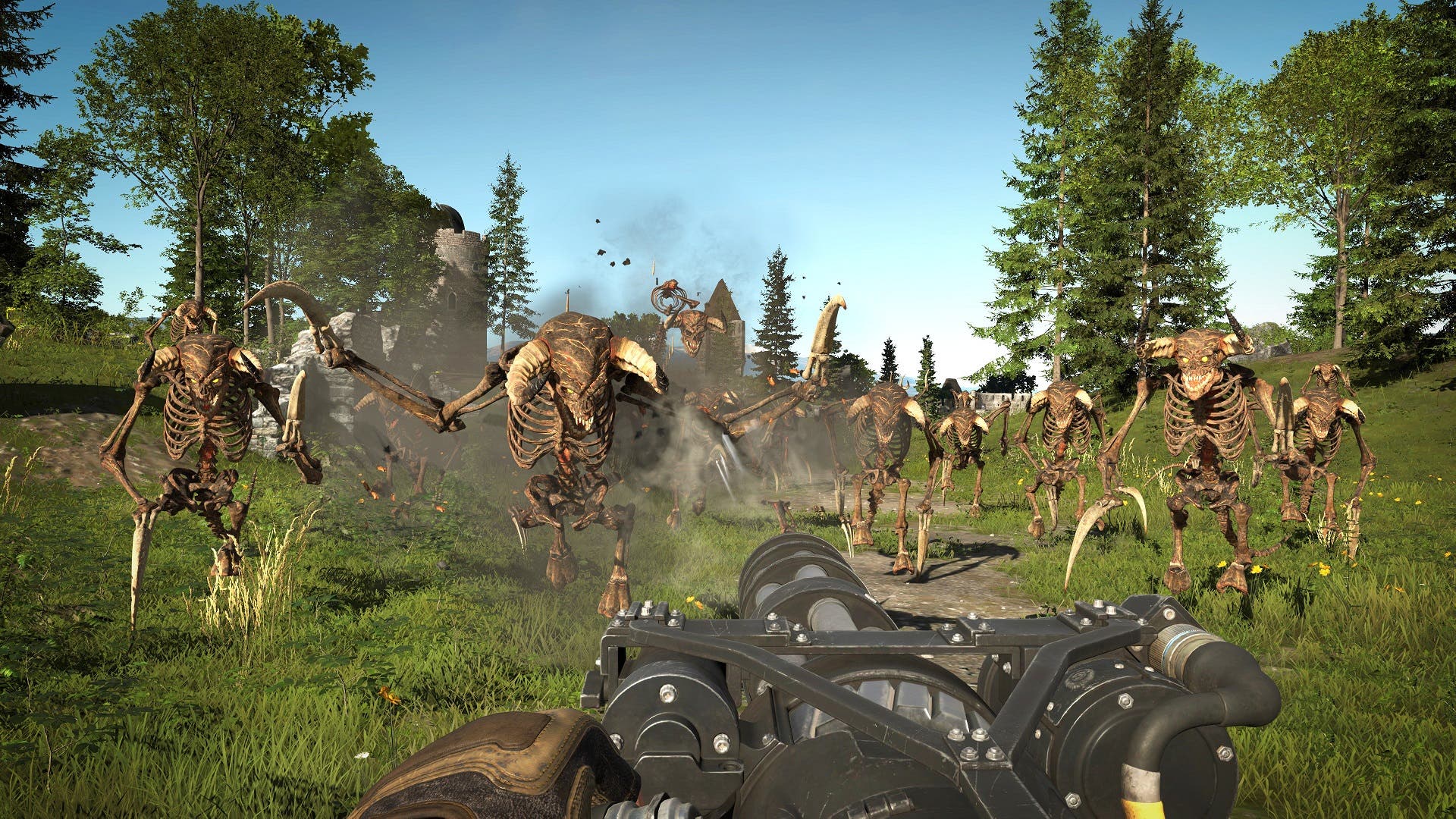 The game runs as a 64-bit executable, which opens the pathways for lots of memory to be used, which is great for when the game is utilizing the Legion System for all those on-screen enemies. It offers three APIs to display the game: DirectX 11, DirectX 12, or Vulkan. I found DX11 to be the second best performing, but has some visual shortcomings. Vulkan I found to be stuttery and offer the least performance. This leaves DX12 to be the best looking, best performing, but most expensive option. If your GPU can handle it, it’s definitely the route to go. I was getting 70-80fps rather consistently, with some denser areas dragging it down into the 60s. There’s also support for AMD’s FidelityFX adaptive sharpening (which works on NVIDIA GPUs), multi-sampling, and VRS. Variable Rate Shading should be left off if you have a modern graphics card, but the Serious Engine soars on nearly any configuration. Croteam has always been friendly to motion sickness, so you can set a field of view and even reduce bobbing animations. It’s a fully featured and customizable game that will let you find the perfect balance. 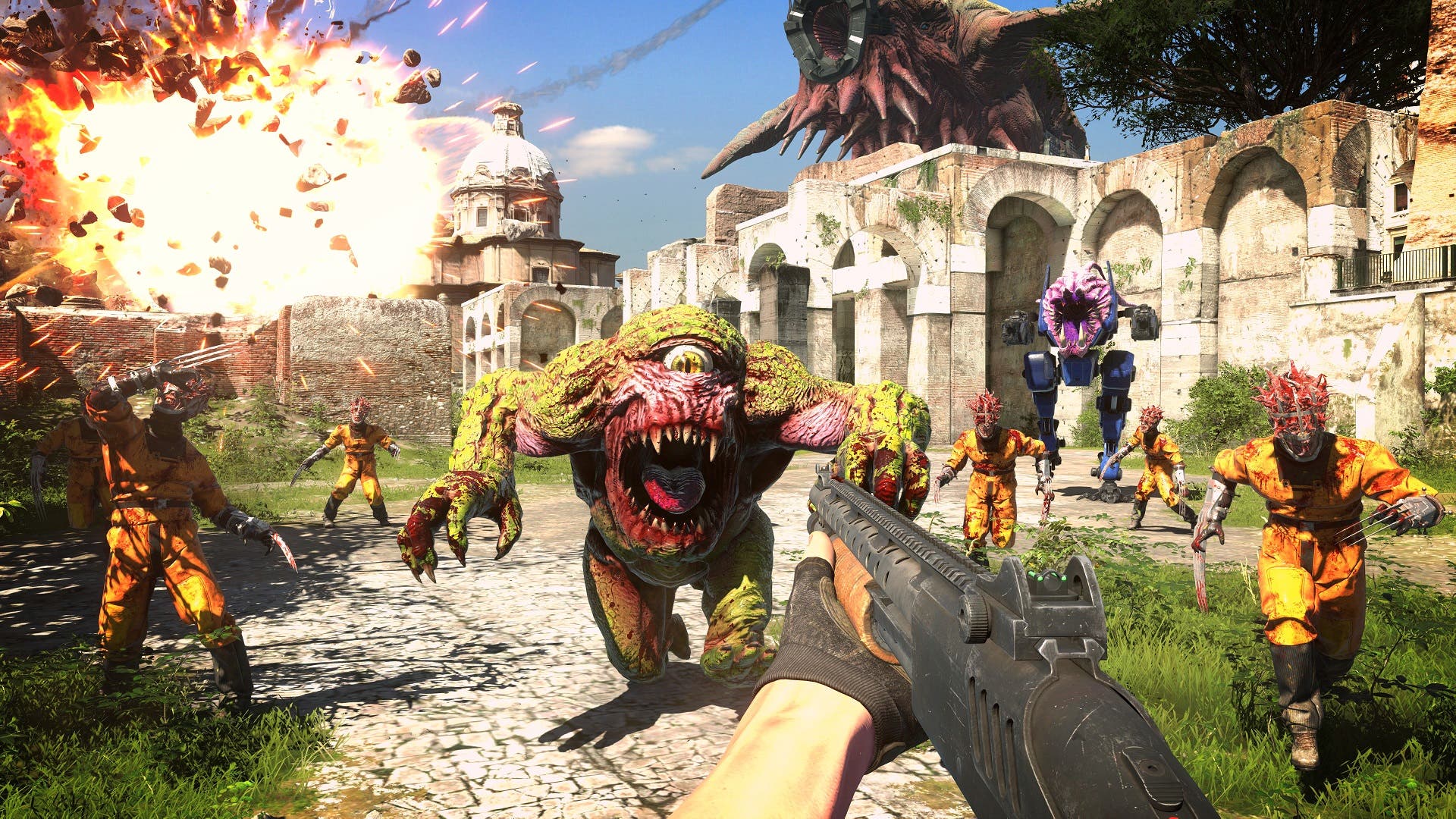 If you haven’t tried the Serious Sam games, now’s the time. This entry truly starts at the beginning, serving as a great jumping off point for anyone to get acquainted. It’s a return of the classic run’n’gun first-person shooter with some damn funny punchlines, and Croteam gives it new life with a story and improvements all around. Serious Sam 4 is resplendent, with astronomical hordes of enemies to dispatch by devastating and varied weaponry – this is Croteam’s best shooter yet.