The next generation of games is being ushered in, and leading the pack is The Falconeer. While my experience has been solely on PC, it offers a fresh and exciting feeling I’ve not had in the prior generation. The game has incredible sound design, a sensory overload in visuals, and satisfying combat that is a soft mix between Crimson Skies and Panzer Dragoon. There’s also a careful balance of exploration and combat that drives the game in a direction we haven’t seen before. The sense of wonderment while playing The Falconeer is unparalleled. 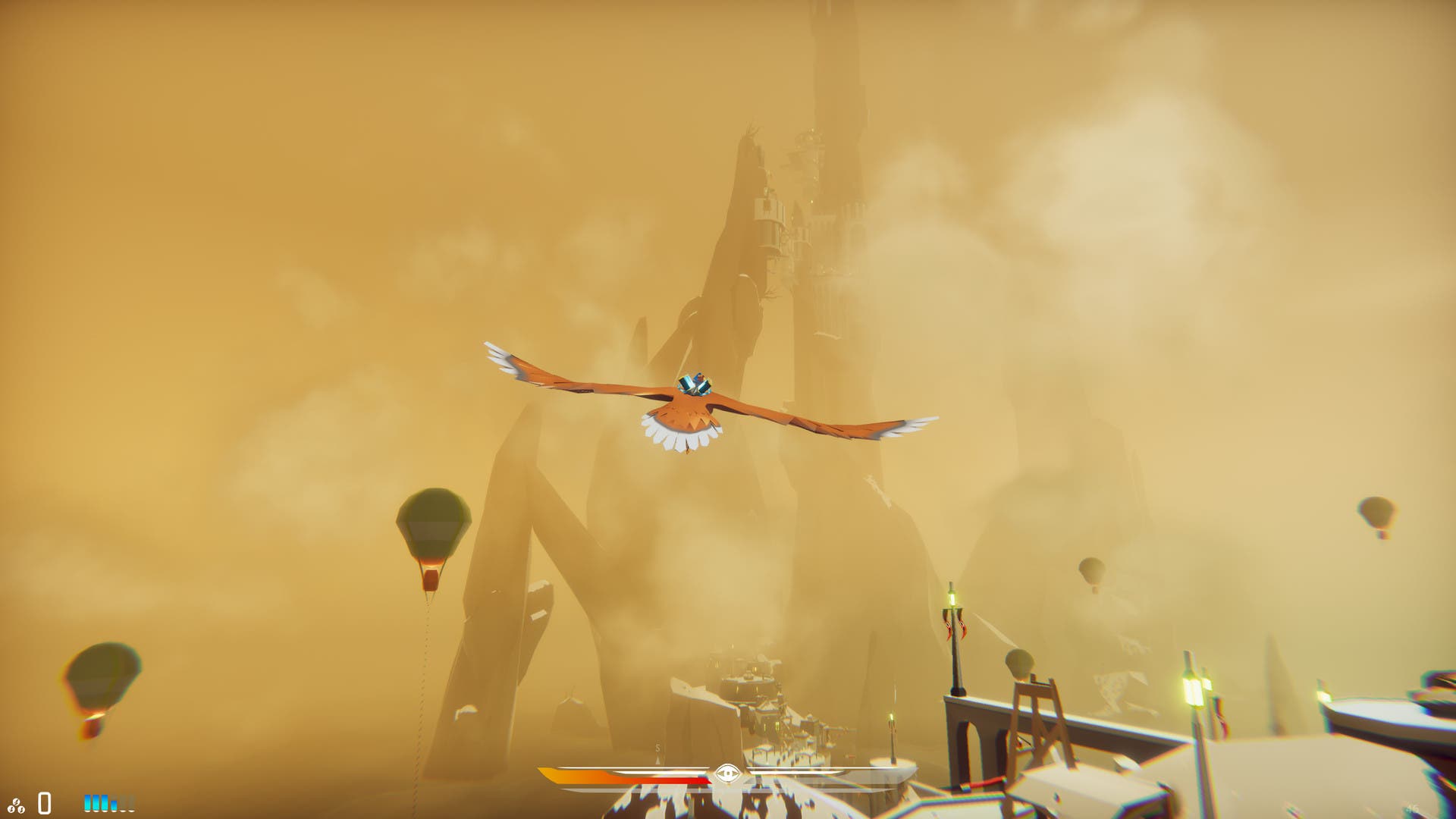 In an unusual direction, all of the game’s chapters are open from the beginning. Each chapter, which there are four of, give you a different faction to play as rather than tell a story in a linear fashion. These factions have their own series of missions and tasks to complete. When they’re all done, an epilogue chapter opens up and you’ll see the game’s ending in around twelve hours, at its earliest. But this is a game that desires you to take your time than mainline it.

Aside from factions, there are different starting weapons for selecting your preferred class. There’s the Falconeer, which is the name of the game, Mercenary who fights for money, Imperial Freelancers, and the high-damage Mancers. There’s a “something for everyone” approach to this game, but also the classes in relation to factions offer up a different playthrough with every selection. 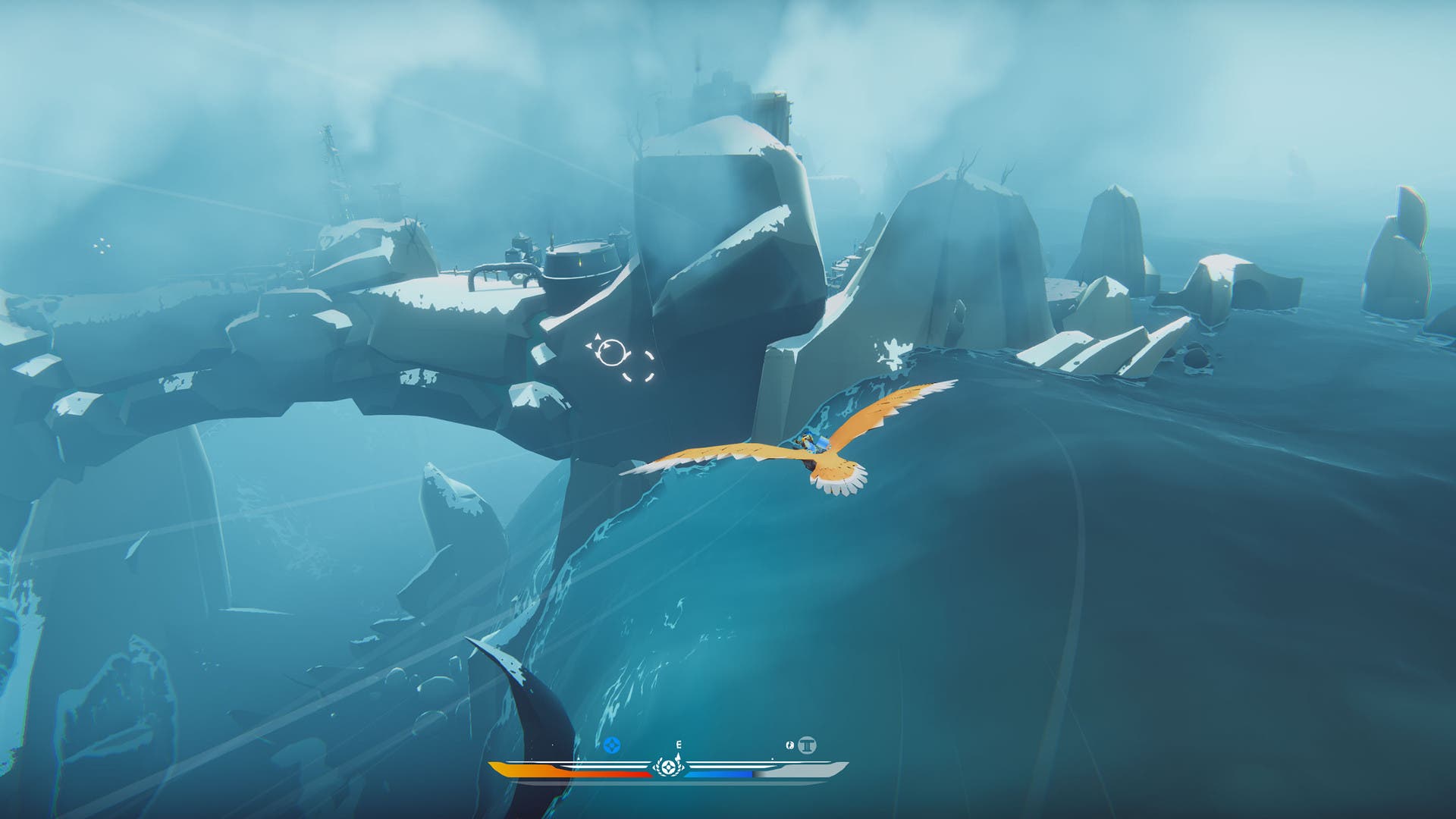 Save for craggy rocks, outposts, and civilian towns, The Great Ursee is all ocean. The hows and whys are unknown, but know that you’ll be spending all of your time in the skies, so you’ll need to get acquainted with the aerial movement. You’ll glide and soar while managing your energy system to boost and dodge. There are thermal pockets that will raise you up, and currents that offer some free boosts. There’s a very detailed and minimal compass to guide you, to threats and to places on the map to land at.

The Falconeer is equal parts exploration and combat. You’re free to roam the game’s world whenever you like, and can seek to reveal the fog of war, find points of interest, and gather bits of lore throughout your time. There’s even underwater locations to explore. There’s lots to find, including races that will unlock opportunities with factions. Fighting with whatever weapons you have, will pit you against other falconeers, air ships, and water-based ships. You’re able to lock-on and destroy sub-systems or follow your target. It’s almost sad to put down the potentially unwilling falcons that are being used for this. During some missions, you’ll be given a randomly assigned wingman who can simply be set to attack a target, or guard you. It works well enough, and you’ll come out of most fights unscathed thanks to your backup. 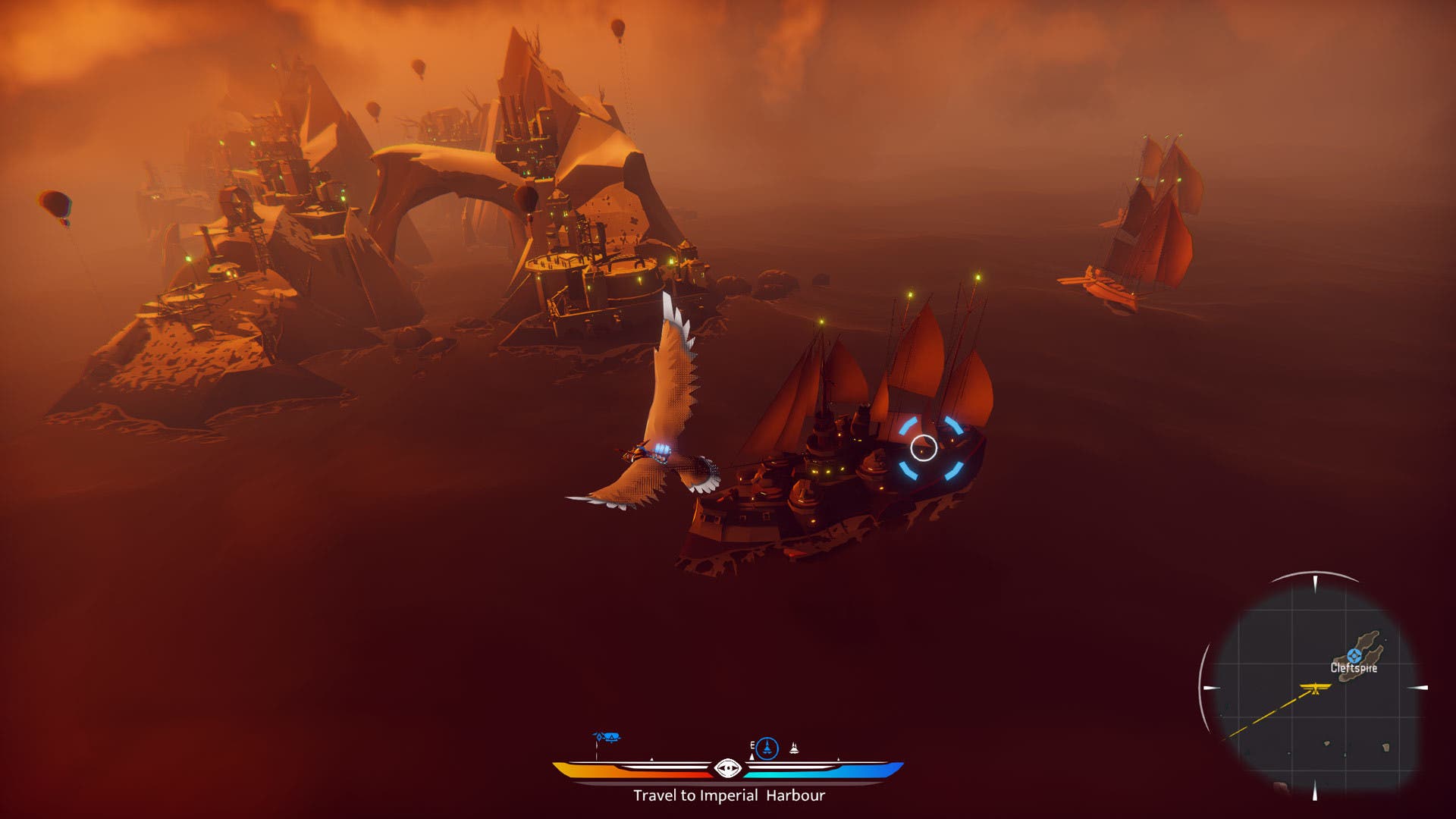 The missions or quests that you undergo are fairly straightforward, and tend to repeat in different manners. There’s escort, delivery, patrol, and fending off pirates as some of the things you’ll do. The tendancy of reusing these types of missions didn’t truly ever bother me, but it did feel like these missions padded things out longer than it needed to.

Completing missions will net you experience, and that experience will level you up, and net you more attributes that boost your survivability. You’ll also be given splinters, this serves as the currency of the world. There are traders you’ll come across at each outpost, and you can purchase upgrades to your armor, upgrade weapons, or purchase new weapons entirely. 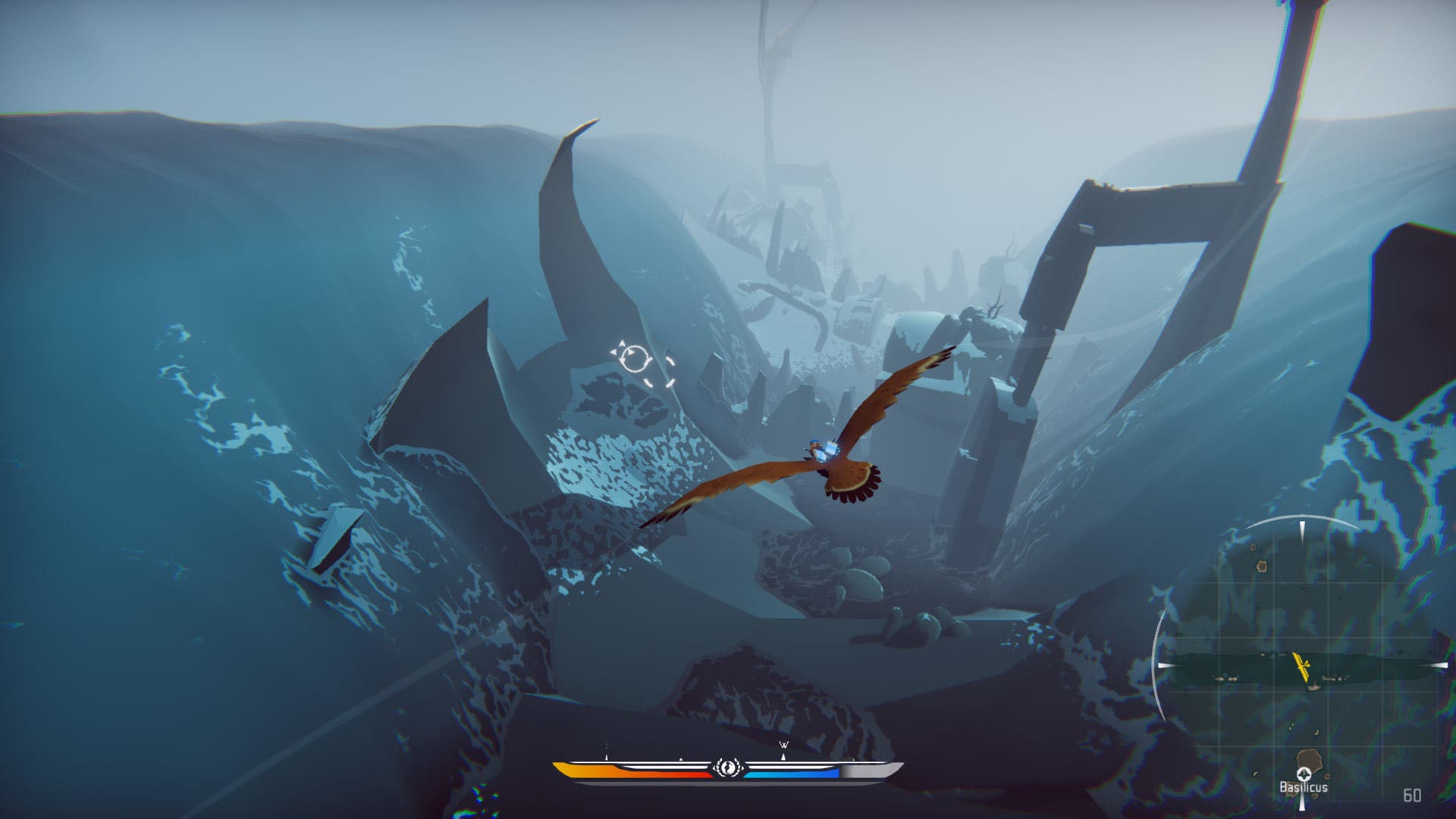 I played most of the game using an Xbox One controller, and nearly any gamepad will do. What I think is most interesting is that this game supports flight sticks. I have a Thrustmaster T16000M FCS HOTAS, which has been shown extensively. And using the flight stick alone felt so natural. The aforementioned comparisons to Crimson Skies or Panzer Dragoon ring true, no matter what manner of controls you’re using. Moving and shooting is so fluid.

There’s some really great sound design in the game, coupled with the score. A lot of the music is dark, moody, and ambient. It serves as the perfect backdrop to what you’re doing, and appropriately reacts when tensions rise. The rest of the time, especially when exploring, it’s transcendent. 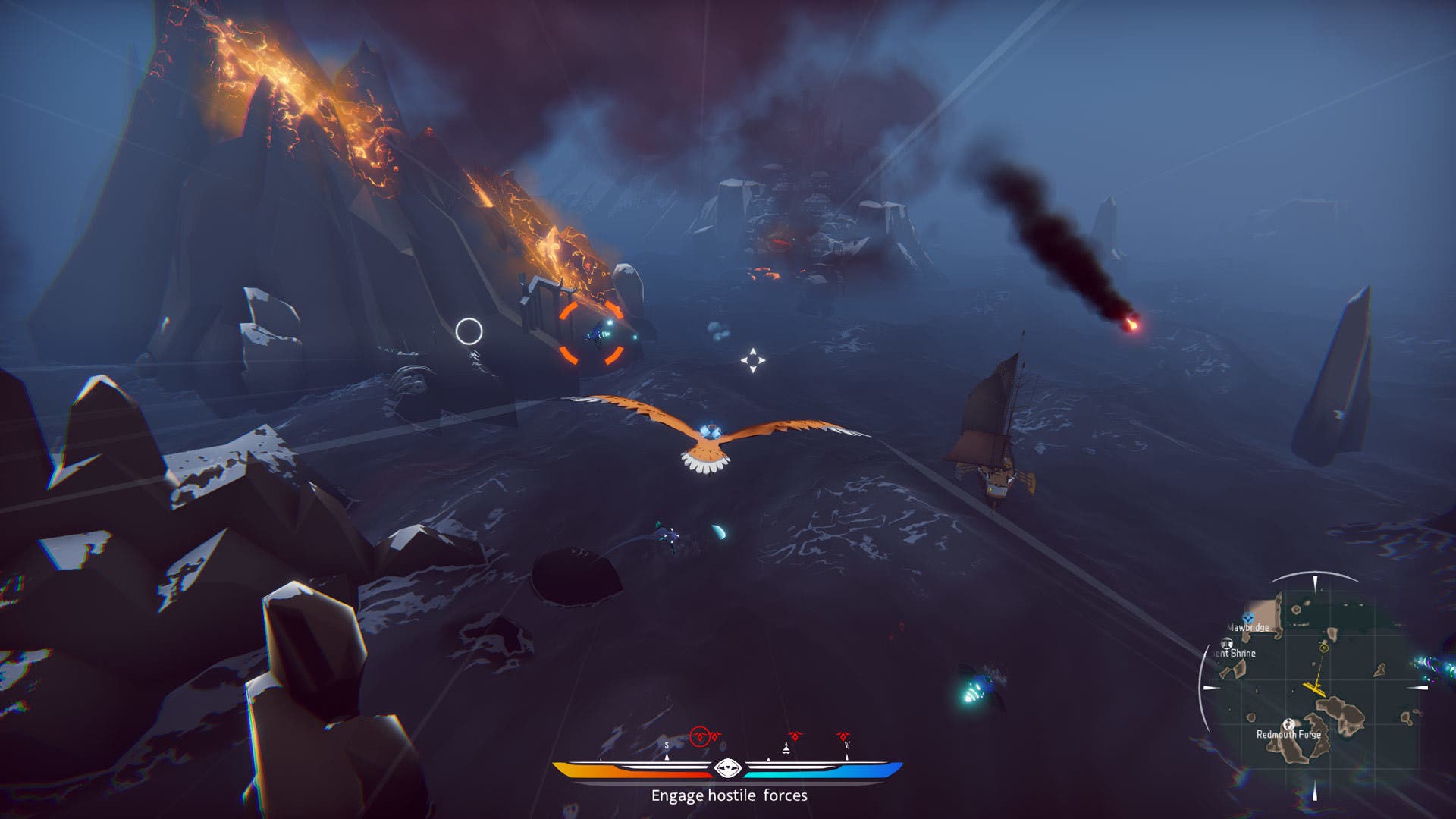 Everything from the colors to the lighting to the fidelity of the visuals is just so jaw-dropping. The clouds are stunning, and seeing the ocean waves crash against the rocks is so gorgeous. When the thunderstorms roll in, you can practically smell the ocean as the air cools. This game has a photo mode, and there’s been never a more perfect game to have it in. As an added bonus, you can turn off the UI while playing to make it more immersive. 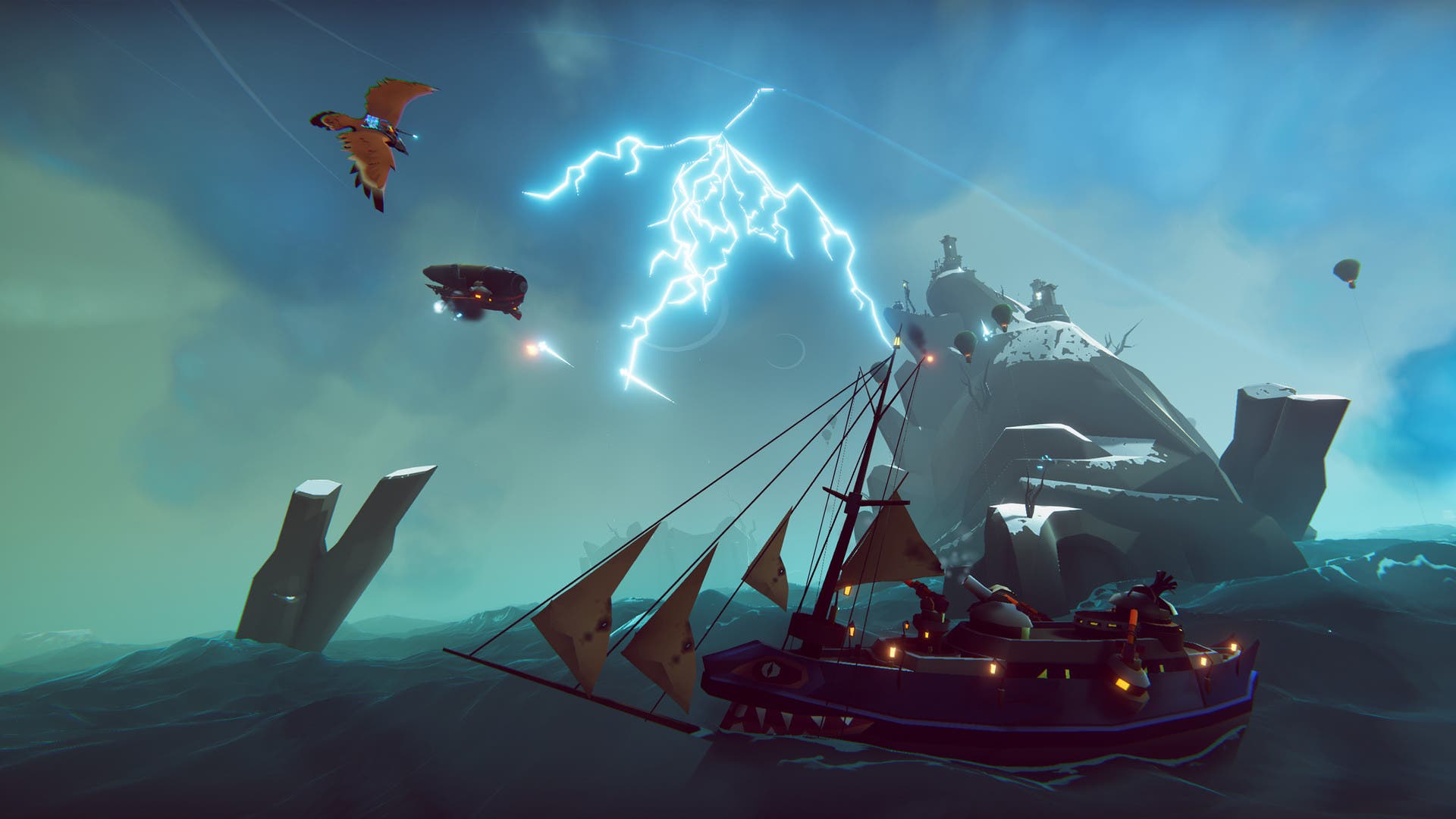 The Falconeer is a stellar experience. While its problems are few, they are drowned out by its strengths in exploration, combat, and being an audio and visual splendor. With well over a dozen hours of content, there’s a world begging to be discovered, and The Great Ursee. The next-generation of gaming is here, and with The Falconeer, there’s nothing else like it.