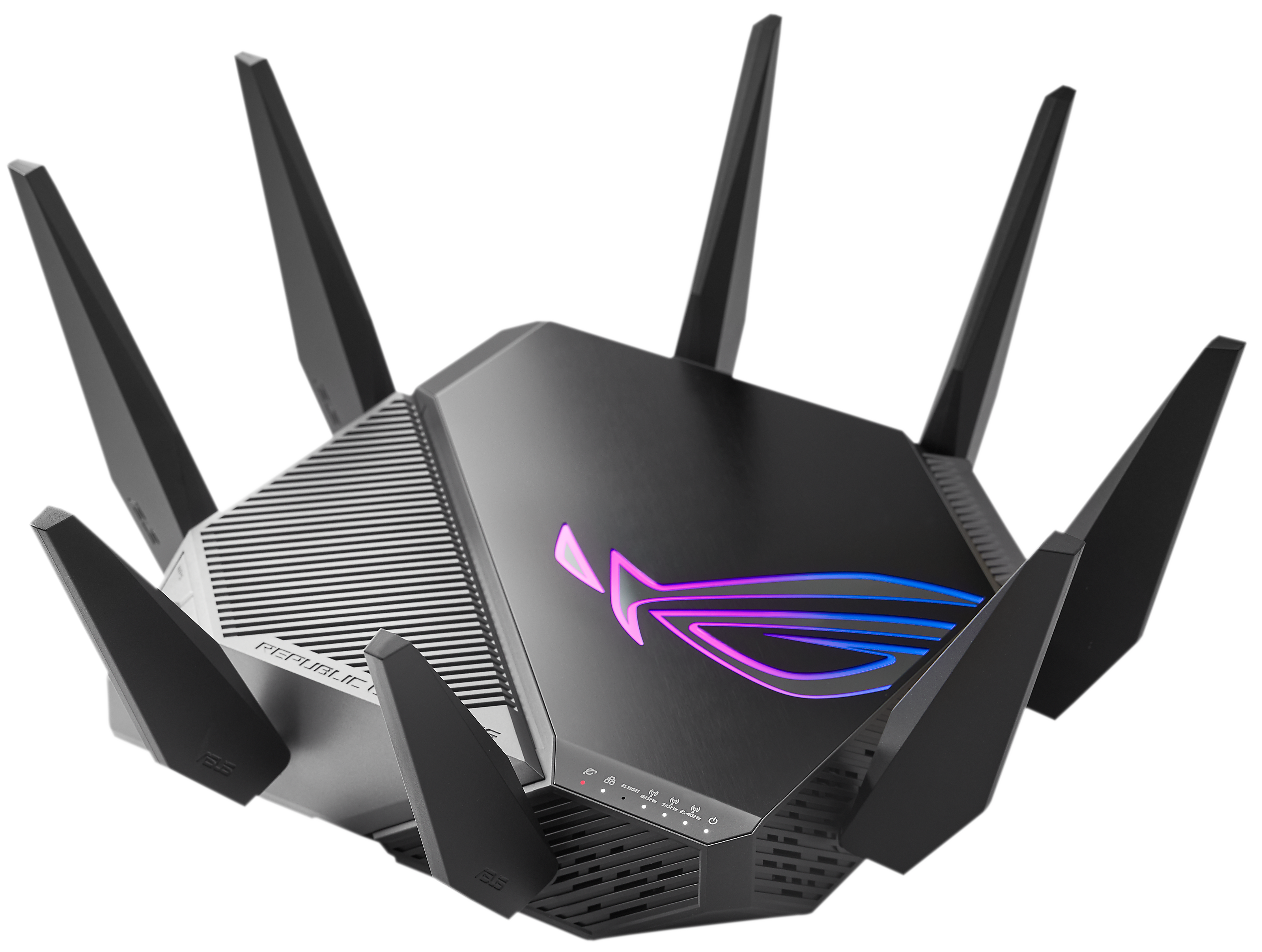 WiFi 6E technology, which fully supports all existing WiFi devices, takes advantage of the newly available radio spectrum in the 6 GHz band. This has 3X more bandwidth than the 5 GHz band, adding up to seven 160 MHz frequency bands to the two available in the existing WiFi 6 standard[i]. WiFi 6E also provides massively expanded device capacity, lower latency, and the 6 GHz band is dedicated solely to WiFi 6E devices in order to maintain high speeds that will not be affected by previous generation devices.

A wide range of WiFi 6E client devices is expected to enter the market in 2021, making GT-AXE11000 the perfect choice for gamers who want to stay one step ahead of the performance curve. GT-AXE11000 demonstrates the ongoing ASUS commitment to networking innovation, with a powerful gaming router that builds on the success of its previous pioneering achievements, which include the world’s first WiFi 6 router.

Tomorrow’s Wireless, Today!
Built for pioneering gamers, the tri-band ROG Rapture GT-AXE11000 supports combined concurrent WiFi speeds of up to nearly 11000 Mbps[ii] — 1148 Mbps on the 2.4 GHz band, 4804 Mbps on the 5 GHz band and 4804 Mbps on the 6 GHz band. GT-AXE11000 also features WAN aggregation for internet connection speeds of up to 2 Gbps, which when combined with the 4×4 WiFi 6 and the 2.5 Gbps WAN/LAN port allows users to enjoy multi-gigabit networking speeds over wired and wireless networks.

Maintaining fast WiFi connections to the latest devices can be problematic if a WiFi network is also shared with previous generation devices. WiFi 6E addresses this by only allowing the latest high-performance WiFi 6E devices to connect to the 6 GHz frequency band.

The 6 GHz WiFi 6E band operates without Dynamic Frequency Selection, a feature that prevents interference with things like air traffic control radar, so devices can connect instantly without the delays imposed by DFS. In the standard 5 GHz band in WiFi 6, 160 MHz channels must operate using DFS, which can slow down the process of joining or rejoining a WiFi network.

To reduce power loss and maximize coverage, ROG engineers minimized the distance between the motherboard connectors and the antennas. A new antenna design optimizes the signal strength in every direction, and each of the eight antennas is well isolated from its neighbors, particular attention being given to the four 6 GHz antennas.

Heat can kill performance, so GT-AXE11000 is designed for efficient heat dissipation. It features extra thermal solder points on the board, precision cut-outs in component shielding to accommodate thermal padding, and a large aluminum heatsink with an increased surface area to significantly improve heat transfer and performance. Specially designed case vents on the top and sides align perfectly with the internal heatsink, and these work with a large bottom vent to create efficient vertical convection for significantly increased cooling airflow.

Powerful Software
For hardcore gaming experiences, GT-AXE11000 features triple-level game acceleration to boost game traffic every step of the way. It includes a dedicated Gaming Port that prioritizes any wired device connected to it, ensuring its data is always at the head of the queue: this lowers ping rates and reduces game latency for an amazing gaming experience.

GT-AXE11000 also supports ASUS AiMesh, which allows gamers to create their own whole-home mesh WiFi system by connecting with other AiMesh-enabled routers, with seamless roaming, synchronized features and centralized control.

All the Benefits of WiFi 6
Any older WiFi devices will still work with a WiFi 6E router, because WiFi 6 is fully backwards-compatible with all earlier WiFi standards. WiFi 6E is an extension of WiFi 6, and apart from the new 6 GHz frequency band, it is based on the latest WiFi 6 technology.

The combination of OFDMA and MU-MIMO technology in WiFi 6 increases network efficiency and capacity up to 4X compared to WiFi 5 (802.11ac), with higher efficiency in multi-device environments. OFDMA allows signals from multiple devices to be bundled together and transmitted simultaneously, reducing latency for a smoother, more responsive WiFi experience.

WiFi 6 also has a feature called Target Wait Time that allows data transmissions to be scheduled, allowing devices such as IoT sensors to sleep for longer periods, and reducing device power consumption by up to 7X for significantly improved battery life.

[i] WiFi 6E availability and features are dependent on regulatory limitations and co-existence with 5 GHz WiFi. The number of available extra 160 MHz channels may be less than 7.

[ii] Unless otherwise stated, WiFi speeds are based on theoretical performance. Actual performance may vary by different test condition and limitation in real-world situations.

AVAILABILITY & PRICING
ASUS ROG Rapture GT-AXE11000 will be available in North America in January 2021 for $549.99 USD. It is listed now at Amazon and will be available at Newegg and other channels soon. Please contact your local ASUS representative for more information. 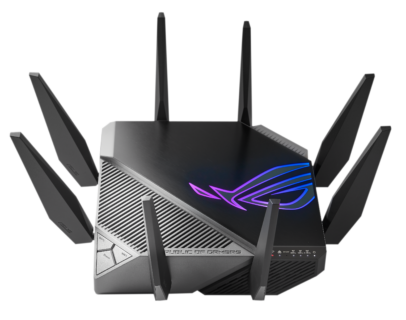 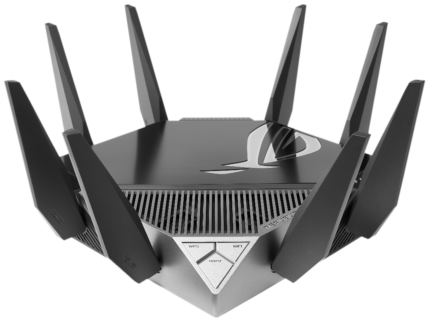 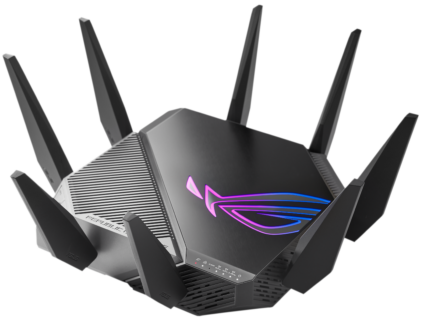