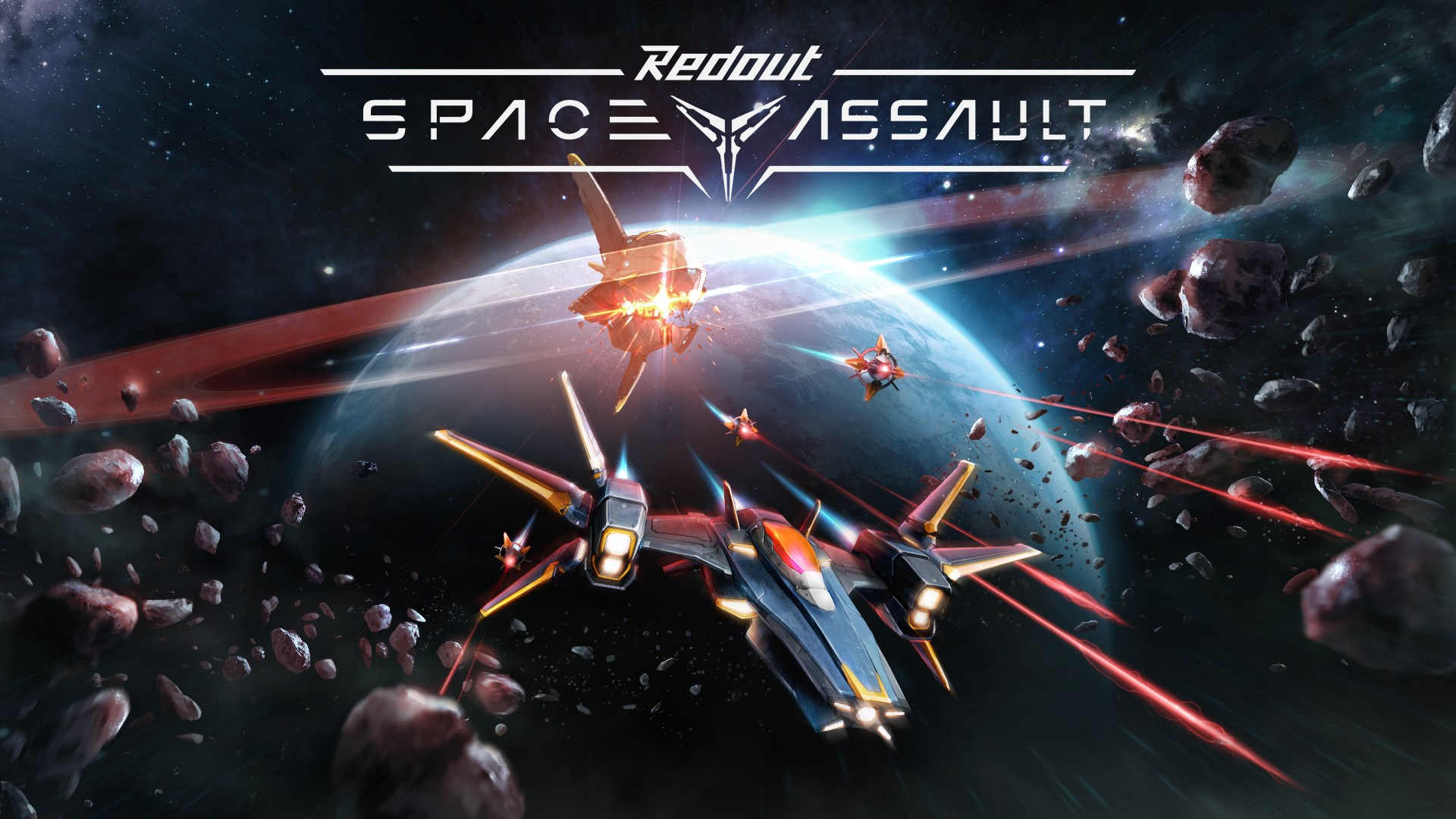 There's fun to be had, but you have to dig really deep to find it. When the game is working, blasting through these levels in just a couple of minutes is the perfect time to be in a level, without it feeling like a waste of time. It's a shame then that it's good moments are overshadowed by so many of its flaws. Redout: Space Assault had the potential to be as exciting as refreshing as 34BigThings did with the original Redout, but instead has shallow gameplay, lackluster visuals, and is riddled with bugs from small to big that showcase that it wasn't ready for the transition to more powerful systems.

Change happens. It’s inevitable in most cases. This is especially true in game development, and Redout: Space Assault from 34BigThings is such an example. What started as a massive space combat game for PC, was shelved in favor of a narrower game that would launch on Apple Arcade. It’s been two years since Redout: Space Assault came to iOS, now PC and consoles have their turn to experience it. And the release has not been worth the wait, at least on PC, as it’s disappointing and a bug-ridden mess. 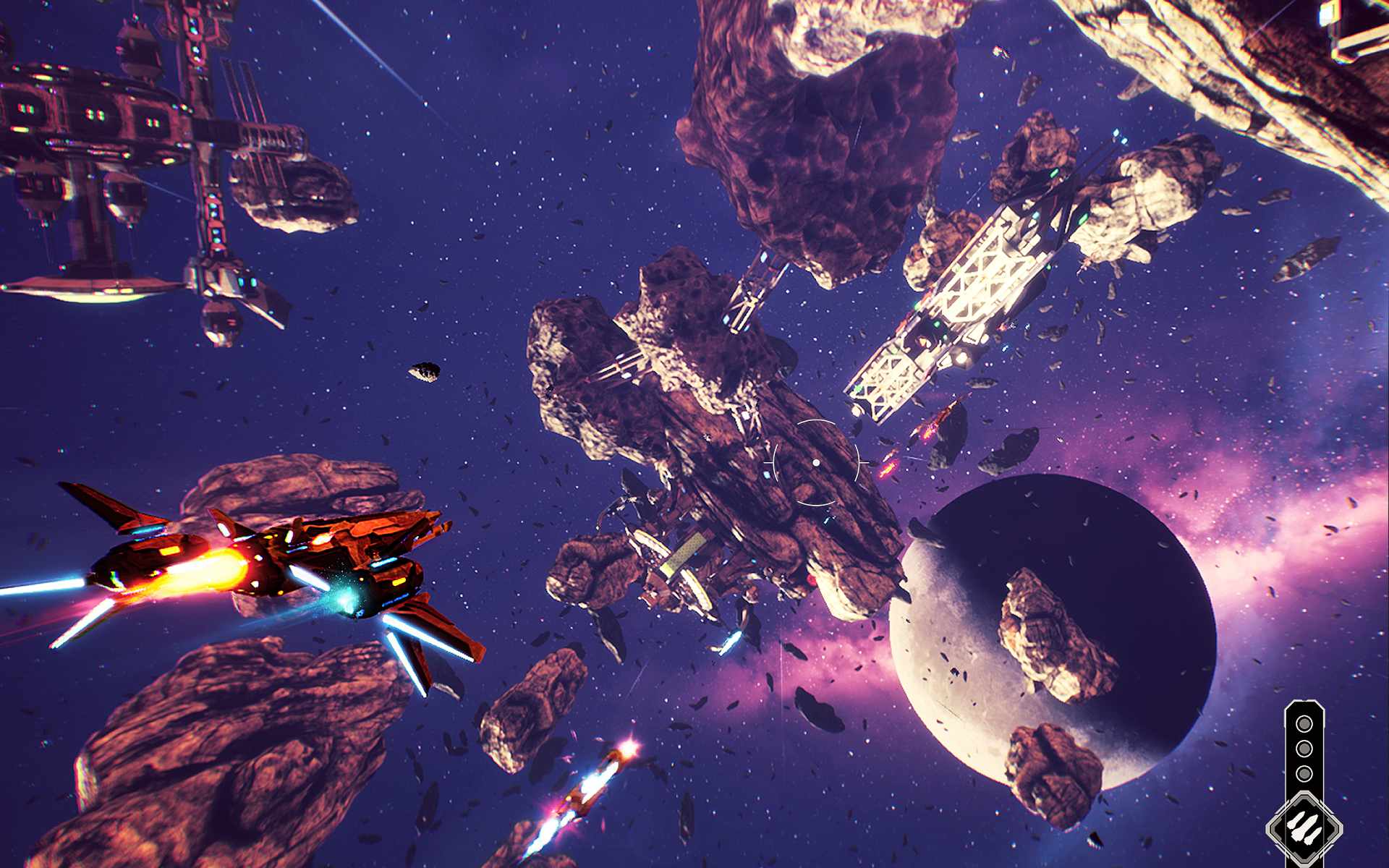 Redout: Space Assault wastes no time thrusting you into the action, teaching you the controls and systems. At first, things are a bit odd as I’m playing on PC with a gamepad, and my primary weapons are auto-firing. Thankfully there’s a setting to turn that off. It makes sense for mobile devices, but not for anything else. I will say that this has already been patched, and now the default for auto-fire is off. The first level was an on-rails sequence, but as you progress through the stages you’ll get introduced to the three other modes such as free flight, races, and boss fights. Sometimes a level will be a combination of two, which is nice but wholly disorienting as the control schemes can change based on your preferences.

I have no issues with the change of direction, but I found the on-rail sequences and stages to be completely off. You don’t have free aim with a cursor. Instead you have to align the ship inside of a small area to shoot at targets, but given that you’re on rails, this feels extremely limited. This is something that Aces of the Galaxy solved back in 2008. The other modes feel a lot better and are more fun to play, thankfully. 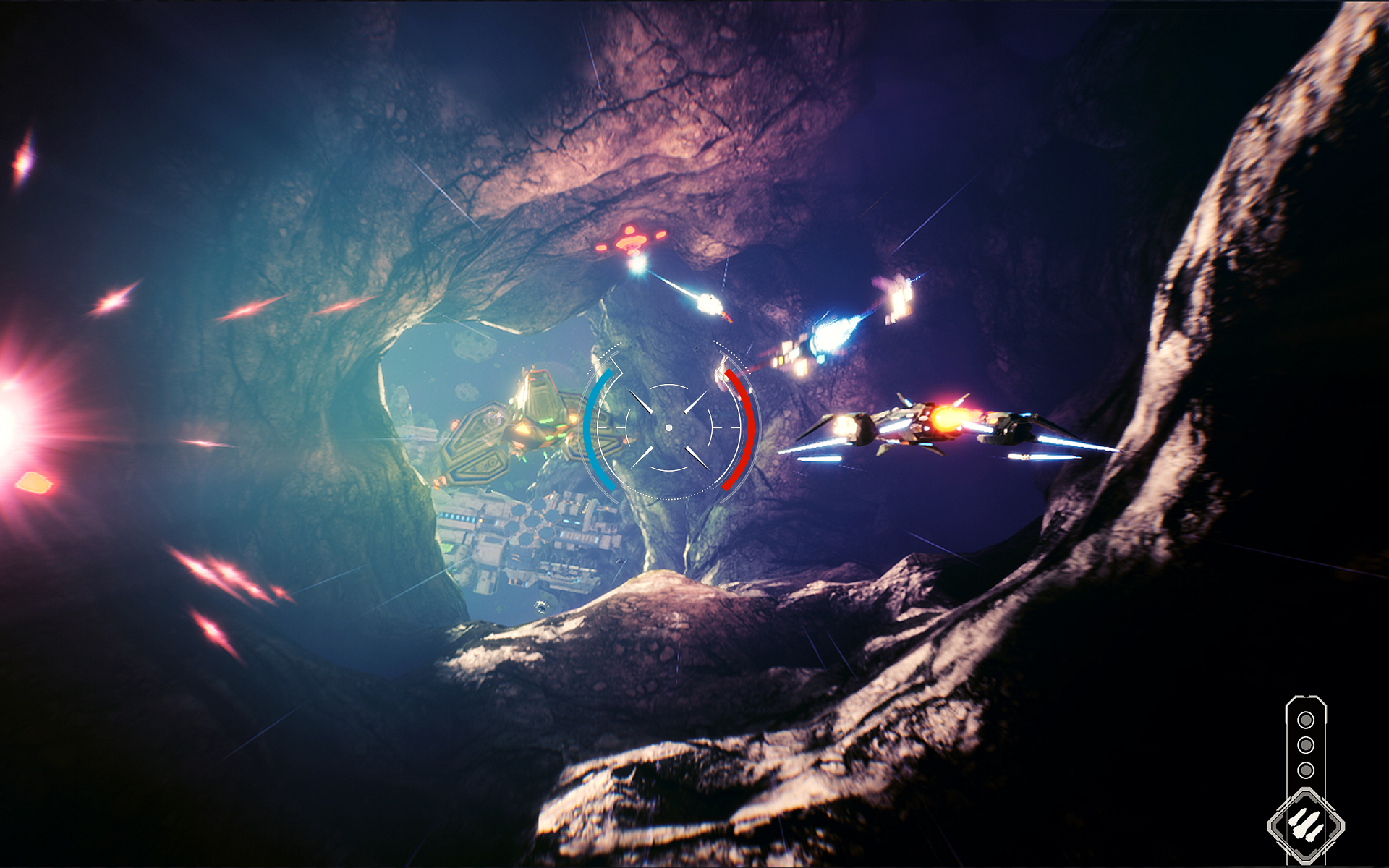 There are three objectives per level. The first is the primary, and must be achieved in order to move on to the next level. Remainder of objectives are considered secondary. These’ll task you with collecting items, finding hidden items, destroying a percentage of enemies, or beating the level under a particular time. Every level’s objectives are achievable, and not always on the first try. There is sometimes a need to upgrade your ship, and return to a prior level to accomplish this.

The game offers upgrades against four systems: hull, shields, weapons, and missiles. You use currency collected or earned through play to enhance their capabilities. The game also deals out cards that can be applied to one particular system. As you progress, rarities increase as do the buffs they provide. As you can only have one card selected, then you must discard the rest. By doing so, additional tokens are granted. So it’s very easy to earn money in the game. All upgrade slots max out at level nine. It’s also here where you can select from a healthy amount of skins for the ship, as well as color schemes. It’s a straightforward system, but it does the job of making you feel more powerful as you advance. 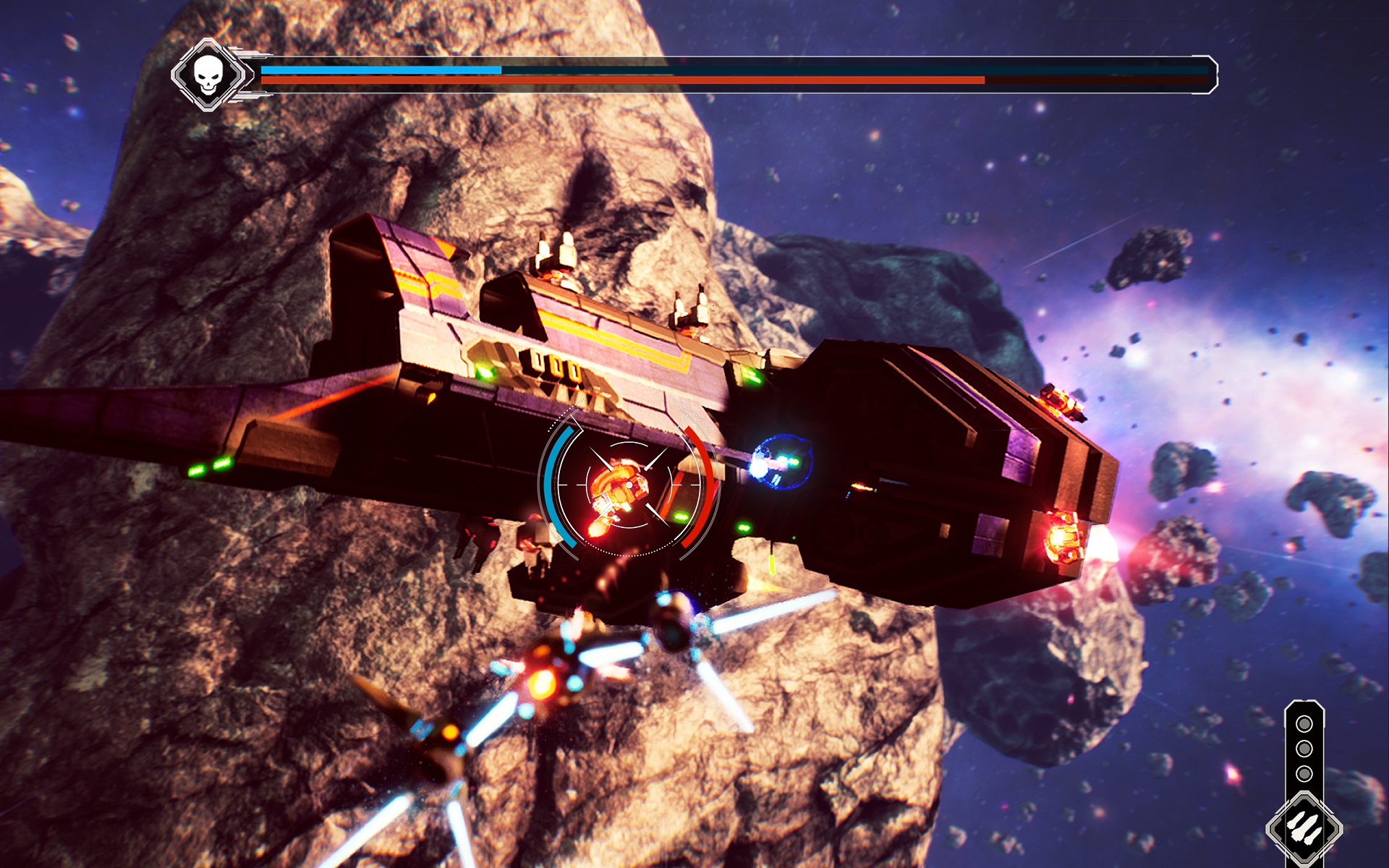 There are nine chapters, with anywhere from four to seven levels within each. So you’re looking at around six hours to complete the game, with some grinding for tokens to get the last of the upgrades. I can’t say there was ever a memorable level, as everything looked too samey. I will say that the person of color representation was good, even if the voice acting . There’s a surprisingly good soundtrack in here, especially in Chapter 5-4 where it really hit for me.

I feel like a lot about what I don’t like about Redout: Space Assault is due to the Apple Arcade limitations. It seems there wasn’t that much done in bringing this to PC and consoles. The controls feel good, I only had to invert Y axis for free flight, as normal is fine for the on rails sections. But the visuals are underwhelming, even compared to the original Redout. There’s a grime, excessive amount of blur, and low-quality textures despite everything being set to “Epic”. I feel like the developers were being especially cheeky as the install size for the game comes in at a perfect 13.37GB (that’s “leet” for you younger folks). Whatever’s going on with the look of the game, it’s not as crisp as I would have liked it to be. 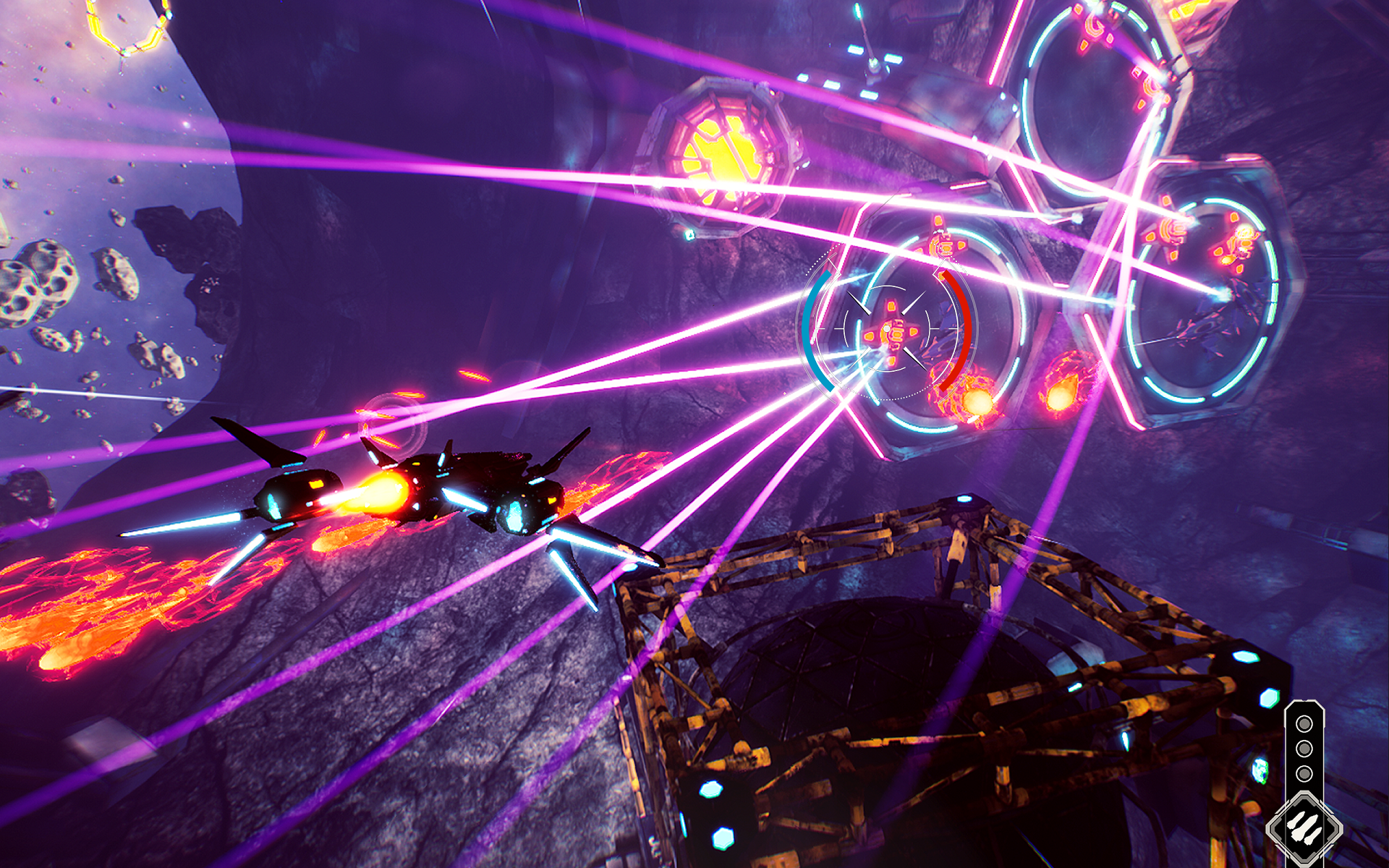 I was not joking when I said there were bugs. I’ve encountered nearly every kind, some of them are game-breaking, others not. In the week I’ve been playing it, there’s been no patches to address them. For some reason, the game automatically enables HDR when you boot the game up. The implementation on PC is sub-par, at best. Everything is dim and desaturated. I was able to get around this by modifying the NVIDIA Control Panel’s color settings, but there’s no setting to turn it off – though the developers promise that’s coming soon.

I’ve had the camera get stuck on objects, and my ship flies off in the distance. In some levels, a simple restart fixes it. In other cases that doesn’t work, and it turned out I was supposed to shoot a ship way off into the distance that my missiles wouldn’t lock onto. Then there’s the objectives not updating with progress, especially on the ones where you need to kill a percentage of the enemies on the level, some are completely broken in attributing that achievement to you. Most of these don’t make the game unplayable, but it quickly becomes very unfun to continue. 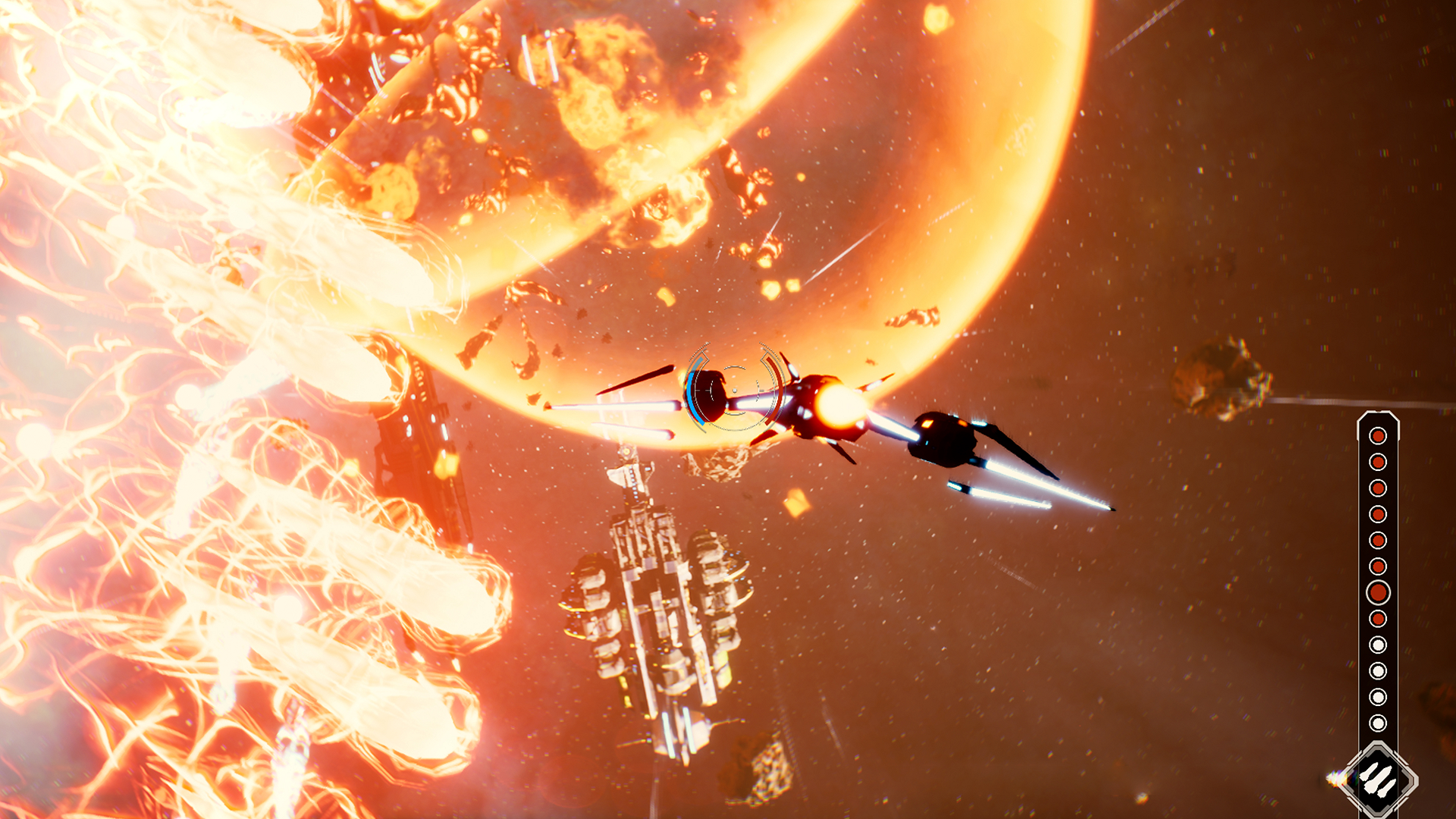 There’s fun to be had, but you have to dig really deep to find it. When the game is working, blasting through these levels in just a couple of minutes is the perfect time to be in a level, without it feeling like a waste of time. It’s a shame then that it’s good moments are overshadowed by so many of its flaws. Redout: Space Assault had the potential to be as exciting as refreshing as 34BigThings did with the original Redout, but instead has shallow gameplay, lackluster visuals, and is riddled with bugs from small to big that showcase that it wasn’t ready for the transition to more powerful systems.