It's fair to say that RetroMania Wrestling achieves in making the sequel it wants to be by having the gameplay, pixel art, and sound that feels like it came from the SNES era for wrestling fans -- albeit for those who follow more wrestling that isn't WWE. The roster is shallow, and may not be what you want or expect, but it does have talent worthy of being here. The story mode is incomplete, and the flow of combat is often interrupted - these are the real problems. Yet, I can't help but enjoy everything RetroMania Wrestling has to offer here, even though it doesn't have staying power.

RetroMania Wrestling has been given all the blessings to be the official sequel to 1991’s WWF Wrestlefest. In the thirty years since that game, a lot of superstars have come and gone that could appear here, but don’t. And despite its sequel status, the limited roster keeps it from being larger than life even though it’s filled with notable names. From a visuals and gameplay standpoint, RetroMania Wrestling stands tall; and that should be enough to land the finisher, but it gets too gassed to pull it off.

RetroMania Wrestling is a technical arcade brawler that replicates the look and feel of WWF Wrestlefest with excellent precision. This is a game meant to be picked up and played by anyone. The controls are simple in that there are three types of attacks: light, medium, and heavy. You can run and climb, taunt, and tag out. These systems, used in conjunction with cardinal directions will result in any given wrestler’s moveset to be utilized like DDT’s, hurricanrana’s, Irish whip’s, and more. It’s easy to play, but there’s a slight learning curve in discovering how each wrestler plays and what their strengths and weaknesses are. This is all bolstered by the momentum meter, which is essentially an adrenaline bar built from successive attacks. You can then execute more powerful moves that will do higher damage and doesn’t deplete unless you take damage. It all works so well together, and once you master them, allows you to have more fluid and dynamic matches.

The game’s roster is solid but may not have grand appeal for the casual observer. Of the sixteen wrestlers available today, The Road Warriors Hawk and Animal are the only ones to come over from the original game. The rest is made of indie wrestlers, with most of them recognizable more for their WWE names past or present. You’ve got Matt Cardona (Zack Ryder), Brian Meyers (Curt Hawkins), Johnny Retro (John Morrison), and Big Stevie Cool (Stevie Richards). The rest of the roster are indie superstars that are a part of All Elite Wrestling (AEW) like Jeff Cobb and Austin Idol, or still on the indie circuit like Tommy Dreamer, Nick Aldis, Zack Sabre Jr, and Warhorse. Having the entirety of the Blue World Order here is a deep cut of wrestling. So for many, this will make or break whether you enjoy the game or not. Whether it be a fighting game or a wrestling game, the roster is everything. I think what’s here is really solid, but it just doesn’t have the same curb appeal as Wrestlefest‘s roster, or anything from the WWE-licensed games. 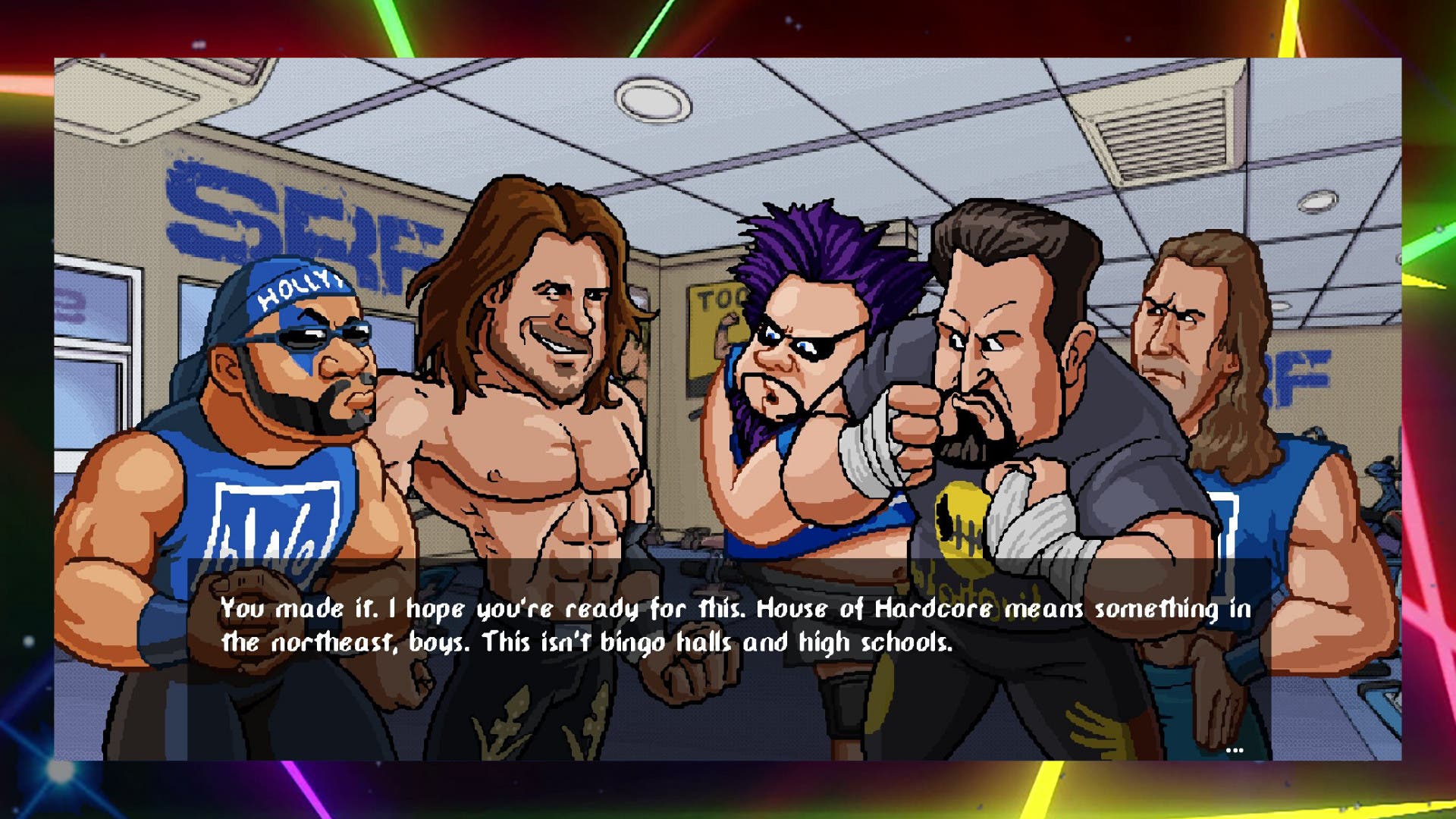 The game’s story mode is the first item on the menu, and it focuses on Johnny Retro’s injury and rehabilitation back to fighting again. You’ll climb the ranks in the House of Hardcore and National Wrestling Alliance (NWA), while coming across each of the wrestlers in the game’s roster and names in the wrestling community and journalism. Now, I found the dialogue stilted at introducing people, where it assumes you aren’t able to recognize their caricature from looks alone. I mean I get why it is the way it is, but it’s still not the best. Throughout the story, you’re given dialogue options to make certain choices, this allows you to shape Johnny Retro as a face, a tweener, or a heel. It’s a very simple system, but it does the job for a little roleplay. It’s a very short story that runs its course, but unfortunately ends on a cliffhanger without a proper resolution. It’s very much a wrestling thing to do, but just feels incomplete.

The secondary mode RetroMania Wrestling is 10 Pounds of Gold, where you’re chasing the NWA Championship through a series of linear fights. This can be equated to the towers in a Mortal Kombat game, but there’s no randomization at play here. You can take all of the game’s roster of talent through this mode so that they each acquire the gold. Next is the Retro Rumble, which puts sixteen wrestlers in the ring at the same time. It can be easy in matches like this to lose where you are, but there’s a feature in the settings to put a colored circle under your character, which I found immensely helpful. The mode plays out just like royal rumble, but weirdly you must pin your opponents to win rather than throwing them over-the-top rope, which you can most definitely do. It’s a weird choice, but ultimately fine.

There are different match types of varying degrees like eight-man tag, four way, and singles matches. Then there’s the seventeen arenas that take place in the House of Hardcore, Hell, or something more comforting like the Beach. There’s many wrestler-themed arenas, with even one dedicated to ProWrestlingTees.com, they all each have their place and feel different from one another.

RetroMania Wrestling is at its best when matches are kinetic and the crowd’s reactive, but it’s at its worst when the AI is mean and unrelenting. There’s ways to turn down the difficulty, and turn up second wind chances, but the stock game can be harsh at times. Thankfully there’s customizations to allow you to make it as hard or as easy as you’d like. It’s a game that prides itself on its accessibility, and it certainly benefits from that. 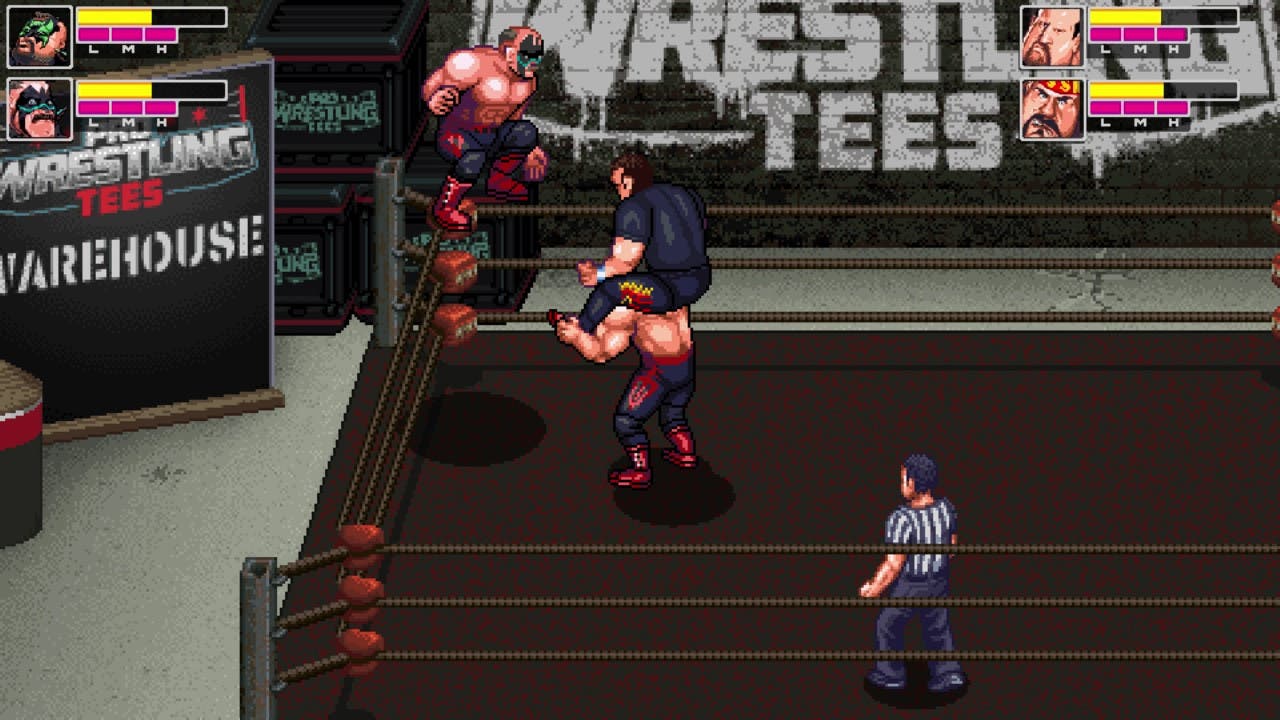 There’s a versus mode that serves as to create the exhibition matches of your dreams. It’s great for watching the AI battle it out. You can set the rules and dial in settings from time limit, to whether its a cage match or not, to falls count anywhere, and how long to count for a ring out. It’s here where you can play locally, too.

All too often the game asks you to button mash your way out of a back-and-forth, but then you’ll transition into a move that requires momentum, but the move will be executed “too early” as you were just button mashing. I don’t know how to better read these interactions, but it’s a constant problem I could never get past. Additionally, the implementation of 2D has its issues, like trying to line up a running attack as it’ll often miss. 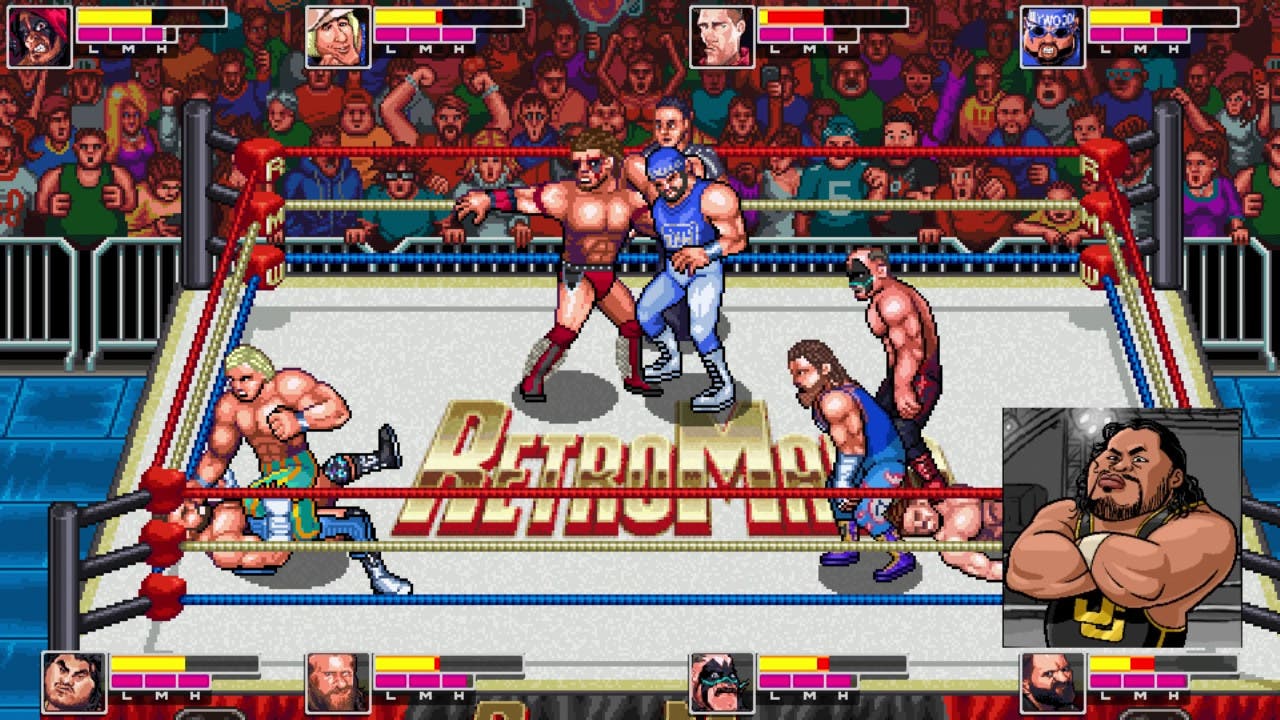 It’s fair to say that RetroMania Wrestling achieves in making the sequel it wants to be by having the gameplay, pixel art, and sound that feels like it came from the SNES era for wrestling fans — albeit for those who follow more wrestling that isn’t WWE. The roster is shallow, and may not be what you want or expect, but it does have talent worthy of being here. The story mode is incomplete, and the flow of combat is often interrupted – these are the real problems. Yet, I can’t help but enjoy everything RetroMania Wrestling has to offer here, even though it doesn’t have staying power.