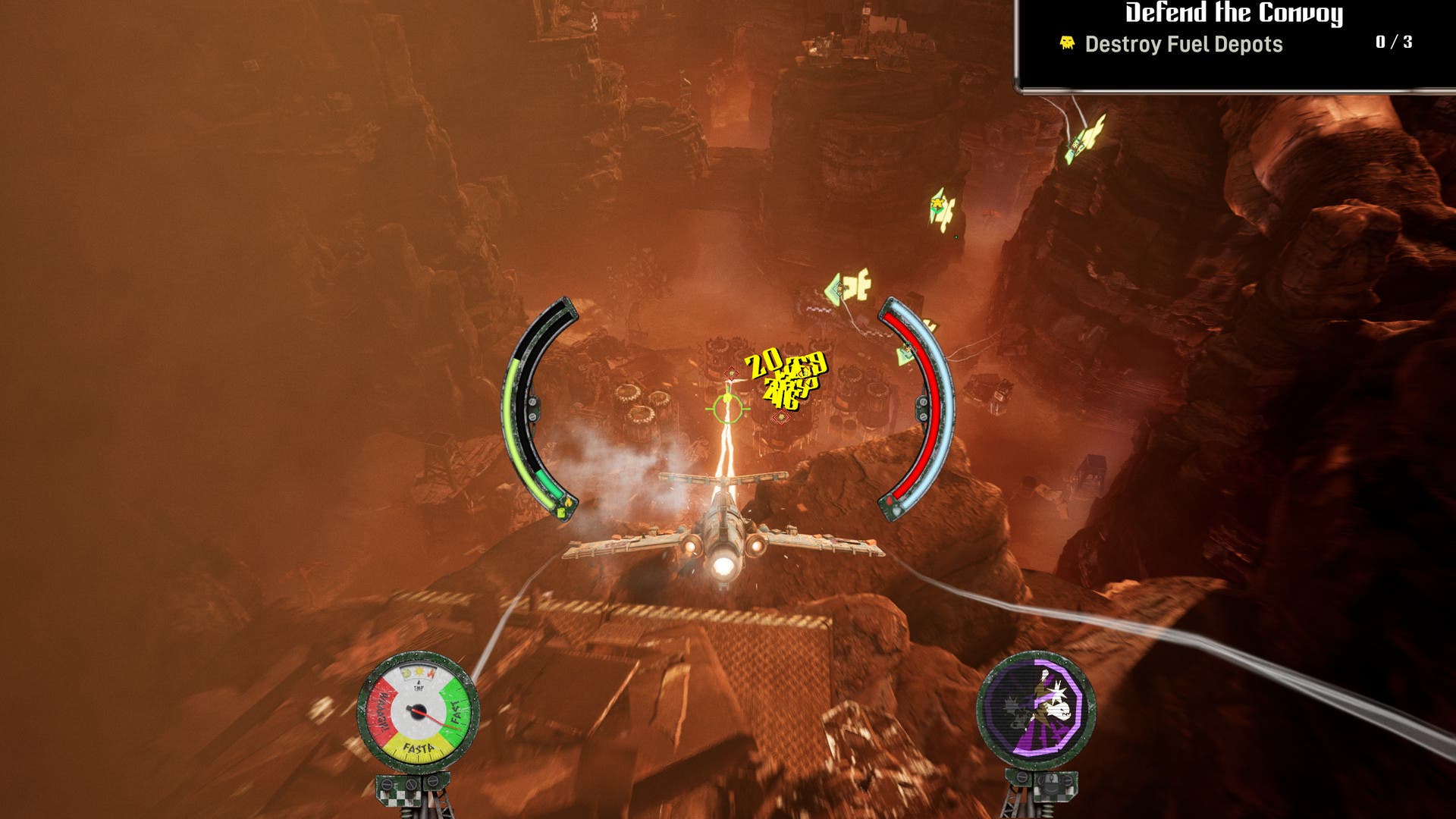 This one's is on the cusp of being something cool, but its origins on mobile doesn't make for a good port to PC. It's not a bad game, just one that's lacking in just about every regard. However, when the friction is at its least, then there's mindless fun to be had. Warhammer 40,000: Dakka Squadron - Flyboyz Edition is fun in ways Warhammer 40K games usually aren't thanks to the aerial combat, but it needed to be so much better than this.

Arcade-style dogfighting games are a rare find these days, and coupled with taking place in the Warhammer 40K universe — this one’s a unicorn. With Warhammer 40,000: Dakka Squadron – Flyboyz Edition, Phosphor Game Studios has brought their mobile game to PC, though the transition is a bit rough. The game’s controls are not standard, sounds clips often repeat, and mission objectives are rote. Thankfully, Orks are arguably the best thing in anything Warhammer, which might keep things entertaining long enough to see what this has to offer — maybe. There’s no real story or setup for the things going on here, you’re just a lowly Flyboy for the Orks to start working your way up through the ranks. You’ll choose a faction, and enter into a campaign for each. You’ll play across five different planets over 20 missions. They all can be broken down into three categories: attack, defend, and escort. Sometimes all in one mission, or some combination of the two. The missions aren’t very long, but if you die due to the fiddly controls, you’ll have to replay the entire mission over and lose upwards to 15 minutes. The game lacks any sort of checkpointing to get you through them. It’s also weird how boxy these arenas are, and each planet is some variation of the same set you just fought on in the previous mission.

There are primary objectives to complete, with secondary objectives for bonuses to be awarded at the end. Some of the secondary objectives are rather laborious, like downing 42 planes (what an oddly specific number, that) or completing a mission under a certain time. The missions themselves are anywhere from ten to fifteen minutes, and often overstay their welcome. When the mission is complete, you’ll collect victory points, teef, and other items to equip on your aircraft – more on this later. I can’t say the rewards on their own are exciting, but as you accrue more then it becomes more fun to experiment with updating your aircraft. 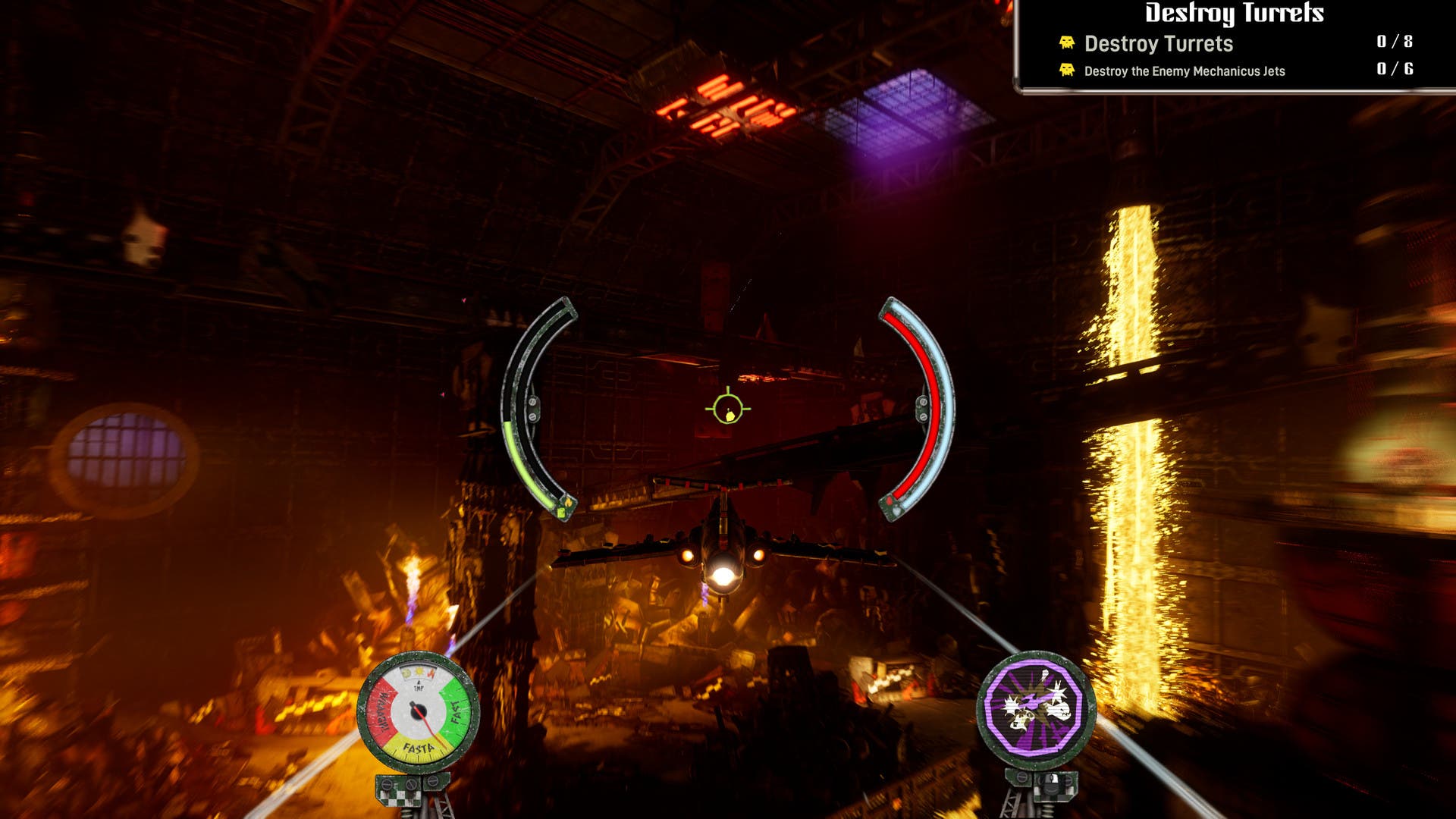 Dakka Squadron – Flyboyz Edition has some really loose handling for flight. In fact, I’m not entirely sure you could even call this a flight model, even for an arcade-style game. It’s really bizarre how it behaves and reacts. I found comfort with a gamepad, but the keyboard and mouse controls work really well, too. However, you’re able to do 180s with a simple button press, and other aerial maneuvers easily. There’s some simple rules to follow as you engage in combat. First, shooting generates heat. Generate too much of it, and you have to wait for your weapons to cool. You can boost to dissipate the heat, but that will leave you vulnerable to enemy fire if you deplete it all. Then there’s your health and armor, it will regenerate over time, but you must not be taking active damage in order to replenish it. All of these systems work really well in concert with one another, and there’s a little risk vs reward for how you engage any of them.

It isn’t until the second planet where you’re equipping and using secondary weapons like rockets (or rockitz in Ork-speak), but they add a tactical advantage you notice was definitely missing before. On a generous cooldown is your ultimate ability. It’s a barrage of fire from all your guns at once to take down swaths of enemies, or heavily armed targets. It’s a great utility, but I found myself killing a single enemy and having difficulty chasing down other targets like planes to down. I just wish it felt as good as it sounds to use. There’s a hangar where you’ll unlock different types of craft, each with different layouts and use cases. You can slot new weapons and gear that will improve airplane stats like heat management, barrel roll efficiency, and more. While you’re given a lot of freedom to design as you please, weight is a concern. I never got into a situation where I was too heavy to equip what I wanted, but it did affect things like acceleration and top speed. It’s an interesting system that doesn’t really do much to enforce anything in either direction. 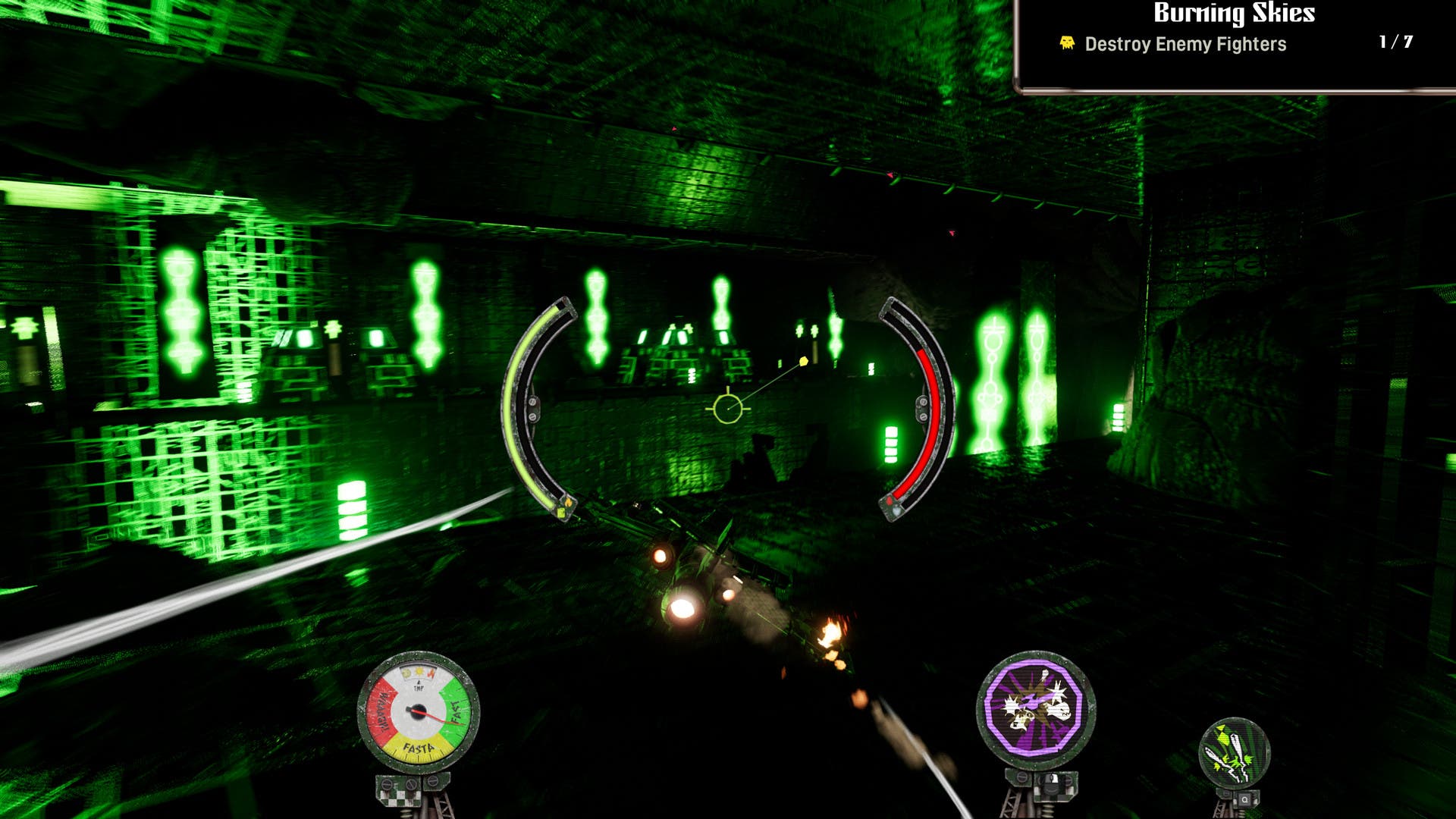 Dakka Squadron‘s camera needs to chill out. Every time I make a movement like turning, pulling up, or diving down, it adjusts the field of view. This especially problematic if I’m making micro adjustments in flight, it never was bad enough to get me motion sick, but it is egregious how bad it adjusts. If anything, this should be on some sort of delay before altering the field of view for perceived speed. There’s also times where I audibly laughed because the AI was bouncing off of a force field or a wall; they’re really not bright. Most annoyingly, are the repetitive voice lines that your squadmates will spout endlessly throughout. It’s so obnoxious, and I can hear it in my sleep.

There is a multiplayer component to the game, but it’s impossible to play without friends due to the low population of those playing the game. Wildly, Dakka Squadron – Flyboyz Edition supports a maximum of 60 players, which is really impressive and would be an absolute riot. There seems to be only one mode for playing: Airbrawl, which is just deathmatch with a time limit. The win conditions are to reach the kill limit, or have the most kills when the timer reaches zero. With ten maps to play on, this would be good for a game night. 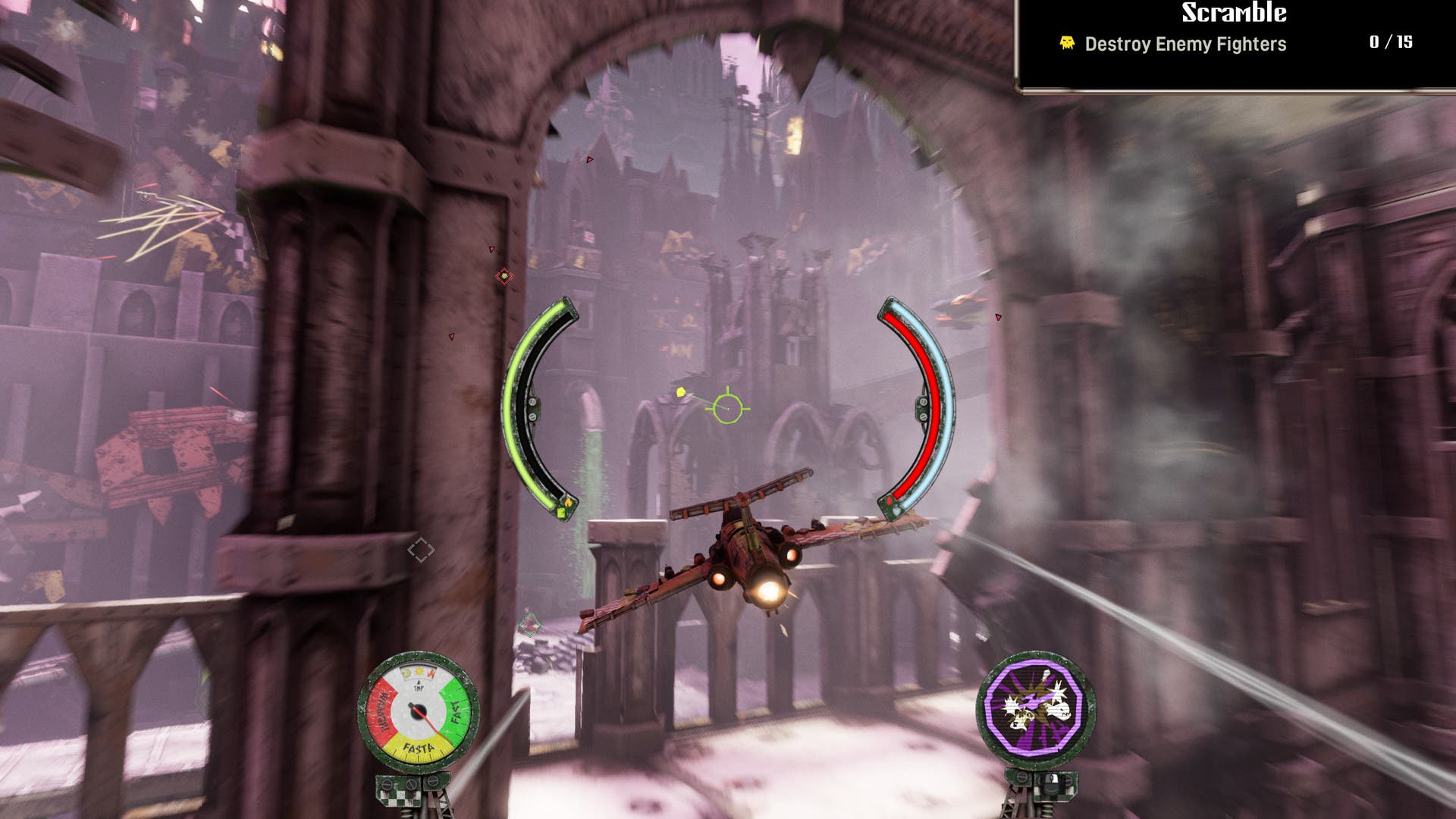 This one’s is on the cusp of being something cool, but its origins on mobile doesn’t make for a good port to PC. It’s not a bad game, just one that’s lacking in just about every regard. However, when the friction is at its least, then there’s mindless fun to be had. Warhammer 40,000: Dakka Squadron – Flyboyz Edition is fun in ways Warhammer 40K games usually aren’t thanks to the aerial combat, but it needed to be so much better than this.