While it may not hold the same prestige it once used to, the Stronghold series is still one of the best. It offered sieging and defending within a real-time strategy wrapper. Firefly Studios returns with the first new Stronghold game in over five years with Stronghold: Warlords, offering an exciting new direction. While less of a sieging kind of game, and more of a traditional real-time strategy game, there’s a foundation laid here that Stronghold: Warlords shows a lot of promise for its future, and possible sequels. 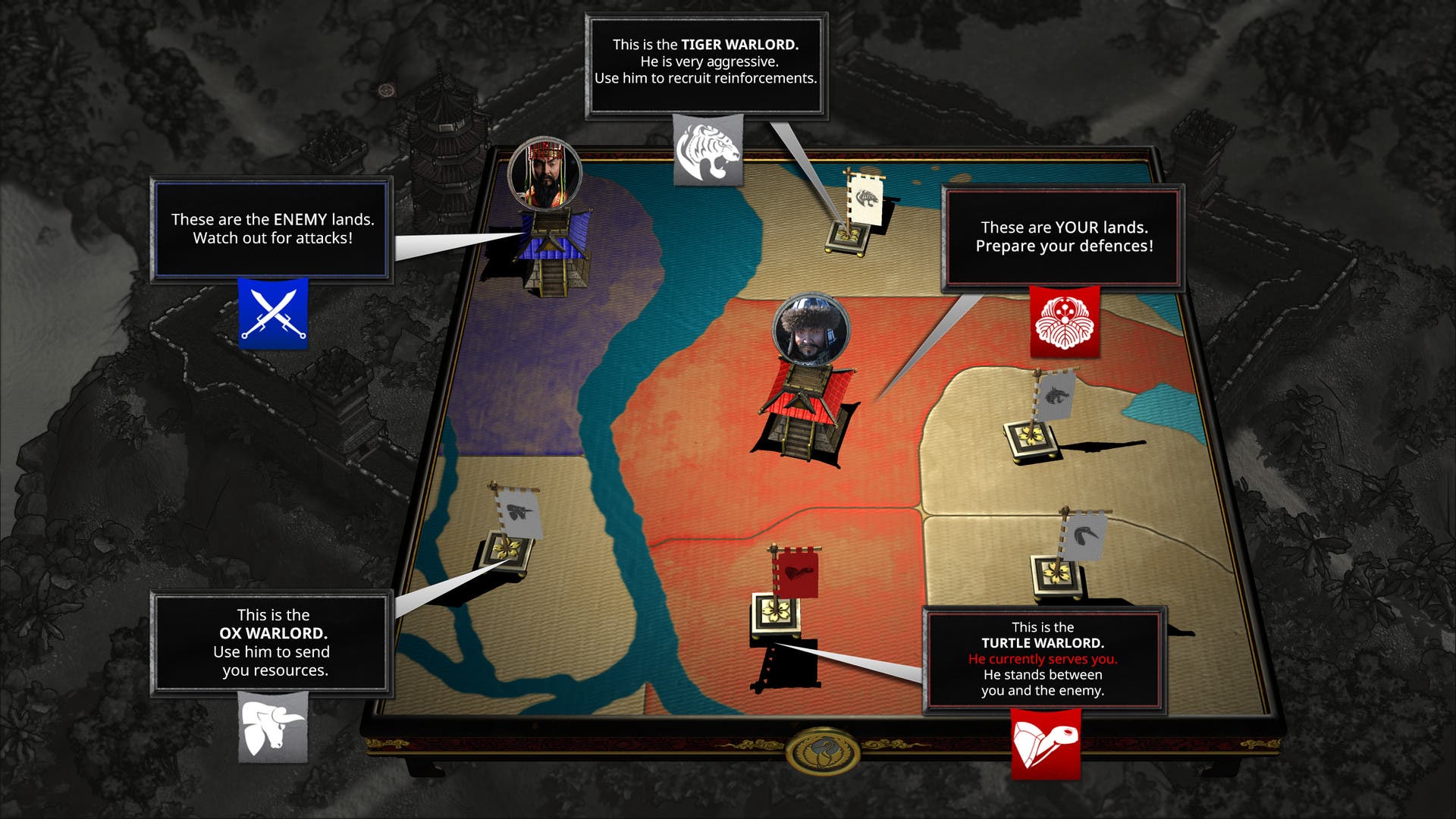 As the title implies, the core of this game is all about warlords. They’re a hero unit that can be taken by force or through diplomacy. You yourself can only be taken by force, but any other warlord can be taken by you with either means. And in actuality, the warlords that are not you can be taken, then re-taken by an enemy ad infinitum. This constant back-and-forth gets old rather quick. Oh, and any warlord you take hold of, doesn’t allow you to build in their zones – and that’s silly. Diplomacy is another new system here, and you’ll earn points by having a consulate or embassy in your stronghold, and by capturing other warlords. You can do a diplomatic takeover using your accrued points, and distribute them manually or automatically. Once a threshold is reached, you can cash in for favors, shipments of goods, or issue attacks on the remaining warlords. Overall the system is not essential to the gameplay, and gets in the way most of the time.

The gameplay loop is simple from the outset: build, conquer or use diplomacy, and siege. But there’s two games going on at once. One is where you’re fighting battlefield warfare out there, and the other is that you risk getting overthrown at home if you’re not building up defenses, keeping your people happy, and making resources. The fighting part can be fun, but combat is often sluggish. With higher tier enemies being even slower than their weaker counterparts, it makes you wonder if they’re worth the investment. There’s a lot of systems at play, like spinning plates, and this becomes a game that’s very demanding, and feels hard to win. There’s a sprawling campaign that has five warlords, with six to seven missions each. Since this is set in Eastern Asia, you’ll fight across China, Mongolia, Vietnam, and Japan. Each campaign is dedicated to historical figures like Genghis Khan and Thuc Phan, to name a couple. They each represent a different country and era in time, giving you the creative freedom to rewrite history. So to do their weapons vary, you even get to experiment with gunpowder. There’s even an opportunity use ninjas to scale the walls, but they feel like such an odd choice juxtaposed with everything else. I found the missions at their best when you’re just sieging, as the game starts you off with you on your way to take over a stronghold. There’s nothing wrong with the rest of it, but it’s just what you come to this series for.

More than any other RTS, the campaign feels like training for the multiplayer. That’s not to say the campaigns are bad or boring, there’s a story arc in each to tell, but not a very interesting one. There are briefings before each mission to give you context and background to the warring that’s going on. There’s also a hints page to help you for what lies ahead, and as far as I can tell there’s no penalty for using this system to reveal all the hints to you. Each campaign mission has win conditions, like: collect certain items, repel an invading force for twenty minutes, capture all warlords on the map, things like that. The lose conditions are just: don’t die. Yeah, sure, I can get behind that. There are so many times that during these missions, enemies will all too often materialize out of thin air, separate from their largest base and work to disrupt you and your hold on the warlords. It’s a really cheap tactic, and I don’t like any part of it. Too many times I’ve lost a match, but then knew exactly what I had to do to win, and would get it on the second try. I think even with the hints system, there’s just not enough information given to the player for what to expect. There’s a separate economic campaign to go through, with its aim to make you more frugal and thoughtful about your choices that hardly involve combat at all. These missions will also give you the least amount of space to work with, either by giving you hard objects that cannot be cleared or soft objects that can. Either way, you’ll have to be dealt with the space given to you, and make the best of it. Where landmass is very sparse, it becomes very challenging very quickly. The game will introduce new types of problems that aren’t other warlords, and instead things like drought which will affect your crops through economy and keeping your people fed. It’s a really interesting campaign that teaches you things that never comes up elsewhere.

For whatever reason, you have the choice to be an unkind or benevolent warlord. Besides taxing your people, you can treat a them with theaters or worse, send them to a torture rack. There are reasons you would do this. If you are feared, they won’t like you but will work harder. If they like you, they won’t work as hard. You have the choice to min/max their happiness or unhappiness. For instance, you give them high taxes to earn more gold, but if you allow them to eat more rations so long as you have enough in the granary, then that is a tradeoff I’m willing to make for the green happy face on my UI. It’s just a weird system that I don’t think is as fully fleshed out as it should be.

It wouldn’t be a real-time strategy game if it didn’t have Skirmish and Multiplayer modes. In Skirmish, all factions are available with all units unlocked. There’s only eight maps at launch, with different maps catering to certain numbers of players. These maps span all of the locations found in the campaign, with larger versions of certain missions. Multiplayer is not much different than Skirmish, except that you can join a game in-progress. Both modes offer the same settings in terms of starting resources, gold, diplomacy, and whether advantages are weighted towards computers or players or evenly distributed. In Multiplayer only, you can also decide whether trebuchets or ninjas will be allowed. Both Skirmish and Multiplayer will be provide longevity in Stronghold: Warlords, which will be bolstered by the use of the map editor provided by FireFly Studios on day one.

There’s also a Free Build mode, which just lets you build to your heart’s content, but you’re still beholden by the game’s rules of needing to build using the resources you earn. It’s not free as in unlimited, but you don’t have to worry about warring factions or the warlords system. It’s aimed for the more creative types, the ones that want to share their creations without restrictions.

Stronghold: Warlords is a pretty and colorful game, but can look dated in most scenarios. It does look good at night, and even when it’s raining during a torrential storm. There aren’t many or detailed graphical settings, but it does the job and depending on what’s on-screen can run anywhere from 90fps to 165fps (my maximum). There’s some oddities in the game, like there’s no ability to quick save. And the UI could really use some work, as it can be really confusing, and isn’t the best laid out. This is especially noticeable in the campaigns where it doesn’t show you which campaigns are completed, just shows you what one you’re currently one. It does grey out campaign missions that are inaccessible, but I feel like this could be improved. But in my time playing the game, I didn’t experience any bugs or anything game-breaking.

Stronghold: Warlords gets more right than it doesn’t. The unique East-Asian factions that this game provides is a much needed change from the medieval times we’re used to. It’s more RTS than fans of the series will bargain for, and the warlords system is interesting but has its fair share of issues. The game’s attractive pricing should sway anyone on the fence. Stronghold: Warlords is refreshing take on the Stronghold series, but doesn’t quite execute on its new ideas fully — it’s a bit outdated, but not antiquated.