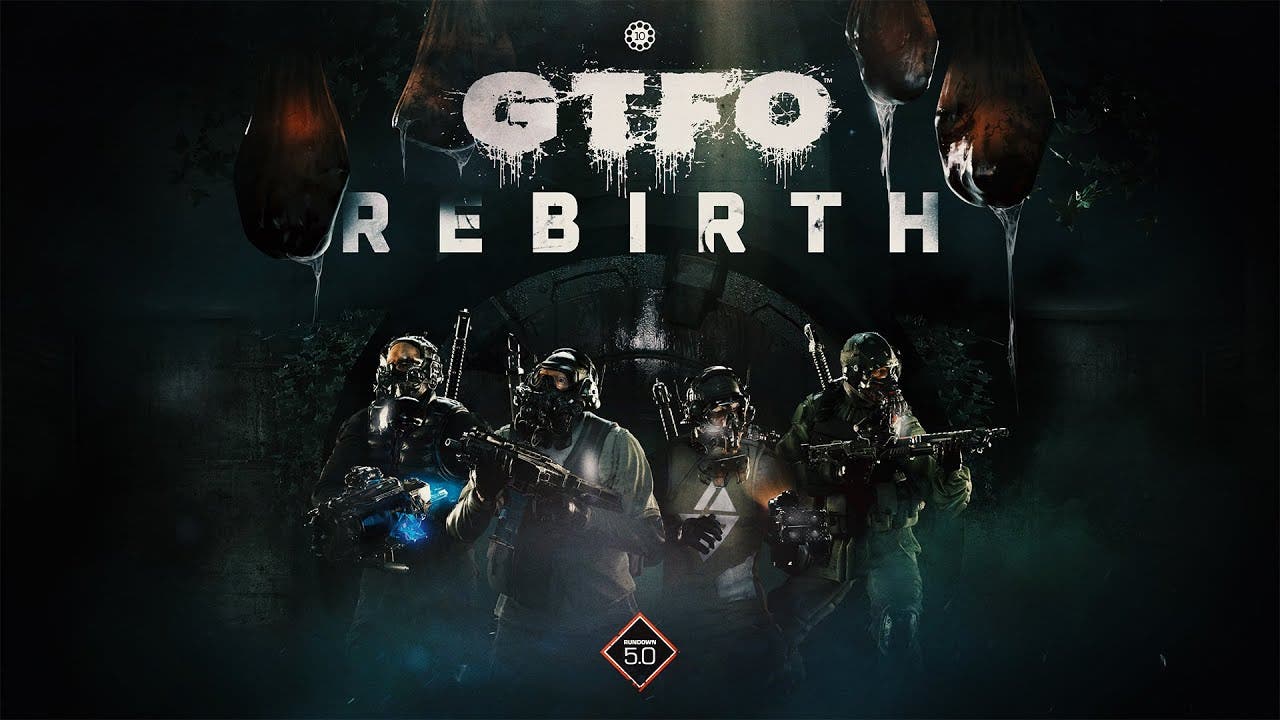 Described as “Left 4 Dead meets Aliens,” GTFO is a terrifying, hardcore cooperative multiplayer shooter where good teamwork means the difference between life and death. The game uses a concept called Rundowns, which are regular game updates that add new limited-time expeditions (maps, scenarios, enemies, etc.) that completely replace the previous Rundown. Cast in a four-player team of prisoners held against their will by a mysterious entity called The Warden, survival depends on a team’s ability to communicate, coordinate, and manage their ammunition — else they doom themselves to a bloody, messy death. To the Warden, they’re all expendable.

Rebirth sets players farther down into The Complex into an area called Floodways — a new environment that substitutes a dark and cold industrial aesthetic for one where nature has sought to reclaim the domain. Further expanding the lore of GTFO, within Floodways are clues as to why players are trapped in The Complex and imprisoned by The Warden.

New to GTFO are Booster Implants, which give players additional incentive to re-enter The Complex. Players can now find valuable artifacts within the game that The Warden eagerly collects. If pleased with their findings, he rewards players with Booster Implants — an ability-buffing injection delivered directly into the brain. Players juiced up with a Booster Implant can enjoy a range of perks such as better weapon handling and faster terminal hacking. Earlier Rundown updates have seen the additions of other gameplay mechanics such as layered difficulty, which gives players the option of choosing different routes through expeditions, ranging from very hard to extreme. Artifacts are delivered to The Warden regardless of completing an expedition, giving players an additional resource when revisiting a Rundown that may have bested them previously.

“Brick by brick, we’re laying the foundation for GTFO to exit Early Access as a force to be reckoned with,” said Ulf Andersson, Creative Director of GTFO. “We believe the addition of Booster Implants gives players an optional gameplay mechanic that not only enhances replayability but also accessibility to those facing too much of a challenge when they first start playing GTFO. In combination with layered difficulty and other quality-of-life improvements, we maintain GTFO’s challenging gameplay for hardcore gamers but ensure that new players are welcome into our fantastic community.”

“With Rebirth, we’re also expanding the lore for fans that want to know more about the world we created,” said Simon Viklund, Narrative Director of GTFO. “The new additions found in the Rebirth update offer clues to the background story of the game, providing slivers of new information as to what’s going on, why players are imprisoned in The Complex, and who — or what — The Warden is. Overall, we can’t wait to hear what players think of GTFO’s most significant update to date!”

New in the GTFO Rebirth Update:

GTFO released on Steam in Early Access in December 2019 and is available for purchase for $34.99. To celebrate the launch of the Rebirth update — which is free to owners of the game — GTFO is on a limited-time sale for 20% off. To purchase the game, please visit https://store.steampowered.com/app/493520/GTFO.

PAYDAY THE HEIST® and PAYDAY 2® are registered trademarks of their respective owners. 10 Chambers AB is not associated with, affiliated with, sponsored by and/or endorsed by them.