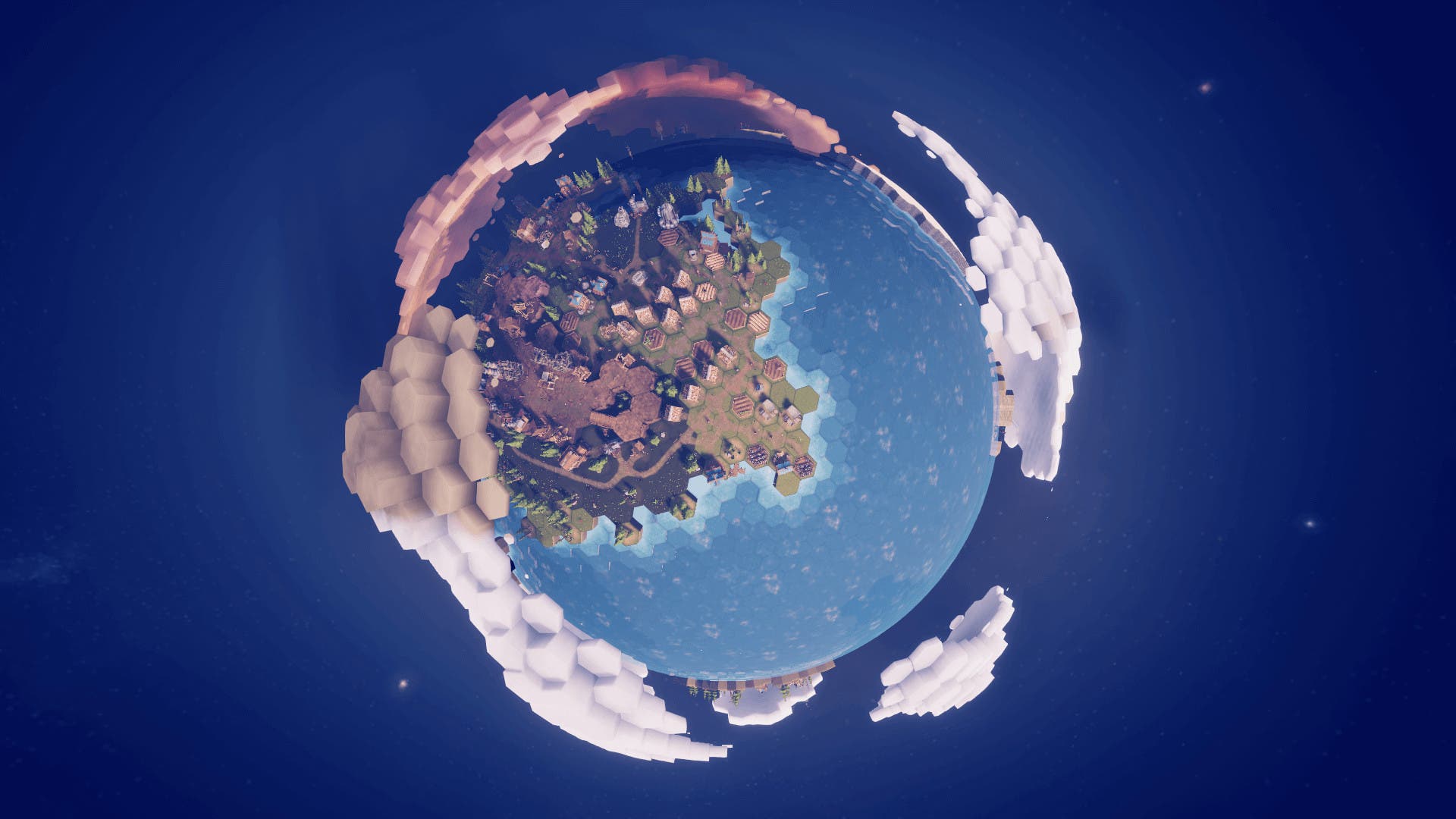 Before We Leave Review

Coming in at a surprisingly small 1.3GB, there’s a whole solar system’s worth of city-building crammed within Before We Leave. This is a non-violent city builder, which means it has all pillars of a 4X game, except for the eXterminate mainstay. Balancing Monkey Games have made a game that’s both accessible for newcomers, but still offers enough depth for the hardcore. Before We Leave is as gorgeous as it is grand, and it only gets more enjoyable the more time you spend with it.

Set in a post-apocalyptic world, Before We Leave sees how fifty peeps (hey, that’s what the game calls them) re-learn how to thrive and survive after re-emerging from their shelters to a new world. You’ll guide these peeps from their humble beginnings of harvesting wood and building simple huts to making complex metals and two-story homes.

The game has already been available on PC via the Epic Games Store. But now it’s coming to Steam, including four scenarios. Two of them just alter the normal game, while the latter two offer a shorter time to complete with different goals outlined. This release also includes all four of the game’s updates since launch: “The Kraken Comes” which expands on water and underwater elements, “Over & Under” which improved the UI and UX, “Paving the Way” that brought a substantial visual upgrade to the game with new roads and pathing, and “Biomes & Beasties” which gave your worlds more diverse biomes and more improved visuals. There will be a fifth update that coincides with the Steam release that adds impacts via weather to peep fatique and move, as well as how crops grow in these environments. All of the updates have had significant impact, and I can’t imagine it without any of them. 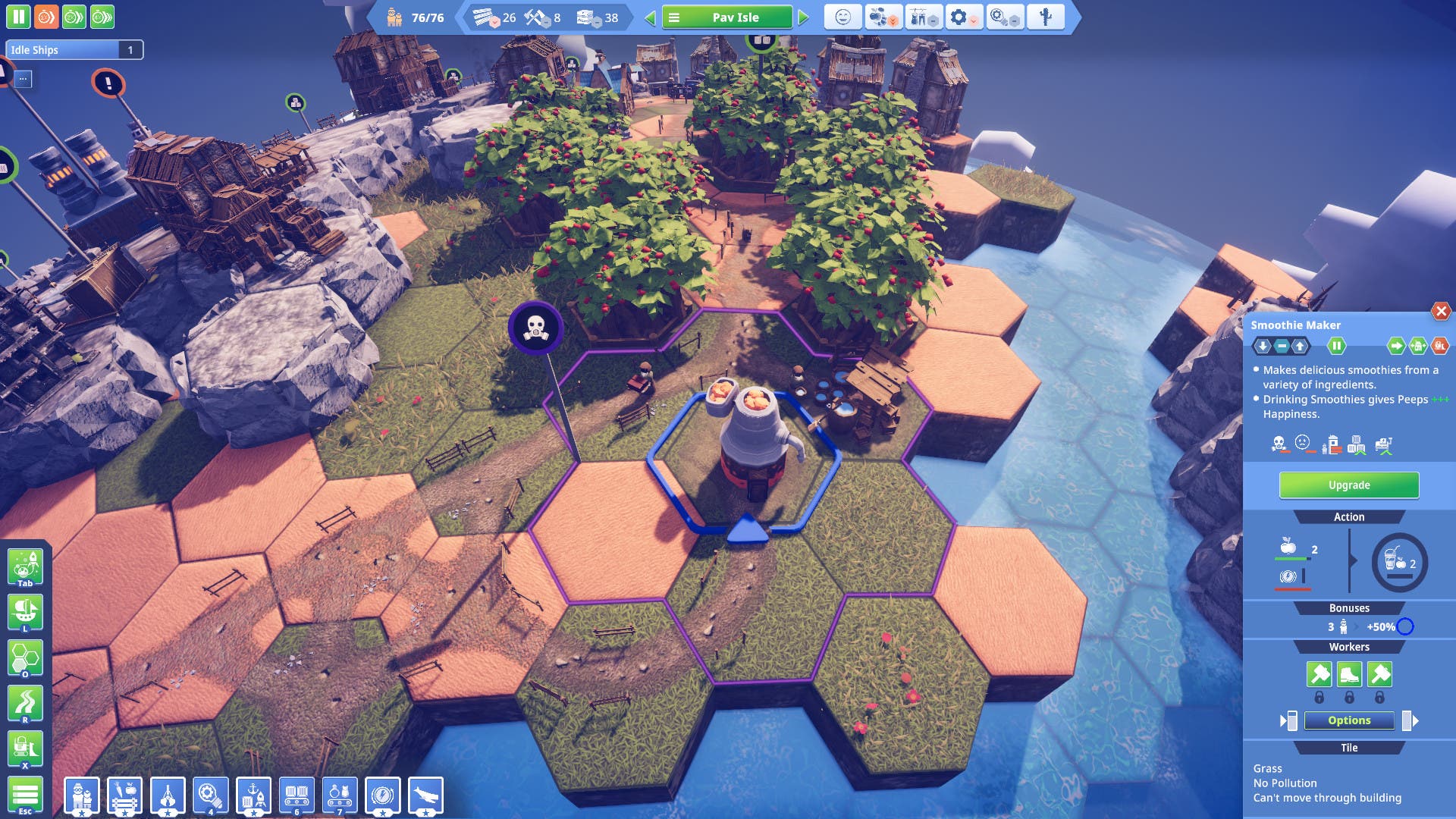 From the moment you start playing, you notice the distinct globe view you’re given. You can tell you’re on a planet because of the extreme and exagerated curvature. It’s clear this is not to scale, but each planet when fully explored does have an overwhelming and satisfying size to them, that cannot be expanded on. It looks and feels like a playset in motion as you scroll in and out, even hearing music from your town square fade away, the further you get from it. You think this is all there is, but the mid-to-late game reveals rather slyly that you’re actually in a planetary system that you can build up. And with the right research and technology, will be able to travel and create trade routes between the planets. There is a finite amount of planets to expand on, but it is no less impressive or incredible a feat to have a city builder operate on this scale without it feeling like an automation game.

Placing items is a bit like tabletop game, as there are hex nodes to place the building or item of your choosing. Since you’re essentially restarting civilization, you’ll be harvesting resources, building warehouses, crafting new resources, and the like. There’s a bit of a loop as you expand to new islands as humanity begins to re-expand. It actually takes a elements from 4X games, as you’ll explore, expand, and exploit. There’s no death or combat to be found, so no extermination. Your peeps can’t die, but you have to make it work or they’ll be unhappy. As a result, they won’t be nearly as productive as they could be, and it gets painfully slow that way. There’s a really efficient way to start anew on an island, and it’ll take several colonizations to get there, but that template is key to a swift progression. 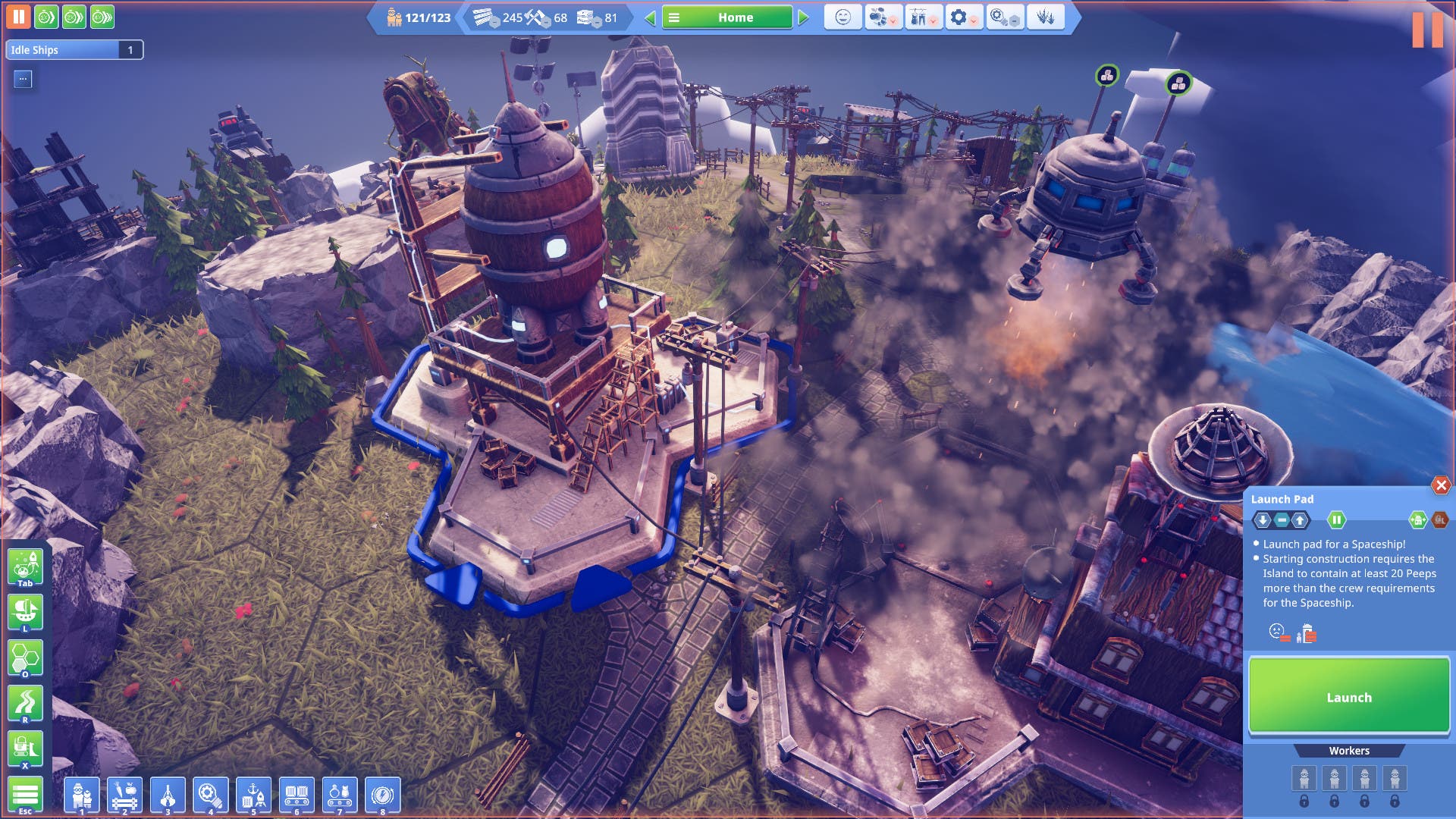 You’ll be collecting a myriad of resources throughout the game, either by harvesting or manufacturing your own. At first things are simple, like: wood, tools, and stone. Then, you’ll have to worry about food and water. And as mention earlier, you’ll be making glass, steel, and even fuel. Being able to do so will require building a library to research how to make these things, ostensibly for the first time as the peeps wouldn’t have known this already. Research points come in different colors and forms, can be accumulated by building an explorer’s hut who will traverse the island for them. Some islands will have research points that others don’t. Thankfully, there are global unlocks for all research so that any island or planet will have the knowledge to make things without the tedium of relearning or otherwise wasting time.

The way Before We Leave is presented to you with the globe view, there’s no need for a minimap. The way you get around is its own one, and that frees up the UI to show you more of the game. You do have the option to play the game in real-time, or fast forward to two or four times speed. Given that you can’t kill any peeps, there’s no consequence from just running the game at 4x speed the whole time, it keeps the game moving at a brisk pace. 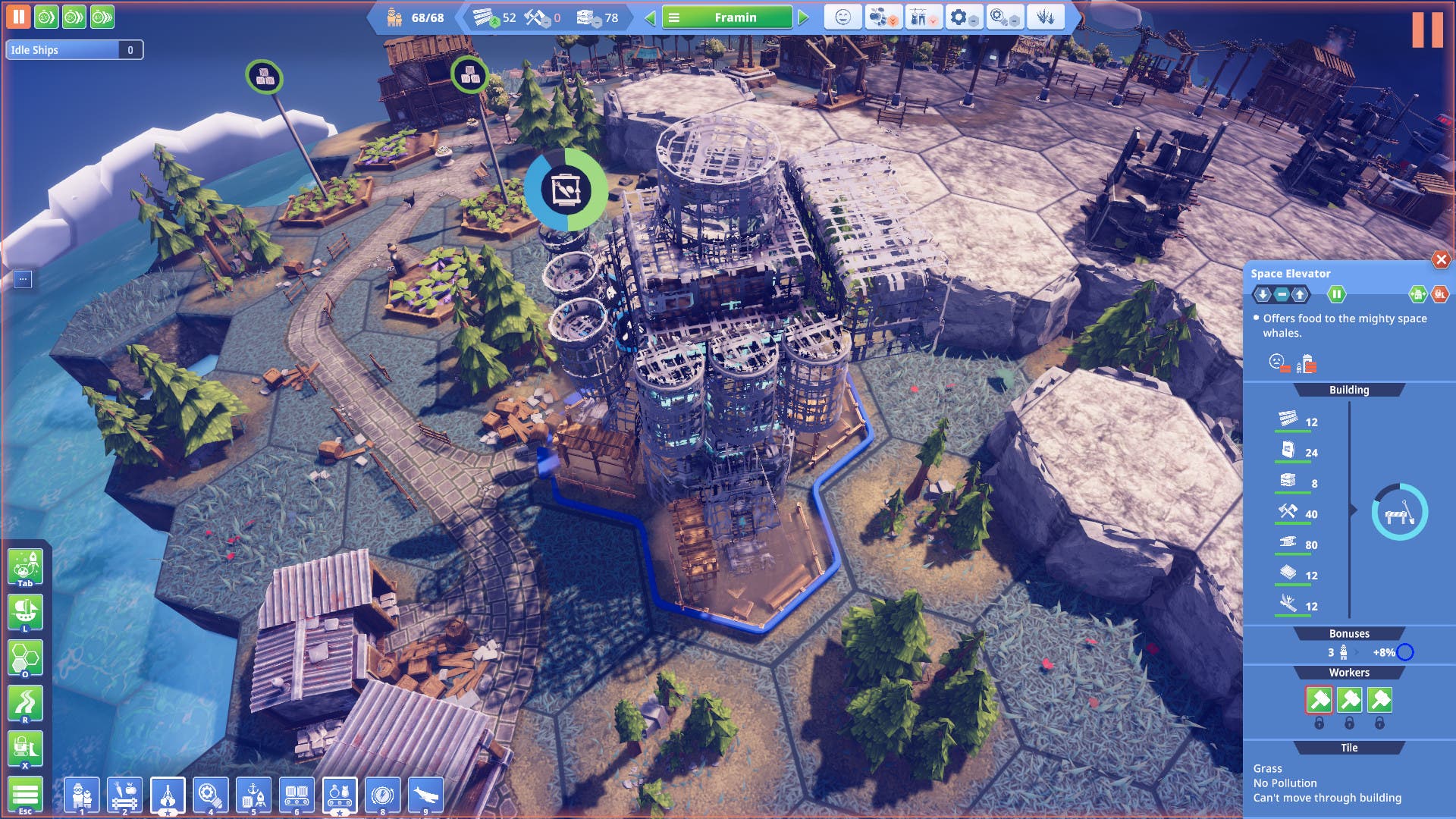 There are several biomes, most of them are normal and perfectly habitable. Others, like swamp and crystal biomes have restrictions on the type of buildings that can be placed on them, forcing you to think strategically on how best to use the island’s natural resources to fuel your other island chains, knowing this is not an island for living on. You are incentivized to build ports at each island to then ship any of your gathered resources to and from the islands via trade routes. This allows an island that’s mainly just farming to send its resources elsewhere. I did find the interface to be lacking for trade routes, but was able to get the hang of it eventually.

While billed as a non-violent city builder, that’s not entirely accurate at this point. After only what I can describe as a space whale sideswiped my planet and devoured hexagonal nodes full of resources, buildings, and other necessities I had carefully built, I learned I was not safe. The space whale, among other ancient creatures like the kraken are devastating creatures that will not let you rest easy. There’s already a simple implementation of weather systems, and it affects how ships and the island operate until they pass. The game is chill, cozy, and other relaxing terms, but it doesn’t let you do any of those things when you get into the endgame. 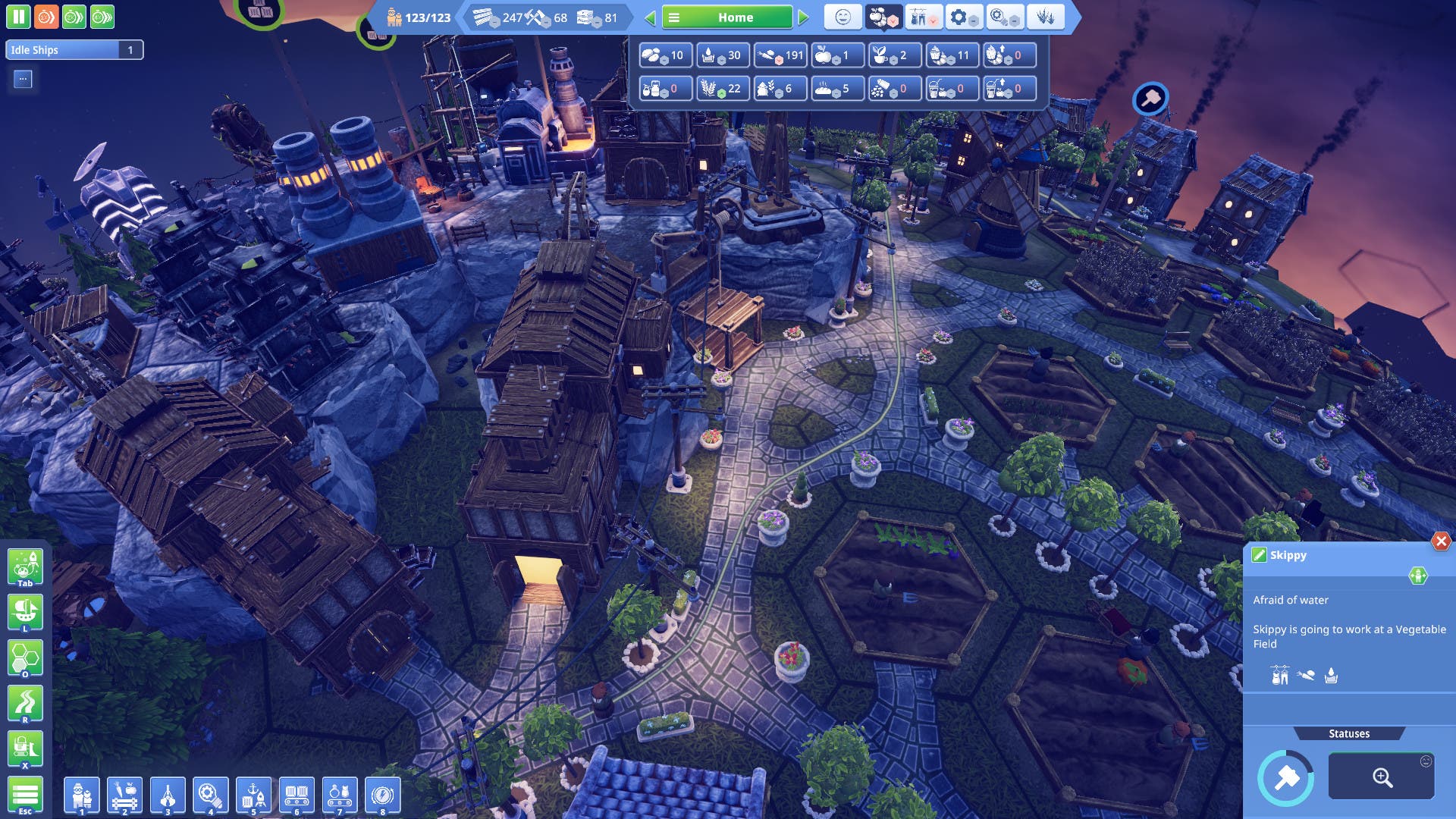 Before We Leave is a visually stunning game. I have no complaints about its performance or quality. However, as someone who is prone to get motion sickness while playing certain games, Before We Leave was almost that game. At its default settings I was uncomfortable, but ultimately “fine” playing the game. Though when I double-checked the settings, I found a field of view slider that I could adjust. By expanding the FOV slider to near its max, the discomfort I felt had completely subsided. I really applaud Balancing Monkey Games for this feature, as they realized its potential impact. 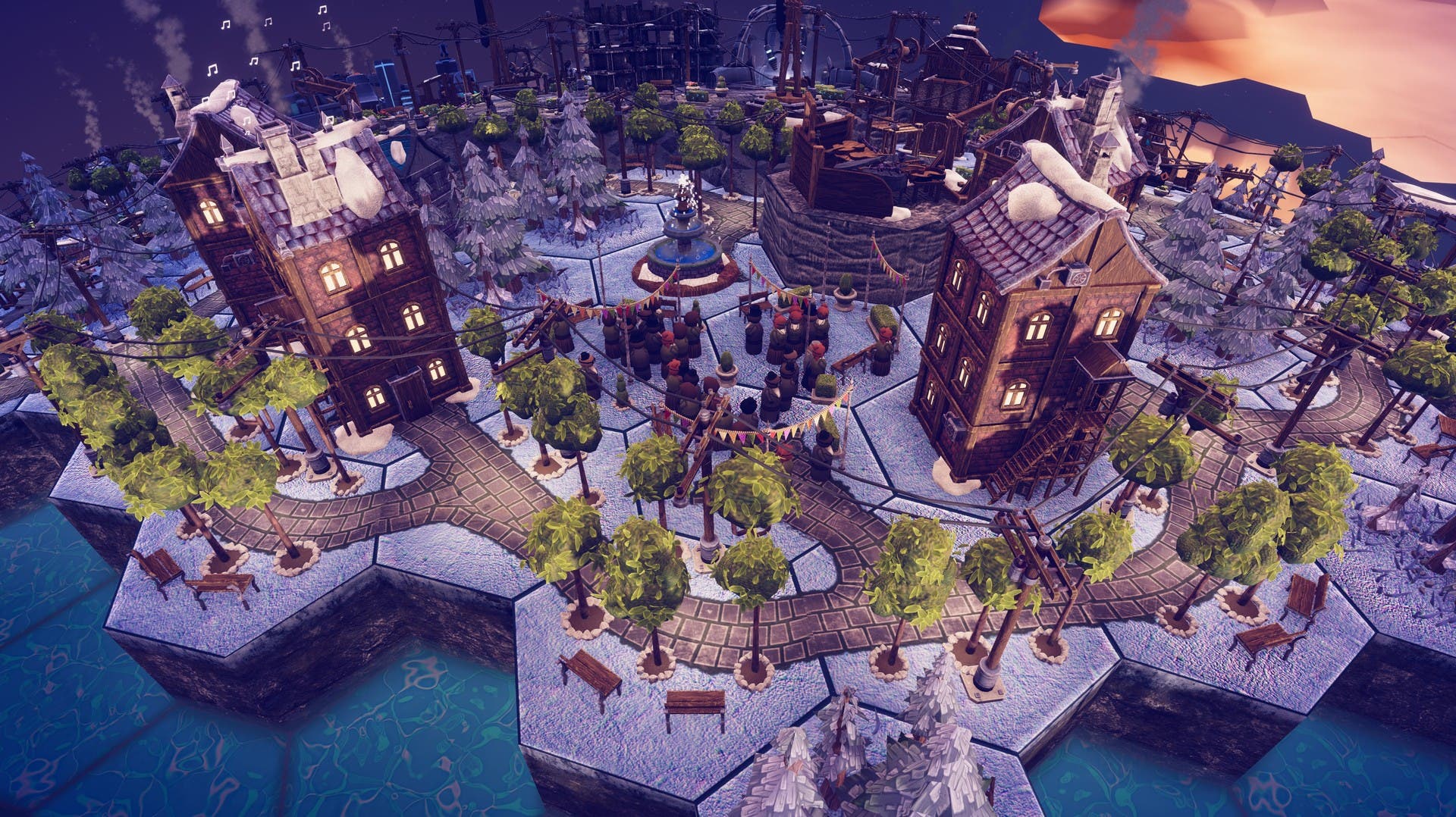 Before We Leave has a surprising amount of depth and layers to it, that you’ll continually uncover as you play. This is a non-violent game, but it’s anything but safe. Some may balk at the minimal consequence to properly treating or taking care of your peeps, but the space whale and other ancient creatures will do their part to disrupt your rebuilt civilization in more meaningful ways. Before We Leave has left an indelible impression upon me, from the visuals to the unique gameplay, this is a planet builder that won’t be eclipsed anytime soon.