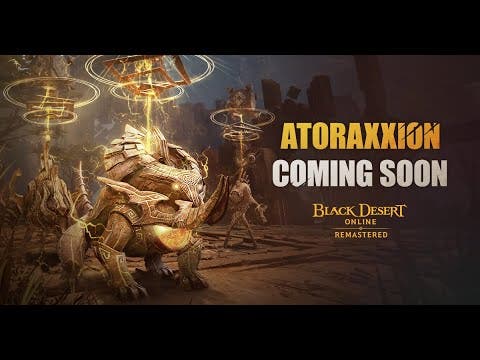 Black Desert Online gives a peek at its first dungeon, Atoraxxion – launching on PC and consoles later this Summer

Manhattan Beach, California — 2 June 2021 — Today, Pearl Abyss announced that Atoraxxion, the game’s first co-op dungeon, will launch later this summer on both Black Desert Online and Black Desert Console. The dungeon will be released in four themed parts — the first, Vahmalkea, will be available soon. The company also revealed additional information on the dungeon, including a look at new mechanics and gameplay.

Atoraxxion is the game’s first co-op dungeon, requiring players to work together to solve various puzzles scattered across the map, face different combinations of Ancient Weapons and enemies, and navigate special obstacles throughout the dungeon. Although Atoraxxion is a dungeon, its size is almost comparable to a region.

Atoraxxion is divided into four parts and planned for release in the following order: desert, ocean, canyon, and forest: The dungeon’s difficulty will increase with each release, and will differ slightly for each player’s server or platform. Players on the fast-growth Elvia Realm servers will face a higher difficulty, while players on all other servers will have a normal difficulty. Console players will also receive the normal difficulty level.

As for in-game lore, Atoraxxion was built by the “Sage of the Past,” Rux Maha Dehkia, as a base to build an army of Ancient Weapons to repel the Black Spirit. The Last Stronghold includes a facility to test Ancient Weapons’ combat capabilities in a variety of environments to be prepared for any situation. Watch the latest developer diary for more information on the history of Atoraxxion.

For more information on Pearl Abyss and Black Desert, visit www.blackdesertonline.com and console.playblackdesert.com.