I was hoping for more, but I can't say I'm disappointed with what I got. SkyDrift Infinity doesn't try to do anything more than it claims to be. It's a fun-for-all ages game that will take several hours to see all the content, and many more hours in order to do everything that there is to offer. SkyDrift Infinity is wonderfully engaging and enjoyable spectacle, just not an essential purchase.

SkyDrift Infinity is a lot of things. It’s remaster, a tenth anniversary, and a little more than Mario Kart in the sky. It’s neat revisiting the game after all this time. It still holds up and manages to be a lot of fun with harrowing air battles, navigating tight crevices, and laying destruction upon your enemies that leave them in a ball of flame. SkyDrift Infinity is a no frills dogfighting meets racing game that’s sure to satisfy arcade pilots once more. 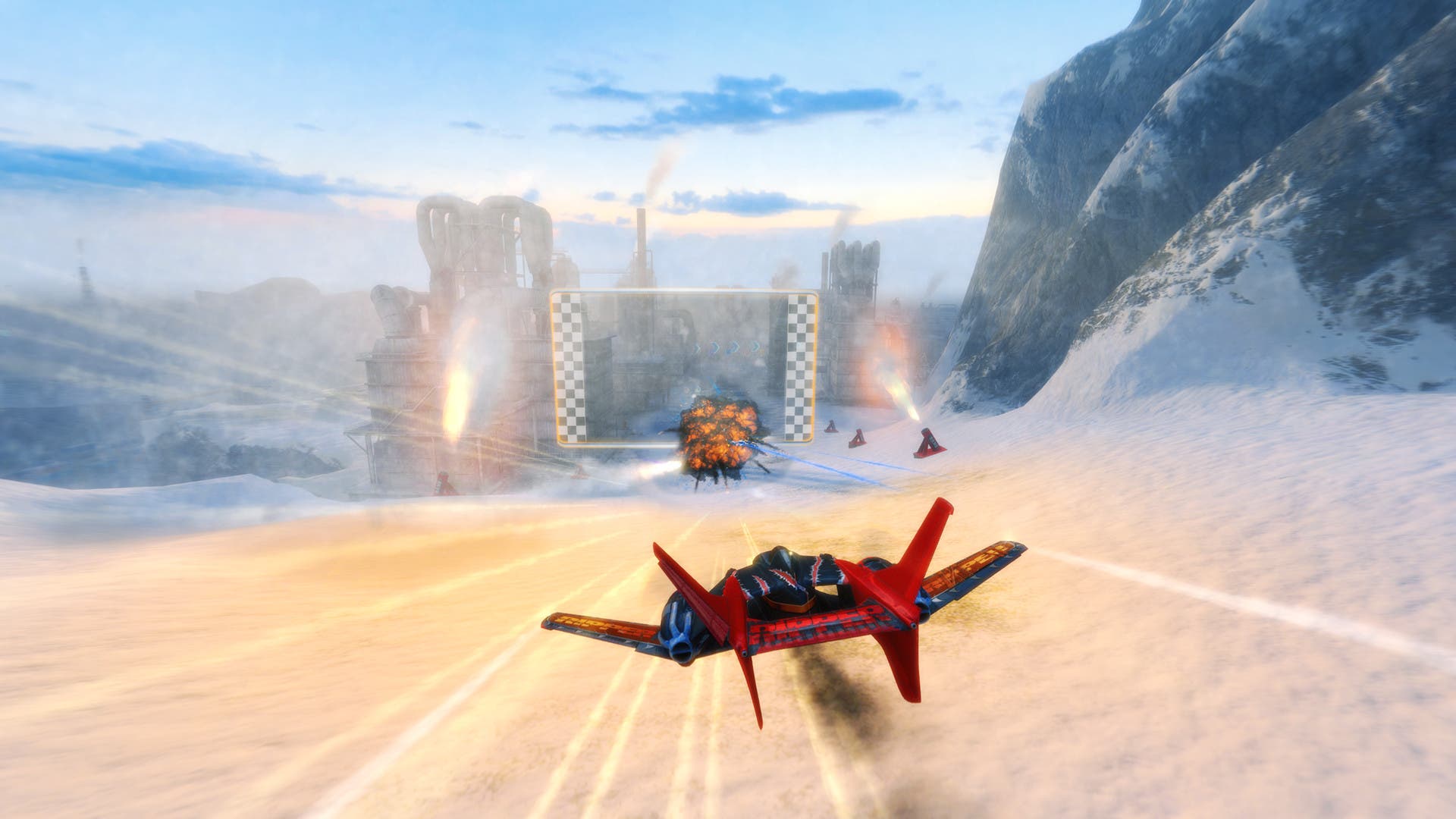 I was a bit surprised to the same levels, same achievements, and same planes in the game. It’s not truly billed as a remaster, or remake. But it certainly is, there’s no mistaking that. Every level of the campaign structure is the same, and does not differ. It does include all of the DLC without any additional purchases, thankfully. So what is new? Well, skins for THQ Nordic games like Darksiders it seems, but not much else. If you’ve missed out on the game when it originally came out, it’s worth playing. But if you did everything there was ten years ago, this becomes harder to recommend for a return trip.

Since there’s no story to tell, the campaign is just an organized series of races that offer variety from one another while introducing you to new locales as you unlock new races. There are seven stages, containing roughly five events each. As you win races and do well, you’ll unlock planes and skins to be used in future races. Or in some cases, the better planes to be used in prior races to place higher. The act of flying and shooting comes pretty natural, and there’s a solid tutorial to get you used to it all. All of the tracks are really open and offer different biomes, but not unlimited. There is a barrier that will come up if you stray too far off-track in any direction. It’s a really solid, if not predictable set of environments with combat and racing.

No matter which of the now sixteen planes you choose from, there’s something that will either cater to you or the level you’re about to play. There are six power-ups that range from standard things like shields, machineguns, missiles, and repair. You’ll collect them, and store up to two different kinds. Collecting a duplicate of one will enhance its power or give you additional ammo. There are only three event types: power race is a race for first across the finish line but with weapons, speed races gives you boost rings and no weapons, and survivor is a weapons free-for-all as a countdown timer slowly eliminated from the race. These aren’t very exciting on their own, but it’s enough.

Returning as a separate mode is multiplayer. In two flavors, local and online. You can create custom matches or do online matchmaking. You’ll find yourself playing all the same modes of the campaign, with the addition of deathmatch and team deathmatch, while being able to set some weather conditions for flair. Suspiciously, there’s not really any options to be found in SkyDrift Infinity. I even booted up the original SkyDrift to make sure I remembered right, and I found: resolution options, detail level, shadows, texture level, and effects. Here, there’s only language, volume, and whether you want your framerate capped at a specific rate or not at all – no video options whatsoever. It’s peculiar but the game absolutely screams, and will have no problem achieving your desired framerate on PC or console. 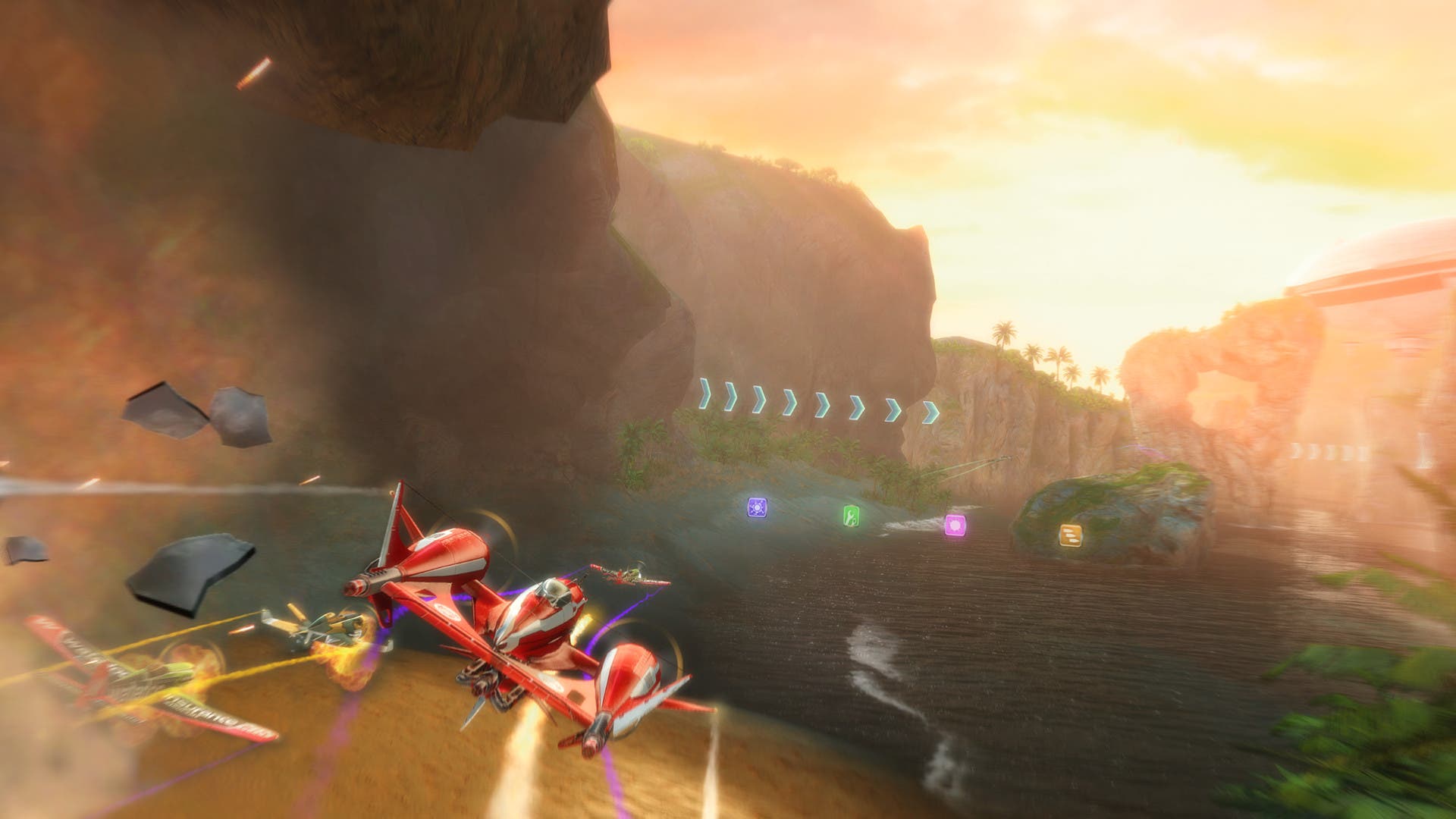 I was hoping for more, but I can’t say I’m disappointed with what I got. SkyDrift Infinity doesn’t try to do anything more than it claims to be. It’s a fun-for-all ages game that will take several hours to see all the content, and many more hours in order to do everything that there is to offer. SkyDrift Infinity is wonderfully engaging and enjoyable spectacle, just not an essential purchase.