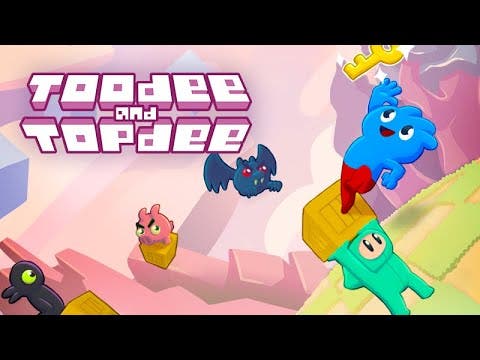 Toodee and Topdee, 2D platformer and top-down puzzler hybrid is out now on Steam

A cosmic turbulence has caused the 2D platformer and top-down puzzler dimensions to merge!

Switch between Toodee and Topdee and their unique perspectives to overcome hard-as-nails challenges, solve mind-melting puzzles, and defeat huge bosses in single-player or co-op – available on Steam right now!

A genre mix-up – Seamlessly blending 2D platforming and top-down puzzling within its levels, Toodee and Topdee is a truly original indie puzzler

Hard-as-nails challenges – Head-scratching puzzles are matched with precision platforming sections – sometimes all on the same levels, making for a seriously entertaining challenge

Accessiblity – Finding it all a bit too tricky? In-game difficulty settings allow you to toggle some of the game’s rules to better suit your own play style, regardless of skill level or experience

Meet strange friends – Embark on a quest to find the missing semicolon and return balance to the universe, meeting bizarre characters along the way

Huge bosses – Oh, did we forget to mention the huge bosses? Good luck! And don’t tell anybody, but there may be some secrets to uncover…

About the developer – Diet Zribi is made up of two brothers, Gonen and Ori, who have published more than 12 games for various jams, available on their itch.io page. Toodee and Topdee started its life as a game jam prototype, spawned from the theme “combine two incompatible genres”, with great player feedback leading the duo to pursue the idea as their first commercial project.