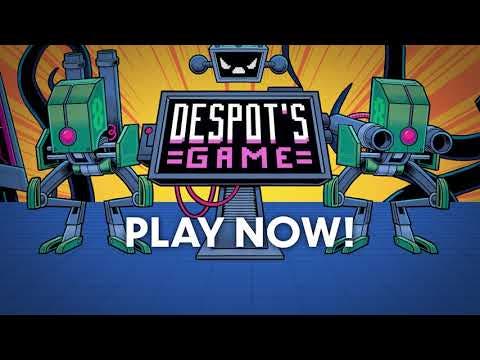 ST. PETERSBURG, Russia  — Oct. 14, 2021 — Despot’s Game: Dystopian Army Builder, the roguelike tactical auto-battler developed by Konfa Games and published by tinyBuild where commanders build their squad of puny humans into a legion of wizards, ninjas, and dozens of other heroes while leading them through a strange post-apocalyptic labyrinth, gears its pixel-art nude dudes for battle on Steam Early Access for Windows PC today.

Trapped in a massive maze-like complex with seemingly endless compartments, a frail group of humans robbed of both their memories and clothes band together for survival. However, these unfortunate souls aren’t alone–together, they must beat back killer robots, man-eating cabbages, vicious hellhounds, and other forces of destruction led by the nefarious d’Spot who runs the show.

These poor souls will need more than just their birthday suits if they want to live. Equip the unarmed masses with a variety of killing implements from flesh-ripping chainsaws and laser swords to ridiculous apparatuses including stale pretzels throwers, handy paddle-balls, and damage-soaking refrigerators.

A well-balanced army is necessary to forge the longest run, and the more unique weapons from the same class it holds, the more power ups they unlock. Diversify the cultist class to grant them the “Call of Cthulhu” to unleash greater damage and tricksters to dodge attacks with ease. Purchase mutations to provide fighters with thicker skin, obtain more bonus mana, increase attack speed, and more.

Party members all fight on their own, using their skills to turn the tide so long as they’re well-fed and positioned. It’s up to a cunning strategist to lead this motley crue by arranging meatbags humans for battle. Mages sporting a rabbit-in-a-hat and spirit masks can deal damage from afar just like shooters with their crossbows and plasma guns. Fighters will take the front lines with claws and Rocky’s boxing gloves to beat enemies while tanks protect units with tower shields and periodic tables.

Fret not, as new meat for the grinder is always available for the cheap price of two tokens, and can also double as food source for a hungry army if desperate times call for desperate measures. And when the end seems near… It’s time to face the ultimate challenge–the deadly end-game armies of other players!

“We can’t wait to see the crazy battles commanders will get into during Early Access,” said Nikolay Kuznetsov, Game Creator, Konfa Games. “From footballers knocking out some zombies and Excalibur swords cutting into robots, anything is possible in Despot’s Game. We’re ready for the chaos to begin!”