The standard edition of Tribes of Midgard is available on the PlayStation Store, Steam, and, as of December 14, the Epic Games Store for $19.99 USD, or the Deluxe Edition, featuring platform-exclusive armor, weapons and pets, for $29.98 USD on Steam and $29.99 USD on the Epic Game Store and the PlayStation Store. Both versions include Season 1 and Season 2 content, as well as all future Seasonal content. Players on Steam and Epic Games Store can enable crossplay by syncing their accounts.

“Our goal has always been to build Tribes of Midgard into the ultimate Viking Sandbox, and Season 2 seamlessly continues that journey for the one million Vikings who are already members of our Tribe!” said Julian Maroda, CEO and Creative Director of Norsfell. “This new season radically changes the world, allowing players to swim (literally!) through our ever-growing Norse sandbox, setting sail on new horizons, and fighting waves of new enemies as they enjoy a boatload of QoL improvements. We’re delivering a true expansion in every sense that was built from the ground up to expand upon every facet of the original content, giving players new tools regardless of which Saga Quest they’re on.”

Serpent Saga
Grab your weapons and craft some Boat Kits, because starting in Serpent Saga, Vikings can explore new horizons of Midgard with the addition of Boats and Swimming. Boats and Swimming are all fun and games, but make sure you don’t get too distracted, as you have another Saga Boss to contend with before Fimbulwinter. Players must race against the oncoming winter to find and unlock the island lair of a mysterious new Boss. But fear not, Wolf-fans – Fenrir still awaits those brave enough to choose to attempt to take down both Saga Bosses in the same session. 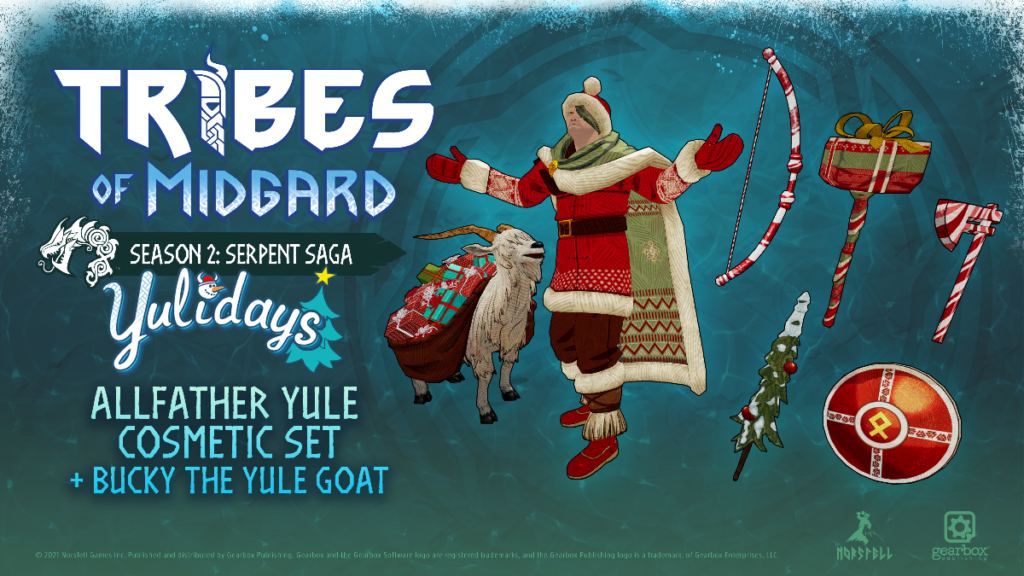 Holiday Events
From December 14 – January 3, players can take part in the seasonal Yulidays event. For three weeks, players can unlock cosmetics, a pet, and other festive goodies as a part of three limited-time Festive Challenges, along with a thematic village and main menu. Make sure to log in every week to unlock all the Yuliday drops – it’s the gift that keeps on giving!

Tribes of Midgard is Norsfell and Gearbox Publishing’s take on Vikings in a Diablo meets Don’t Starve blend of action, survival, and roguelite elements. Experience a bright and colorful world to explore by land and sea, where you can gather loot, slash through enemies while playing solo or with friends. Your tribe’s might will be tested in two different game modes: a session-based Saga Mode and an endless Survival Mode. A variety of objectives, enemies and areas of exploration offers endlessly-replayable gameplay and fun.

More details regarding Season 2 will be shared throughout the next two weeks, so make sure to visit www.TribesofMidgard.com and follow us on Twitter.