Bumping into people is seen as discourteous or even offensive in most circumstances. Which stands to reason how Shovel Knight & Friends use this as their primary form of attacking in this Dr Mario meets Wizardry mash-up of genres with Shovel Knight Pocket Dungeon. It takes the concept of falling block puzzle games and wraps in the confines of movement like a classic dungeon-crawler. The result is an endlessly entertaining and challenging experience that’s also highly customizable to tailor to the way you want to play. This is an equally great game for those who know Shovel Knight well from his previous adventure, or have yet to meet him as this is a great introduction who may not enjoy platformers. There’s so much to love about Shovel Knight Pocket Dungeon, because no matter little or much time you have to spend, you’re always rewarded for your efforts. 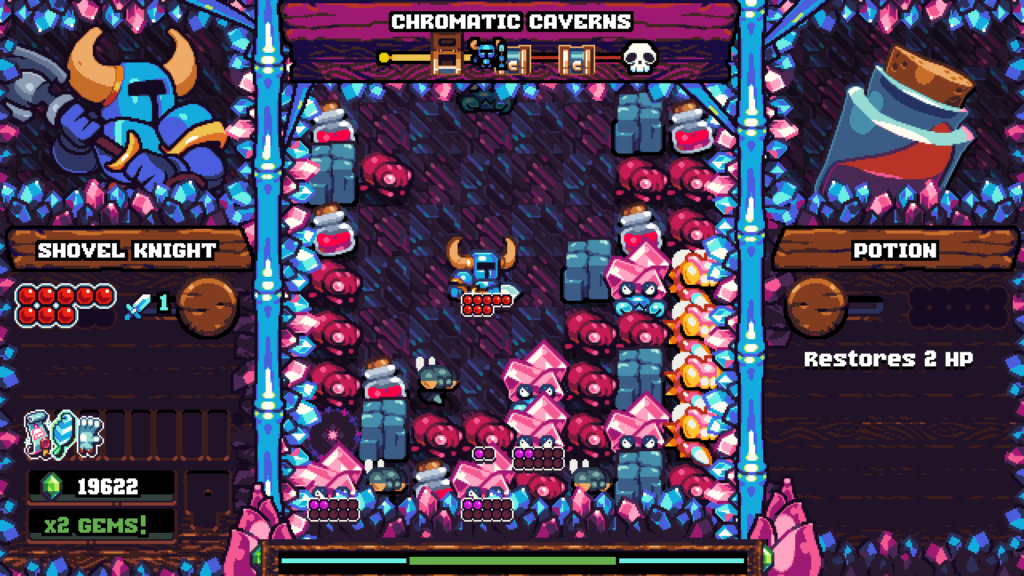 You first play as the eponymous Shovel Knight, the hero of the 2D and 8-bit platformer from several years ago. After meeting the Puzzle Knight, you learn that the Pocket Dungeon Master is the ruler that needs to be dethroned. Being somewhat new and unique, the game teaches you all the mechanics in a tutorial sequence. It’s apparent that the art style has changed and more refined, evoking the 16-bit era this time around. When you first start a run, each move advances the dropping blocks, which can be just a block, an item, health, or most likely an enemy. If you choose to stand still, this gives you time to think, but time moves forward slowly. When you move to attack, you’ll get information about how much the enemy will hurt you back. This gives you information to strategize when to attack, back off, heal, and finish them off. Combat puts you on the defensive just as much as the offensive, you’ll have to think on your feet. Hitting enemies linked together in a row either vertically or horizontally allows you to chain your attacks and fatal blows against them, building up a combo meter. Keep the chain going, and you’ll be screen clearing and collecting a lot of gems. If you get a game over, all the gems you’ve collected go back with you to camp and accumulate a moderate wealth.

Gems are the currency that unlocks just about everything, and expands your possibilities for equipping powerful items during any given run. Every level has the same sort of cadence where you’ll attack and defeat enemies to collect gems, vanquish enough enemies for a chest to drop a corresponding key; and once you unlock the chest with the key, the process repeats until the next chest. Repeat this process three times, and a door will begin to fall, as will the associated key to open it. As you progress and the enemies become more difficult, seeing a chest, a key, or a door is a sign of hope. Upon exiting through the door, your time in that level is done and you’ll rush to the next area. This is the gameplay, and this is the loop, and none of it ever feels monotonous due to the randomization from level to level and run to run. 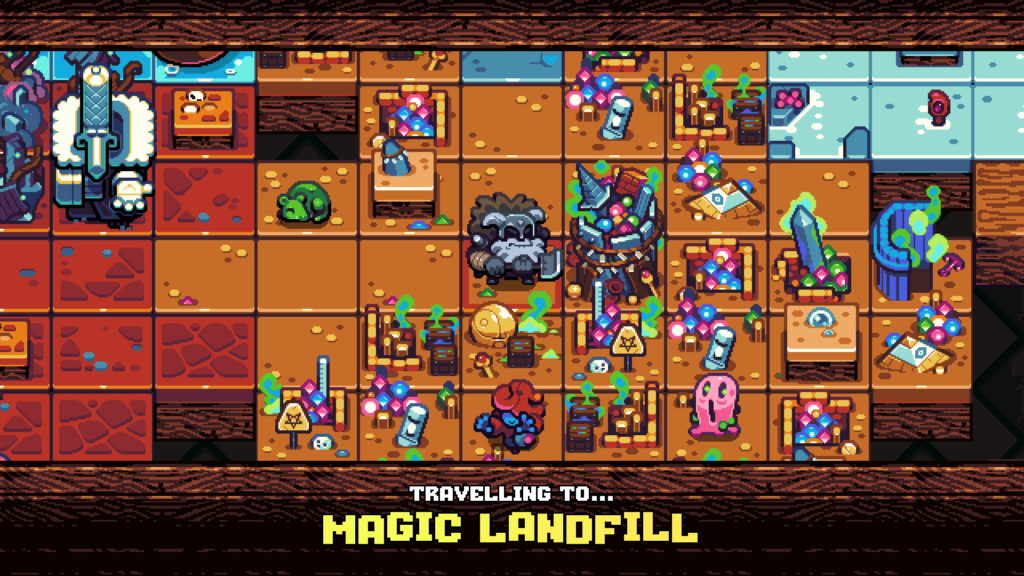 Shovel Knight Pocket Dungeon gives you a surprising amount of choice in how difficult (or not difficult) you want the game to be. There’s sliders to control choice of how many lives you get, how much health you have, and how much damage you’ll do. You can even turn off items and relics if you desire, and these changes can be made at any time, as much as you like. When starting the adventure mode for the first time, you’ll be asked to pick one of two options. You can choose whether you have a single life, making the game like a roguelike where death means the end of the run. Or with infinite lives, but the caveat is that you can’t let the board fill up, or then it’s game over. The fact that you level have this level of control over your experience is to be applauded. If you alter the damage and health values, then feats (achievements) will be disabled. This makes the game more approachable than its platforming predecessor.

As you play through the game, you’ll come across bosses which offer a great challenge and unique encounters. Defeat them, and they’ll return to your camp and will be playable for future runs. With Shovel Knight, he has fatal blows that do more damage to chains and finds potions more often. Swap out the Shovel Knight for an early boss like the Specter Knight, or maybe the Treasure Knight who attacks for more damage below enemies. Learning the other character’s abilities is a learning curve all its own. There’s even another ten characters to add to your team, encouraging replays. As you make progress through each level, there will be an NPC at your camp who you can pay with gems to unlock shortcuts from the plains to the chromatic caverns. On top of that unlock fee, it’s then 500 gems to launch you to the selected area every time. This has more downsides than upsides, as you’ll generally have almost no items or relics like you would having spent time in the earlier levels. It’s still nice to target a specific boss, but the fast travel won’t be an essential part of your play.

There’s a shop in a camp that unlocks items to randomly drop during the course of play, this concept should be familiar to roguelike players. During a run, you’ll open a portal to a shop to purchase the items you previously unlocked to drop. These items you purchase can shift the tide for the rest of the run. Along the way, you’ll also find and equip relics that buff base stats or make-up for a gap in an area you hadn’t considered. Once a level is completed, the game tracks how many steps you took, how many enemies you knocked out, gems collected, and how long it took you. It’s neat the way the game tracks this information, as well as your total score for the leaderboard.

Aside from the adventure mode (the main way to play the game), there’s some surprises here. The Versus mode pits you against another player in split-screen like it’s Puyo Puyo Tetris, but very much in its unique Shovel Knight Pocket Dungeon way. There’s even a Daily mode, which is a one-shot run at getting the best score on the leaderboard – die and you’ll have to wait until tomorrow to attempt it again. The adventure mode is clearly the draw here, but the versus mode is good for those who have someone sitting nearby, and the daily run is an added layer of challenge for those looking for it. There’s no disappointments to be found here. 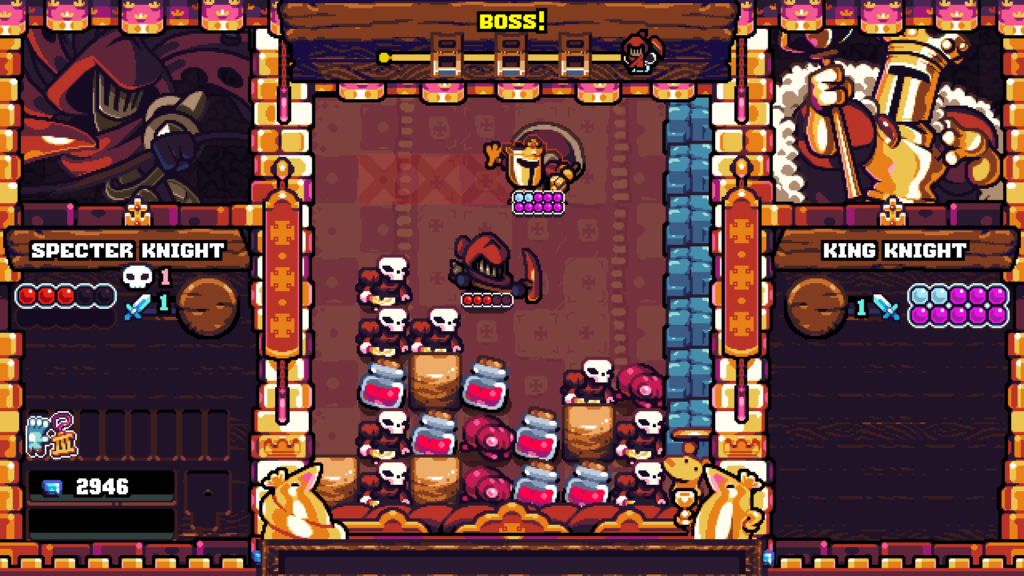 Shovel Knight Pocket Dungeon is pure fun, whether it be bumping enemies into oblivion or performing a palette swap costume change back at camp. This hybrid of genres is never frustrating or repetitive thanks to its variety and overall good nature. With accessibility and difficulty options, there’s a level of customization that makes this approachable by anyone. The gameplay loop is dare I say addictive, very rewarding as gems are never lost, and you’re always making progress towards a full run with any given character. It may take you over a dozen hours just to see the ending, and that’s with just a single character. Shovel Knight Pocket Dungeon is every bit blissful as it is unique and satisfying, where every ending is a new beginning.