The Gunk comes from Thunderful Development, formerly known as Image & Form. While not a SteamWorld game, it has the intimate characteristics that have made those games such successes: tight gameplay, a rousing story, and unmatched exploration. While the story beats are formulaic and well-worn territory, it maintains your interest throughout to uncover this wide-reaching mystery. Cleaning up has never been so fun or as satisfying, and in The Gunk, you might just even save a civilization and the whole planet. 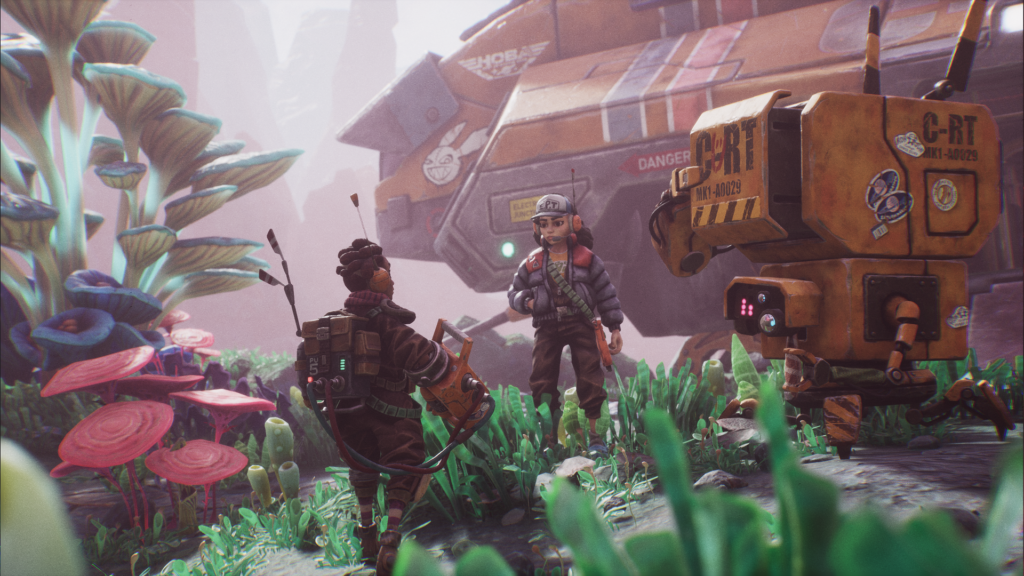 Straight away, the game introduces you to Rani, the character you play as, and Becks, the captain of the ship. These two are a pair of space haulers who travel planet to planet to scrap what they can for money, and it’s real tight these days. They find a planet that is seemingly untouched, but they get more than bargained for when they discover that the planet has more to say than what’s on the surface. As you go through and unravel the thread of this mystery, there’s some predictable strife among the two main characters, but their interactions feel genuine most of the time, making it hard to fault the missteps. It won’t be long before you’re made aware of The Gardener, the big bad and working towards getting powered up enough to put things to an end.

The gelatinous, titular gunk has some great physics and design to it. When you first come across it, it’s just awe-inspiring. Watching it whether it’s still or moving is so curious, because it looks like Jell-O mold. Who ya gonna call? Gunkbusters. Rani has a device on her power glove that can suck up anything and for whatever reason not need to dispose of the contents. As you clear the gunk from the area, you’ll see that areas are restored to its vibrant beauty from before it was tainted by this gunk. While I would love for the whole game to be a non-combat, vacuum-type genre, that’s not the case; there’s more to the gameplay than the chill cleaning up vibes you get early on. 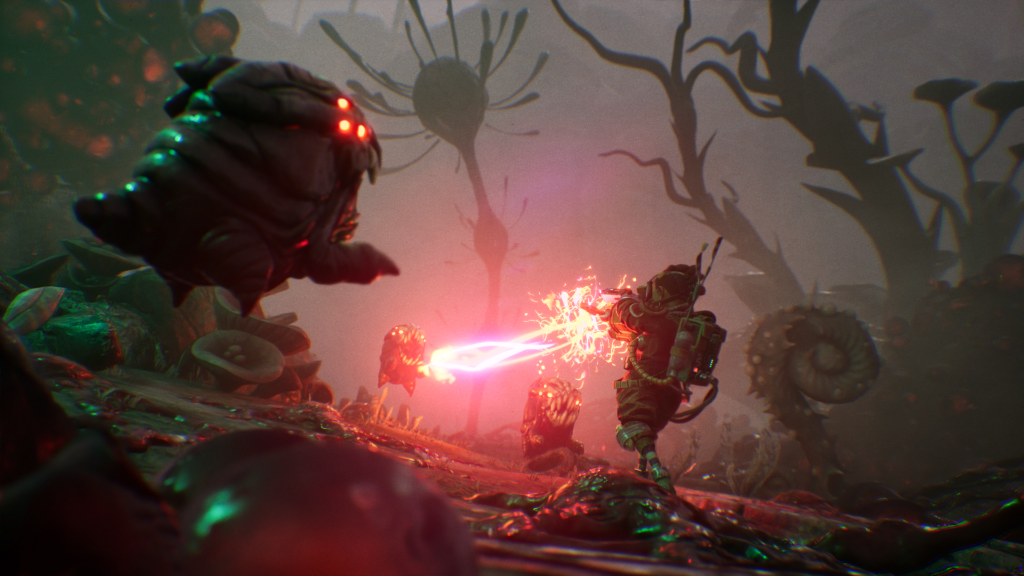 It’s not for some time before you encounter the first enemy, a seemingly cute but very dangerous puffy creature. You can dispatch them by just picking them up and throwing them, where they explode on contact. These enemies come in swarms, so you have to be light on your feet and can use them against one another. Later you’re introduced to the bull-like enemies, and they’re very easy to figure out how to defeat. As you progress, you do get access to a pulse blast which can stun and do damage to the larger types you come across. The stakes are low with regards to combat, and now that I think of it, I didn’t ever die – not once. This is a game where you don’t select a difficulty, so it’s something that can be played by just about anyone.

Your power glove is equipped with a scanner, so just about everything can be scanned for data. This data adds progress to unlocking upgrades for purchase. In order to purchase upgrades, you’ll have to scour every area for resources to collect. There are four main types: organic, fiber, metal, and alien. Collect enough of these, and you’ll be able to use the workbench at camp to make these upgrades available in your arsenal. Active abilities are things like the aforementioned pulse blast, whereas the passives are where when collecting material, your run is boosted. Every upgrade feels necessary and worthwhile except for the lure, which I never used after buying the first stage of it. I was able to get through the whole game without using it, so it’s an odd inclusion that didn’t seem like it was needed. That said, the combat and systems are otherwise well-designed that feels good. 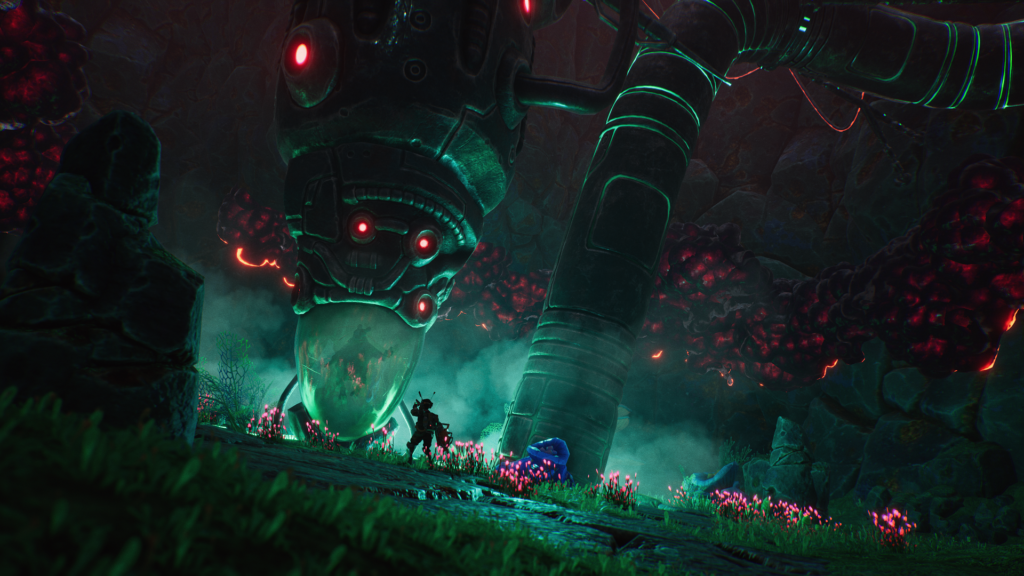 At certain points in your exploration of this gunky planet, you’ll be able to place signal beacons which allow for fast travel. I was expecting to be able to place more of them, but they’re carefully thought out locations. The first signal beacon feels like it takes too long to get because you’re just sitting on stacks of materials just waiting to invest in upgrades, so when it finally comes, it’s a huge relief. That feeling never resurfaces again because the future beacon locations not only make sense, but come at the right times. Having this in place feels like a necessity, but it’s a very welcome one to have, no question. I would not enjoy having to platform my way through environments to make it back to camp for upgrades.

You do have health in the game, it regenerates naturally or by unlocking an upgrade to accelerate. You won’t regen health while in the presence of the gunk, though, and you’ll have to either clear the gunk from the area or find a regrown area to replenish it. It’s harrowing being on low health while clearing out gunk just as the gunk is reforming behind you, obscuring your view. 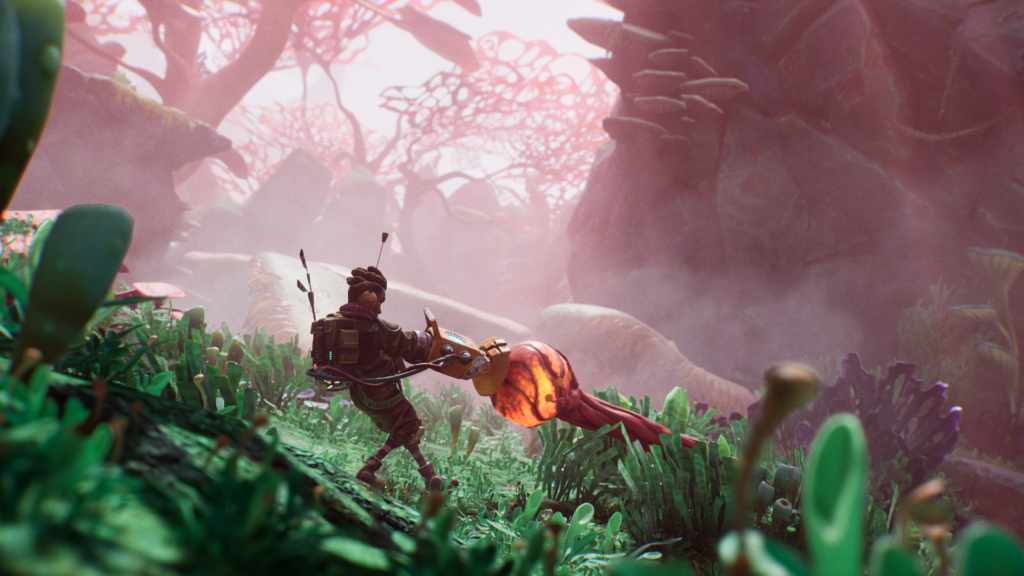 Overly gorgeous, and uses a very specific palette of colors. I played the game on PC in 1440p, and it never quite felt or looked like a next-gen game, but it is extremely pretty. I do love seeing the removal of the gunk transform this desaturated area of black and red to vibrant, lush colors, almost in an instant. Performance wise, the game runs great at all times hovering close to 165fps. There was one section near the end of the game where the framerate would just tank inexpecliably. Thankfully this cleared up, and it didn’t happen again up until the credits. 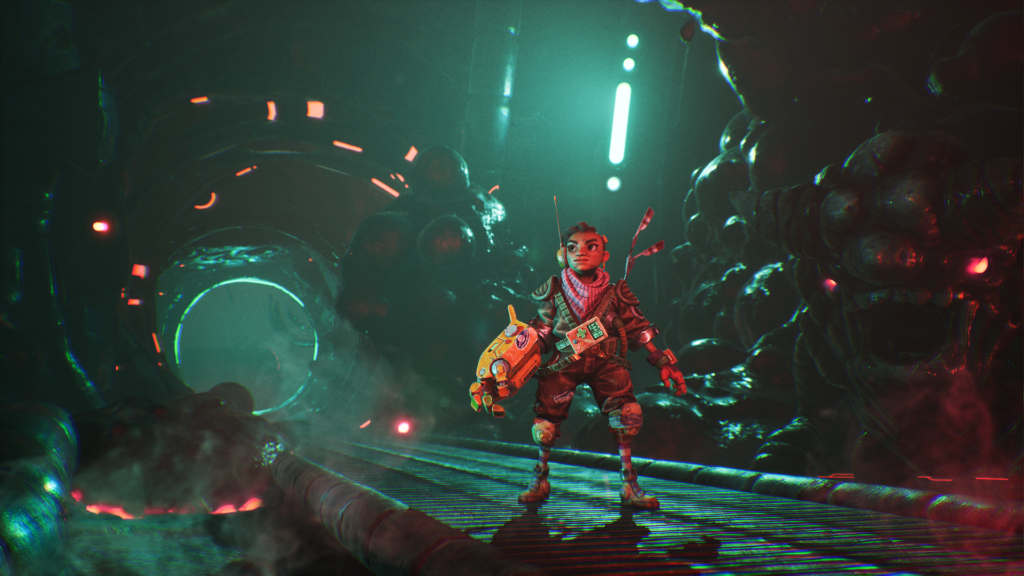 While it’s not a SteamWorld game, it still has that Image & Form charm we know so well with Thunderful Development. It took me 3.5 hours to see the end of the game, got 14 out of 16 upgrades, and am missing only 5 achievements. It’s very fun to just navigate and explore this world, taking in the sights and sounds It may be short-lived, but it’s a highly enjoyable adventure I want more of. The Gunk establishes itself as a unique and memorable journey worth taking.