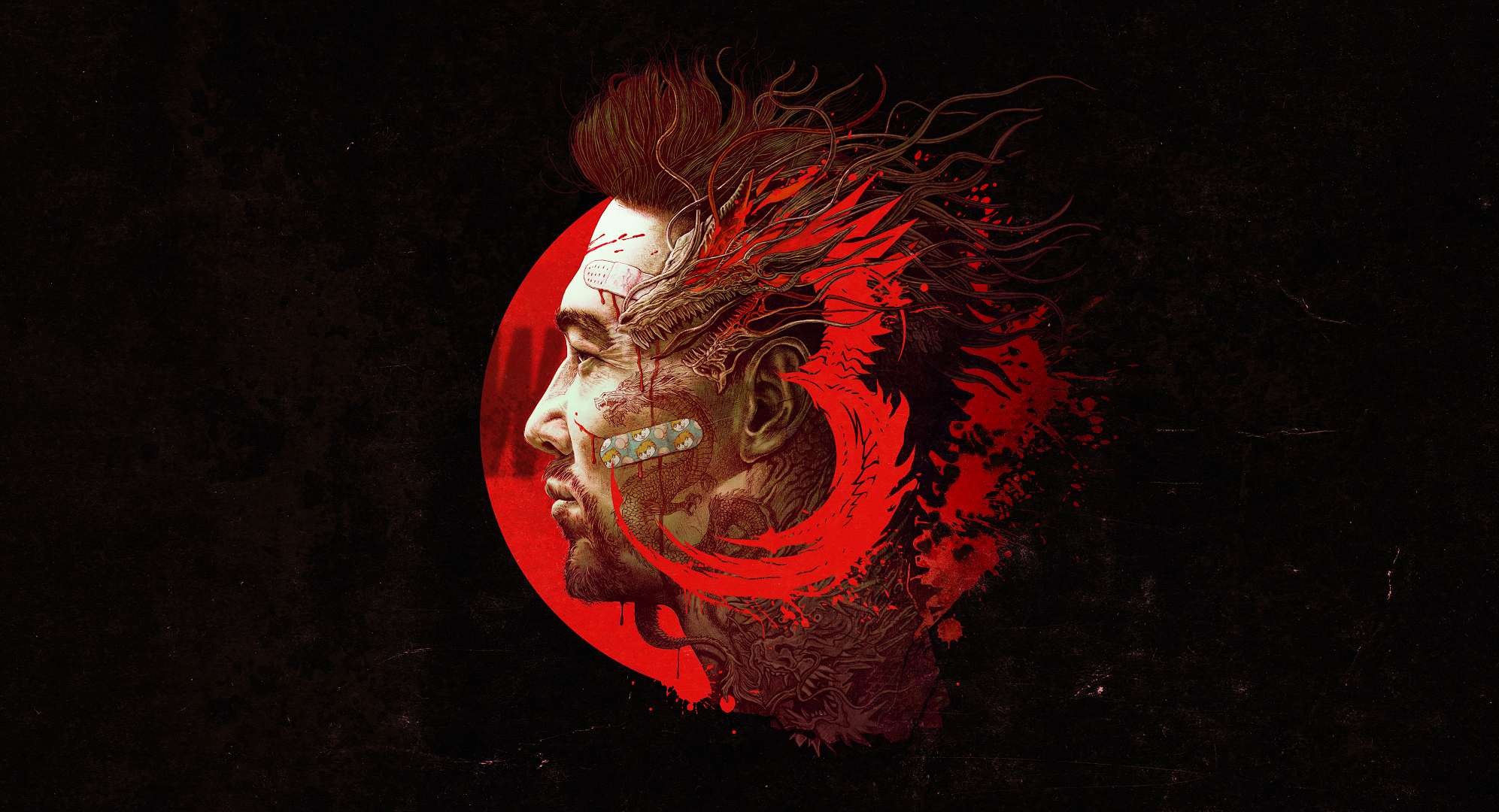 The resurrection of Shadow Warrior is one I never thought I’d see, and for it be so successful over the past nine years is a joy all its own. Flying Wild Hog was either predicting or echoing something in the first-person shooter genre, and always doing it better. With Shadow Warrior (2013) was DOOM (2016) before DOOM (2016). Shadow Warrior 2, this was a looter shooter like a mini-Borderlands, focusing on longevity and replayability. Now we have Shadow Warrior 3, a DOOM Eternal-like that’s more a continuation of the first game that chases its prior success. Unfortunately, Shadow Warrior 3 is a bit of a lo note for the series as Lo Wang and the gang go on a bloodthirsty yet ephemeral adventure.

Lo Wang is having a crisis of identity. He’s grown out his hair, his cave is in shambles, and he’s unwittingly unleashed a dragon unto the world that’s decimated the human race. Despite the grave circumstances, the dialogue and interactions between what characters remain will generally elicit a laugh to get by. After rallying from his long-time adversary Zilla, he finally sets out to right the wrongs he’s created by killing the dragon once and for all.

Simply put, Shadow Warrior 3 is back to basics – for better and worse. Flying Wild Hog chose to abandon the looter shooter aspect, and stick to a run-and-gun first-person shooter. Sounds good, right? To start we get a settings menu with clearly defined Low, Medium, and High without the extra “Very High” or “Ultra” settings. The difficulty though is a bit of a let down, as it’s lacking the encouragement from Shadow Warrior 2’s selection for playing on easier difficulties and not shaming players. That said, this game is unbelievably easy, even on the Normal difficulty where it felt like it was playing itself. Even though I didn’t feel challenged until the final boss, playing on Hard was the only difficulty that felt like it was testing my skills in any way. It’s the one I’d recommend, but of course choose what suits you best. 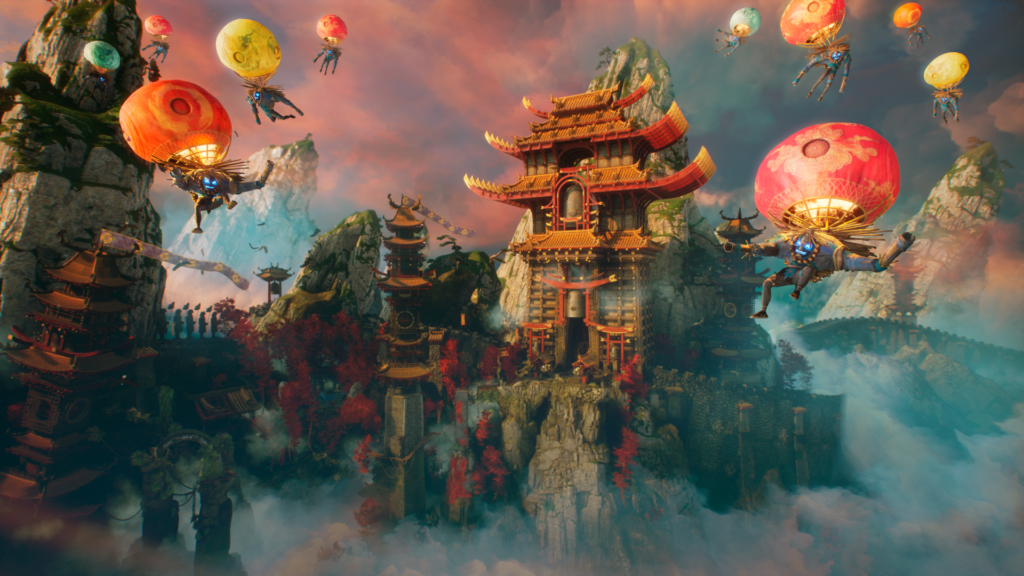 The weapons are pared down to just a katana, revolver, four-barrel shotgun, dual SMGs, grenade launcher, rail gun, and a shuriken spitter that launches spinning sawblades. This makes combat just as fast and frenetic, allowing you to swap to the weapons you need for the situation at hand. One change I really like is that using your katana is just as simple as right-clicking, it’s a fantastic improvement. This does mean that you can’t aim down sights anymore, but it just isn’t necessary here. Elemental damage still plays a big role as it did in _Shadow Warrior 2_, but has been distilled for readability: red items are for fire damage, blue for ice damage, and yellow to deal electric damage. It being color-coded this was better to digest during the thick of combat to do what I needed. I really love all the changes here.

Levels are very linear this time, offering little to no exploration except for finding upgrade tokens. It’s kinetic, and gory throughout. I said that Shadow Warrior 3 feels a lot like DOOM Eternal, this is exemplified best by the fact that when you kill an enemy with the katana, they drop ammo. When you initiate a finisher, a system whereby you accrue tokens to do so, you’ll regain health and some ammo with it. These finishers also have the bonus of stealing a weapon from the enemy you’ve killed like a fireworks gatling gun, a frozen shuriken, or a gigantic greatsword that cuts easier than a hot knife through butter. The pacing is all over the place, as cutscenes will often interrupt the player during some action to bring the player to the next area. It’s a momentum killer, but it’s so jarring every time it happens, and it happens a lot. 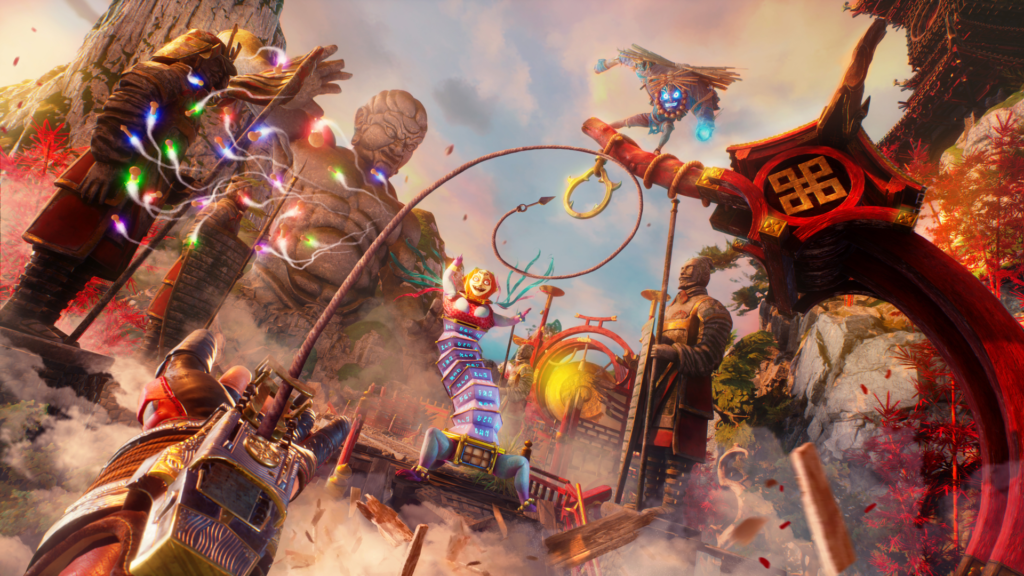 The upgrade system is rather straightforward, offering two types: weapon and character. In order to invest in an upgrade, you have to pick up the requisite tokens f rom any level. Upgrade costs become exponential with each tier. Character upgrades consist of things like doing greater elemental damage, making your chi blast more powerful, or regenerating health over time. Weapon upgrades vary per weapon, but the shotgun can be upgraded not to require reloads or the shuriken spitter to be charged to fire three projectiles at once. To aid in attaining the upgrade tokens, there’s in-game challenges for killing enemies in a certain way, or simply doing enough damage to receive a token. You’re encouraged to upgrade, and it’s all freedom of choice how you enhance Lo Wang’s abilities.

Lo Wang just moves so well this time around. It’s like he’s practiced some parkour between games, because his skillset for traversal now allows for wall-running, climbing, and utilizing a grappling hook. What seems now to be a pre-requisite for games the past couple of years, most recently Dying Light 2 (link). Hilariously, Lo Wang himself acknowledges this fact. The grappling hook has multiple functions. In combat, I didn’t use it much but I would pull elemental items towards me, or stagger enemies with it. And there was one time where I used it to keep myself in the air while regenerating health. It’s a great inclusion having the grappling hook, but its usefulness is mostly defined by having to navigate the levels at breakneck speeds over combat scenarios. 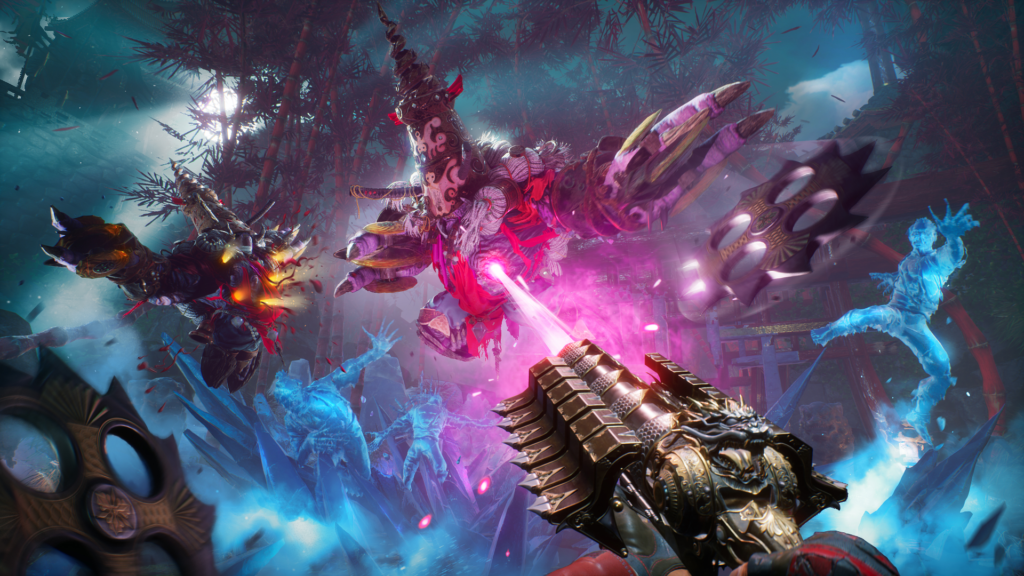 Shadow Warrior 3 is scary short, spanning just 11 chapters that took me just about four hours to complete. For a comparison, Shadow Warrior (2013) had 17 chapters and Shadow Warrior 2 had 13 chapters (this was complimented by nearly endless side missions to embark on). In this time, I got 34 of the 38 achievements, with the remainder being very easy to attain. Shadow Warrior 3 doesn’t offer coop either online or off, you can’t replay levels for any reason (like to acquire upgrade tokens you missed), and there’s not even an option to play the game through New Game+. All of these features and options present in prior games is asking a lot — especially at its $50 price tag. There’s just not a lot going on, and very little incentive to return for a second trip. 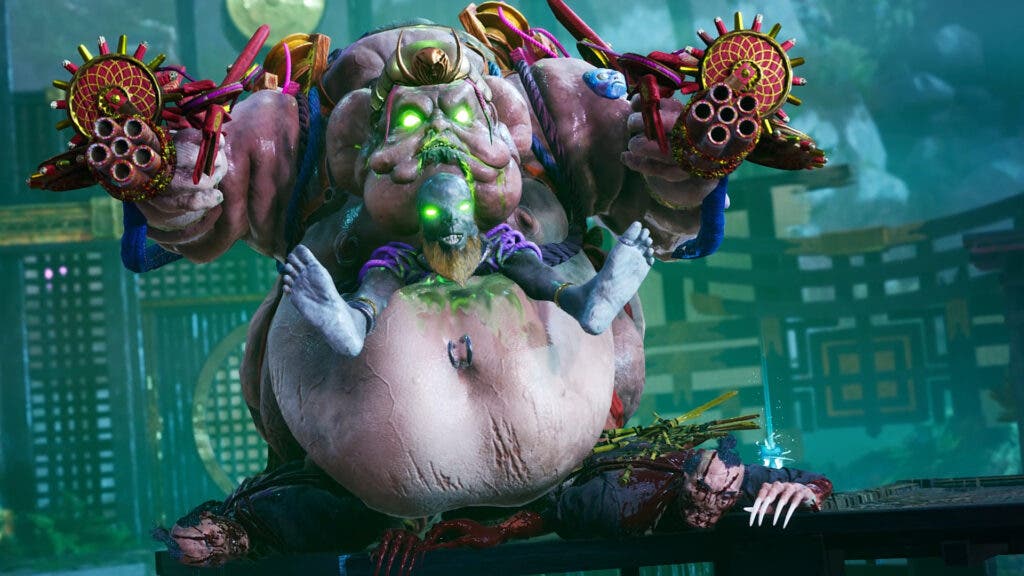 Playing the game with every setting set to the highest, I would get 165fps in just the exploration parts of a level. That changes when enemies spawn into the level, as framerate starts to *ahem* tank to around 60fps. This is where DLSS helps, turning that on to Quality mode, I was able to sustain 100fps through all encounters. The game also includes NVIDIA Reflex to reduce any latency. Unfortunately and confusingly, Depth of Field can’t be completely turned off, and the best I could do was set it to low. The Field of View settings are for the FOV of the world, not the weapon. Thankfully I was never motion sick. The game is just always smooth and looks absolutely gorgeous in every scene. 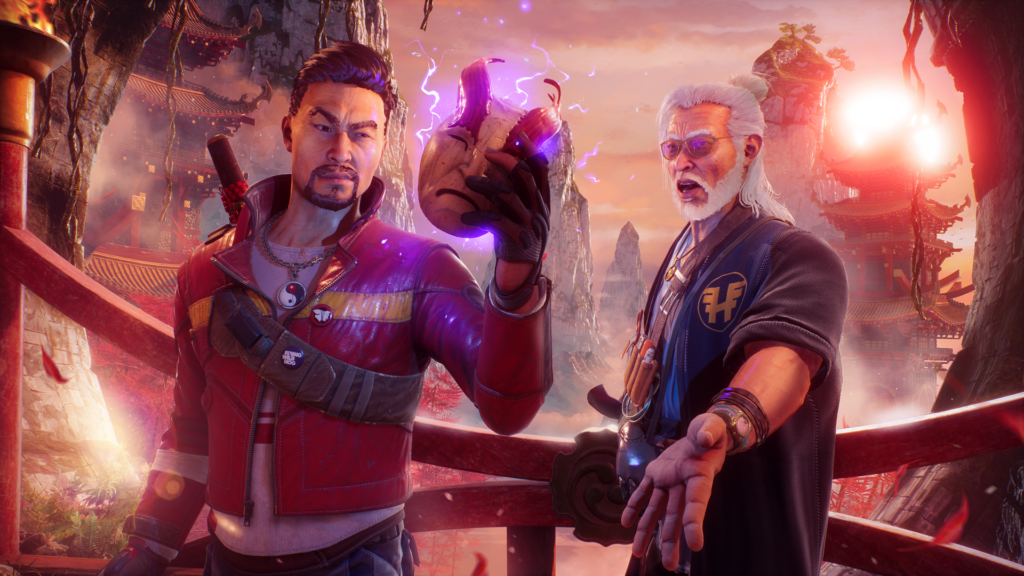 Shadow Warrior 3 is not a bad time, it just isn’t as forward thinking as its predecessors. It’s a mess of ideas with a flawed execution that leads to disappointment. There’s a healthy armory of fun weapons to shoot, upgrades to acquire, and finishers that are fantastically bloody to keep you entertained. Lo Wang’s movement and world traversal is the best it’s ever been. Flying Wild Hog gets so much right, but the parts they don’t overshadow the whole experience. Shadow Warrior 3 is so staggeringly linear and short, and without any real replayability to speak of, is a game that falls on its own sword.