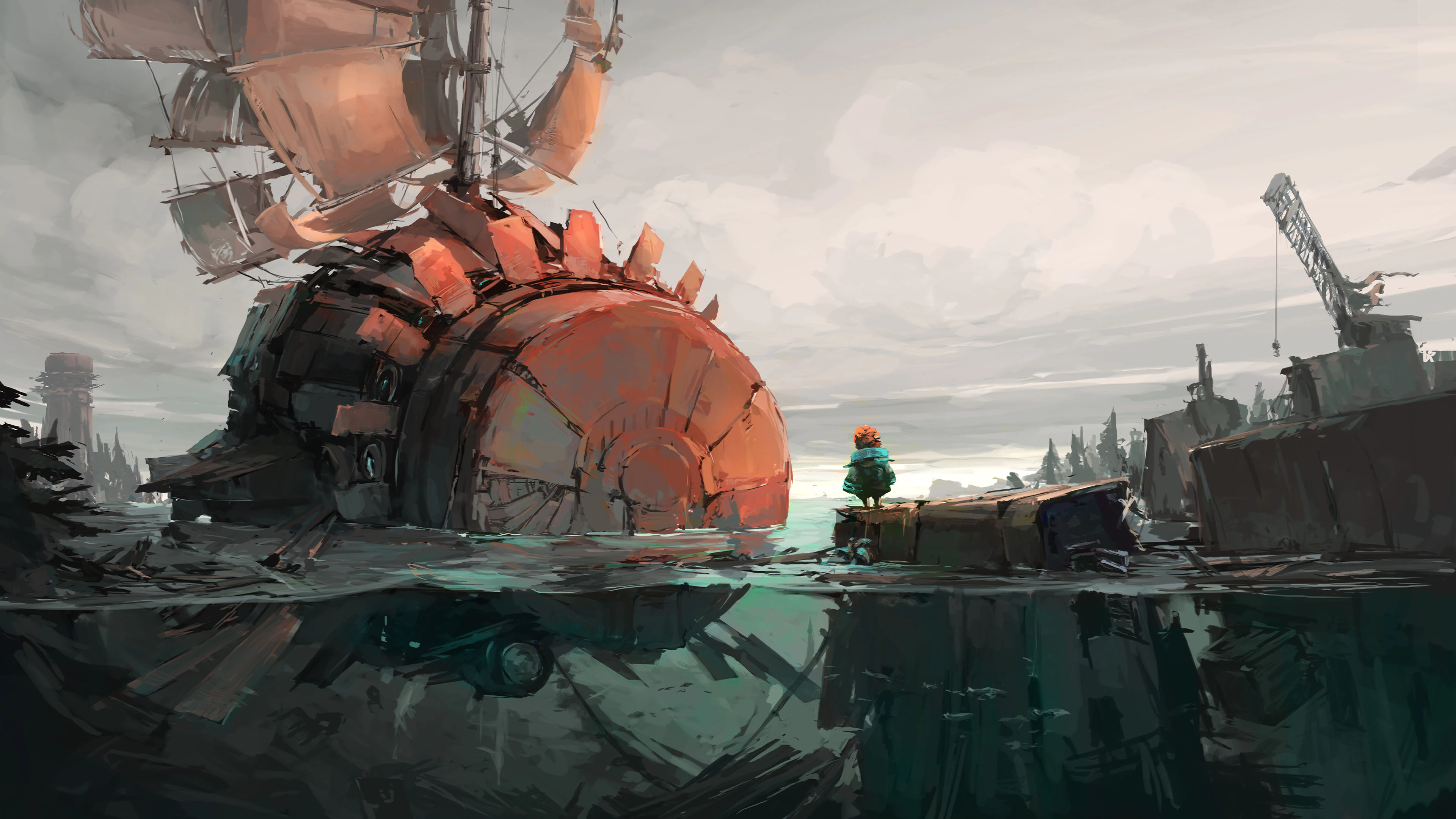 When I received code for FAR: Changing Tides, I had never played 2018’s FAR: Lone Sails from developer Okomotive. Once I sat down with it, I was absolutely enraptured by it and even completed it in a single sitting. While I’m glad I finally experienced it, I just wish I hadn’t been missing out all these years. Changing Tides is the long-awaited follow-up that adds meaningful new mechanics and depth throughout your odyssey. You’ll find that the FAR series has no spoken words, no text to display, yet says so much in spite of that. It’s a game series that shows, rather than tells. FAR: Changing Tides demands very little of you, but it will give so much in return for your efforts. Like Lone Sails before it, FAR: Changing Tides is also among my favorite games in recent memory, making both essential plays for anyone. 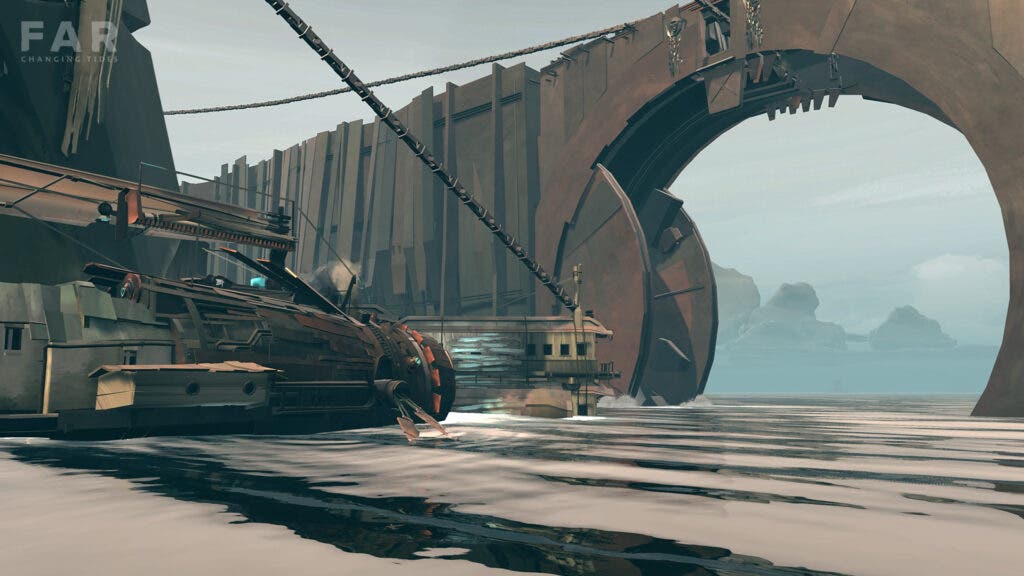 FAR: Changing Tides takes place on a 2D plane with a gorgeous painted art style set in some sort of post-apocalyptic setting that has you setting sail across open-water towards a destination yet to be determined, with civilization unknown. This is no doubt a lonely and isolating experience. The music is subtle and is merely an accompaniment to the sounds of water splashing, engines turning, and the wind ripping into your sails. While there’s no grand conspiracy to unravel or antagonist to square off against, it’s no less engaging and fascinating to take in as much as the world is willing to tell you.

In this vehicle adventure game will have you diving head first into water to set up your sails to catch the wind to propel you. There’s some clever coloring on the ship itself that indicates how fast you’re going. This is further exemplified when the sails are full, and the secondary sail springs to life. It’s really clever design that constantly impresses. Over time you’ll acquire new or replacement modules that let you trawl the ocean floor for loot, upgrade your engine capabilities, or add new sections of the ship to utilize. While FAR: Lone Sails was a strictly left-to-right journey, Changing Tides now includes navigating up and down as your ship can now be a full-on submarine. The literal depths you’ll go are what make this a standout. 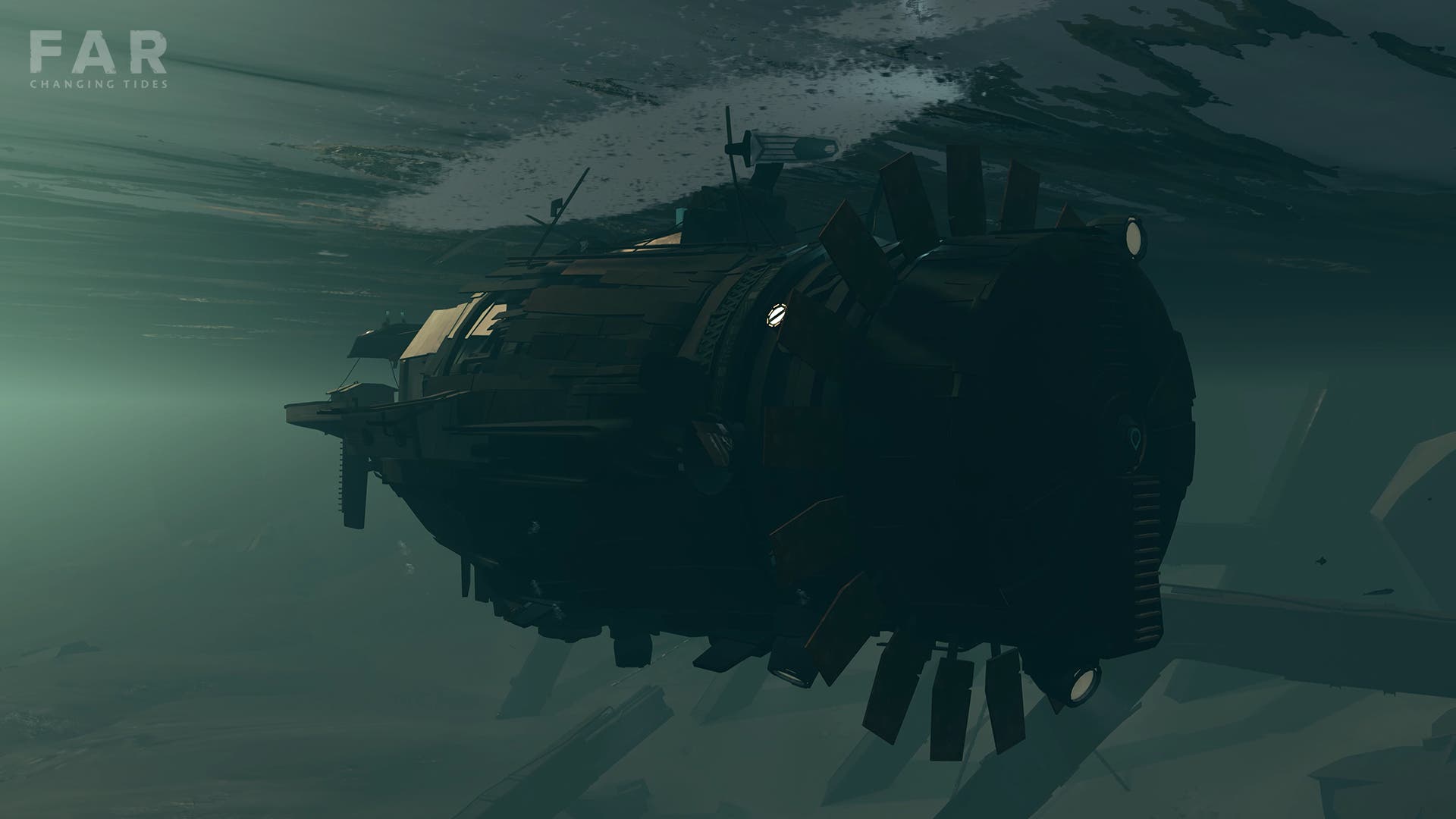 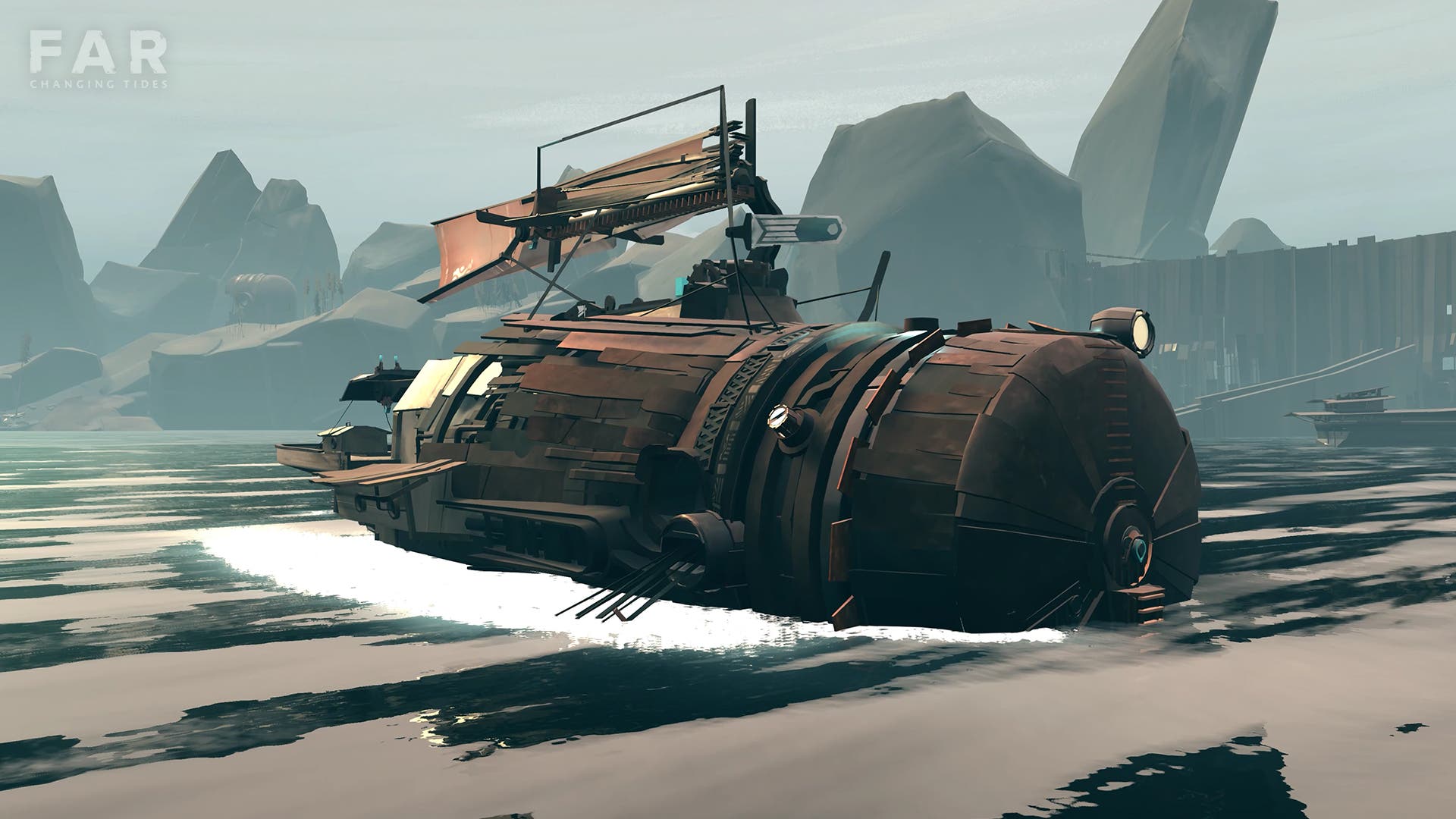 At the core, navigating in FAR: Changing Tides is all about momentum. In the event there’s no wind or you have to submerge yourself, the ship’s engine must be powered. There’s junk and metal scraps in scarcity, but find some and your ship will happily take it, and burn to use as fuel. In order to make it combust, there’s an air pump that you can use to stoke it like you would on an old locomotive. There’s a sonar system that will seek out metal scraps so you can stop and collect to keep using fuel when wind isn’t available. Eventually you’ll gain an overcharge boost that will scoot you above or below the water in no time. In my experience, I always had enough fuel to get by, or could use wind as a backup to continue, and never found myself in a place where I would get stuck or stranded.

Changing Tides has some rather low stakes to its gameplay. Thanks to a self-contained diving suit, complete with a propeller, there’s no possibility of drowning. For reasons unexplained, there’s no fall damage you’ll ever take no matter how high of a jump it is. It’s never anything that detracts from my enjoyment, as it enhanced it. There will be times that you’ll have to leave the ship, due to some sort of obstacle or roadblock blocking your path forward. It’s here where you will collect fuel or have to open a gate or solve some puzzle – sometimes in order to do both. Solving a puzzle without any hints, or even words to suggest something to play means they’re rather intuitive. Puzzles will involve carrying an object from one place to another, replacing bad equipment, or retriving an object that simply opens the door blocking your progress. It’s all done in-world that has logic and cohesion as to not break immersion. 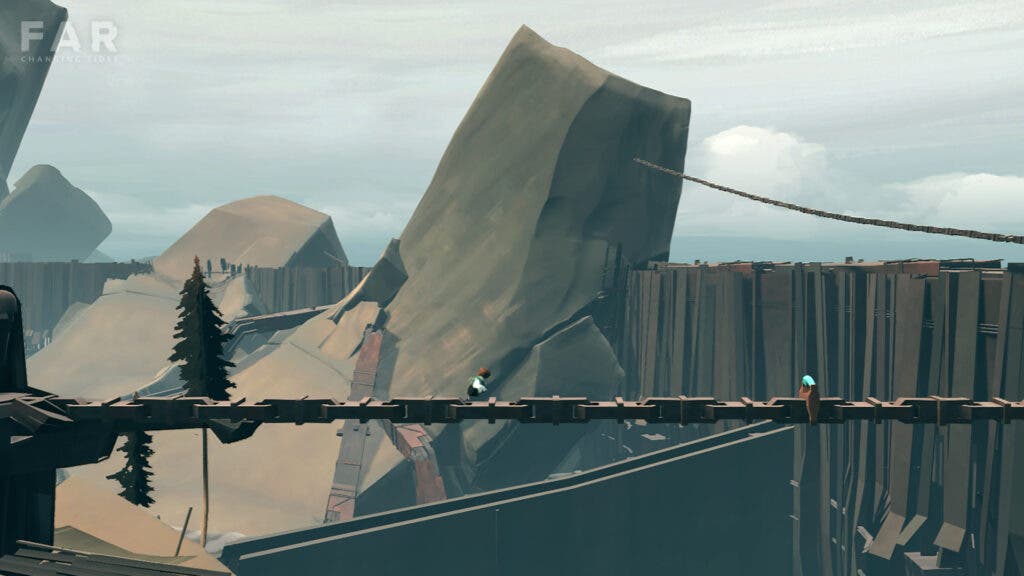 There’s a natural locomotion compared to its predecessor. Navigating this ship is different and in some cases jarring. You’ll have developed habits and muscle memory to navigate the ship most efficiently. It does take some time to get used to, but it’s jarring nonetheless – though this is something that would affect returning players. It won’t be long before you’re putting the ship in relationship, forming a bond with it, and accessing all of the components like its second nature. From the sails, to the engine, to the winch, every part of the ship feels like an extension of you.

Simply put, Changing Tides looks like an oil painting come to life, in every respect. Lone Sails, had a palette of muted colors with stark reds as accents. With Changing Tides, Okomotive opted for sea blues as accents to match its aquatic backdrop. The FAR series is what you take screenshots for, or just stop and take in all the environmental details both above and below the water to take in all the astonishing views. The game knows this, and the camera pulls back to show you its these moments with a grand scale. This is five hours well-spent, with many more to clean-up achievements or another playthrough. When you compare this to my time spent in Lone Sails, I completed that in about three hours, but again that was all in one sitting. Okomotive really expanded on mechanics, systems, and the activities in the game that never felt like Changing Tides was doing too much. Given that there’s an achievement for completing the game in 210 minutes, it certainly can be done much faster. 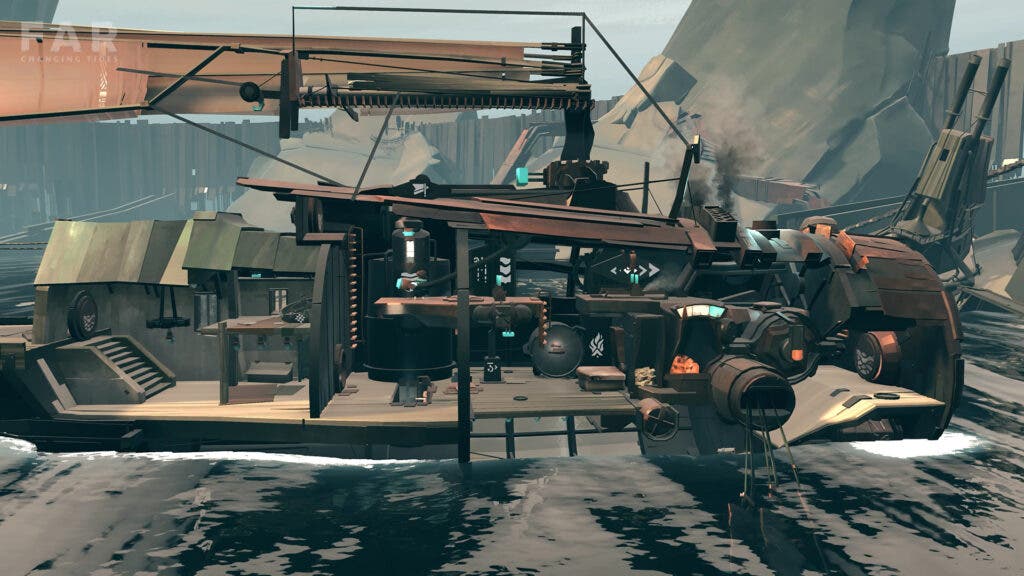 FAR: Changing Tides offers a richer and fuller experience over its predecessor. Okomotive went above and beyond to make the puzzles more involved and elaborate, yet intuitive to solve rather quickly. The environmental storytelling of Changing Tides is equally compelling and emotionally impactful. There’s not a demanding aspect of the game, and it likes to let you breathe for some truly relaxing moments. While you should play FAR: Lone Sails first, they’re complimentary to one another and I must implore that you play both regardless of order. FAR: Changing Tides is a wonderful sequel, it has so many wondrous moments of greatness that you won’t forget.