Strange Horticulture. Hmmm, that’s quite a strange name; why is it strange? Well, because the game is strange! How strange you ask? Well, if you give me a few minutes of your time, you may figure out why. 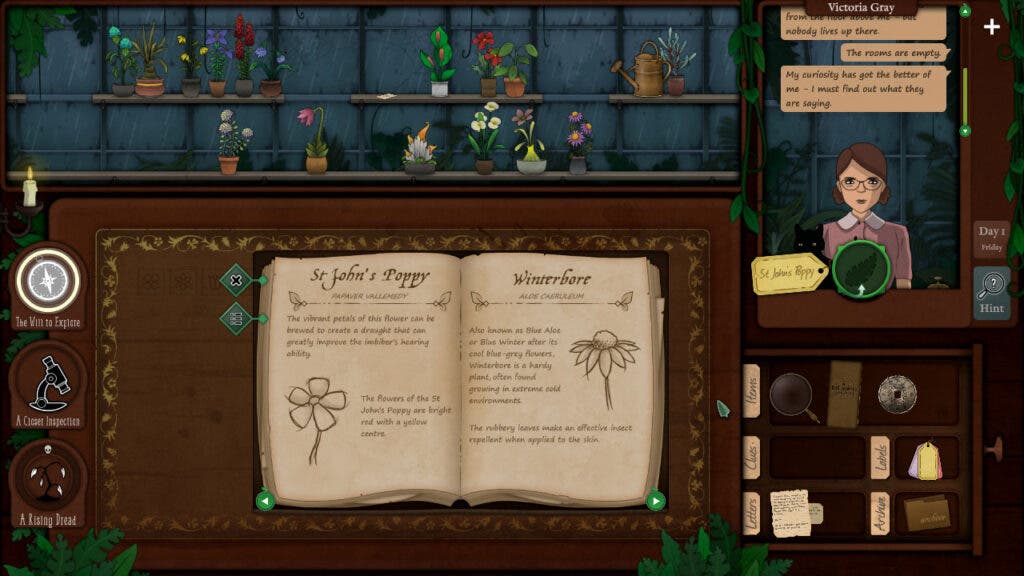 Firstly, the developers at Bad Viking use the word horticulture. Now, I may just be a middle schooler, and those big words can be quite confusing, but I know that it actually means cultivating plants. Strange Horticulture also uses it for garden management! Second, the stories themselves are strange, but they are awesome! Most of the stories told in the game are about death and stuff. Even if all of that is strange, the music isn’t too bad. I found it to be calming yet mysterious at the same time!

The voice acting was really good too. It was actually somehow calming in a weird way! The sound effects were very fitting, too; the game does a little jingle at the end of each customer you “serve.” as if they were leaving your store. In fact, most of the audio in the game was actually kind of helpful in giving the game its mysterious feel. 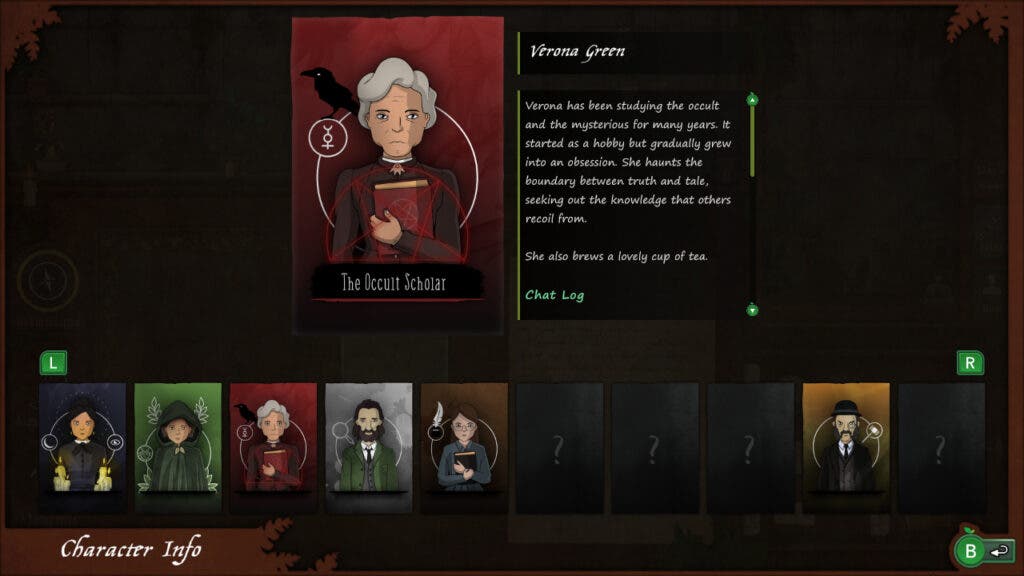 So how do you play Strange Horticulture? Well, first, you ring the bell, and the customer comes up to the window. They give a summary of what plant they are looking for, then I browse through my book of plants and see if I have that plant’s entry. If I have it, then I look at the details of the plant, and it will give me some clues as to what it looks like, what it does to the human body, and it’ll even tell what that plant smells like. I’ll take this information and pick a few flowers in my shop that I think are the customer’s flowers. I’ll look at the plant under a magnifying glass and see if anything matches what’s written in the book. If I don’t have an entry, I will look at the map and look for all the clues I can. The right clues will take me to the place to find the mysterious plant.

Further in the game, you will get a customer that will give you the ability to make elixirs, and in your first encounter with them, you’ll have to look at all three flower pictures and put them in the item that makes the elixirs. You will get a new elixir if you put in the right flowers. So the game doesn’t just sell plants; it also sells elixirs. 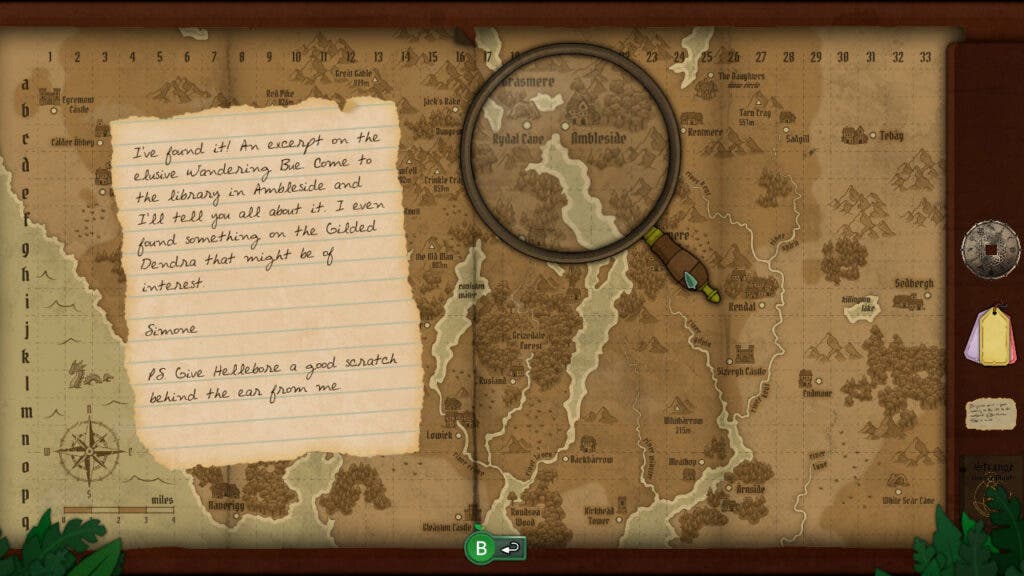 When you start labeling your plants, remember to either pull the labels from the drawer or turn on the game’s auto labeling. You have to label the plants, and if you don’t take the labels out of the storage drawer, you’ll be confused about what you have and what you’ll need to do. Because I missed labeling a few times, I ran into what I thought was a glitch. I thought the “Ok” button was actually off-screen for me, causing me to be unable to continue. My first thought was that my game was glitching. After sitting there and analyzing the situation, it turned out I just wasn’t using my brain enough. All I needed to do was take out the labels before I began labeling the plants. Without labels, the game didn’t understand what I was attempting to do with the plants. So don’t be like me, label, label, label.

The developers did add some features that will help you play the game on the Switch. In fact, I found the Switch version to be a little easier because, on the PC, it is very easy to mix up the buttons; there are just so many of them. The Switch version can also be played on the touchscreen, and I think it’s better than a mouse. You can zoom in on everything, and the buttons for the zoom make a lot of sense. To zoom, you use the ZL and ZR shoulder buttons right in front of your fingers where you naturally hold the Switch. This layout makes it much easier than taking your hands off the switch to zoom in manually like you would on a tablet. Even after you zoom, you can use the right joystick and move the camera around to look all over the screen. 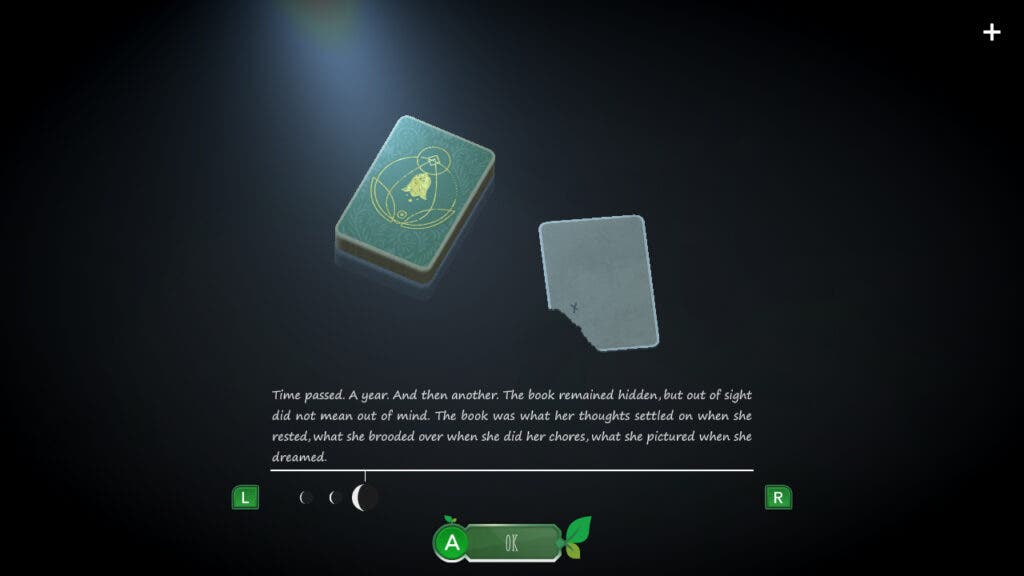 Strange Horticulture gets pretty tough as you get farther into it, but I think it’s a nice level of difficulty. It’s not difficult the same way you would play a puzzle game, like stacking a block on top of another block to win; you have to really think about the puzzles in Strange Horticulture, just like on the “A Rising Dead ” puzzles. The “A Rising Dead” puzzles are given to you after you give too many customers the wrong plants. Although these puzzles can be pretty hard, they are also very fun at the same time. The “A Rising Dead” puzzles aren’t the only ones in the game either. For example, there are ones where you have to fit all of the pieces into one circle, a circle that looks like a logo. Then there is one where you must find the right key to fit a keyhole.

You get to explore a map where you can travel to different places, but your customers will stay with you for some reason. I don’t know why, but they just do. Every day the game will give you a daily puzzle to complete through the use of cards. These cards are clues that involve the map that disintegrates and disappears after each day. Sadly, you don’t get any new characters for you to play as, but there are about ten special people who come to the shop often. There are also some strangers that you usually don’t meet again. Another fun part I found is how you have to figure out which flowers and plants are which. Strange Horticulture wants you to identify plants that you’ve never seen before. Thankfully you have a book that includes a bunch of pages dedicated to the different plants and names. The book also provides hints to identify which flowers or plants a customer may want. 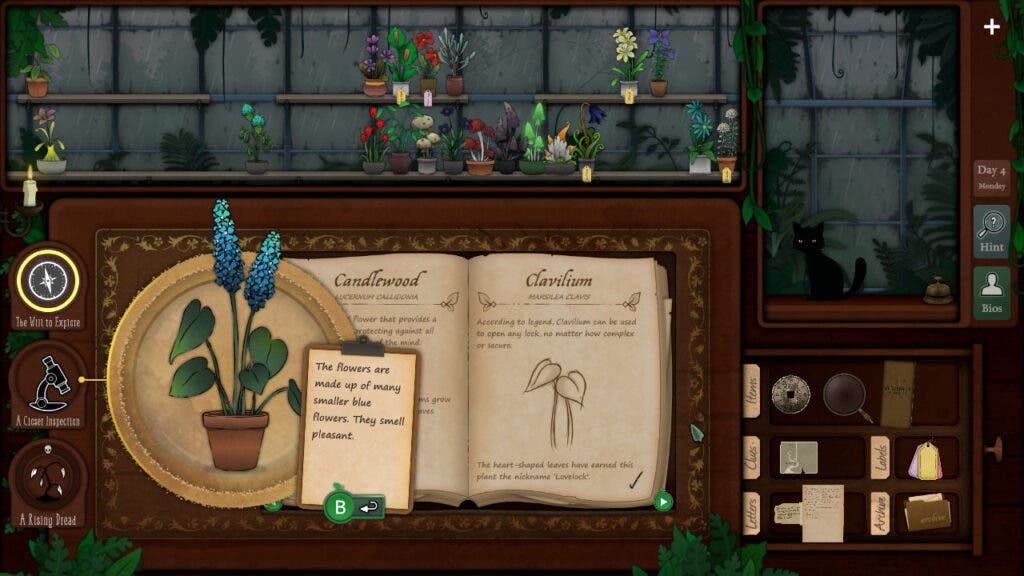 This game was super unexpected, and it is so worth the money, so if this review interested you in Strange Horticulture, you might want to get it. I have to say it’s a solid four from me. I know Strange Horticulture is a very strange game, but one that lives up to its title. Thank you so much for taking the time to read my review! If you want to read more of my reviews, keep a close eye on the site! Be brave, bold, and share some peace.