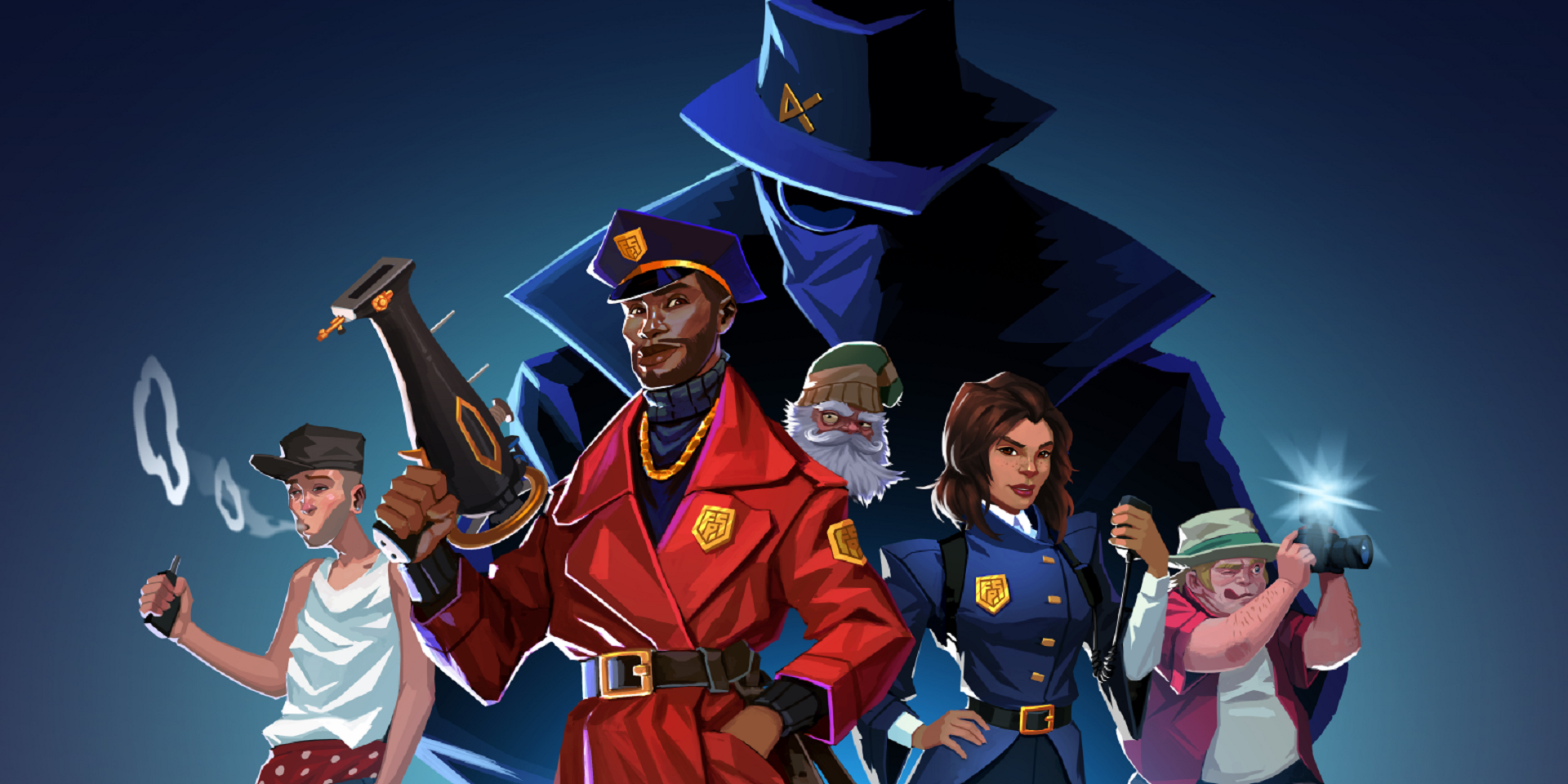 When a game grips you from its earliest moments and plasters a stupid grin on your face, you know it’s good. Fashion Police Squad is a retro first-person shooter among a sea of others lately, but it’s unlike anything else out there. Developer Mopeful Games didn’t just rely on a fresh premise to get by, it’s backed up tight gameplay and smart writing. The fact that this is a game about correcting people’s fashion disasters is what makes it all so funny. because at the end of the day you’re not killing anyone, you’re solving crimes – fashion crimes. Fashion Police Squad gets so much right about first-person shooters without being violent or bloody, an achievement unto itself – but this is is a can’t miss title. 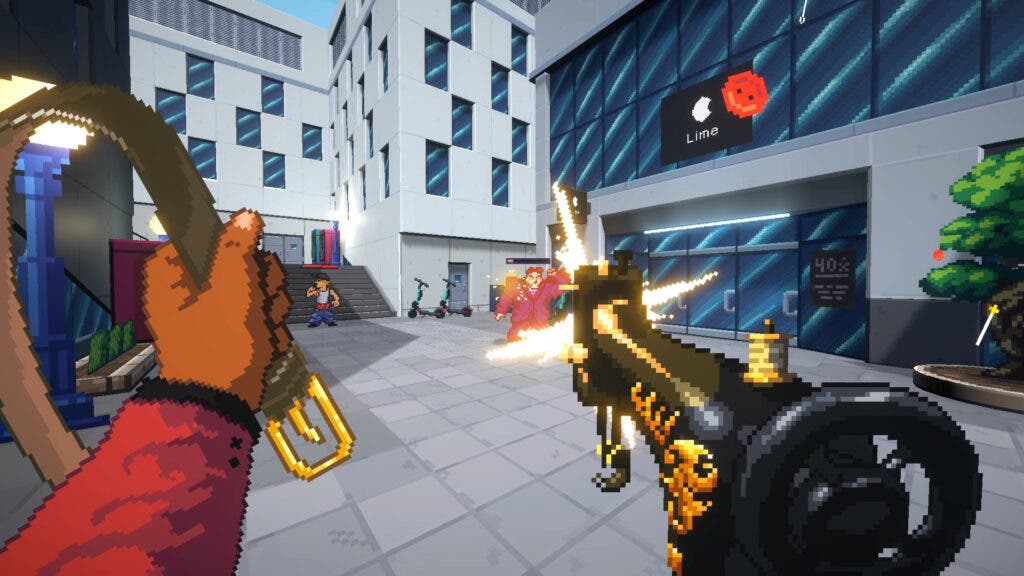 Stepping into the latest shoes of Sergeant Des, accompanied over the radio by Officer Haley, you are part of the Fashion Police Squad – or FPS for short. Trendopolis is under attack, and it’s up to you and your partner to stop the latest fashion crimes plaguing the city, but to uncover who’s behind it all. By the game’s end, I did lose the thread of what all was going on and who’s who, but through all its twists and turns I enjoyed my time with the game. I rolled credits just under five hours for the thirteen levels for this 2.5D shooter, which feels just right even though I wanted more of it.

With this being a non-violent shooter, how does this work exactly? Well I’m so glad you asked. The weapons paint balls, very fashionable ones at that. All weapons have infinite ammo, reducing the concerns and general scarcity around ammo, allowing you to enjoy the story and gameplay. You’ll get the 2DYE4 Carbine Elite, a shotgun with a limited drum magazine that fires a concentrated spread. The alt-fire will absorb color from objects to charge up its shots, where it’ll burst fire without spending additional ammo. Next is a Tailormade submachine gun that fires fast, and it’s alternate fire is a grenade launcher that sticks to enemies to stun them. Next is the sock gnome, personifying the creatures behind all those lost socks that disappear from your dryer. The infinite water hose of the Wet Ones is a treat, whose alt-fire is the only weapon to let you aim down sights and shoot a limited yet powerful assault rifle barrage. Lastly you’ve got the Wardrobe launcher, a rocket launcher that alt fire can split the shot into five smaller missiles for a wider dispersal. These weapons gradually unlock as you progress through each level, but their unveiling felt like it was time to expand. After a while, you’ll buildup a fab meter that when full, lets you unleash an ultimate attack, the fab slap. The fab slap lets you slap some fashion sense into people for one-hit attacks with auto-targeting. It’s an immensely satisfying attack that is to be used sparingly. While it may seem like a limited arsenal, I actually prefer this where you end up not using some weapons, because every weapon has a purpose here. 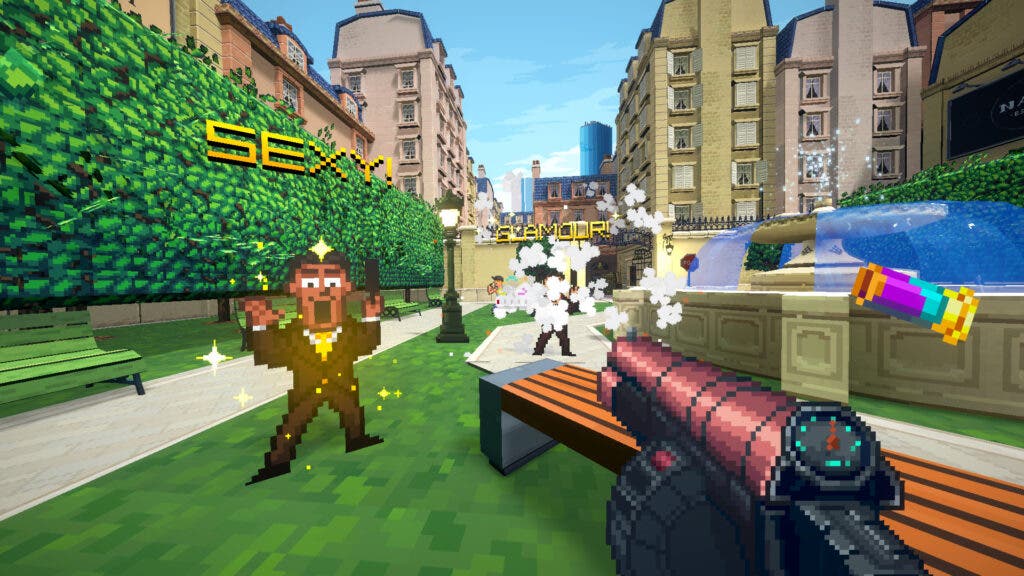 There’s a lot to gush about, but Fashion Police Squad’s diverse enemy roster demands certain weapons be used to combat the fashion threat. You literally cannot use any other weapon that the enemy wasn’t designed for, and it keeps combat dynamic while you memorize what enemy gets shot by what. Early enemies like the dull suits that are your standard enemies that can be dispatched simply with the shotgun. Then you’ve got the scooter bois, who are your fast movers and attackers. The alternate fire of the shotgun hoovers the neon off their body, to relax them. You do always have access to your belt, which stuns most enemies, where there’s a quick and charged attack. It’s primary purpose is to pull up the pants of vapers who are showing their underwear. As an added bonus of the belt, it lets you swing like Spider-Man at specific points in the game. Then you’ve got your fire bros, which resemble Guy Fieri and can be put out after some concentrated fire from the Wet Ones. You’ve got the brute types who are hilariously a stacked trio of dull suits, men in speedos and wearing crocs, and lastly it wouldn’t be a first-person shooter in 2022 without a Karen character, but the inclusion is in-line with the humor of the game. After fixing their fashion faux pas, an announcer will always exclaim some form of compliment like “noice!”, “elegant!”, or “fierce!”. You can turn the announcer off if it gets too annoying or grating, but it actually works.

Each of the levels feel unique and exciting, with city blocks, beaches, sewers (cue the Civvie11 sewer count), and rooftops. Now maybe it’s just subway design in general, but Mission 6 reminded me of the opening level of Soldier of Fortune, it felt exactly the same in some respects. There’s actually a pair of involved sniper levels, which surprised me and gave me great glee. In these you are protecting a fashion show from poorly dressed attendees, and have to swap up to three ammos types to fix them before they enter, lest they hurt the live show. You’ll aim for the head to fix their hair, body to correct badly fitting garments, and going for feet shots to rid them of gaudy shoes. A turret level even makes an appearance in the game, and that too had much more depth than you’d think, and is one of the more memorable ones outside of being the only one. The creativity is unbounding, and I never got tired of whatever the game threw at me. 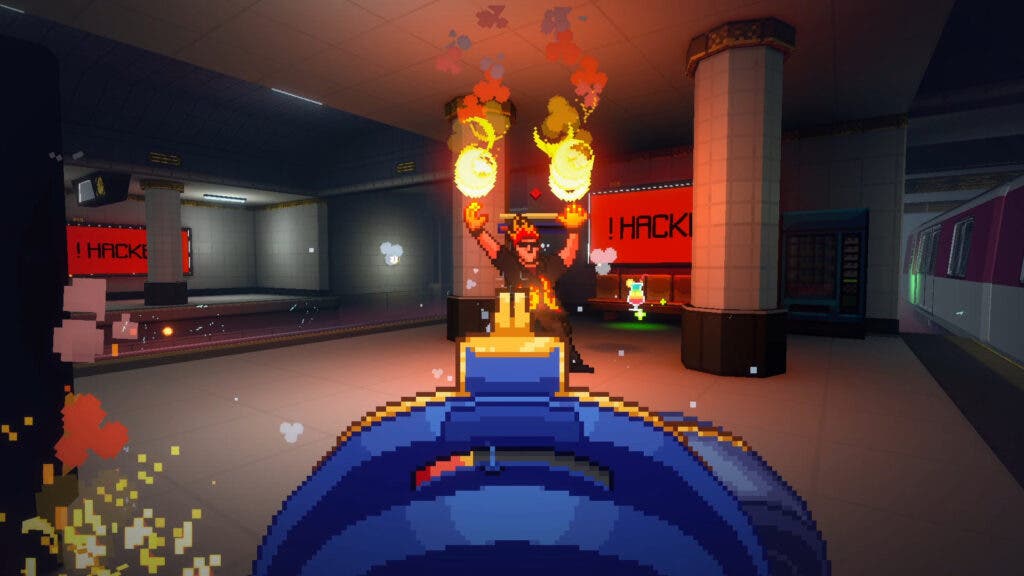 As you play through these levels, they’re linear of course, but offer lots of room to explore and move around. It won’t be long before you’re stopped, unable to progress because a colored (red, green, or blue) ribbon is blocking your way, and to bypass it, you’ll need scissors to cut them away. Naturally the ribbon is a parallel to a door, and the scissors are a key, and it’s a really good gag. Logically nothing holds you back, especially when enemy characters walk around them in cutscenes. Finding the similitude with what we already know about first-person shooters for the fashion-oriented premise makes every joke and pun land even better.

When you complete a mission, it tracks the time taken, crimes solved, swag confiscated, and secrets found. Which I can attest the secrets are well hidden, but once you start stumbling across some, you’ll be keen to find more. You can then replay levels to get everything you might’ve missed the first time through. In your exploration, you’ll unlock new drip. These are clothing items that add buffs like starting you out with 120% health, but it can’t go higher. Or selecting accessories where your belt cools down faster and hits harder. There’s of course trade-offs in all of these scenarios, but it ever-so-slightly adjusts the gameplay in fun ways. 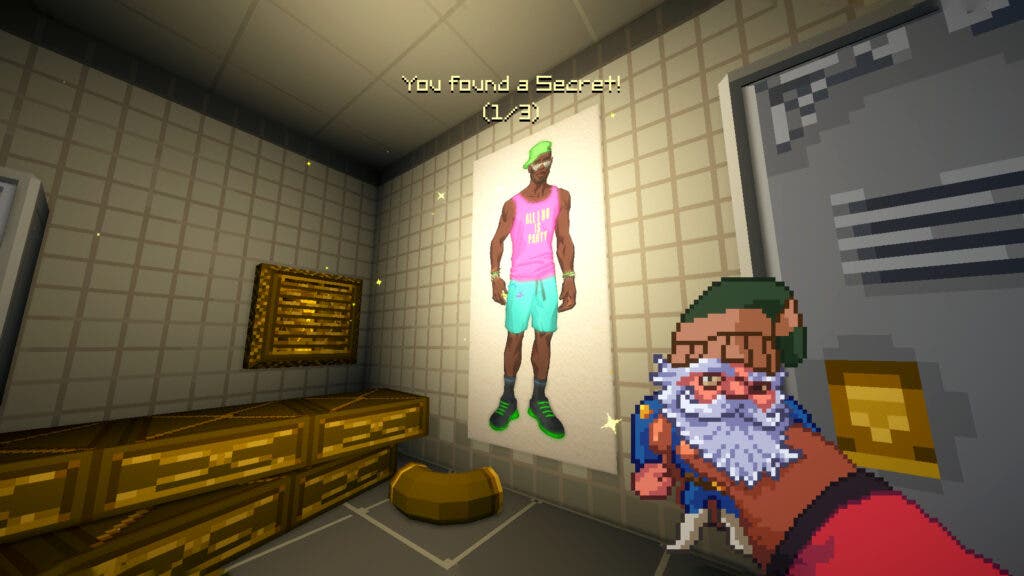 There aren’t many of them to be found, but the boss fights are really inventive, as it tests your ability to use all the weapons in your arsenal. There was one exhausting boss fight that followed the rule of threes, but kind of in the most frustrating of ways – part of me thinks that’s on purpose. The final boss was refreshing, even introducing new mechanics and enemies up until the last moment. There’s four difficulties to choose from while playing the game. I chose the third one titled “You Reap What You Sew”, and felt the “Normal” difficulty of most other shooters, and is what I’d recommend for most everyone. Other elements of this game that I enjoy is that you don’t die, you get worn out, the game is real cheeky about avoiding all the standard tropes of first-person shooters.

Now this is a game that runs on checkpoints only, so that means there’s no quick or manual saving. I found it fairly forgiving on when and where it saves, and there were only a few places I wish it were more generous. As much as I like this game, I did run into a few minor bugs. Like when swinging using the belt, buildings wouldn’t load and I’d end up missing, making for a frustrating segment. Or there’d be times I’d try to attach to something and it wouldn’t connect, the penalty for missing this was minimal, and so was my frustration. While I don’t think it detracts from anything, but often the game will just scrap certain mechanics after a few levels, never to return. 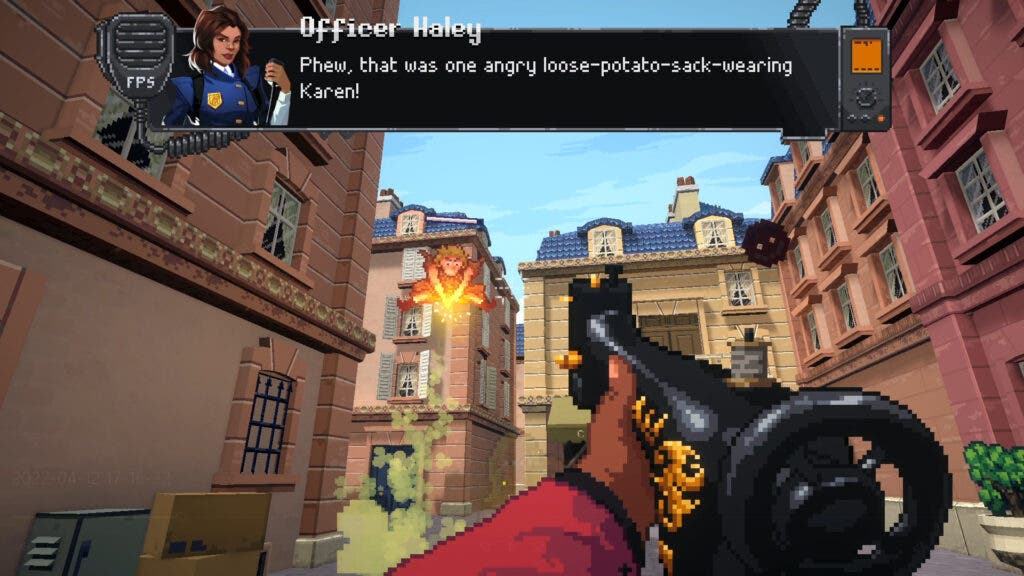 While the game pokes fun at things or uses a lot of puns for its humor, it’s never at the expense of itself. Fashion Police Squad is not a joke game, it’s actually a seriously cool game with clever parodies and homages to first-person shooters of the past. In fact, it’s innovative for the genre that could offer a dynamic shift of non-violent shooters in the future. It’s witty and smart, and Mopeful Games really have something special here. Fashion Police Squad is Avant Garde, shaking up what a first-person shooter can be for others to follow.