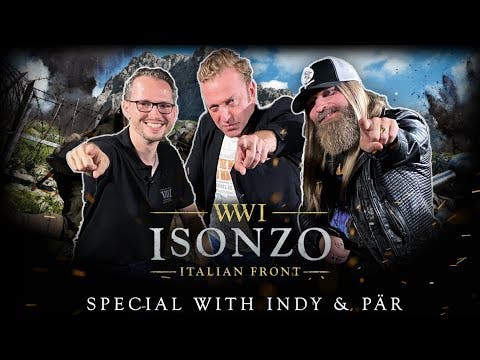 ALKMAAR, THE NETHERLANDS, August 30, 2022 – Isonzo is releasing in just two weeks, on September 13th, with pre-orders starting today on the Xbox One and Series X/S! To celebrate, Creative Director Jos Hoebe sat down with Sabaton member Pär Sundström and World Wars historian Indy Neidell to get a first look at the new WW1 game.

The base game will be available for $29.99/€29.99/£24.99 with a 10% discount during the Xbox pre-order period. Players can also choose a Deluxe Edition or Collector’s Edition adding more customization to the characters in-game. Furthermore, players can already wishlist the game on Steam, PlayStation, Xbox and the Epic Games Store.

Authenticity and historical accuracy are the staples of the WW1 Game Series. Pär and Indy are both familiar with World War One, each in their own way. For many years, Indy was the writer and host of The Great War, a YouTube channel which covered the events of the First World War. In his time working on the channel, he visited Fort Douaumont together with the Verdun developers. He is currently working on a similar YouTube project WW2 in Real Time, and as such he also spends many hours buried deep within the history of both wars.

Pär is the bassist, manager and lyricist of metal band Sabaton, which has based most of their albums on major battles, wars and other impactful historical events. Their two last albums, the most recent one from March this year, cover the First World War. As one of the lyricists of the band, Pär has done a lot of research on World War I. In 2019, Sabaton and Indy joined forces with Sabaton History to discuss the events that form the basis of Sabaton’s songs. Because of their overlapping interest in the Great War, Jos invited Pär and Indy to have a look at Isonzo and review the authenticity as well as other elements in the game. To celebrate the opening of the Xbox pre-orders, the resulting video is now live! You can watch the discussion and accompanying footage through the following link: https://youtu.be/cZKegBMBWCA.

“We’re very excited for the launch of the game and are honored to be part of this special collaboration with Indy and Pär, who are both experts at presenting WW1 history in their own ways. We spent a lot of time and resources recreating historical details in-game, and it was great to shine a light on them. We hope you all enjoy this first glimpse of Isonzo,” says Jos Hoebe (co-founder and Creative Director of the WW1 Game Series). Together with the collab video, the Xbox pre-orders started today. Make sure to pre-order now in order to get the exclusive bonus pack: Avanti Savoia!

The Avanti Savoia Units Pack consists of ten additional options for character customisation, including one unique uniform and piece of headgear for both the Italian and Austro-Hungarian armies. The pack also adds six new facial features that characters can sport, ranging from various typical WW1 mustaches to a special pair of glasses.

Although it is not possible to pre-order the game on PC or PlayStation, players who purchase the game within the first week after launch on the 13th of September are also given access to the Avanti Savoia Pack.