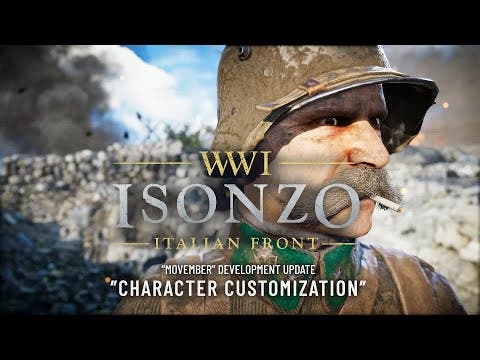 ALKMAAR, THE NETHERLANDS, November 30, 2021 – Isonzo is almost ready for the next phase: beta testing! Following successful alpha testing, Isonzo’s release date has been set for Early 2022. With this new development phase there are also new reveals!

A long desired visual customization feature has been announced for the WW1 Alpine Warfare FPS Isonzo! This. Means. Mustaches! A Movember video shows off one of the historic mustaches that’ll be on offer – at release there’ll be everything from real soup-strainers to more elegant styles! The WW1 Game Series community have also been participating in the Movember movement to raise awareness for men’s health.

Isonzo is available to wishlist now on Steam, PlayStation, and soon on Xbox.

If you already want to experience what the WW1 Game Series has to offer, the two earlier games in the series, Verdun and Tannenberg, are part of the winter holiday sales on Steam, PlayStation and Xbox!

Isonzo will introduce players to high-altitude Alpine warfare in Northeast Italy. It breaks new ground in the Alps with a complete feature overhaul – including the brand new historically driven Offensive game mode, authentic period technologies like flare guns to call in support AND character customization! Cosmetic customization is something people have wanted since the launch of Verdun – especially for mustaches. Eye catching facial hair is associated with the Great War, and while previous titles in the WW1 Game Series featured fancy mustaches, this is the first time each player will be able to choose their own. It’s not just mustaches, of course…

The latest Isonzo Intel dev blog goes into detail about the options that will be available – from uniforms and headgear to faces and of course facial hair! Earlier dev diaries cover topics ranging from the new Offensive game mode and class system to rifle grenades and WW1 history. Read the customization dev blog on Steam.

Customization options in Isonzo will be linked to the specific Offensives, so that uniforms will be period correct and there will be clear differences in the appearance of early war soldiers versus later war members of the same class.

Movember is a charity for men’s health, which started out in 2003 as two Australian friends growing mustaches to see if they could bring them back into fashion. The First World War saw advances in health care, generally focused on the men fighting. From the development of plastic surgery to care for soldiers with disfiguring facial injuries, to the partial acceptance and understanding of shell shock – what we’d understand today as post traumatic stress disorder.

The WW1 community and developers support the Movember movement and joined it with the WW1 Game Series as #TheGreatStache. To raise awareness for the charity, history has been shared about both mental health issues faced by those affected by WW1, and the moustaches that were common (or even required) at the time.

The WW1 Game Series community took part in the event and ended up with some impressive mustaches. Some highlights from our community can be found on Twitter!

Fans were also asked to vote for their favorite WW1 moustache, and were rewarded by a video featuring the winning moustache in-game as part of the new customization system.

The upcoming third game in the WW1 Game Series is progressing nicely, and a release date has been set for Early 2022!

Alpha testers have been enjoying and providing valuable feedback on Isonzo’s Alpine Warfare, which sets the stage for a release early next year. Furthermore, the switch to a closed beta – and perhaps an open beta soon after – will not be too long coming. Make sure to apply for the closed beta here and wishlist Isonzo already on Steam, PlayStation, and soon on Xbox!

New to the WW1 Game Series? The two earlier games Verdun and Tannenberg (set on the Western and Eastern Fronts respectively) are discounted as part of the holiday sales on Steam, PlayStation and Xbox!

Developer and M2H co-founder Matt Hergaarden said: “The reaction from alpha testers has been very promising, and we’re ready to open up Isonzo to more players. They’ll have the chance to experiment with the customization system as well as everything else the game has to offer. We’re looking forward to getting more useful comments from our community!”

New to the WW1 Game Series? The two earlier games Verdun and Tannenberg (set on the Western and Eastern Fronts respectively) are discounted as part of the holiday sales on Steam, PlayStation and Xbox!