Isonzo is the third in a series of World War I multiplayer games from Blackmill Games that began in 2015. These historical games shine a light on the dark battles that took place during the 1910s. For the Isonzo River area, twelve battles in two years for the two sides took place, with the Italians winning most of the battles against the Austro-Hungarian Empire. Isonzo as a game always impresses both in visuals and gameplay. The tug of war between both factions is evenly matched, offers the most versatility, and makes Isonzo is the best in the series to-date. 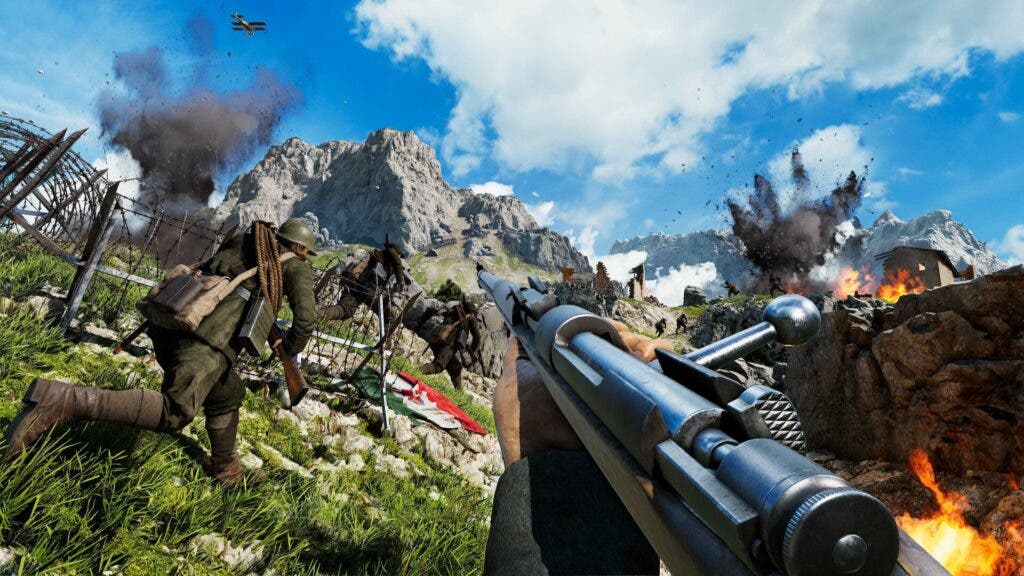 There’s three major offensives you’ll take part in, with six maps reflecting the most important and influential battles of this time period. Loading screens include tips like you might expect, but there’s also history lesson as well, teaching you what you’re fighting for or against. You have the Mountain War offensive that takes place on Dolomiti, or in the Dolomite Mountains. The Strafe Expedition takes place on two maps: Cengio and Fior. And lastly, there’s the 6th Battle of the Isonzo that occurs across Carso, Sabotino, and Gorizia. These historical battles offer offensive and defensive sides, depending on what team you’re on. One side may have a tactical advantage, but that doesn’t ensure a win for either side.

The maps take center stage in Isonzo, with having the most beautiful locations juxtaposed against a horrific war. While there’s only six maps to play on, they are large, varied, and incredibly dense locales that will take a while to learn – especially both sides of the conflict. Gorizia from an attacker perspective starts in rural hills that upon advancing ends up in urban streets. Dolomiti is literally an uphill battle, with almost no respite from the top-down lookers that are on defense. The entrenched, pockmarked battlefields are a sight to behold, and is easily the most gorgeous game of the series and all of World War I depictions. 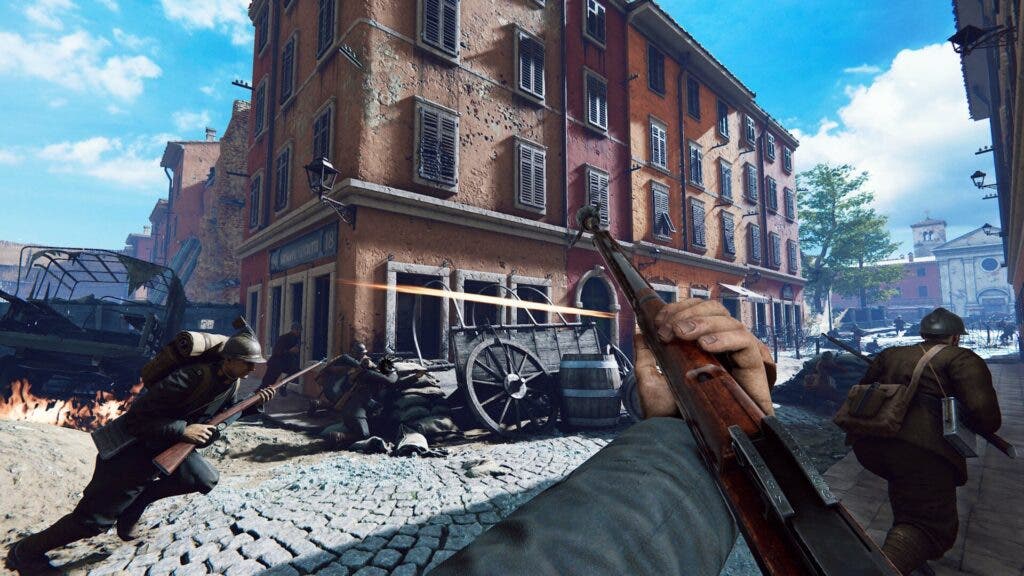 With six classes in the game, there’s no shortage on finding a role that works for you and what you can bring to the team. Officer is the most limited, with only one of two spots to occupy this leadership role. You can have an infinite number of rifleman, which are all-around great. Engineers are limited to seven, opting to build structures and defenses. Assault is limited to five players, who can break down barriers. Mountaineers are limited to seven who can infiltrate and perform recon. Lastly is the marksman, with a limit of four players occupying the sniper role. Each class has its own ranking, up to level 20 with unlocks for both cosmetic and gameplay. The gameplay ones are also like sub-classes, letting you equip buffs for your character. This all feeds into your overall character level.

Like Verdun and Tannenberg before it, there’s a quick time to kill, and it’s really satisfying to hear the ping off of a helmet. It’s just satisfying to land a headshot that’s an instant kill or a body shot on a player low on health. It adds stakes. Should the shot only be a glancing blow, there are bandages you can apply to stop the bleeding and get your health back. Bandages can be applied to others if they need it, and since there’s no dedicated medic class, anyone can heal everyone. Officers from the other side will often request a bombing run, or worse, a mustard gas drop. This will require the team to equip a gas mask, which takes a long time, so you have to be cautious of where you do it. Fail to do so will result in death, and engaging in combat with it on seriously hinders your view. Support classes like Engineers are critical to success by being able to lay sandbags. Then you have other things like placing ammo crates or sniper shields which can aid other classes. There’s some interoperability that can’t be ignored. Multiplayer matches might feel just a little bit smaller this time. The prior two entries supported 64-players, this is a slightly more intimate 48-players across all maps. While this might upset some, I can’t say I ever felt sixteen less players on any given map was a downgrade. Certainly there was a decision behind this, but the limited number doesn’t hinder the sheer amount of chaos that happens. When there aren’t enough real players to populate the match, the game will fill with bots. And boy, the bot game is strong. Even on their average setting, you can’t hesitate to kill them or they’ll drop you in an instant.

In order to stay accurate to the war and the weapons soldiers would have used per side, there isn’t a huge armory of weapons. But for the ones that are there are unlocked through short challenges that add a layer of challenge to the game on top of the multiplayer itself. Everything is a single-fire, bolt-action rifle of some sort, with some being able to fire faster than others with the trade-off being less damage per shot. In a pinch, the bayonet at the end of your gun might just save your life, especially when reloading. 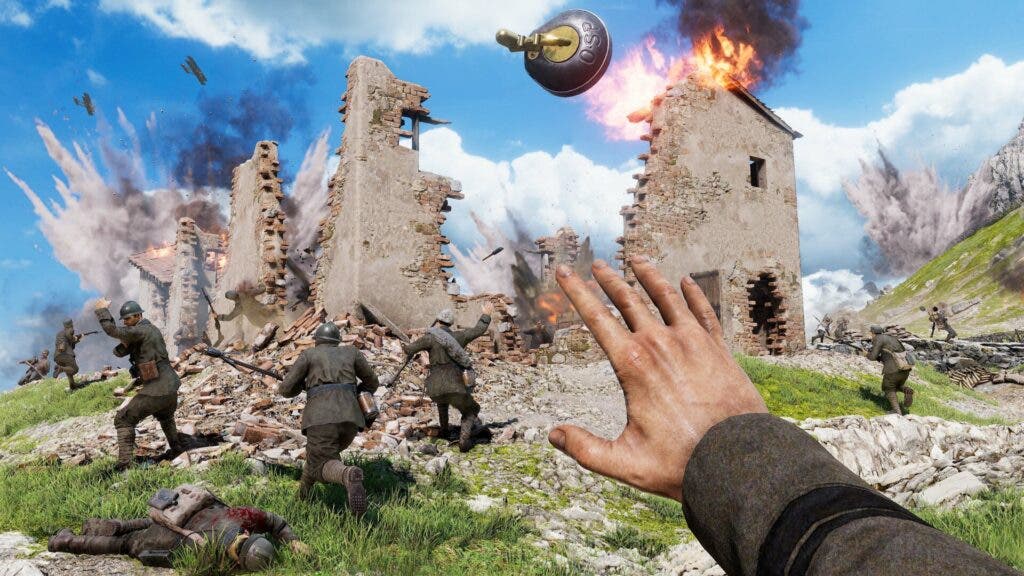 At the end of match screen, you’re given a very detailed breakdown of everyone’s accomplishments in the match. You’ll be able to cycle through screens of highlights, offensives, match stats, progression, and seeing the overall scoreboard. It’s really informative and a great way to see who did what in any given match that swayed things. The soundtrack operatic and beautiful, accompanying perusing menus or amping up for a final attack before you run out of tickets, it never ceases to amaze.

At the barracks, you can outfit your classes and customize the cosmetics for both the Kingdom of Italy and Austro-Hungarian Empire sides. Your profile is housed in the main menu to review your progress and stastics with all the games you’ve played. Lastly, and perhaps most importantly the game’s menu also has a “WWI Front” sub-menu that lets you swap between all of the games.

Isonzo shouldn’t be overlooked, it’s the most beautiful and haunting World War I multiplayer game I’ve played. Each map is distinct from one another, and the careful selection of encounters highlights the trials and tribulations both sides faced during this two-year war. While there’s only six maps, they offer different approaches to offense and defense during the lengthy and endurance-style matches. Isonzo a historically accurate and deadly authentic multiplayer shooter that teaches you about the horrors of war as much as it entertains.