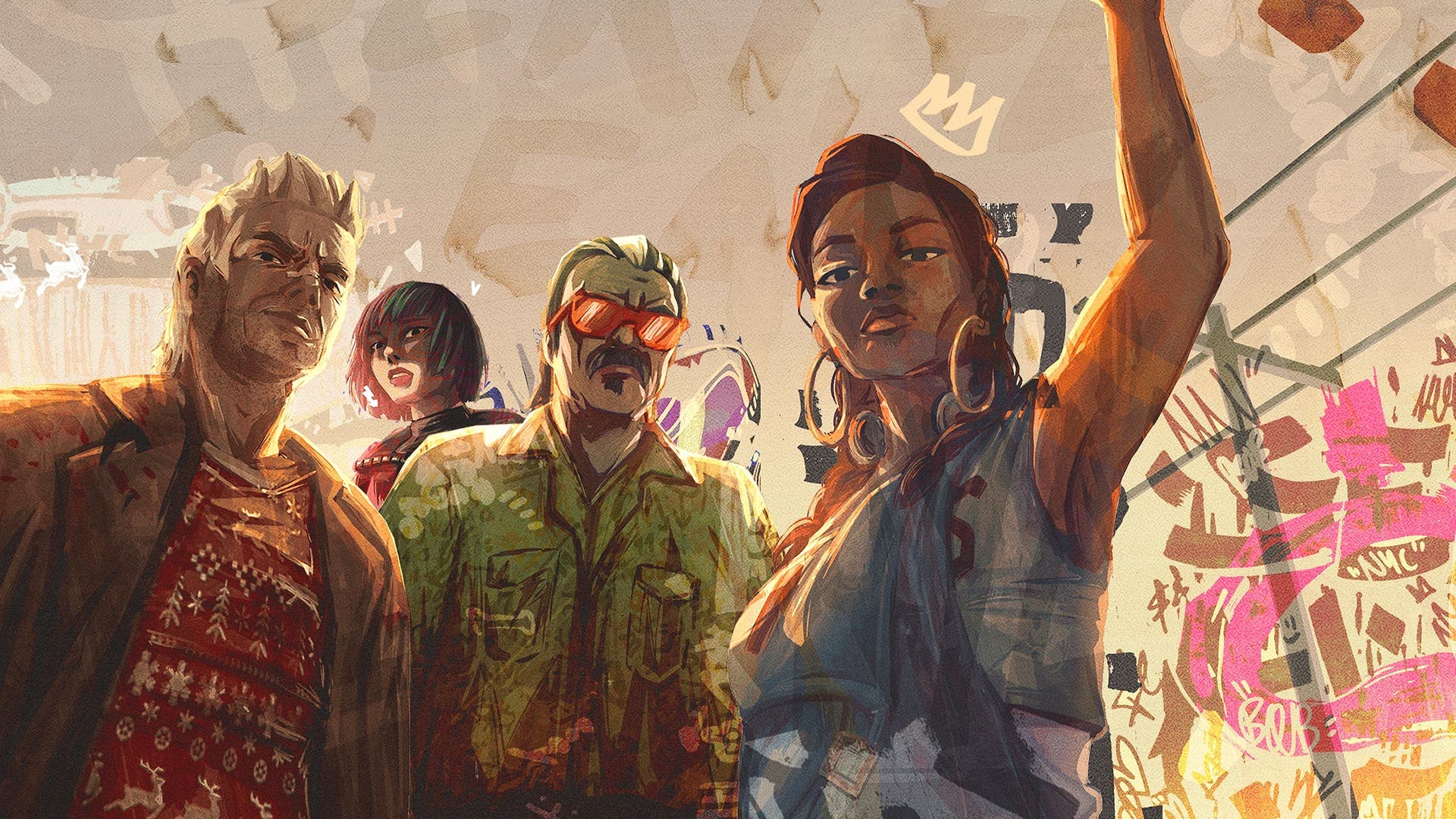 Cleaners are everywhere, and no I don’t mean the ones doing a legitimate cleaning of crime scenes, it’s – you know – the ones that erase all traces of evidence to avoid incrimination. Entertainment and media has even begun to put them on all full display in recent years. First you’ve got “The Cleaner” nickname that AEW wrestler Kenny Omega has gone by. Then there’s the “Specialized Waste Disposal” crew that comes to clean-up John Wick’s home. Five years after the original, Serial Cleaners is a twist on the stealth genre that elevates everything about the original to be a stellar sequel about cleaning up messes, not making them. 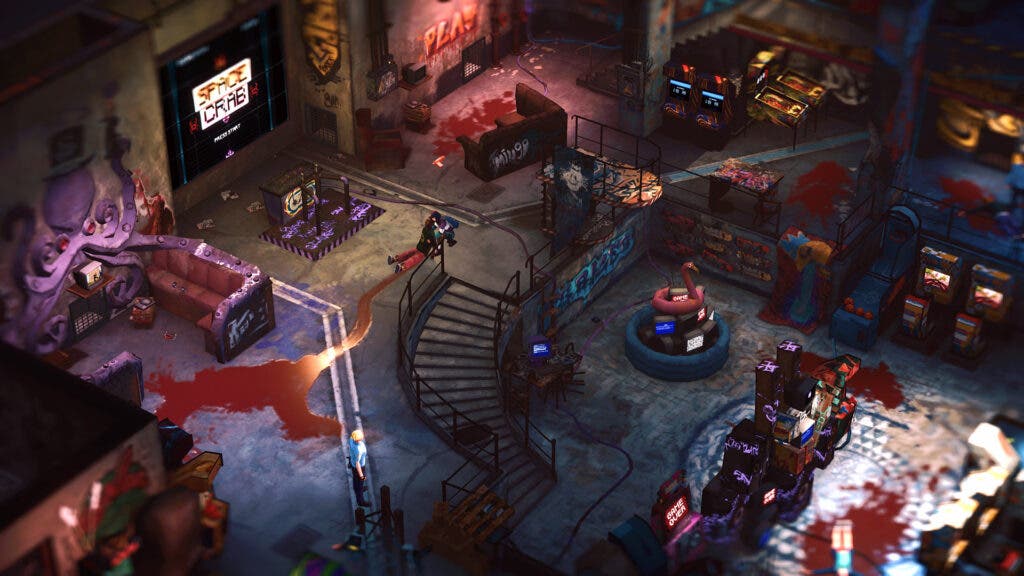 We’re on the cusp of the 21st Century as four characters spend New Year’s Eve in New York City together, reminiscing for the past decade as 1999 slips away. Told through a series of flashbacks, the gang recounts the work they’ve done for the mob by cleaning up their messes, with the trials and tribulations that go along with it. Returning as a playable character is Bob, our mustachioed squeaky cleaner with attention to detail and immaculate taste. Next is the appropriately named Psycho, and after his introduction learn that his trademark chainsaw allows him to carve up the dead to transport them for disposal. A perk is that anyone witnessing this will instantly faint, allowing him to get away clean. Arguably he’s the most tedious to play as he creates more things to carry one-by-one. Then we have Lati, an artist who can distract with graffiti, and is highly-mobile character that is able to mantle over walls and move objects. Lastly there’s Vip3r, a young hacker who can disrupt security systems and crawl through vents by using a screwdriver to open them up. During each chapter, you’ll have your choice which character you’ll play as, until all are cycled through. There’s even opportunities to switch between characters if the playstyle isn’t working, but those are few and far between. It is then worth pointing out that there’s multiple endings, so it’d be interesting to replay to make different character decisions to see how they play out. It’s an even bigger bummer then that there’s no level select this time, as I want to try out levels with each one.

Serial Cleaner was a 2D game that was stylized to fit the 1970s setting and the gameplay was arcadey. Even at the time, there was nothing like it, and it was real fun except for the back third of the game becoming too much trial an error. Serial Cleaners is a top-down isometric game in full 3D, character movement has more weight and momentum. Character models and world design feels like games from the late 90s, and it even has the flair of Disco Elysium. All this to say the game has a great look and feel that supersedes its predecessor in every way. 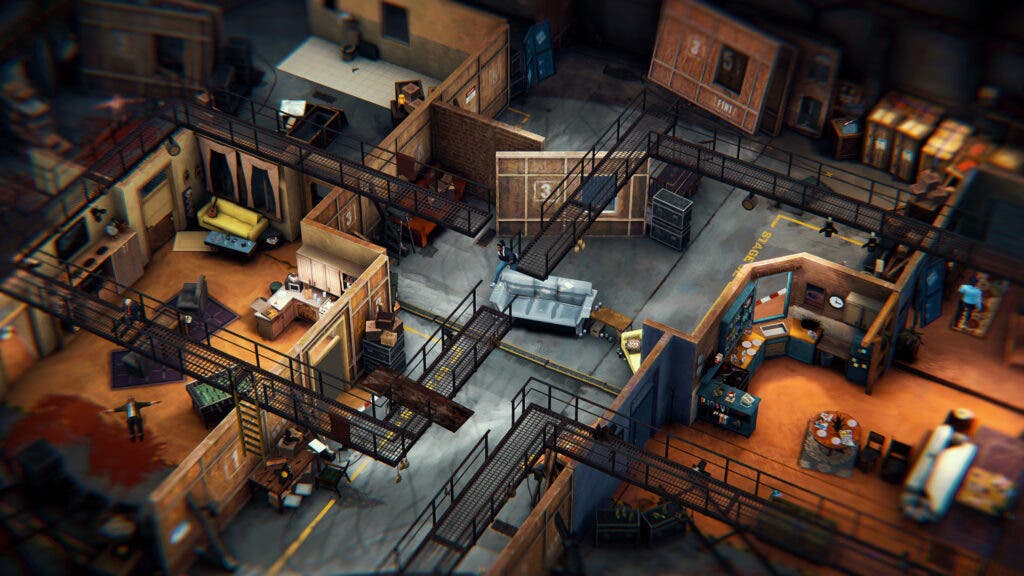 Cleaning up a crime scene will all come down to taking all evidence by discarding all bodies, and removing a set amount of blood while the police ineptly guard an area. All before you can exit. How you clean up the blood is the most interesting aspect of the game, because you do so by vacuuming it up. It’s not a weird or immersion-breaking construct, it just works as a gameplay mechanic. I think a lot of this stems from me playing the prior game, though I don’t think newcomers will blink at its presentation. To aid your cleanup efforts, there’s a cleaner sense that highlights blood on the floor, bodies to be picked up, and evidence to be grabbed. In addition, this “Hitmaid Vision” will tell you about passageways and other objects that would be useful in giving the police the slip while you slink around. Keys will be lazily left in the right spot for you to swipe, and they can be used to lock doors behind you in order to prevent access by roaming cops. And while you can move objects like dumpsters and desks, these barriers can help you as much as hurt you should things go sideways. You’re relegated to sticking to stealth or by breaking line of sight to escape imminent death. There is a new non-lethal option which lets you throw objects to temporarily knockout guards for a more secure getaway. Doing so results in the police presence being on a higher alert unless you let them cool down. I love each character’s unique traits, and the new gameplay mechanics are so fun to engage with, you have so many more options, and far less frustrations this time around.

The scenarios around the levels you clean-up are always impressive. One level has you inciting a prison riot as a distraction to clean-up evidence, and another one is the result of a sitcom shootout. Many times these levels will have outdoor areas where not only the police meant to secure the area, but the public might observe you carrying a dead body and narc on you. Between chapters, there are interstitial sequences that help flesh out each of the characters, as they’re all flawed and fascinating. Sadly, just as you feel you’re starting to get to know them, the credits begin to roll; so I would’ve liked to spend more time with everyone if given the chance.

There’s so much new to the game. Though I think the fact that Serial Cleaners is more verticality-focused is one of the more noticeable elements. You can now climb ladders, take lifts, and utilize multiple paths that really open things up to allow player freedom. As inept as the cops can be around securing a crime scene properly, they will notice when bodies and evidence goes missing. So expect them to be on higher alert and investigate in and around areas where that item was last seen. I think one of my favorite additions is the fact that almost all characters can put corpses into body bags. This takes some time to do, but it’s worth it as there will be no blood trail left behind if you do, making cleaning up even easier.

Draw Distance has also incorporated the ability to save during a run, and as much as you want. These appear as specific save points that serve as checkpoints while you’re in the level. This now removes the requirement of having to play a level perfectly, and get it right all in one go. The save system reduces a lot of the friction the first game caused me, and will be a much needed feature for many, in terms of accessibility and taking a breath. I’ll say that the saves only count for while you’re in-game, return to menu or exit the game and you do have to start over the next time you load it up. Everything feels more than a quality of life improvement, there’s true iteration over the prior game that allows you to experiment and have fun while playing. 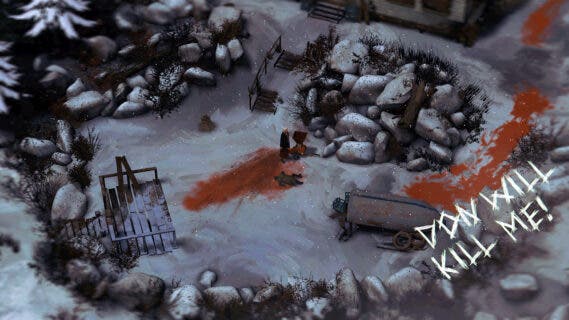 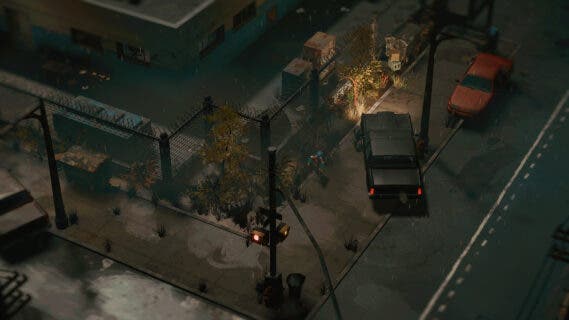 Watching the characters interact is a richer experience during cutscenes. Because instead of one guy essentially talking to himself throughout the whole game, he’s got others to bounce off of. It’s a fully voice acted game, so you really feel like it’s a crew of folks from various backgrounds that came together for one reason or another. The game often features some anachronistic dialogue or abbreviations that weren’t quite there as we approached the year 2000. It doesn’t ruin the game or anything, but I noticed and that was enough of a distraction for what’s happening in the cutscene.

I played the entirety of the game on just a keyboard, as the mouse isn’t bound to anything, so I was able to play the entire game with just one hand. Yes, it did feel weird at times not having both hands occupied, but it’s a totally fine way to go through it. I will say with the game coming to consoles, a controller would fit in nicely here, albeit better. As I think it would have smoothed over some frustrations where I fumbled with the controls in an effort to make a hasty escape after being spotted by the police. However you play it, the game controls incredibly well that can suit all types of players. 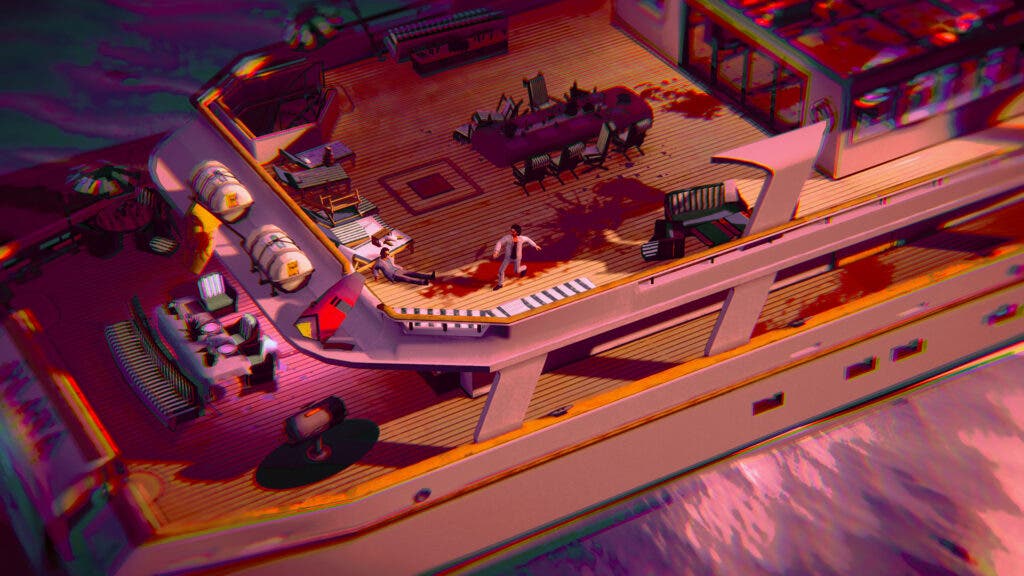 Serial Cleaners will clock-in on average around eight to ten hours for a single playthrough, and for a narrative-led game around stealth, is just the right amount of time. I do wish you could replay levels you’ve beaten, a feature from the first game not present here, but it didn’t hamper my enjoyment. Having the story being told only in flashbacks seemed like a trope at first, but there’s a reason for it that pays off. Serial Cleaners is a stylish game that plays like a reverse Hotline Miami, coupled with a variety of characters with unique gameplay mechanics that keeps things fresh.