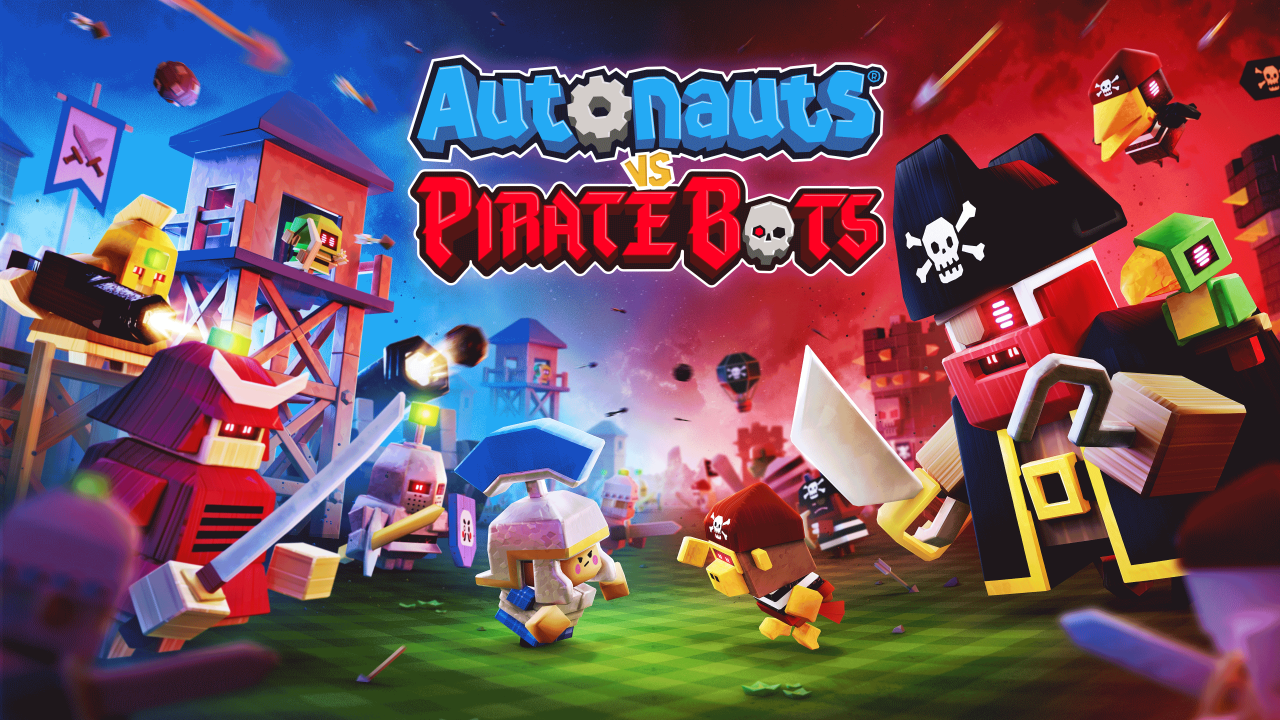 The Autonauts are back in Curve Game’s and Denki’s sequel to the 2019 coding-based, automation, and management-heavy title, Autonauts vs. Piratebots. This time, they are tossing a new mechanic into the mix with the Autonauts being attacked by those pesky Piratebots. Your job, build up the Autonauts to defend against and dispatch the invading Piratebots. 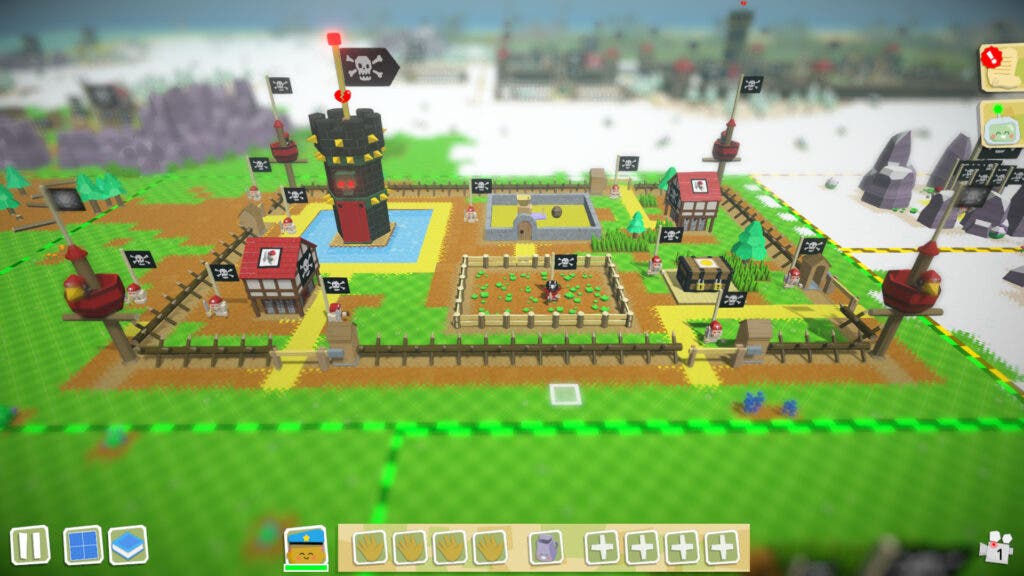 Like in their previous game, you’re tasked with controlling a set of autonaut bots. These bots require visual programing language to have them automate various tasks. Tasks like collecting trees for wood or harvesting crops to sell food. It can get so in-depth that you’ll have bots cut down trees to have other bots carry them and break them down into lumber. Oh, but you can assign another bot to take them and break them down even further. Jobs on top of other jobs on top of different jobs. It can get complicated quickly if you’re not keeping up with things. Ideally, the goal, in the end, is to have a fully self-sufficient automated post where you kick back and let them do all the work. To help you along the way and to give you something to strive towards, you’re given objectives to follow, and upon completion of them, they’ll lead you closer and closer to taking an army to the Piratebots

The world you land on is randomly generated, so you’re bound to have different encounters each time, and the locations of the Piratebots can be relatively close or further away. Regardless you’ll want to scout the area looking for their outposts. You can go alone or take an army with you. I preferred to survey the land and find these locations first, but you do you boo. Once you reach the Piratebots turf, you’ll engage in some combat. Don’t do it on your own; you won’t win. You’ll need some fighters with you. The battle of Autonauts vs. Piratebots is not very complicated, which is a nice counterbalance to the overloaded feeling you could get from all the automating of your bots. To battle, you create your bots and form squads. From here, you give your squads targets to focus on via the bot code menu. Once ready, drop a flag down where the Piratebots are and watch your army go to town. 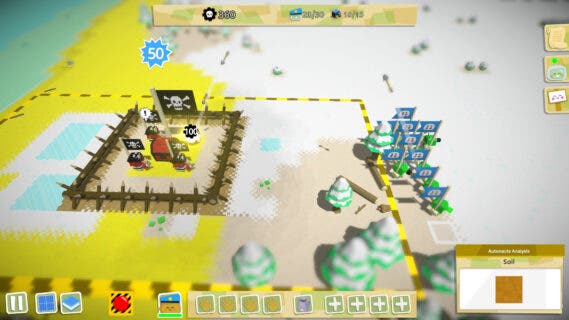 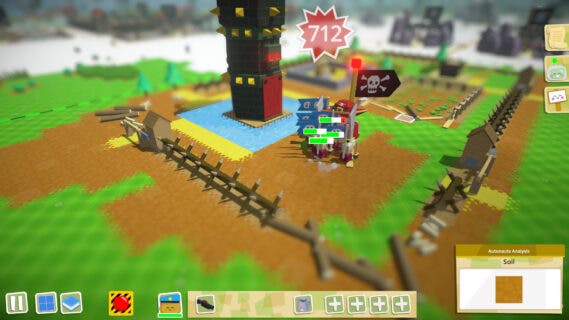 Suppose you haven’t played a resource management and gathering game before. In that case, the basic premise is to generate resources and produce higher-tier resources that will give you the ability to make even better items. Autonauts vs. Piratebots is no different. What is different is the way you go about collecting and creating. As with the previous installment, the robots copy the actions you teach them. Click on the robot, start recording, and any action you do, they will copy. Close the loop, and they will continuously repeat the job till the end of time or when you set it in their programming to stop.

Even though the game gives you an excellent tutorial to get started, I would have liked to have been taught more of the how’s and whys the coding for the robots works. The game uses a visual coding interface which makes the programming aspect far easier for a person like me, who barely dabbled in HTML in my younger days. You get the code in this brick-like presentation that goes in layers and groupings. It makes things easier to grasp when I can see what his following action will be when I want a robot to do this or that, based on the block command I’ve used. But it would have been nice to have the game inform you, in tutorial form, what all the different coding terms like if/then mean in the context of the game.

Visually the game looks great; it’s the same style as its predecessor. It doesn’t have that high res, high poly feel, but is represented in this cute pixel style with bright colors and rounded edges. Everything looks and feels so saccharine and chibi-like. The Autonauts aesthetic, as a whole, invites the feeling of playfulness, and I enjoy being in the little world of automating things. 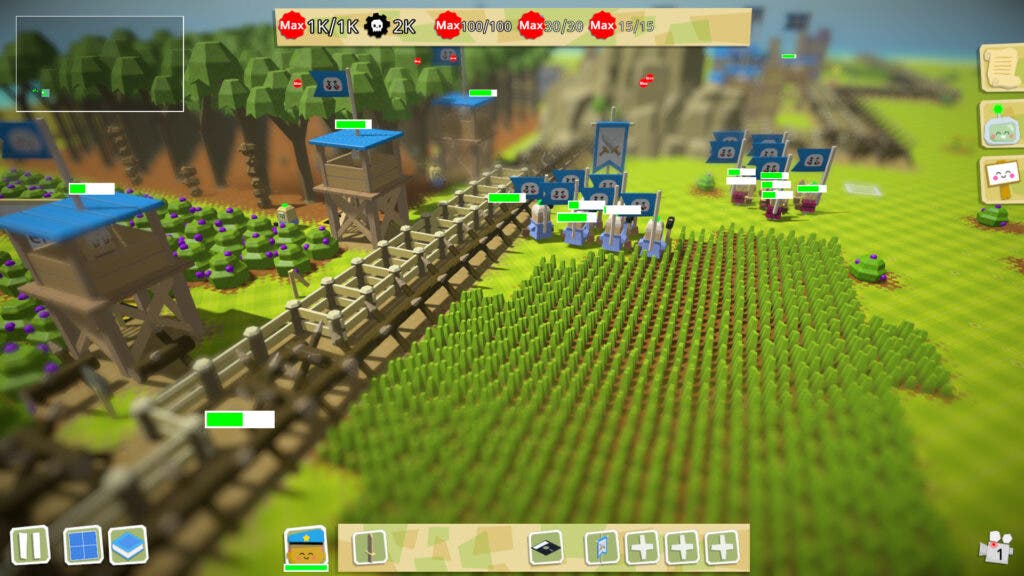 I sincerely enjoyed my time with Autonauts and could see anyone with no programming knowledge to that of a pro programmer having a good time here. With the added combat, that adds a whole new group of people who could potentially enjoy this series now as well! There is a little bit of a learning curve, but it’s fun to learn. Plus, resource management is still a hoot to manage. Building up your little outpost and getting the automation going is as enjoyable as it was in its first installment, and the added battles against the Piratebots are neat. Autonauts vs. Piratebots is a title that will readily eat at your brain when you’re not playing. You’ll sit there and start thinking of everything you could possibly do to make your assembly line more efficient or how to program your bots in ways to maximize output, and I think that’s a sign of a well-made automation game.

A Steam code was provide by the publisher for review purposes