It’s that time of year when we sit down with friends and family, gather around the cozy glow of our TVs, and stare lovingly into the mobile devices glued to our hands with browsers set to jackbox.tv. Yes, the Jackbox Party has returned with the Jackbox Party Pack 9! The game that’s been a banger for parties, hangouts, sleepovers, and streams for years on end drops by to give us even more, party games to enjoy. Do they hit another slam this time around? Yeah, I think they do.

Overall, the package is a lot of great fun. You get a new version of the classic Fibbage to warm everyone up with, to be ready for one of the latest titles compiled into the 9th Party Pack. As with previous reviews, I will individually review each game in this pack. 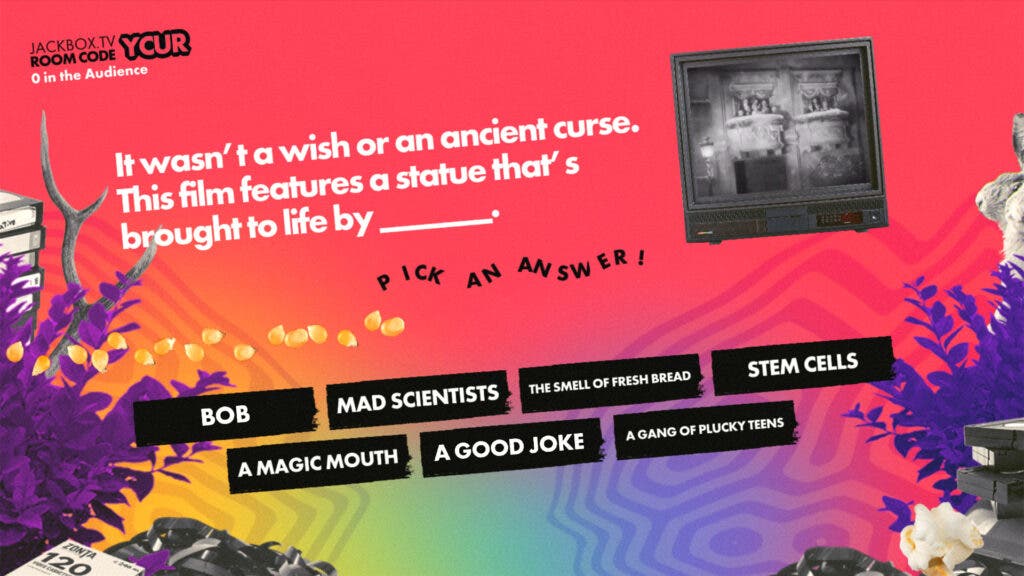 Clearly one of Jackbox’s best, and it returns for a 4th appearance. This time, they include themed episodes, video questions, a new Final Fibbage, and more. Cookie Masterson returns to host, and it’s always a blast to hear his voice in these games. Fibbage plays as you would expect, the game prompts you with a question, and your job is to create a lie so believable that people would pick it. Or you can go the route of making one so funny that people would choose it instead. Tally up the points a the end, and you get a winner. But what about the new stuff? Fibbage Enough About You is a mode where all the questions are about you and your friends, giving you one extra step of customization to make your parties much more fun. They even have new videos utilizing different clips from shows that you’ll have to make up answers for. For example, one of the clips we played had a person walking up to a container, and just as they were about to open it, the clip stopped and asked what was inside the container. From there, it’s Fibbage, and you make up the best answer. Fibbage is always a win-win in these packs and a great addition here.

This is one of my favorites of the new bunch. You’re tasked with sorting answers in the correct order, and the team with the most correct answers wins. Yes, I did say teams; the game splits you into two of them, and you work together to place the blocks in the right spot. This will usually evolve into a shouting match if you get people who disagree on where things should go, and as the opposing team, this is hilarious to witness. The blocks slowly fall, like in Tetris, and you must move them left or right on the screen. A typical question you’ll find is something similar to “youngest to oldest” or “most to least,” so for an example scenario, one of the questions I got was to put boy bands from oldest to newest. The oldest was on the right, with the newest on the left. The first band that popped out was OTown, and that’s a little hard to guess where it would go, not knowing the range of ages the game will spew out, so I dropped that in the middle. Then they gave me BTS, and I didn’t know anything about them except that they are a newer band, so I dropped the block to the right. Eventually, I got bands like Backstreet Boys, New Kids, Menudo, etc., and was able to place those blocks down. You don’t have enough room to lay all the blocks down side by side either, so eventually, you have to stack them, creating this awkward tower if you don’t place the first few down correctly. Sometimes they will throw a fake answer in there, and you have to trash it by moving that block to the edges. It’s quite fun to have a lighthearted argument with your team, trying to decide where these answers should go; plus, Quixort is one of the few games a single player can complete!

In Junktopia, you’ve been turned into a frog. A strange wizard now tasks you with going on a shopping trip to buy unusual items to sell. You have to earn the most money to turn back into a human. How do you sell these items? Well, you have to create a fun backstory for them. Once everyone has shared their object, a vote is tallied for the best one, and every vote your item gets nets you $1000. Not only do you have to win those votes, but you’ll want to try and spend the least amount of money on the item in the first place. You start the round by picking between three items of three different costs. In one game I played, I had the choice of a crinkled pie plate, a golden chicken, or a handcrafted clay mushroom.

The pie plate was the cheapest at $100, but I was given the option to haggle lower, so I did. I chose to haggle, but the prompts asked me to choose either $90 or $80. I went with $80, and the haggle failed. The shopkeep charged me $120. Jerk. But from there, I had to create a name for this mystical item and choose between two given prompts so I could fill out the item’s backstory. You can also do a custom prompt if you feel creative enough. The first prompt was “This item was first crafted in _____” and the second prompt was similar to “this item does this special thing.” So I put together my story and had the game read it out for me. You can also read it yourself if you feel you can be more persuasive. Junktopia stretches the brain’s creative juices, and I like it! It is fun in a party atmosphere, but this is one of those games that requires some deeper setup before players can actually begin, so I would recommend this one as a 2nd or 3rd game to hop into in this pack. 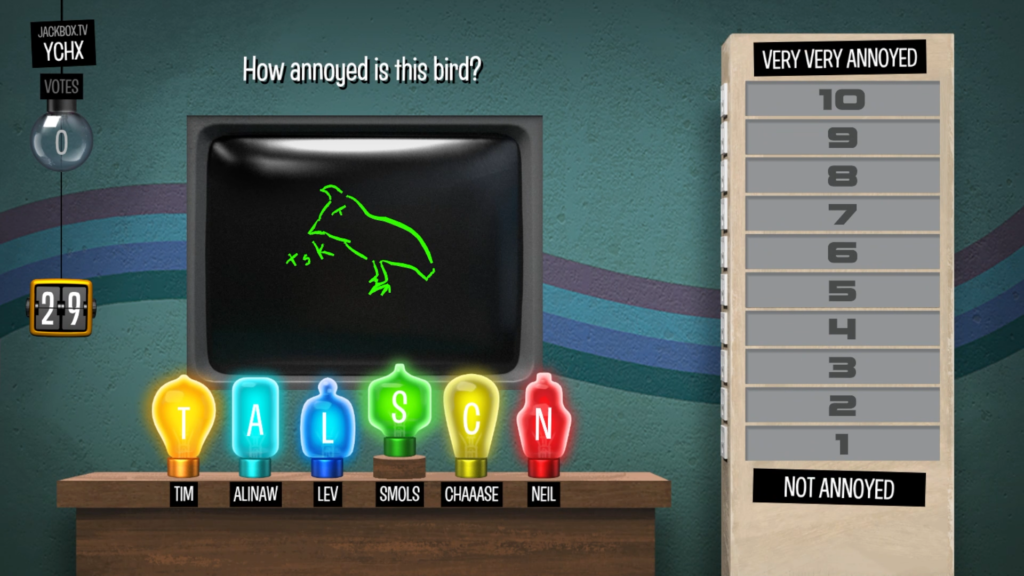 If there was a weak game in this pack, it’s probably Nonsensory. That isn’t to say it’s not fun, but I feel the other games are more substantial, making this one feel weaker by comparison. The object of Nonsensory is two-fold. This is a ranking game, so the prompt the game will give you will be, “I need you to create a name of an animal that is between a duck and a bear.” From here, the game gives you a percentage you must create an answer to as accurately as possible. So in this scenario, it is 30% duck. So I made a name that I felt represented a Duck Bear but leaned more towards Bear, “The Great Northern Brown Bearallard.”

When it’s time to share answers, the other players will have to guess where on the scale your answer was. So, in this case, the other players had to guess as close to 30% as possible. The closer the player’s answer is to the correct one, the more points you earn. As the player who submitted the question, the closer the other players come to the correct answer, the more points you earn as well. So it behooves you to try to make your writing or drawing as close as possible. It’s a fun game that gives off that whole room-laughing charisma Jackbox is so good at. Especially when you get to the drawing portions, and you have to draw an item showing how bad a bird has to poop. It was 90%, and that drawing was hilarious.

The last game in the pack is Roomerang and the one that has the steepest requirements of needing at least four players. Roomerang uses the setting of a reality TV show, and your job is to role-play the character you’ve picked. First, you choose a character design then the game will pick a trait about them. The game will provide all the players with a prompt to answer. You can answer the prompt in character or do something funny. A prompt you might get is something like “If you wrote an autobiography, what would the title be” or sometimes it’ll be about another player. Once all the answers are given, it’s time to vote on the best one. The winner of the votes is safe from elimination, and now everyone has to vote on who will leave the house. Unfortunately for the loser, they have to go, but not before typing a fun goodbye message to everyone. This usually leads to some creative “well, screw you too” moments. But that isn’t the end of their game. They will come back as a “new” character. I put new in quotations because the character is the same, except they now have an accessory like a fake mustache or cat ears. They also have a new name that is the same but with a replaced vowel. It’s funny to see who the new character is; usually, everyone gets a kick out of it. From here, you’re back to the game. During the voting stages, you can even see on your screen who voted to kick you out the last time; you can use that to your advantage. This one is a great title to play with a bunch of people. Everything is there to create chaos in the living room and have some good belly laughs in the process.