You read that right; a coffee brand has created a promotional tie-in game for their product. This isn’t new per see, but we’ll let the press release say a little more:

Austin, Texas – Though the temperatures are cooling, Roasty Buds Coffee is bringing the heat to coffee lovers and gamers alike. In the spirit of other classic brand tie-in games, the world’s spiciest coffee just released a fully featured free arcade game, Roasty Buds: A Recipe… for Trouble! available at play.roastybuds.com.

Play as one of the mighty Roasty Buds, who is on a quest to find his fellow Buds. Together they’ll dodge traps and obstacles to meet at the top of the grinder. Then, they’ll gleefully grind themselves into a smooth, spicy and delicious Roasty Buds Coffee.

Addictive and challenging arcade-style action
Power-ups include Ghost Peppers and Carolina Reapers… just like Roasty Buds Coffee!
Star-style scoring system rewards replays and skill.
Play with your keyboard or touchscreen
Runs in a web browser, so no downloading is required.

“We grew up playing games and loved the idea of a brand tie-in game that was an actual respectable game on its own,” said Louis Montemayor at Roasty Buds. “We’re very pleased with how Roasty Buds: A Recipe for Trouble! came out. We think coffee lovers and gamers with a soft spot for classic arcade games are going to love it.”

Roasty Buds was born with a simple goal in mind: to give people exciting, new coffee experiences. Whether that’s spicy coffee, a wild take on a seasonal classic (Pumpkin Spiciest) or just a flavor nobody has ever seen before. Every bag starts with premium, direct-trade beans from select locations around the world. Then, the hand-crafting gets underway in Austin, Texas.

“We’ve successfully combined two of our favorite things: coffee and hot peppers!,” says Montemayor. “With the success of our Carolina Reaper Pepper and Ghost Pepper blends, we wanted to keep innovating. Our seasonal blend is Pumpkin Spiciest. Much like our new game, Roasty Buds coffee is always blending premium high-quality coffee with flavors that will challenge and excite our customers.”

This is just the beginning for Roasty Buds. Expect more news to follow.

Roasty Buds Coffee began in 2022 in Austin, Texas. The boutique roasting company is dedicated to bring new and exciting tastes to their customers, featuring hot pepper infused beans and beyond. Every bag starts with direct trade beans from select locations around the world. Follow Roasty Buds Coffee on TikTok and Instagram. For more information, visit https://roastybuds.com.

We got Executive Editor and dotEXE podcast host, Ed Acosta, to give the game a quick whirl:

The Developer reached out and mentioned that they’ve impleneted a few fixes to the title. I’ve played the updated version and most noteably the jumping has been tweaked for the better. Where I mentioned before that if you were right up against a box and couldn’t jump over it, it’s been fixed and now your character can clear it. No longer do you have to give yourself jumping room. Also I wasn’t encountering any issues with no response on multple button presses. This was usually when trying to jump and move at the same time with the most common occurence happening when trying to cross conveyor belts. I had times where I would attempt to run and jump to skip it a bit of the belt only to have my character stop dead in their tracks. That no longer applies after this update and I’m able to clear those obstacles without issue. The other change I noticed was D-Pad response on a controller. You’re not able to make and menu choices but once in the game the D-pad will work for left, right, and jump. X functions as your spacebar. I would have liked A to have been jump, but it works.

I did gave this game a little go, and honestly, after playing through the short six stages, it’s not terrible for a web game. I had some issues with it, but let’s get a few of the good things out first. The art style is reminiscent of 90’s arcades with its use of pixel art and animations. The game is presented in a vertical layout as it’s a vertical scroller. The object is to collect barrels that contain spicy coffee beans. Once collected, they appear as a ghostly shadow of yourself and mirror your moves in a delayed time. You can consume one and become “spicy” for a limited time; this effectively makes you invincible. The ghostly versions of you don’t do anything otherwise, and it would have been interesting if they could be interacted with in some way. As I mentioned, it’s a vertical scroller, so you’ll be climbing ladders and jumping to make your way up the level. There are times when you will have to walk off-screen to appear on the opposite side, one level up, and you’ll encounter things like conveyor belts to change your direction. Along the way you’ll collect a couple different kinds of peppers which add to your score at the end. 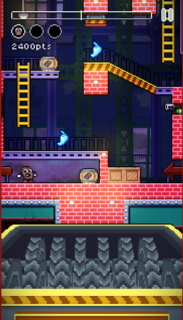 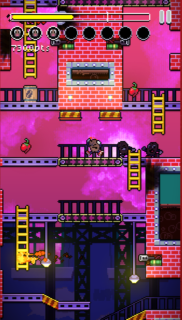 The game is meant to be played on the PC with keyboard controls, but for giggles, I loaded it up on my phone’s browser, and surprisingly it works. You have to swipe and hold in the direction you want to move through, so it’s not the greatest control method. Back to the PC, you use WASD or the arrow keys for movement. The down arrow or S doesn’t seem to have a function, while the up arrow or W jumps. This is where I run into my first gripe, and that’s with the controls. The game has some quirks when it comes to pressing multiple buttons simultaneously, a little bit of an issue when regarding platformers. It’s already not the greatest method to use the up function to jump, but sometimes the delay between your press and the actual jump doesn’t feel great. There were times when I pressed jump coming off a ladder or a box, but the game didn’t respond to my input; sometimes, the character would just stop, and I had to press a direction again. The worst, though, is when jumping over obstacles, particularly boxes. If you butt up against a box and you try to jump over, the game thinks you’re sliding on the side of it, so it won’t let you clear it even though your animation shows you above the box. I would have to take a few steps back and then jump. I did attempt to see if it would respond to a gamepad input (Xbox), but nothing, so it’s keyboard or touch screen. Overall, for a free web game, this harkens back to playing free flash games on sites like Newgrounds, fun for a brief stint to pass a few minutes. If the controls were fixed, I could see this working as a more fleshed out experience. But hey, they offer some free coupon codes in between stages, so maybe give a bag a try? 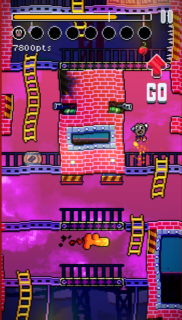 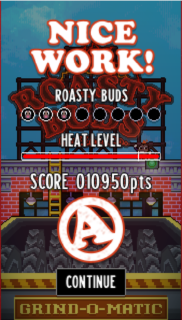