Evil West is the third Flying Wild Hog game this year, and it’s not quite the barn burner I was hoping it’d be. I was reminded a lot about Darkwatch while playing this, not just because of its setting, but that it also felt like a game from a bygone era, for better and worse. Taking place in an alternate history Old West where the occult is as normal as breathing. While this an interest premise, Evil West is a middling third-person shooter with melee combat that doesn’t do enough to make a lasting impression. When you’re in the flow of combat things are good, but those good times don’t last and Evil West is just an ultimately forgettable adventure. 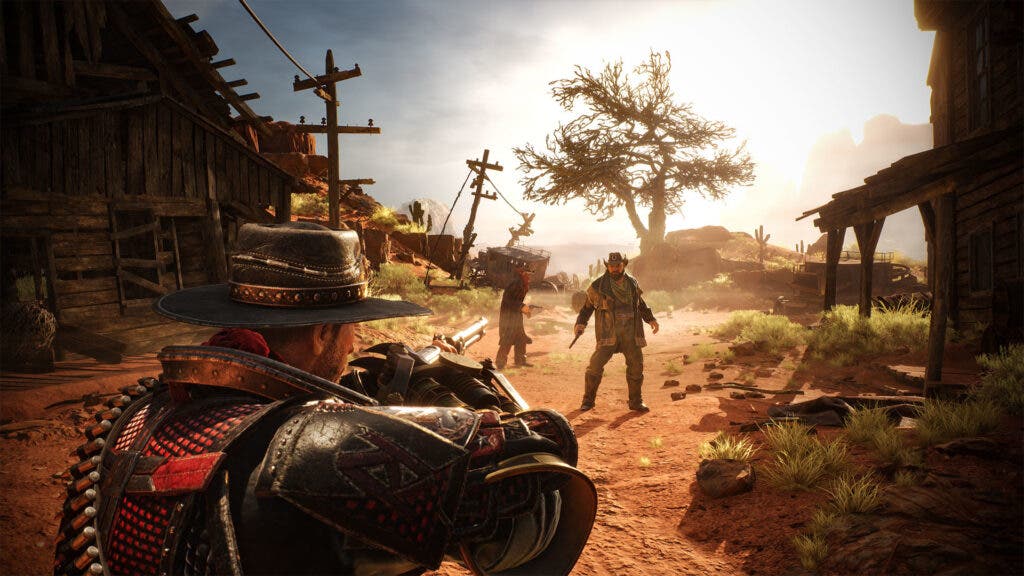 You’ll fill the boots of Jesse Rentier, son of the father who founded the Rentier Institute that’s founded by the government. The institute is devoted to protecting the nation from the supernatural, and researching ways to stop it. Jesse’s father wants him to take over, but Jesse is a hands-on kind of guy that doesn’t want a desk job. After a vampire and his daughter cause a major disturbance, everything is set in motion to put a stop to these horrors once and for all before it spreads. The game follows Jesse chasing leads and going wherever the railway takes you in order to stop these vampires from expanding. The events of the story are predictable, but it still manages to be a ride worth taking.

Between missions, the game will take you to Calico Town, a hub area to do some light exploring and receive most of the exposition the game wants to implore onto you. After a few visits there’s nothing to do at the hub besides moving the story forward. It is however, a nice respite and some solid atmosphere and so intriguing because there’s a base hidden underneath the saloon. And there’s a lot of that here, where the world design is so inviting, you want to know more about it. The base has a respec station, allowing you to reset everything, ensuring that nothing is permanent or stuck with a bad choice you made several hours ago. This is a level-based game, with sixteen in total to take part in, offering a variety of locales. There’s lots of deserts and ghost towns you’ll visits, but there’s also mines, train wrecks, mountains with an aurora borealis, spooky forests, and even oil fields. On the normal difficulty, it takes about ten hours to see the end, and for the credits to roll. This is where a game like Weird West excels, is that you can really soak up and immerse yourself into the world, here you’re shuttled off to the next area every thirty minutes or so. 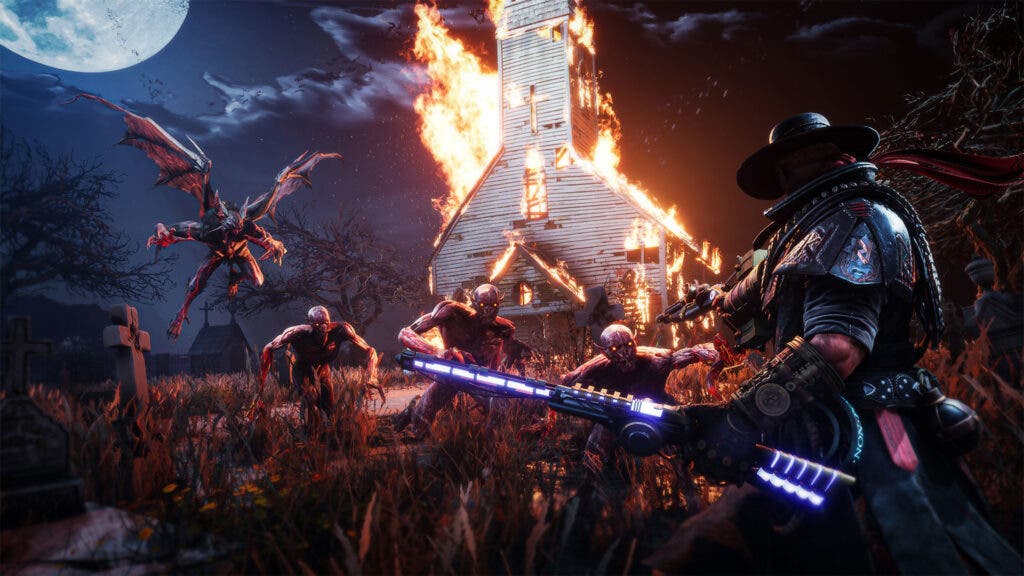 The game is arcadey and old-school in design, which comes with both good and bad. It’s also not a traditional first-person shooter, especially in its controls. For example, there’s no manual reloading or quicktime events. Evil West focuses heavily on melee with the use of the gauntlet, a device that packs a literal punch while also imbued with electricity. Guns are treated as a last resort or a secondary weapon to fight these supernatural creatures. You’ve got a pistol for fanning, a shotgun for pushing back enemies, and a fast-firing crossbow for less damage. Things are good when you’re in the groove of combat, but things are bad when you’re in these exhaustive mini-boss encounters. Flying Wild Hog gives you a lot of tools for use in combat. Though you won’t have access to all of them until well after halfway through the game. Combat while tense, involves lots of dodging and blocking, and it doesn’t always feel the most engaging. The gauntlet is a versatile weapon, allowing for charged attacks, pulling enemies close to you, and an ultimate ability in “supercharged mode”. Once you get access to the crippling rod, a cross also imbued with electricity, is a great opener for every fight as it recharges for another use before the end of it. Most enemies can be put into a state where their bodies glow, and you’re able to perform a finishing move on them like the glory kills in DOOM Eternal. The encounters are for the most part balanced, but when the scales tip in the direction of unfun, then it starts to lose steam. Thankfully these moments are fleeting, and combat is mostly enjoyable, if not repetitive.

I’ve yet to see what the max level is, but according to the skill tree, Level 16 is what the remaining upgrades require and nothing beyond that. Upgrades for your weapons are made by using your hard-earned money from finding chests or even leveling up. You receive perk points for leveling, and everything you do earns you experience. Some perks are locked behind chests that you find during a level, so it does help incentivize exploration. Each level has a certain number of lore items, chests to open, and money to collect – which feels very classic in design. There’s also bonus items like character, gun, gauntlet skins to unlock to change-up your look. If you miss anything, you’re able to replay these levels with ease, but I can’t say I was ever compelled to do so. There’s something to be said for offering a video game devoid of monetization like micro transactions, battle passes, and live service elements you’d expect to see by now. 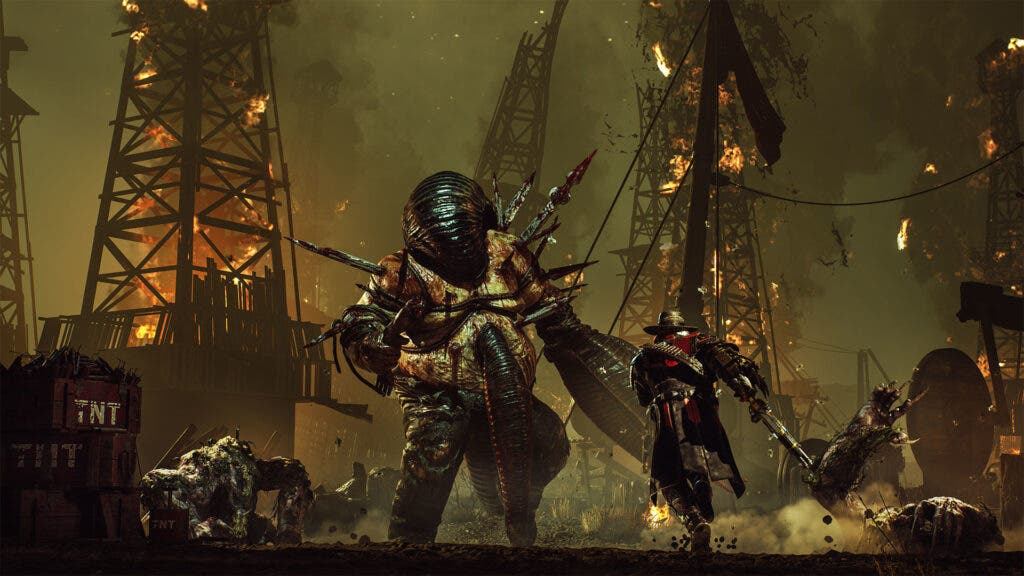 The levels themselves are fairly linear, and off-beaten paths suggest a hidden item, and nothing more. When you come across chains in a level, it indicates some sort of traversal opportunity: swinging, climbing, or pulling objects to solve a small puzzle. Sometimes you have to shoot down a chain, and bizarrely it animated at half the framerate of the game. Aside from jostling when playing an on-rails segment, Evil West was devoid of any major bugs or problems that couldn’t be fixed with a simple reloading of a checkpoint. And even those times were a rare occurrence, so this is a polished game, but pretty barren and straightforward.

Upon seeing ‘Multiplayer’ on the main menu, one might get excited as the prospect. That’s a bit misleading because it really just means Online Co-Op. I didn’t get to play the game with anyone during the review period, but it doesn’t seem to be the most exciting way to play the game – if you’re not the host. Because only host retains progress, the second player has a ephemeral save that only exists for that co-op session. What’s good is that the game will scale things up to accommodate for two players being in the game. Additionally, if one player goes down, it’s possible to revive them. I like the prospect of playing this with another player, as I think it would enhance the experience, but the joining player not being able to retain progress seems like a major misstep. 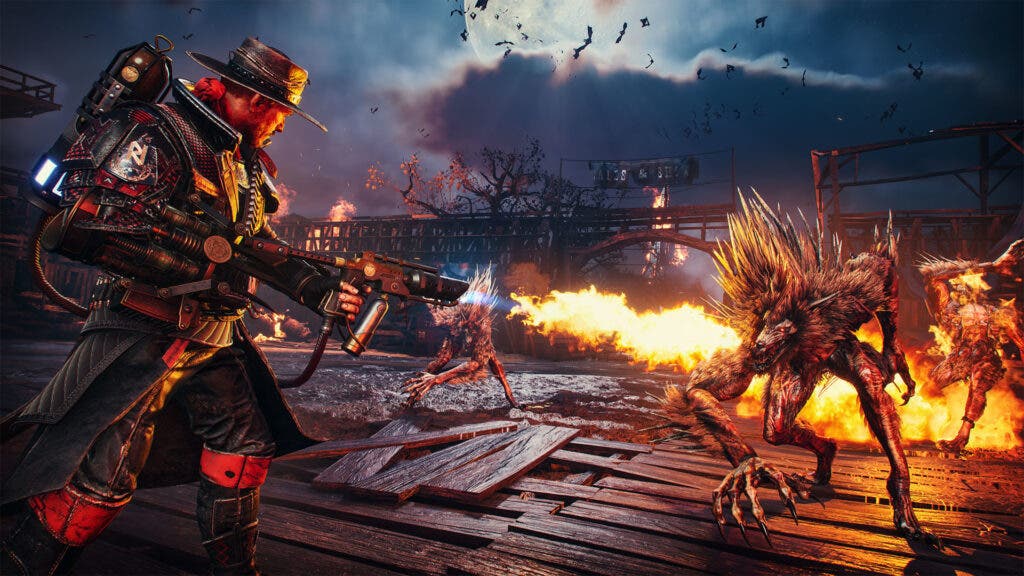 This is an interesting game when it comes to the graphics, which run on Unreal Engine 4. At times it can be very impressive looking, and other times it’s hard to see due to the harsh lighting. In general, anything other than the daytime setting has pretty bad lighting. Oftentimes the game has fires or saturated, colored lighting that makes it hard to see. The dark areas are always too dim, and light areas are always too bright, which is detracting. Despite having every setting at maximum, the game can look a little muddy and last-gen. I enabled AMD CAS for sharpening, and it cleaned up the blurry visuals with ease, with a minor impact to performance. I will say, while the game offers DLSS, I didn’t use it and was able to get 145fps in most cases without it. It seemed to me that as the game went on, it got better looking, but those first few levels set a bad first impression.

Playing Evil West feels like a PlayStation 2 game, in a good way, in that it’s a what-you-see-is-what-you-get kind of game. I do wish the story didn’t feel like I was watching a made-for-TV movie on Syfy, as it was predictable and not giving me a character I actually care about. I was just there for the gore, monsters, and visual effects in all their spectacle. The gauntlet is easily the coolest thing about the combat, so Flying Wild Hog was right to make that the centerpiece. All of the other tools you’re given only enhance the experience, but combat tends to get stale from encounter to encounter as the game goes on. Evil West is a fun vampire-slaying romp while it lasts, and has an honest single-player experience with online co-op that can’t go unappreciated.