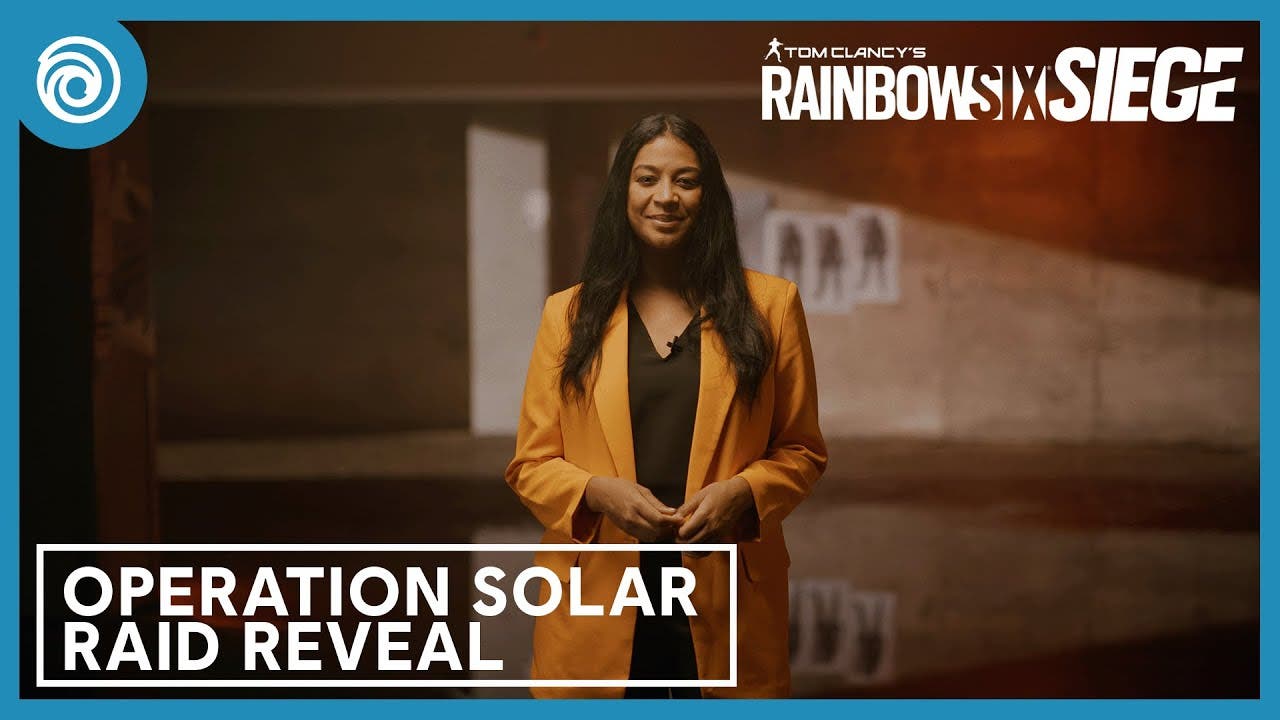 Operation Solar Raid is the name of the final season of Year 7 for Rainbow Six Siege, bringing Crossplay, Cross-Progression, and a New Ranked Playlist

Operation Solar Raid shines light on new Defender Solis and her SPEC-IO Electro-Sensor gadget that gathers crucial intel for coordinated strategy. Solis can clearly analyze and identify Attacker devices including drones, breaching devices, and more. Her gloves also allow her to interact with the gadget overlay and trigger a cluster scan. Solis is a medium speed, medium health Operator, carrying the P90 or an ITA 12L as a primary weapon and an SMG-11 as a secondary weapon.

Solar Raid creates a new experience to the Ranked playlist. Firstly, players’ Rank is no longer decided by their MMR, but by how many Rank Points they win or lose after every Ranked match. Each Rank now has five divisions, and each division requires 100 Rank Points to advance to the next. In addition, a new Rank, Emerald, has been added between Platinum and Diamond.

Secondly, as MMR has been separated from players’ Rank, it will be known as a new value: skill. Skill is a hidden value for all playlists and will carry over from season to season. There will be no more squad MMR restriction, and players can squad up with any of their friends. A new algorithm will adapt matchmaking despite varying skill levels among squad mates. Lastly, Ranked’s reward system has been revamped: players will get one reward for every Rank division achieved throughout the season, and rewards will be granted at the end of each season.

In addition, Year 7 Season 4 brings exciting new updates to Rainbow Six Siege: crossplay and cross-progression. Console players will now be able to squad up with friends from other consoles via Ubisoft Connect. Players who wish to opt out of crossplay can turn off Crossplay Matchmaking in the Options menu. After logging into their Ubisoft Connect accounts, players’ progress, currencies, and items will be shared across all platforms. Additionally, their Ubisoft Connect account will get one free Alpha Pack.

Alongside the new operator Solis, a brand-new map, Nighthaven Labs, arrives at season launch.  Serving as an extension of Nighthaven’s headquarters, the map’s open sea, green cliffs and clear sky invites players to explore its immaculate architecture and technological marvels on display. The interior features many access points, allowing for free navigational flows, especially if players are ready to take down the many breakable walls. Both Attackers and Defenders will have to avoid getting too comfortable as they could easily be flanked and lose their position.  Built for creative strategies, this R&D facility challenges players to take advantage of unusual opportunities like the runout hatch just outside Meeting Room. Nighthaven Labs will not be bannable during Operation Solar Raid to ensure players get to learn and play on the new map during the season.

This season, the Reputation Score Display lets players to access their Reputation Standing. During the beta phase, which is coming in Operation Solar Raid, players won’t receive any positive or negative effects based on that Standing. The objective is to start with a safe onboarding process that gives everyone a chance to adapt and modify their playstyles and interactions accordingly.

The Battle Pass has evolved from its two-tiered system into one with branching paths. Now players can plan their progression and prioritize the rewards they get. No matter which path they take first, they’ll still be able to unlock all the tiles and complete the Battle Pass.

Ubisoft is partnering with Square Enix to create skins inspired from the NieR series for Rainbow Six Siege. An Elite set inspired by 2B from NieR:Automata for Iana and a bundle for Maverick inspired by the Protagonist from NieR Replicant ver.1.22474487139… will be available in the store on November 21.

Highly requested quality of life and balancing updates arrive with the release of Operation Solar Raid. Quality of life updates include the removal of friendly fire in the preparation phase, the ability for Zofia and Capitao to switch ammo types for their device without needing to equip it, a bombsite marker update, and drone speed is no longer slowed down when strafing diagonally while using a controller. Lastly, to rebalance the relationship between Operator speed and health, all Operators now move at the same speed while aiming down sights.

A new accessibility update is also added this season expanding team color customization options to Operator devices and Observation Tools. The color preferences are reflected in the visuals of the devices to help players identify what is owned by a teammate and what belongs to an opponent. When using Observation Tools, the LEDs now match the chosen team colors, letting players recognize if it’s being used by a teammate or an opponent.