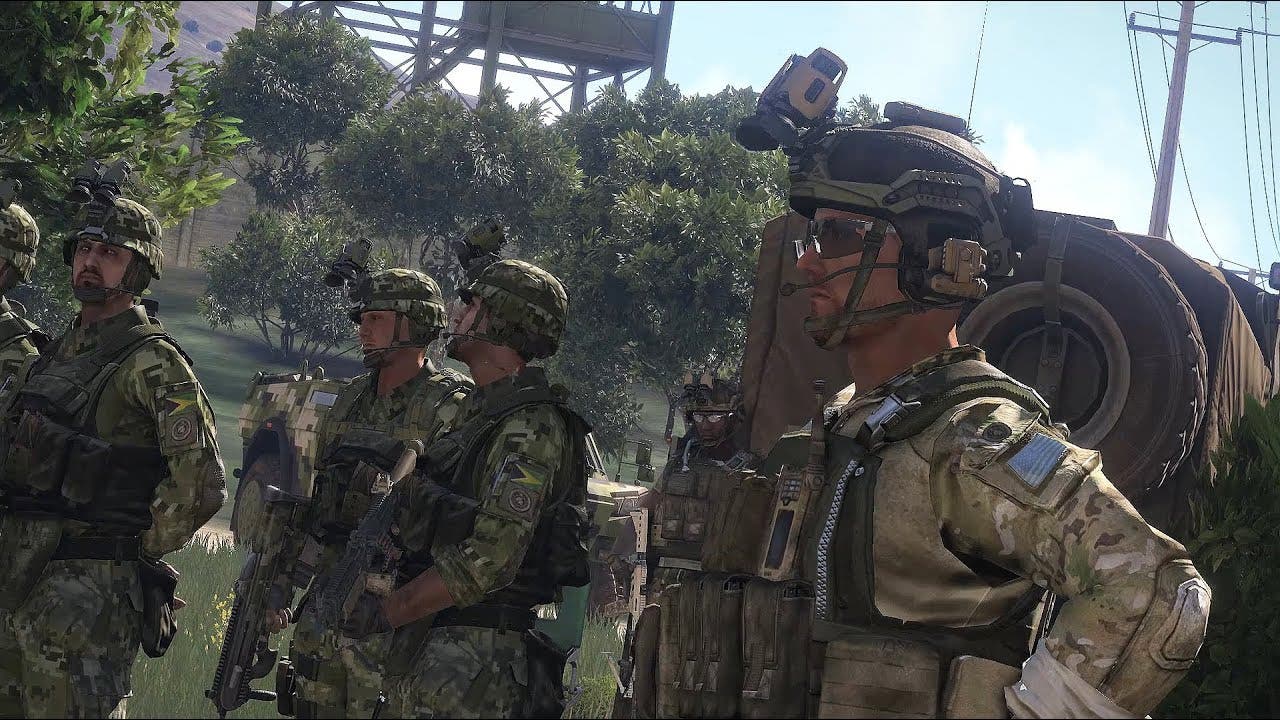 Arma 3 goes to Bootcamp, to teach you the basics in a VR space

Bohemia Interactive, creators of the critically acclaimed Arma series and the standalone version of DAYZ, today announce the €500,000 Make Arma Not War content creation contest for Arma 3. With cash prizes ranging from €20,000 to €200,000, spread across four different categories, Bohemia Interactive challenges people to deliver their best work yet – and potentially move onto the radar of hundreds of thousands of Arma 3 players.

Using the game as their platform, people can compete in four different categories: Total Modification, Singleplayer Game Mode, Multiplayer Game Mode, and Addon. The headline prize will be awarded to the winner of the Total Modification category, where the sole victor will be taking home €200,000. In the other categories, prize money is divided between 1st place (€50,000), 2nd place (€30,000), and 3rd place (€20,000). Projects which show a lot of potential might also be offered a contract by Bohemia Interactive, whether they have won the contest or not.

“We’re delighted to be running a contest of such an incredible scope. The Make Arma Not War contest was brought to life to support our dedicated community of content creators, and stimulate the exciting culture of creativity that has formed over the years”, said Ivan Buchta, Creative Director at Bohemia Interactive, and one of the contest organizers. “Of course, with the stakes being this high, we’re expecting people to raise the bar – and we hope Arma 3 players will be there with us, to boost morale, and enjoy the fruits of the contestants’ hard labor.”

In addition to the €500,000 in cash prizes, Bohemia Interactive is also proud to announce a unique collaboration with the International Committee of the Red Cross (ICRC), who will be handing out the Health Care in Danger Special Award. Given to the entry which covers the topic of ‘health care in danger’ the best, the winner(s) will go on a one-week trip to an ICRC mission in a foreign country, organized by the ICRC.

While the application period is scheduled to open in 2014, people are already welcome to start working on their project. The closing date for submissions is October 28, 2014, after which a jury of Bohemia Interactive representatives and other industry professionals will begin to evaluate the finalists in each category (10 in the Total Modification/Multiplayer Game Mode/Addon categories, 20 in the Singleplayer Game Mode category). The winners will be announced on January 15, 2015. More details, including how people can cast their vote and support their favorite projects, are to be announced at a later date.

“With the launch of the first Arma game in 2001, we’ve laid the foundation for our series’ long-standing history in user-content and modifications. It has led us to enjoy many amazing creations, among which is the popular DAYZ mod”, said Bohemia Interactive’s CEO Marek Spanel. “Support for mod-making has always been a priority, and with Arma 3, our goal is to take it to the next level. The Make Arma Not War contest, as well as Arma 3’s integration of the Steam Workshop, the updated EULAs, and our refreshed Arma 3 tool suite, is all part of this effort. We can’t wait to see what comes from it!”

The rules for the contest, which also includes information on dates, prizes, and categories, can be found on www.makearmanotwar.com. The Make Arma Not War website will be updated regularly, starting with additional instructions on how to apply in the beginning of next year.

The first campaign episode for Arma 3 arrives, asking you to Survive

To reinforce the launch of the Survive campaign episode, Bohemia Interactive has released a brand new trailer for Arma 3. The first campaign episode – which introduces the conflict between the NATO, CSAT, and AAF factions – is now available as an automatic update on Steam. In Arma 3’s campaign, players take on the role of Ben Kerry, a soldier who is a part of the NATO peacekeeping operation in the Mediterranean. Five years after the bloody civil war in the Republic of Altis & Stratis came to an end, NATO has started to withdraw its forces from the region – unknowingly creating the conditions for a Mediterranean flashpoint. Kerry’s unit, ‘Task Force Aegis’ – together with a clandestine group of UKSF operators – is soon caught up in a situation beyond their control, and trapped in a fight for survival. Besides new playable content, the first campaign episode also provides extra building blocks for Arma 3 content creators. These come in the form of new weapons, animations, 3D objects, and scripted modules. More free content, including new vehicles, is expected to be released together with the next campaign episodes. The exact release dates of the second (Adapt) and third (Win) campaign episodes will be announced later. Arma 3 features the large open terrains of ‘Altis’ (270 km²) and ‘Stratis’ (20 km²), 12 singleplayer showcases, 3 factions showcases, 9 multiplayer scenarios, 10 firing drill challenges, more than 20 vehicles and 40 weapons, 5 factions, the scenario editor and modding support. The singleplayer campaign is deployed across 3 campaign episodes.

Exclusive Campaign: Terrorists seized a key dam and threaten to destroy it unless their demands are met. It’s up to you to infiltrate the area and make sure the dam remains safe. Enter the new thrilling campaign featuring additional stages, enhanced visuals and new game mechanics such as silenced weapons and mortar fire.

Arma Tactics is a turn-based close-combat strategy game, where the player takes control of a four-member Special Forces team. There are no given strategies, rails to move on, or paths to follow; it‘s up to the player to decide how he will play through both the story-driven missions and generated missions with randomized objectives. Whether using stealth or a more direct approach, players will need to use their strategic thinking and use both basic and advanced weaponry while facing many different opponents – ranging from unorganized local militia to smart and skilled mercenaries.

With highly re-playable missions, weapons to unlock and whole campaigns to be regularly added, Arma Tactics offers many hours of intense ever-changing action.

Set on the Mediterranean islands of Altis (270 km²) and Stratis (20 km²), Arma 3 features 12 singleplayer showcases, 3 factions showcases, 9 multiplayer scenarios, 10 firing drill challenges, more than 20 vehicles and 40 weapons, 5 factions, the scenario editor and modding support. The post-launch campaign will be made available via  3 free DLC episodes after release. The complete overview of content can be found  here.

“We’re incredibly proud of the release of Arma 3, as well as of the unique collaboration with the people who joined for the early-access development. We experienced some significant setbacks in the past years, but the fantastic public response to the Alpha and Beta kept us going,” said Joris-Jan van ‘t Land, Project Lead on Arma 3.

“Together we’ve made a game that truly meets its potential – while establishing a platform to build upon and grow even further. Our long-term commitment to Arma 3, in combination with the creative modding community and Steam Workshop, means this is just the kick off. We thank everyone for their splendid support and welcome you all to join our journey ahead.”

Before the official launch of Arma 3 on September 12, Bohemia Interactive has published afinal update for the Arma 3 Beta. The absolute highlight of this update is the integration ofSteam Workshop – which makes the sharing of user-created scenarios significantly more convenient.

Now, with Steam Workshop content sharing, players can upload and download both singleplayer and multiplayer scenarios. Arma 3’s in-game scenario editor is a powerful tool, allowing for the quick creation of missions, as well as more complex scenarios. Enhanced gameplay modules make life easier for aspiring designers to get started without having to learn the scripting language.

Having created a scenario, players can easily push it to the Workshop with a description and overview image. Other players can browse the Workshop for a scenario that looks appealing to them and subscribe to it. This will download the scenario and let players start it without restarting the game. Interacting with the author is made easy: players can leave comments, give a rating and updates are automatically downloaded. Authors themselves can post update notes and promote their scenarios with screenshots and videos.

Designer and Workshop caretaker, Jiří Zlatohlávek, expands:
“Even though we are dedicated to support the traditional ways of sharing content, used by many of the popular community portals – in the fast and easy to use world of app stores, streaming services and real-time feeds, we felt that sharing user content could be improved. What we see in the Workshop is a faster and easier way both for the creators to get their work out there to players and for the players to find and try it while providing feedback and encouragement, where it’s needed the most.”

The last update for the Arma 3 Beta also includes a long list of other improvements and fixes (overview here), and will be downloaded automatically via Steam.

Bohemia Interactive have released a statement regarding their recent intrusion:

We have unfortunately discovered that an illegal attempt has been made to access certain of our online websites, leading to the download of a database containing usernames, email addresses and encrypted passwords. Please note due to the encryption of the passwords it is very unlikely that anything nefarious can be done with this information.

We would like to reassure everyone that no other information such as credit card details is stored by us and thus was not at any risk from this illegal breach.

As a precaution we are resetting the passwords of all users which means you will be unable to log into any of our websites/forums until your password is changed. To do this, go to

https://profile.bistudio.com/profile/recover-password , enter your email address or username and press “Get a new password”. Shortly afterwards you will receive an automated email fromsupport@bistudio.com with a link, where you can set a new password of your choosing.

In the event that you do not receive the email within 20 minutes, please try searching your spam folder.

If you have any problems with your account, or have any questions/concerns regarding this incident please feel free to contact support@bistudio.com

Thank you for your attention,
Bohemia Interactive a.s.

If you’ve read/heard about the employees working on ArmA III who were “spying” on a military base in Greece, I just received a letter from the CEO of Bohemia Interactive. This is what he has to say on the issue:

We can confirm that two Bohemia Interactive employees, our colleagues and friends, were arrested during their holiday trip to Lemnos. They visited the island with the sole purpose of experiencing the island’s beautiful surroundings.

Since its establishment in 1999, Bohemia Interactive has created games based only upon publicly available information. We always respect the law and we’ve never instructed anybody to violate the laws of any country. The same is true for Arma 3.

Currently, all our effort goes towards supporting the guys over there, as well as their friends and families affected by this difficult situation. We sincerely hope that this is an unfortunate misunderstanding of their passion as artists and creators of virtual worlds.

On behalf of the Bohemia Interactive team,