Paradox Interactive, a publisher of games you must be this tall to play, today announced a new “Free Admission Edition” of Dungeonland, the co-op action game where eager heroes are lured into a theme park to their horrible and hilarious deaths. Available today, the Free Admission Edition will allow naïve players everywhere to experience a sample of Dungeonland’s cruelty and die to their hearts’ content in the park’s free areas with up to three players – plus a fourth player as the park’s devious and handsome Dungeon Maestro. The visitors to the amusement park will as of today also be able to earn Steam Trading Cards, to send home to grievi… uh, grateful family members.

Dungeonland continues the Adventures through Paid and Free DLC

Paradox Interactive, a publisher of games and a purchaser of souvenir photos, today released details on the evolution thus far of Dungeonland, the mostly-co-op action title from Critical Studio. Dungeonland, which has received a long list of gameplay tweaks and bizarre adventurer costumes since launch, continues to create DM tricks, silly costumes to force upon players’ hapless avatars, and a horde of behind-the-scenes tweaks on a regular basis. These alterations continue to lure unwary heroes inside the park where they will have so much fun that they won’t realize their best skills have been nerfed until it’s too late.

Dungeonland is a cooperative action game that sends three players to a theme park just for heroic adventurers, surviving relentless hordes of friendly staff and stealing loot from all of the gift shops. Since the game’s launch in early 2013, Dungeonland has been carefully altered and expanded by the Dungeon Maestro and his minions at Critical Studio.

“New language options, cheaper perks, Mimics who won’t bite you more than once each – it’s really amazing how much work goes into keeping my theme park open every day,” said the Dungeon Maestro, director of corporate defenestrations at Paradox Interactive. “I’ve even cut down on some of the grinding, so heroes can have their precious little abilities unlocked sooner. The actual grinder where I put their bodies, though, that part’s still there. I mean, can you imagine? Like I have room for all those corpses in here.”

DLC bundles for all characters 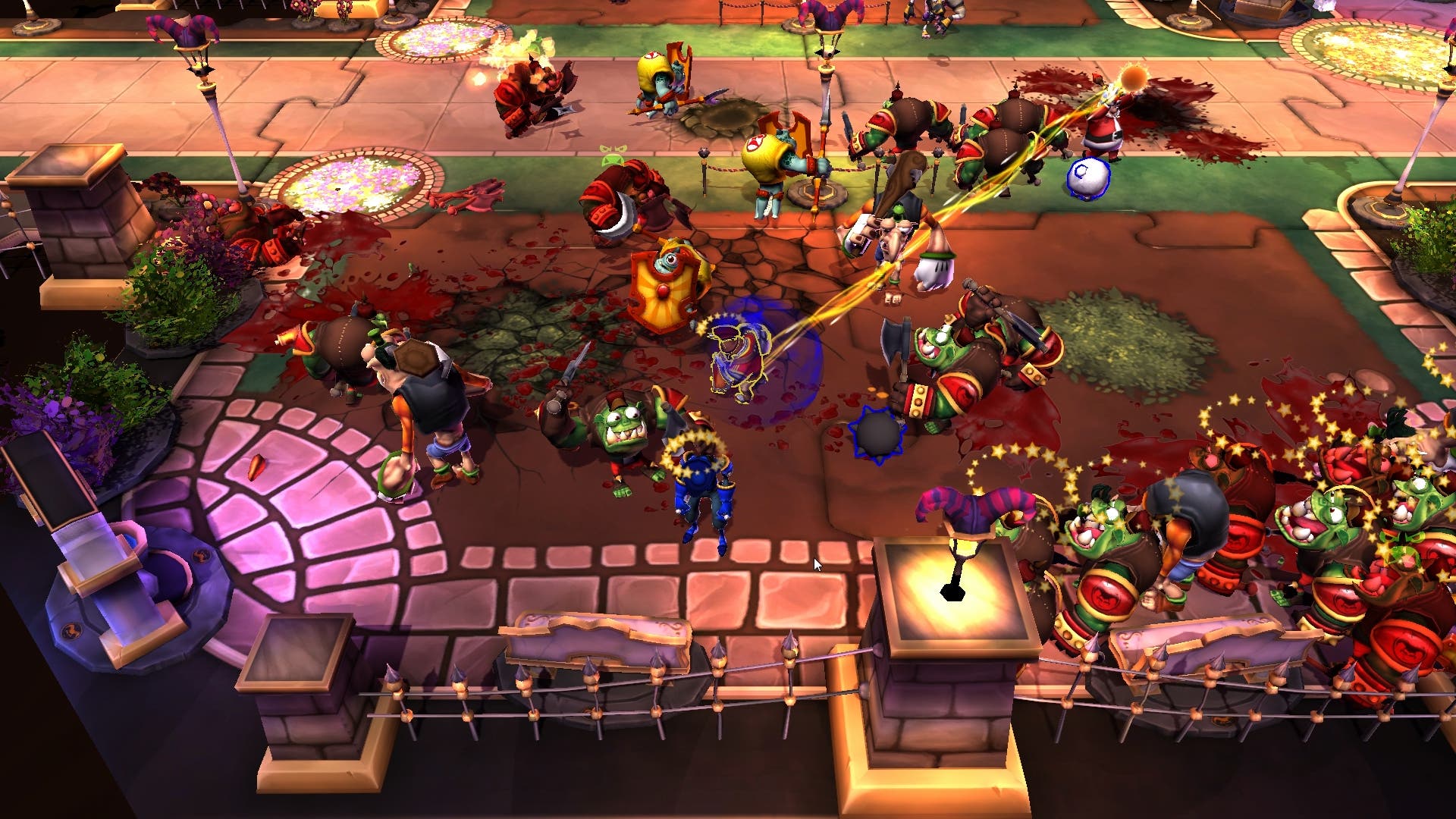 Dungeonland is an action RPG dungeon crawler that plays out in the isometric angle; think Diablo, Marvel Ultimate Alliance, Skylanders. There are three themed levels to choose from that doesn’t make much of a difference play-wise but gives a different aesthetic to the environment. Also included is a special Dungeon Maestro mode that was very fun, dare I say some of the most fun I’ve had in a PC multiplayer game in a while.

Dungeonland is Now Open for Business (Now Available for Purchase)

Paradox Interactive, a publisher of games and consumer of funnel cake, and Critical Studio, the lamented minions of Dungeon Maestro, today announced that Dungeonland has opened its doors to easily lured heroes everywhere. Available today for PC via digital distributors worldwide, Dungeonland can be purchased, downloaded, played, and quickly lost over and over again by soft, fleshy adventurers to their heart’s content. Dungeonlandcosts merely $9.99 plus the lives of your co-op partners.

“I can’t tell you how pleased I am to finally welcome the world to Dungeonland,” said the Dungeon Maestro, Director of Scheming at Paradox Interactive. “This represents a bold step forward not just for my glorious plans, but for the evil industry as a whole. Opening day is just the beginning, as well; today PC heroes can ‘enjoy’ their visits, but soon I’ll be able to lure MacOS heroes to my park as well! Better still, there’s a whole new section we’re going to open shortly, called Infinite Dungeon! We tell the heroes it’s the best challenge we have, where the fights just get harder and harder until they die – and the idiots line right up to try it!

“They always die, and they go in anyway!” added the Maestro. “Ha! Ha ha ha! HAHAHAHAHA!”

Dungeonland is the creation of the cunning Dungeon Maestro, who has invited the world’s pesky heroes to an adventurer’s theme park of his own design. Inside the colorful park, up to three players can play cooperatively to slaughter the monstrous staff and collect glittering piles of loot in fast-paced action gameplay. Meanwhile, a fourth player can take on the role of the Maestro himself, controlling the park’s traps and creatures, attempting to kill the other players, and mashing the “evil laugh” button as often as they can. A new trailer for Dungeonland is available today to demonstrate the virtues of teamwork, and the much better virtues of hero-slaughter.

Today, Paradox Interactive announced that the upcoming hack ‘n’ slash title, Dungeonland, will have its launch postponed by one week. Originally slated for release on January 22, the irreverent co-op game will be available on leading distribution channels come January 29. It’s not a huge push back, but enough for anyone with a pre-order or waiting for its release.

As we continue our quest to ensure game experiences on day one are as pleasant as possible, we’re making a few last minute updates before releasing the game to the masses. We work around the clock for our devoted community, and we appreciate everyone’s patience here as we get things finalized.