Madden NFL 25 “Live It” trailer for Xbox One and PS4

As the launch of Madden NFL 25 on next-gen consoles nears, today EA SPORTS released details on how the game will bring the excitement and emotion of Sunday into the game.

Madden NFL 25 breathes new life into stadiums, as players, crowds and announcers react intelligently and dynamically to the in-game action. Players demonstrate more awareness and emotion than ever before. For instance, when a ball-carrier runs out of bounds after a big play, his teammates standing on the sidelines will encourage him, while in a similar situation, players on the opposing sideline will scatter. Fans also react to big moments in the game. For example, the crowd will stand in anticipation during a long pass downfield or erupt after a game-changing touchdown. Commentary adds additional layers of realism as Jim Nantz and Phil Simms reference past performances, demonstrating awareness of what’s happening in your Madden NFL universe. 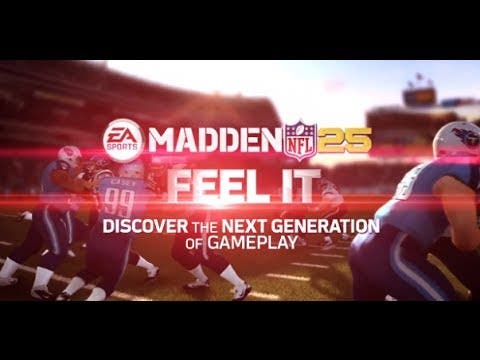 Madden NFL 25 – Gameplay trailer for Xbox One and PS4

The Madden NFL 25 next-generation gameplay conversation begins today with the debut of the all-new “Feel It” trailer. EA SPORTS will be rolling out full gameplay details on Madden NFL 25 website andFacebook page that highlight how the game reaches new heights on next-gen consoles.

New features introduced in Madden NFL 25 include Player Sense, which enables players to scan the field, anticipate situations before they happen and maneuver based on instinct for the first time ever. Players make up to 50 times the contextual decisions they ever have before, bringing a new level of intelligence to every player on the field. In addition, the implementation of True Step player motion provides unprecedented ball-carrier control, as well as the most organic, user-driven outcomes in franchise history.

Furthermore, the War in the Trenches fundamentally changes the dynamic of the offensive and defensive line. Linemen are able to make four times as many decisions per second, and 300 new blocking animations will lead to never-before-seen situations and outcomes. Offensive linemen intelligently identify the “Mike” linebacker, and shift and sort assignments at the snap in order to target the biggest defensive threats. While the offensive line brings a new arsenal of double-team blocks and blitz pick-ups the defense has gotten smarter too, utilizing bluffs, stunts and angles to find the weak point in the line, split double-team blocks or confuse the protection long enough to get into the backfield. Every down is a new battle to control the line of scrimmage.

Electronic Arts announced today that the all-new HD version of NFL Blitz from EA SPORTS is now available via digital download on Xbox LIVE Arcade for 1200 points and PLAYSTATION Network for $14.99. A remarkable value, NFL Blitz features the arcade-style gameplay that made the original game a hit, but takes the experience to a whole new level with immersive online* game modes in high-definition.

World of Warcraft is turning seven on Wednesday, November 23.  To celebrate this anniversary with the community, all players who log in between Sunday, November 20 and Saturday, December 3 will receive a Feat of Strength and a celebration package item. When used, the package shoots off fireworks and temporarily grants both a special tabard and a 7% experience point and reputation bonus.

This Sunday, November 20, an all-new World of Warcraft television commercial will debut on CBS during the Chargers-Bears NFL game (kickoff time: 1:15 p.m. PST/4:15 p.m. EST). The ad is set to air sometime during the first half… and when the star of this spot asks, “what’s your game?” you’d best have an answer ready.

From the football field to the battlefield, the Battlefield 3™ experience comes alive this fall! Electronic Arts Inc. (NASDAQ: ERTS) today announced that it has teamed up with some of football’s biggest stars for an exclusive reality show titled GTTV Presents Battlefield 3: Operation Gridiron. Airing on Spike TV this fall, the show takes quarterback Drew Brees, linebacker Clay Matthews, wide receiver Larry Fitzgerald, and defensive end Jared Allen into real-life combat scenarios inspired by the award–winning videogame, Battlefield 3. Filmed at a top secret location, these all-star athletes are provided the ultimate in combat training by some of the world’s most elite Special Operations Warriors. Following their advanced training, they must work together as a team to accomplish a live simulated operation, pulled straight from the gritty war scenarios players will face in the game. Starting today, weekly Tuesday webisodes will be posted at 9:00am PDT on the Battlefield Facebook page. The finale will air on Spike TV on October 24 at 12:00am EST/PDT and at 11:00pm CST. Gamers can “LIKE” Battlefield 3 on www.facebook.com/battlefield to view the Battlefield 3: Operation Gridiron webseries.

“Taking to the battlefield in these real life war settings was really exciting and eye-opening,” said All-Pro quarterback Drew Brees. “Every day men and women face challenges similar to what we tackled in this show but with potential dire consequences. Filming this show once again reinforced my respect for the soldiers who fight every day for our freedom.”

Battlefield 3, developed by DICE in Stockholm Sweden, is one of the most anticipated games of 2011, having already earned more than 50 awards including ‘Best Action Game’ and ‘Best Online Multiplayer Game.’ Critics praise the game for its intense gameplay experience, powered by the Frostbite™ 2 state-of-the-art game engine that delivers superior performance in character animation, visual rendering, audio and physical destruction. To accompany the game, Orion Publishing will release a novel called Battlefield 3: The Russian written by the highly decorated ex-SAS operator and best-selling author of Bravo Two Zero, Andy McNab, with co-author Peter Grimsdale. McNab is working with the creative team at DICE to ensure the authenticity and grittiness of today’s warfare is experienced in the single player, co-op and multiplayer campaigns. Battlefield 3 will be available October 25, 2011 in North America for the PlayStation®3 computer entertainment system, the Xbox 360® videogame entertainment system and the PC.

Electronic Arts has confirmed the date of Madden 12.  It will release on August 30th, 2011 – with or without an accompanying football season.

Also, you can still vote for the Madden 12 Cover Athlete: