The Xbox One doesn’t have many titles to it’s name, but it is growing. Think of Plants vs Zombies: Garden Warfare as a pretty dandelion. It’s just another plant poking it’s head out of the ground; a weed among flowers. To a young mind though, a dandelion is pretty flower; one worthy to give your love. Plants vs Zombies: Garden Warfare can be thought of as just another team based shooter on a console that has a history of hosting shooters. Plants vs Zombies stands out with it’s bright colorful aesthetic and cartoon-y design among all the greys and browns of other shooters, plus it’s fun to play, so there’s that.

Update 9/1/2014: We have updated our review to reflect the PS4 release

The characters are there from the hit game, on the plant’s side you get the well rounded peashooter who, well, shoots peas. The sunflower is your healer and can hit you with a life regenerating beam in dire times, the chomper is all melee and has an attack that can burrow underground and attack enemies unseen. Finally there’s the cactus who can snipe enemies and set up mines around the battlefield. Other plant characters you may be familiar with will appear as power-ups and assists throughout the game. The zombies have characters that are easier to associate their class: soldier, scientist, engineer, and the all-star. With the powers of deduction, you’ve probably figured out that the all-star is the melee character on the zombie side. PopCap’s done a good job keeping the balance between the two sides where there is no clear advantage to one team or the other. For example, as unstoppable as the chomper’s burrow attack seems, the zombie engineer has a sonic grenade that will stun all plants and force chompers out of the ground.

There are two general modes in this 3rd person shooter, a team based player vs player mode with a variety of game types and a wave based survival mode where you play as the plants. If you’ve played popular team games like Team Fortress then you’ll already know what to expect in the team based mode. Use your team and work together to defeat more of the other team. The wave based survival mode is called Garden Ops and it plays like any other wave based survival game. You can play the mode online, by yourself, or with a buddy on the couch. Unfortunately you can not take your friend online nor will they earn any of their own achievements. I don’t know if this is a system level thing on the Xbox One but that’s just a poor thing to do to someone.

The easiest comparison to make about Garden Ops would be another EA title, Mass Effect 3, more specifically it’s Multiplayer. Both use a similar unlock system for characters, Mass Effect had the packs of equipment or characters you could buy with earned currency or with your credit card. In Plants vs Zombies: Garden Warfare there are surprisingly no micro-transactions to be seen, you earn credits while playing to unlock sticker packs that refill consumable power-ups and assists, outfits for your characters, and special variations on the different characters. It’s a system that works well but doesn’t feel too “grindy” since the game is fun to play and come back to. 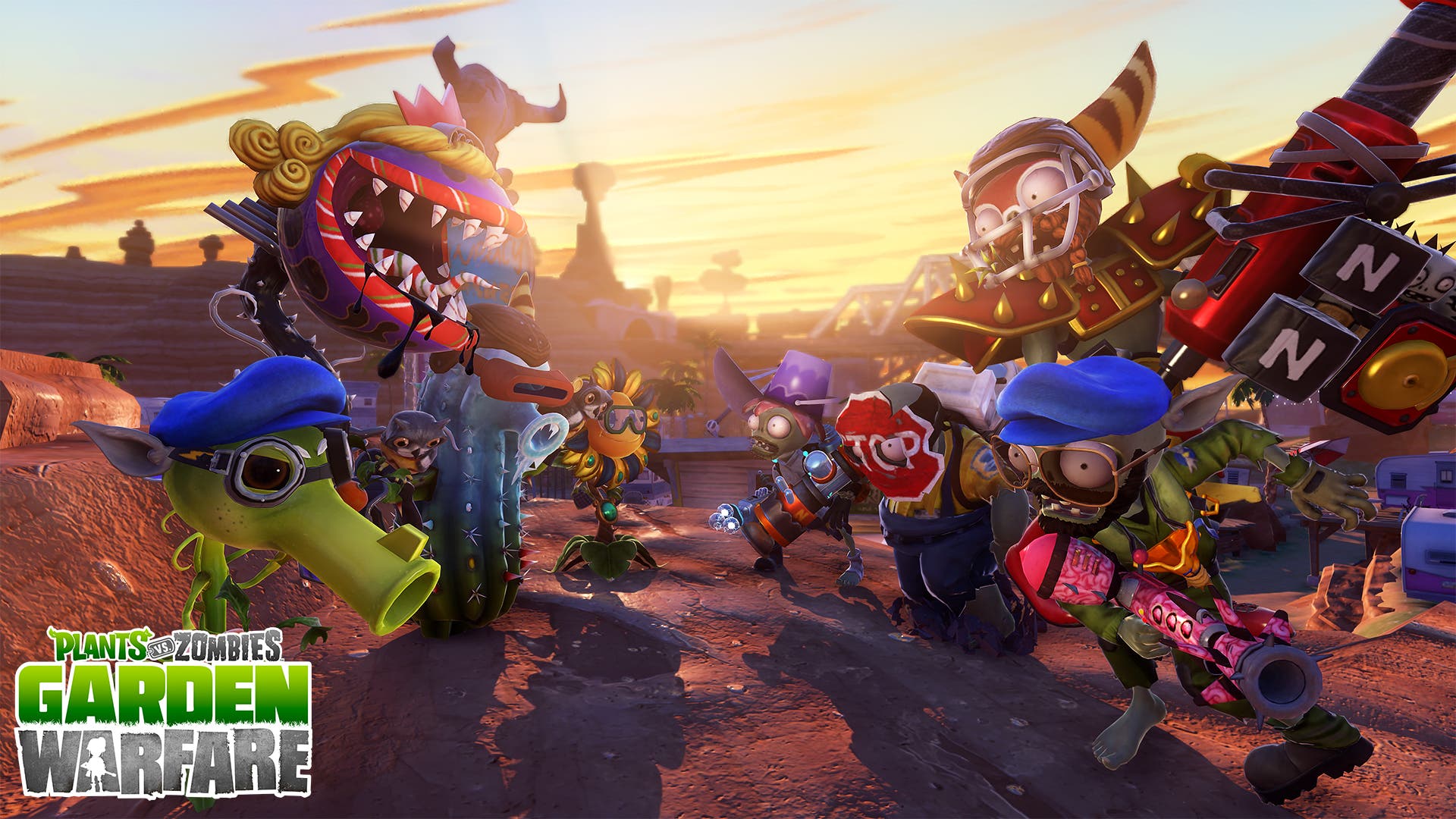 Months later, PvZ Garden Warfare is still visually delightful, deceptively fun, and engaging. It being hinged on multiplayer-only is disheartening. While one could try to tackle the ten waves on their lonesome, are going to have trouble, even on the easy difficulty. Local multiplayer eases the pain of the online, provided you have people to fill in the void. The in-game currency flows at a steady rate to purchase packs that unlock new characters, unlock alternate outfits, or to allow you to to plant smaller photosynthesis-processing defenses. Being a game that doesn’t have any clear reason to exist, does – and it’s slightly bare-bones and less than ideal with such a huge focus on multiplayer, could be a turn off. Whether with strangers or friends, you’ll find an exciting game to play across ten waves.

Despite varied objectives during each play, still ends up feeling repetitive, and is the exact opposite of what a game like this is trying to do – draw you in and not want you to stop playing. Plants vs Zombies Garden Warfare gets so close, but is still so far away from capturing the magic that made even the original Plants vs Zombies so addictive. Which is a shame, which leaves just an average game with a lot of untapped potential.

The overall mechanics are tight and responsive but also a little strange as aiming requires you to lead your shot. It’s an odd thing to have being that this isn’t trying to reach any sort of realism. In fact, this game just seems to be caught in this weird place where it’s a third person shooter with characters designed for, kids? There’s also the fact that the brand itself is associated with a “casual” market that wouldn’t usually give a shooter two shakes. So the big question is who is this game for? Kids who can’t get into a shooter like Call of Duty yet? “Casual” gamers who enjoy the brand Plants vs Zombies? People who enjoy team based shooters? I guess you could say that they all are the targets but it’s still this odd place where it can be seen as too kiddy looking for children to want to play and too difficult to understand for a “casual” gamer. I’ll just recommend Plants vs Zombies to those of us who like a good team based multiplayer shooter or a very good wave based survival experience. The game carries a $40 price tag and with it being fairly light on content other right now, remember just two modes, it’s hard to stomach that price. The release of the new Garden Variety Pack does help take a bit of the sting away but it still feels too light at $40.