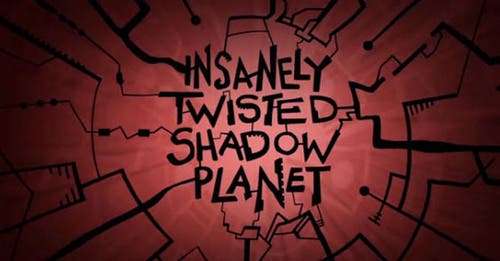 From the start of the game – you are thrust into a world of chaos. Storytelling in Shadow Planet is kept to a minimum and told in little vignettes with the swelling orchestral music of Dimmu Borgir’s “Progenies Of The Great Apocalypse”. These scenes are somewhat calming despite what you are seeing on-screen. A scourge has struck a nearby planet, and it’s up to you to save it and your Homeworld.

Exploration, scanning, finding weapons and upgrades, backtracking with newly acquired weapons, and fighting large bosses are the name of the game. Those words could describe: Metroid, Castlevania, and more recently – Shadow Complex. While it’s close, it’s not Metroidvania to the purest level. It has its own twists to the formula. Instead of being a person on solid ground, you are in a free-floating ship. And obviously while in direct control of your ship at all times, you’re not getting out of it, or jumping from platform to platform. This is, possibly easier than the typical game of the genre.

The dual joystick controls gives you precision and control on a level only seen in Super Meat Boy. If you’ve ever played Geometry Wars, Smash TV, or countless other dual-joystick shooters seen on XBLA or PSN – you’ll be right at home with these controls. Movement doesn’t incur too much momentum, as when you want to stop, you will. Aiming works as you’d expect, able to fire with a simple press of the RT button.

You’re free to explore any area you please, barring any weapons you’ve gained to allow you access. Whether you see it or not, the game is deliberate in how it wants you to go and how. It’s not all bad as it gives you a sense of direction. The entire map is visible from the beginning, but only as you uncover each location will it fill in the details. There are buttons tied to taking focus to your Ship and the Destination if you ever get lost within the map – which proves to be quite helpful if you accidentally press either joystick in a direction.

There are up to 9 weapons at your disposal for progressing through the game. You can map four to the face buttons as hotkeys. There is a bit of animation when swapping between weapons, either through the hotkeys and the wheel interface – so you have to be careful with your timing. It’s worth noting that not all of the weapons are, weapons. Some of them are tools to help your progression. The arm tool is used the most in the game and works pretty well except in tight spaces.

The art, as you can see is rooted in black with a lot of other dark colors around it. Surprisingly, Michel Gagné’s art does not get in the way of the action. Everything is easily visible and manageable to distinguish you from your enemies. Although, I would recommend that you play it later in the day or at night with the lights off – but it only helps to accentuate the atmosphere. The inspiration comes from ‘Insanely Twisted Shadow Puppets’ that aired on Nickelodeon television back in 2005. This carries over and looks beautiful. There are definitely parts where you just have to stop controlling the game, and let your eyes take in the beauty of the world around you.

Sound instills loneliness. And each of the 9 weapons has a distinct sound effect. The enemies have eerie and specific sounds that are unique as well. Music, as I mentioned is all done by the metal band, Dimmu Borgir and to great effect. The music itself only appears in the beginning, cutscenes, and end credits – but fits the mood.

Some gripes I have with the game involve mainly the the lack of a mini-map. It would be nice to have a map of the current area to help you keep you going in the right direction. However you’ll frequently press the back button to see where you are and where you are going. The transition time that it takes to do that is minuscule that it won’t really affect anything – but doing it frequently enough will bother you. Additionally, there’s no text to the game other than menu text, but once you are in-game you are on your own to discover how to beat bosses and solve puzzles. The hint system works to a degree, but could have used a bit more polish to get the point across.

A multiplayer mode makes an appearance in this action-platformer, called Lantern Run. It’s a cooperative affair where you have to drag a lantern through randomly generated arenas. Weapons and upgrades must be spread evenly to ensure success. Failing is inevitible due to the looming monster chasing you and your crew. It’s attempt at longevity for the game will do it some favors, but people will move on quickly – it should be played for it’s uniqueness to that of the story.

Insanely Twisted Shadow Planet tweaks a strongly known formula and makes it’s own with style and grace. If you played last year’s Limbo, you’ll find a lot here to like amongst the Metroidvania style of gameplay and exploration. I urge you to get yourself the trial and after you’re done, you’ll be buying the full version to see what else is in store.