Shadow Planet Productions is pleased to bring Insanely Twisted Shadow Planet‘s first Game Add-On, Shadow Hunters, to Xbox LIVE Arcade.Shadow Planet Productions’ partners and creators of ITSP, Michel Gagné (Gagne International) and Joe Olson (Fuelcell Games), are confident that this addition will further enhance the player’s experience and expand upon the narrative of the main campaign, as well as give an opportunity to tackle new challenges alone, or team up with your friends locally or over Xbox LIVE on your quest to eradicate the remnants of the invasive shadow virus. 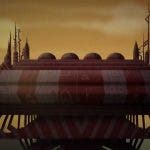 This new mode begins with a cinematic that picks up exactly where the final scene of the main campaign left off. In a nearby asteroid belt, the Shadow Entity still thrives, and the player must clear these asteroids of the nefarious infection before it begins to spread again.

“Shadow Hunters won’t be more of the same”, said Gagné. “I’m really happy that we were able to further the story, push the art in a new direction, and create a potent gaming experience. We took the best aspects of ITSP while exploring new ideas. As far as I’m concerned, Shadow Hunters may very well be the most exciting part of ITSP.”

“The whole team has really outdone themselves on Shadow Hunters”, says Olson, CEO of Fuelcell Games. “We started with the exploration and puzzle elements from the Campaign and incorporated those with the procedurally generated level and fast paced decision making elements from Lantern Run, then pushed these ideas even further to create a challenging and addictive new game mode in the Insanely Twisted Shadow Planet universe.”

Shadow Hunters is for 1 to 4 players and will be available on Xbox LIVE Arcade on October 12th, 2011, for 400 Microsoft Points.