The most critically-acclaimed shooter of the year is poised to immerse fans in a brand new campaign adventure unlike anything they’ve experienced before. Available today on Xbox LIVE for 1,200 Microsoft Points, the second major game add-on for “Gears of War 3,” “RAAM’s Shadow,” delivers more than three hours of new campaign gameplay, and for the first time, features missions on both sides of the Locust war.

Set in the chaos of post-Emergence Day Sera, “RAAM’s Shadow” drops players into a new team of Gears known as Zeta Squad as they attempt to evacuate Ilima City and protect the citizens against a Locust Kryll storm. Taking on the infamous Locust leader from the original “Gears of War,” General RAAM, Zeta features the familiar faces of Michael Barrick (from “Gears of War” comics fame), Lt. Minh Young Kim (“Gears of War”) and Tai Kaliso (“Gears of War 2”), and introduces a new female comrade, Alicia Valera.

In addition to fighting as a new squad of Gears, players will step into the boots of RAAM himself, and for the first time storm a human stronghold from the perspective of one of the series’ most legendary bosses.

Players can experience “RAAM’s Shadow,” obtain all the previously released multiplayer maps, characters, weapon skins, Horde fortification upgrades and Achievements in the “Horde Command Pack,” and gain access to two more upcoming game add-ons by purchasing the “Gears of War 3” Season Pass for 2400 Microsoft Points, which entitles them to the first four game add-ons for a discount of 33 percent. 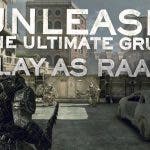