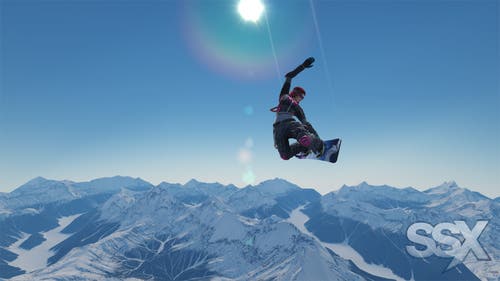 It is 2012 and the undisputed king of snowboarding games has returned in a reboot of sorts. In a world where extreme sports games have been left in the first half of the 2000s, SSX returns bigger, badder, and better than ever.

Let me count the ways I love the new SSX. It’s faster (60fps), prettier (1080p), and deeper (153 drop zones) than any SSX game before it. The first mode you’ll have to dive into is World Tour, scouring the globe and carving into nine locations with a tenth location being Mt. Fuji – a bonus for PS3 owners. Here you’ll gain the basics of the game through a tutorial and learn the three modes of the game: Race It, Trick It, and Survive It. All of it is pretty explanatory, except for maybe Survive It which is new to the series, more on that in a bit. The World Tour is the Story to the game, which is mostly forgettable. Not to mention the egregious explanation for what SSX stands for now (I don’t want to say it, please don’t make me say it). It won’t take you especially long to complete, as the game will cherry pick specific courses to compete across the three event types, the third being Survive It serving as the “Boss” for each area you dominate. You’ll encounter nine different environments including Ice, Whiteout, Cold, and Trees.

The inclusion of Deadly Descents [Survive It] is a fantastic tragedy as you journey into the unknown and more than likely will meet death face to face on your first time out. It is this that makes the game unsure of what it wants to be. One side you have this game where the tagline is “Defy Reality” and you are tricking off helicopters, performing impossible amounts of flips and grabs and landing perfectly on your board. On the other, you have this introduced mortality system that, if you take too much damage, deprive yourself of oxygen, or fall into a never-ending crevice – you DIE. Contrivances aside, the mode has actually grown on me quite substantially that I enjoy it the most out of any other mode just because I am the most competitive there. Outside of World Tour, you can ride to the bottom of a Deadly Descent, and should you survive – you get a helicopter that takes you to the top for you to ride down it again to increase your score.

It’s quite apparent what the game is about, tricking. Whether you’re in Race It or Survive It. Tricks are the key to earning boost, earning and using boost makes you go faster that helps you get a better race time or gets you out of some immediate danger. SSX fans prior to this game will be pleased as the face button trick system (similar to Tony Hawk) can be used to play the game or the new, more fluid (Skate-like) right analog stick control. The success you’ll have in the game is by not repeating tricks and learning when and how to perform tricks before you run out of airtime. Should you make a mistake, you can easily rewind at the sacrifice of score or time depending on the mode. If it’s a Survival event, you have a limited number of rewinds before you have to start all over.

Whether you play World Tour for a few minutes or even hours, you’ve already unlocked Explore and Global Events. Explore is the full experience in which you have access to all the drops in the game to earn Medals (Bronze, Silver, and Gold). In addition, SSX borrows from Criterion and the creation of the Autolog used in Need For Speed Hot Pursuit, called RiderNet here. Anytime you get a fast time, a top score, or the highest distance on a survival drop – it’ll put it into RiderNet for your other friends to see and try to compete against. When you complete an event, you can Retry the event or have RiderNet Recommend the next drop so you never have to go back to the Google Mapesque view and pick the next location.

Many of SSX alumni show-up: Elise, Griff, Mac, Kaori, and even Eddie Wachowski from SSX Tricky. There are four new characters to play as: Tane Mumea, Alex Moreau, Ty Thorsen, and lastly Travis Rice – a real-life snowboarder is a first for the series. He will soon to be unlocked via Likes and Shares on the Facebook page. The characters are not only cosmetically different but carry different attributes with them. You no longer level them up like in SSX3 and build them up, but independently they do level up the more you use them.

By leveling up characters you can purchase better gear for your rider to do better on the slopes. You can buy new snowsuits which are only cosmetic in appearance and don’t carry any attributes. But when shopping, the only types of gear you want for snowsuits are the ones that glow – trust me, for the night courses you look like a Tron snowboarder. Outside of that you can buy new boards, and the boards carry specific attributes that make you better at speed, tricking, and boosting. Lastly, each area requires that you wear Armor, Wingsuits, or Pulse Googles. Each one of these equipment types have stats too that unlocks higher level gear as that character levels up to get the most out of it.

SSX takes an unconventional approach in the genre of game, to include colored loot with orange and purple being the best – but will cost you a lot of your in-game money to purchase and use. There’s a bit of microtransaction business going on in which you can transmute real money into in-game credits to purchase items for your characters. It’s kind of dirty, and it’s always there in the menu – but luckily it never suggests these things for you.

Badges are an in-game achievement system that you earn by performing specific tasks. You can view the entire listing here or in the game buried deep in the menu. Many of the game’s actual achievements/trophies tie into this system as well, so it is beneficial for you to learn what else you have left to do to earn them, if you’re into that sort of thing.

The crunching of the snow as you carve through it or drop into it, sounds great. The soundtrack is a great mix of rock, electronica, indie, and dubstep. It’s not “EA Trax” anymore, but you can pick and choose the tracks that play and how they play. Or you can use a custom soundtrack. What really stands out is the way the soundtrack plays, it’s dynamic. The game will on-the-fly remix the soundtrack based on what you’re doing and whether you’ve earned Tricky or Uber moves. Tricky being enabled of course puts the famous Run DMC track “It’s Tricky” over what you’re listening to.

I am a huge fan of SSX, and when “SSX: Deadly Descents” was first announced at the VGA’s a few years ago, it wasn’t very inviting and put off a lot of the fans. Since then, it has definitely been retooled and while it has a bit of identity crisis, does everything to honor the series and brings forth new elements to make things fresh and exciting for old and new fans.