Twisted Pixel and Microsoft Studios announced today a new installment of add-on content for the award-winning Kinect title The Gunstringer.  The 240 MSP content is called El Diablo’s ‘Merican Adventure and gives players control over an all new protagonist in the form of El Diablo, the sinister soul whose twisted heart aches for a true love to be his queen.  Featuring four levels filled with hang-gliding airmen, gun-toting brothel babes and angry bandits dug in deeper than Alabama ticks, El Diablo’s ‘Merican Adventure presents a new twist to the Kinect-based puppeteering cowboy revenge shooter genre.

For those that have not yet experienced the intense sharp-shooting and gator-loving action of The Gunstringer, the studio has also announced a new outlet from which to acquire the Kinect exclusive: Games On Demand for $29.99 USD (prices may vary internationally).

“The Gunstringer was our first retail game, but it’s nice that we were able to make it available digitally as well,” says Twisted Pixel’s Michael Wilford.  “Digital distribution is key to the studio’s ambitions.”  Then Technical Director Frank Wilson added, “yeah, that, and we didn’t have to do anything extra to make it work.  The new DLC is pretty rad though.”

More details can be found on The Gunstringer official blog and website: thegunstringer.com/blog 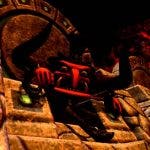 the gunstringer goes games on de