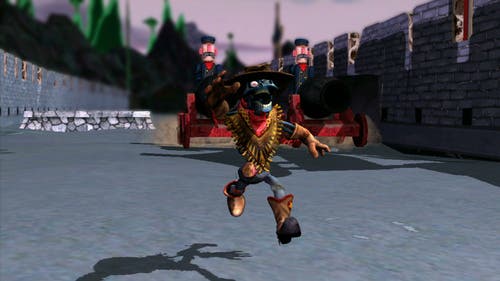 Originally coming to Xbox 360 as the “First Xbox Live Arcade Kinect” game, is the Gunstringer from Twisted Pixel Games. They’re known for their 360-exclusive downloadable titles: The Maw, Splosion Man, Comic Jumper, and Ms. Splosion Man. Somewhere during development, the project shifted from being an XBLA title to a full retail release. Stepping out from the normal downloadable release has done Twisted Pixel well, providing the best Kinect game to date – in fact, this feels like the first true GAME for Kinect.

The premise here is that you are controlling a marionette and putting on a play. Twisted Pixel’s penchant for full motion video returns with a vengeance here. As there may have been little bits here and there, but with a full retail release probably expanded that exponentially. Some fourth wall stuff makes it interesting and worth watching. There are four plays and five acts per play that make-up the story of The Gunstringer’s revenge on getting those in his gang that betrayed, buried, and left him for dead. It’s not all serious, most of the plays are hilarious and entertaining, containing elements of comedy such as a love child between a Lumberjack and an Alligator. Unless you’re not into that.

This is a Kinect game through and through, so there is no gamepad option. You control using your hands (naturally). You will be reminded of the “pat your head and rub your belly” test of dexterity.  You move the Gunstringer (character) with your left hand (or right if you use “Lefty Mode”) and shoot with your right hand shaped like a gun. Over a short period of time, everything will feel natural. In a surprising twist, this is the first Kinect game that encourages you to sit down and play. During loading screens, the game frequently reminds you of this. It works well, so you might as well try and it see how it works for you. I found the controls to be a bit finicky here as it tried to read what is your leg and what’s your hand – your experience may be different.

Through playing the game, whether sitting or standing never feels like exercise. You may sweat a little here and there, but the motions are short and responsive. The Kinect tracking really shows off here, as it detects you a lot better than other games for the motion tracking camera. You paint targets with the reticle and then with a swift pull back on your wrist or arm towards your shoulder, will then begin shooting his 6-shooter and one-hit kill his enemies. There’s a variety of actions: running and shooting, dual wielding, side-scrolling and platforming, etc. All of it is easy to perform.

All of The Gunstringer’s movements are on-rails, meaning you don’t have control whether your stop or not. There are non-moving sections while you take cover to shoot, but those are strewn about each level. There are even some areas where you are riding on a flying object and it feels just like a motion controlled Panzer Dragoon. While these on-rail events occur, you’re required to thread the needle. That is to say, it requires precision that depending your lighting may be detrimental to your score, patience, and experience. On the subject of dual wielding, we’ve all wondered how it would be possible to do true dual wielding in a modern game. I think the Kinect has solved that. Independently tracking each firearm and even allowing them to criss-cross without some sort of miscalculation. It’s really exciting to play these sections. It looks and feels as fun as you would think.

Some elements repeat over time, but each setting is different – the final act being the most diverse and visually pleasing. Each play is capped by a boss battle that requires a lot of finesse. It’s a 2D fight in which you you must avoid a boss’ attacks – then retaliate once they dizzy themselves. Physics are heavily involved in that you can’t swing too hard and/or wildly or you’ll accidentally hit the boss when it’s not time, a projectile he or she is throwing, etc. Each boss fight is basically the same, with little variety – but easy to take down unless you play on Hardcore difficulty and your health and score will drop drastically.

If you fail at any point, you can resume from a checkpoint though your score will be reset to 0. Or you can restart the level entirely. The standard difficulty is much different than Comic Jumper or Splosion Man games, meaning it’s much more forgiving and ultimately enjoyable. It’s experience they allow you to finish quickly an easily. Though, as I said before – Hardcore can provide that extra challenge if needed. The ending, while I will keep it protected, provides something clever and makes good use of another Kinect feature not often thought of.

There’s a lot of replayability in the game. You can go back to earn higher medals, play on Hardcore, or play with a friend. Co-op is handled differently than you’d expect, one player is red and a second gun is controlled by the second player in blue, but no second character exists. There are plenty of  extras to unlock in the bonus store – commentary, videos, pictures, and even an achievement.

You’d be hard-pressed to find a better value here. The Gunstringer is absolutely fantastic at $40 by itself. But it’s inclusion of an XBLA Kinect game (the first) and free DLC makes this a deal you can’t pass up and will provide a lot of entertainment and replayability and makes your investment in a Kinect worth it.

BONUS: The Gunstringer comes with Fruit Ninja Kinect, an XBLA game which normally costs $10 – you get for free. Though it is just a code to download the game, you can’t install the game from the disc. Additionally, the first DLC called “The Wavy Tube Man Chronicles” is a departure from the main game, playing more akin to Mad Dog McCree than The Gunstringer. It’s highly entertaining and the length of a whole play. It’s free, out now, and is well worth your time and shows off more FMV love and Twisted Pixel’s bizarre, twisted humor.