Coinciding with the unveiling of the 2013 Viper at the 2012 New York International Auto Show, Turn 10 Studios is announcing the upcoming availability of the 2013 SRT Viper as downloadable content in Forza Motorsport 4.

The Viper add-on pack will include a drivable version of the SRT Viper, which will highlight the car’s powerful on-track performance, as well as a crafted Autovista™ experience designed to highlight the car’s incredible features as well as its colorful production history. As with the rest of the cars in Forza Motorsport 4’s Autovista™ mode, fans will be able to explore and extensively interact with the car using either Kinect or their Xbox 360 controller.

Officially unveiled today at the 2012 New York International Auto Show, the 2013 SRT Viper is the latest in the long-standing Viper line of American supercars. Dodge began the Viper model line in 1992 with the first model known as the RT/10 Roadster and has made consistent improvements to the Viper line through 2010, when the last version of the last generation of the Lemans-winning Viper models rolled off the assembly line. Fans everywhere have been eagerly awaiting its return – soon to be realized in Forza Motorsport 4.

In addition, SRT Viper announced that it will be returning to the American Le Mans Series and debuted its competition-ready SRT Viper GTS-R, sporting a Forza Motorsport-themed livery. The car will make its race debut later in the 2012 ALMS season. 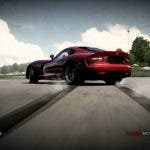