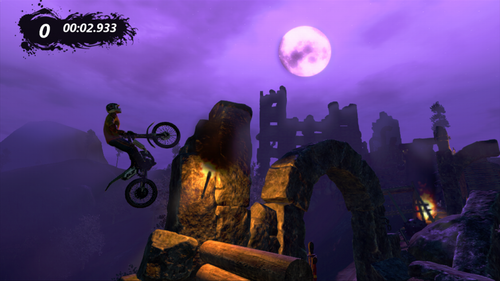 Trials Evolution is a sequel to 2009’s Trials HD, which just about set the world on fire with it’s addictive gameplay and constant competition among friends and strangers. It revitalized and created importance for the usage of leaderboards. Trials Evolution brings a new set of matches to start that fire all over again.

If somehow you missed the 2009 XBLA hit, then Trials Evolution is a time attack game using dirt bikes across difficult and physics bending terrain. As you play, you’ll unlock higher difficulty tiers, and faster bikes to go along with them. The game is designed with trial and error in mind, and is optimized to get you back into the action if you get stuck or have to reset. There are two options to do so, reset to a checkpoint or reset entirely, and it literally takes a second to get back to the action. Trials is also known for its difficulty. It gradually ramps up this time, better than its predecessor. In-between new difficulties, the game tutorializes you with new concepts you’ll come across along the way to aid in your effort to be a better player without being lost.

Trials Evolution is a great looking game. Trials Evolution does away with the enclosed, dark warehouse levels. Nearly every level happens outdoors with varying times of day and weather. And the draw distance is spectacular, levels appear endless in scope. It is great to see that RedLynx took feedback from Trials HD to make the levels more grandiose and a lot more fun. An editor was included in Trials HD, but you could only share levels amongst friends. Now, the doors have been blown wide open and now you have two types of editors, Lite and Full to create the tracks of your dreams. Or create a new genre. Yes, Trials Evolution’s editor can allow you to make any kind of game you want using the game’s engine. RedLynx has already provided levels in which you jetpack, play angry birds, or even play a game of foosball. It’s silly, awesome, and incredibly amazing what can be done.

While everything mentioned seems to be fixes or improvements of Trials HD and is more an expansion pack, extensive DLC, or at worst – a patch. You’d be way off. Levels feel familiar, but really are not. They’re all brand new and challenging. The new rider and bike customizations allow for you to create personalized racers for your own viewing in single player, but is most important when used in the new multiplayer modes to keep track of your rider. Though, you’ll still end up following the closest rider to the camera because that’s what you’re used to.

Multiplayer really only has one new mode, Supercross. Tracks are specifically designed with four lanes so that you and 3 other friends and strangers can compete in races. Should anyone fall behind, they are teleported to be with the pack, but with a fault lowering your final score. The other online modes are Trials (Regular and Hard), which allows you to simultaneously race with others in order to have some live competition and chat with them, rather than their ethereal presence in the single player mode.

Trials Evolution is truly an evolution for the series. It’s bigger and better, and exceeds Trials HD by a large margin. All of the crazy track design and endless need for finesse make this one of the best arcade games you can own. If you missed Trials HD before; get Trials Evolution now!