Pid faces off against The Crook in “The Hold-Up Hustle”

Getting up the courage to hold-up a passerby, The Crook attempts to get the best of Kurt. What he doesn’t know is that Kurt is more clever than he appears to be. In a whimsical combination of hand-drawn animation and gameplay, the new video shows off one of the most exhilarating boss battles in Pid. Kurt faces many great foes, and this isn’t even close to the end of his journey.

Screenshots of “The Crook”: 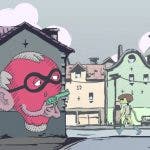 pid faces off against the crook