Assassin’s Creed III Liberation includes key pillars of the franchise that fans of the series know and love, including combat, free-roaming navigation and a rich story full of intrigue and twists, delivering a true Assassin’s Creed experience to the Sony PlayStation® Vita. 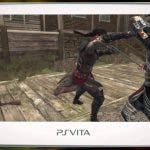 Gamers play as the series’ first female protagonist, Aveline. A woman of conviction, Aveline is fighting for freedom in 18th century New Orleans – a city on the brink of a rebellion as the Spanish Empire imposes its new rule.