The skies will be set aflame as indie development thugs Vlambeer and worldwide gaming cartel Devolver Digital join forces on the upcoming stylish arcade shooter LUFTRAUSERS. Ace pilots around the world will be able to customize their very own “rauser” and battle wily enemy fighters amongst the clouds or charge colossal battleships scattered across the open seas.

“LUFTRAUSERS is the only game in which players can build and fly a LUFTRAUSER – the most interesting engineering achievement of mankind ever. Flying one is said to be the most amazing feeling and we wanted to bring that experience to everyone,” said Rami Ismail, co-founder of Vlambeer.

“For every plane that is shot down in LUFTRAUSERS I pledge to personally donate a portion of the profits from the game to an exotic dancer of my choosing,” said Devolver Digital CFO Fork Parker. “Call me old-fashioned but I have soft spot in my heart for ladies willing to take their clothes off for money.”

This marks the second collaboration between Vlambeer and Devolver Digital after 2011’s Serious Sam: The Random Encounter. LUFTRAUSERS is set to release on PC and Mac in late 2012 and consoles in 2013 with a price point set at $5,000. Release date and price subject to change. 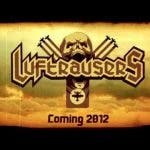