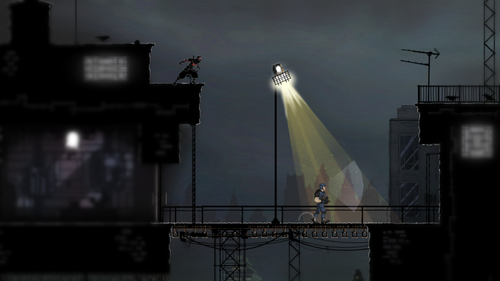 Mark of the Ninja Review

Stealth games have a tendency to punish you for failing. Thus, making the entire experience a test of patience, utilizing trial and error, and memorization; ruining the fun of what makes stealth games enjoyable. Klei Entertainment’s Mark of the Ninja sets out to change that. Does it succeed in its mission or trip an alarm?

One of the first things you’ll notice when playing, is that all of the game’s mechanics are visual cues on-screen. Eschewing the need to take up precious screen space with HUD for the tired light and sound meters, taking focus away from the main screen. New Game+ removes these visual cues for a highly challenging experience. There are also elements of the HUD that can be turned off in the options menu.

Sounds like footsteps, glass breaking, shots being fired and weapons thrown and hitting their target emit a Doppler effect. It is represented visually by an expanding ring to let you know how far that sound traveled and if anyone was alerted to the source. Your character is a ninja, so sticking to the shadows helps your cause. Doing so will bask you in darkness and your character will be in all black save for the red, tattooed face and white outline. When you step into light, your character is illuminated clearly and shows that you are wearing red and dark blue. This signals when you can be seen and when you can’t.

When you are not able to see an enemy directly, you’ll see their footsteps and a red silhouette of them marking their last known position. This helps gauge current position. Closed doors allow you to use your senses more directly. You can put your ear up against the door and then create a vision on the other side as to what’s happening. Also, you can hang from ledges and peek to get a view, but risk getting seen and shot on sight. Despite being a ninja that has quick reflexes, you are extremely fragile. One or two bullet hits is enough to do you in.

Story is delivered via lengthy and well-voiced cutscenes with terrific animation. Your partner provides in-game commentary and is your Grimmsdotir of Splinter Cell here, who guides you in your path. There is a clash of old school ninja ways clashing with the technology placed to catch you. You appear primitive in execution, but your abilities as a ninja allow you to overcome the obstacles that have been laid before you. There are many lights that can be destroyed, but over time, new and better equipment is being installed at the facilities you infiltrate such as motion detectors and dogs who can sniff you by scent alone make it so new strategies should be employed.

Upgrades are helpful to your success. Completing certain objectives, collecting seals and doing well in the game earns you points to spend on upgrading your ninja. Whether it be adding a slide kick, rising kick to your moves list. Buy armor for better protection. Or you can buy new abilities like descending from a light to stealth kill an enemy. You can upgrade weaponry such as smoke bombs to last longer and choke enemies into a stun. The character progression is slow, so revisiting prior levels is not only fun but a bit of a necessity if you want to improve your character for New Game+.

At the beginning of each level, it allows you to pick a load out from the style of ninja to distraction and weapons that have lethal effects. The downside to Loadouts is that there is uncertainty on what weapons to bring. Only through playing it once will you know what to bring on the subsequent replay. If you do get caught, it isn’t the end for you as you can run away or kill the enemies who’ve found you and be able to continue on, with a loss of points from your overall score once you complete a mission.

It’s easy to see that the game has a great art style, which fast and fluid. Players of Shank will see the similarities and appreciate them. The cutscenes themselves could be an animated show they are done so well. They last long enough to tell you what you need to know and get you into the next level to do more of what you want to do. Music is downplayed in favor of the sound effects in the game.

Mark of the Ninja executes perfectly with its style, design, aesthetics, and addictive and highly replayable campaign and individual levels. The Summer of Arcade may have left you broke, but muster up some cash for Mark of the Ninja, as it is quite possibly the best stealth game out there. Buy it, queue it, stealth kill to your hearts content.

A download code was provided by Klei Entertainment for review purposes