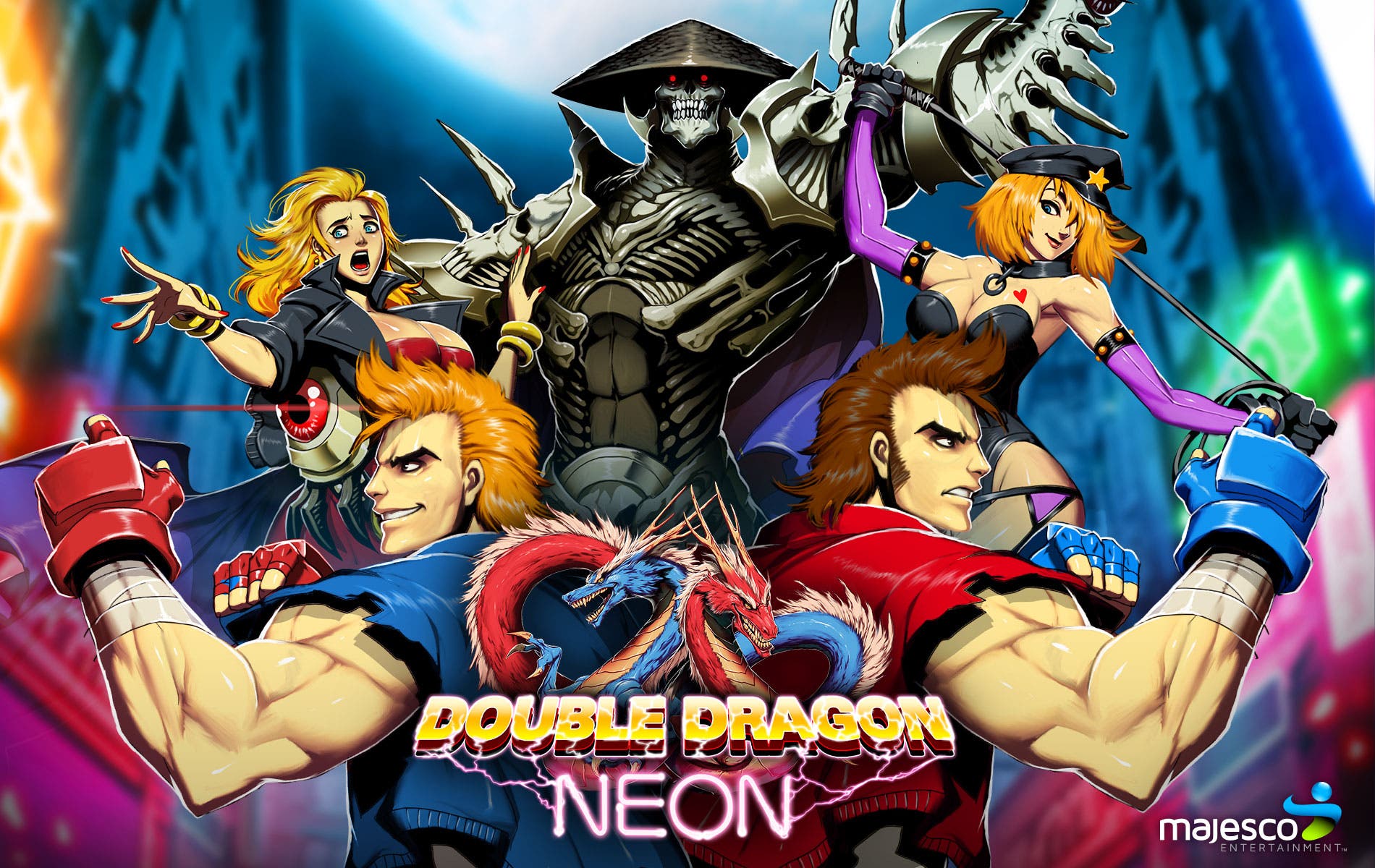 WayForward Technologies has quite the reputation for rebooting series into wonderful 2D sidescrollers while paying respect to the source material. If you’ve played the original Double Dragon, Neon starts off in basically the same fashion; a few thugs come into town, see your girl Marian waiting outside for you, punch her in the gut, and kidnap her. Obviously the end goal is to rescue the bodacious Marian while unleashing the psychedelic fighting powers of brothers Billy and Jimmy Lee.

From initial videos, the combat just looked slow and stale and I was all about to drop a load on this game, but after playing I know how mistaken I was. WayForward kept the soul of Double Dragon in place with regards to gameplay. It’s a side scrolling beat’em up in every way. Press X for a normal attack and Y for a strong attack, then when your opponent is stunned, press B to throw. Press the right bumper and unleash a devastating Sosetsitu attack from 10 different choices; more on that later. In true to Double Dragon’s spirit, you can pick up a slew of weapons to send your foe’s flying. Things like: baseball bats, tazers, knives, katanas, paper fans, and even pink hair picks. It’s not going to be as fast as say Teenage Mutant Ninja Turtles but you can still pull of some radical combos and air attacks. You can duck enemy attacks at the right time to get an attack bonus but I would have liked to see the inclusion of a block/parry rather than the duck, I was having issues timing the enemies attacks to get that attack bonus.

You’ll encounter familiar baddies to fight from the weakest thug, scantily clad girl with whip, to the freakishly large Abobo. New enemies are consistently introduced through each new level with their own attack patterns, strengths, weaknesses, and sometimes witty dialogue. Skullmageddon is the evil fiend in this game and he looks like a modern Skelator with an Asian bamboo hat. Not only does he have that look he almost sounds like a dead ringer for Skelator too. He does have some of the more witty lines in the game as well making him one of my more enjoyable characters as of late.

What would Double Dragon be without playing with a friend? Grab a second controller and both you and a buddy can be beating up on some thugs. Unfortunately at time of release there is no online co-op, just couch co-op. According to WayForward, online co-op will be patched in at a later date which is great because this game would benefit from online co-op. Playing with a pal is the suggested path but that’s not to say going solo is a lackluster time, I still enjoyed going through by myself. It is a little depressing to see your character hold up his hand for a high five (press in the right joystick!) only to be left hanging though.

What keeps this game fresh are these gnarly cassette tapes you pick up as you beat up waves of dudes and dudettes. There are two categories of tapes to aquire: Sosetsitsu and Stances. As mentioned earlier, Sosetsitsu tapes offer ten different special moves, giving some totally wicked abilities like super whirlwhind kicks, health regeneration with touch, or to even summon the spirit of the dragon. These tapes are TO THE MAX! Stance tapes on the other hand effect Billy and Jimmy’s base stats, like attack, defense, and stamina. You can upgrade tapes, making their stats rise, by visiting the Tapesmith shops in various levels or collect ten of the same tapes from fallen baddies. If you want to use the Tapesmith though, you need mithril and it seems the only way to get it is by defeating end of level bosses. You can return to previous levels in the chapter select screen, which features the classic Double Dragon characters sprites, and replay a level for better times and more mithril.

An unexpected touch but wonderfully executed was the inclusion of tape specific music that plays when you hovering over any of the tapes in the menu screen. WayForward, if I could high five you right now, I would high five you so hard to the extreme. Each song relates to the name of the tape, so for example, hover over Bomb Toss and a very 80’s pop song plays and the lyrics go, I’ll look into your eyes and cause a love explosion” Select Training wheels under Stances and a very kid oriented song goes, “don’t you love my training wheels”. Speaking of the music, the whole soundtrack is just so old school and 80’s that it fits so well with the entire package, and yes the original Double Dragon theme and some level specific themes are remixed and included.

Double Dragon Neon is a fun time, by yourself or more so with a bro (or bro-ette). With the ability to go back and replay levels for a better time and at higher difficulties, this game will keep you playing until your fingers bleed. Oh and did I mention that the hand that tells you to move forward was a power glove?