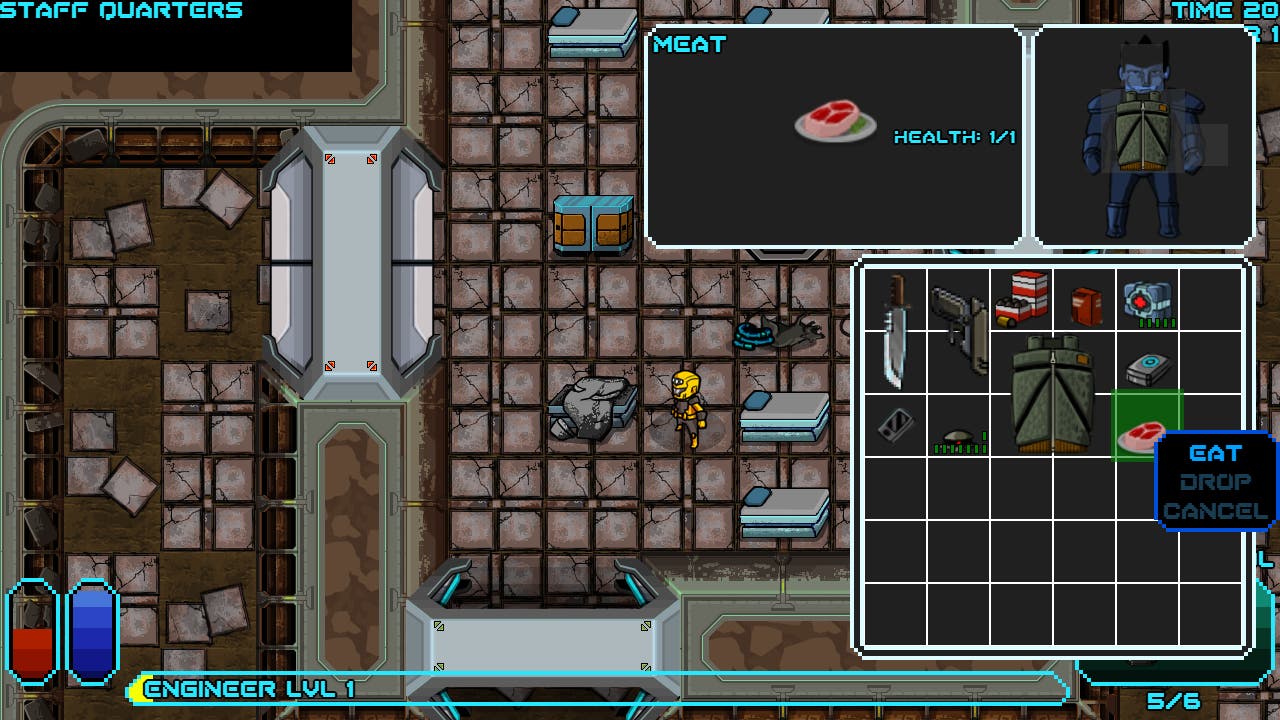 Sword of the Stars: The Pit Review

Kerberos Productions, the makers of the 4X RTS series Sword of the Stars, are back with a spin-off roguelike game where death comes frequently. And you’ll be glad it does. Often, it’ll put your character of his or her misery. Other times, it is to stop you from being bored.

If you’re new to the genre, the game does an excellent job of holding your hand through it’s optional, but almost required tutorial to teach you the basics of the game’s systems. And there sure are a lot of them. You’ll have to manage your health and a hunger meter, there’s crafting, weapons, and gadgets. It seems daunting, but it’s hardly micromanaging, at least on the early difficulties. While this isn’t a traditional roguelike, it follows the basics: death is permanent, there are RPG elements to increase stats, and requires you to survive as long as possible. Here, the end comes at reaching the Sublevel of 30.

Starting a game proper asks you to pick one of four difficulties: Easy, Medium, Hard, and Insane. Easy is just that, enemies are weak and are sparsely laid out across the randomly generated map. Insane reduces your life expectancy to mere minutes if you’re not qualified. Something unique to the game is the ability to pick a class to start with either the Marine, Engineer, or Scout. These classes, as you’d expect, have different stats to start out with. But after that, you can begin shaping your character to meet the demands of the game and become a hybrid. As you move, each step is a turn for both you and the enemies lurking in the shadows. Moving about gives you a vision cone, that somewhat represents a fog of war. It’ll cause you to lose sight on your surroundings, making things feel a bit claustrophobic. And that’s really it when it comes to any sort of tension or fear. It’s oddly absent.

Sometimes your fluid movement will be halted by the enemy making big moves or engaging you in combat that you may not be prepared for. You’ll come across to Basing this on the Swords of the Stars universe, allows the nasty creatures that inhabit the base to have familiarity as you encountered those races in their own real-time strategy games. Death comes often, and once you’re dead, that’s it. For a roguelike, that is to be expected. You’ll be greeted with a very extensive stats screen to show how well (or bad) you did.

The crafting is really neat, based on using recipes. To obtain recipes, you must use a decipher. However, if you mis-click or try to guess a recipe without using said decipher, say goodbye to those items. They get destroyed in the process. While it holds true to being hardcore and part of a roguelike, is a true pain in the ass. You either deal with the loss, or reload your last save.

Visually, The Pit goes for a top down perspective, and looks great, similar to FTL (Faster Than Light) in some respects. Colors are bright and items and objects are distinguishable from one another. The sound design is fitting and highly enjoyable.

The Pit is unfortunately apropos in name. As the entire experience, can be demanding and difficult, hardly is any fun and ends up feeling hollow. There’s a lot of depth and replayability. At $10, it feels right to ask that much from you. And for that, it’s worth its pricetag. There are just other games that do it  better, with the exception for an on-foot sci-fi experience found here.