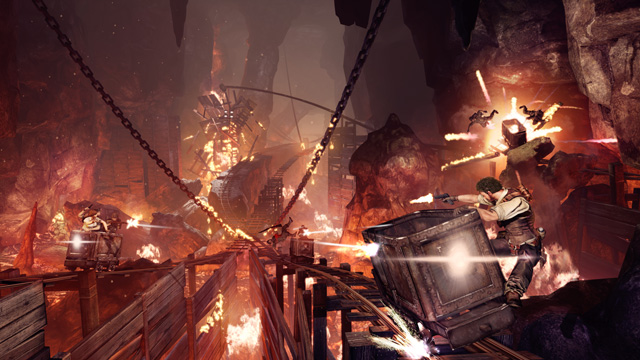 Nordic Games is pleased to announce that its cinematic Lost World-esque blockbuster, Deadfall Adventures, will be available as both a Collector’s Edition and Standard Edition, out on November 15th for Windows PC and the Xbox 360 Entertainment System from Microsoft.

The boxed/digital PC Collector’s Edition will include:

The boxed Xbox 360 Collector’s Edition will include (*):

*immediate availability of DLC for Xbox 360 can not be 100-percent confirmed at this time.

“What we’ve added to the Collector’s Edition is a real bonus for players; they’ll be able to enjoy the prestigious edition that includes a wealth of content that is also great value for money,” said Reinhard Pollice, Business & Product Development Director at Nordic Games. “The game will propel players into a first person shooter with around 70% action and 30% traps/riddles. We carefully balanced the pacing between action and mind work to let the story sink in properly.”

“We are really excited to deliver such a unique title to gamers all around the world. We have been working very hard to make sure that stepping in the boots of an adventurer will be a fulfilling experience for every fan of the Lost World genre” comments Artur Falkowski, Game Producer at The Farm 51. “Deadfall Adventures is a game for shooters and puzzle-solvers. It’s not just another story to finish – it’s all about traveling the world, exploration and visiting places forgotten by time. Pyramids covered in sands, monumental temples carved into ice, and remote Mayan cities; all of this awaits you in Deadfall Adventures” Falkowski adds.

The game uses Unreal Engine 3 to produce one of the finest spectacles this generation has enjoyed, as players battle natural and not-so-natural enemies. Along the way, fiendish puzzles, deadly traps and stunning set pieces will make this one of the greatest adventures ever told – let alone played.

In the long-forgotten temple complex, the thrill of the chase awakens the true adventurer in Quatermain, as he and Agent Goodwin strive to be one step ahead of the Nazis and the Russians, one step closer to obtaining the Heart of Atlantis. Deep in the temples, where age-old guardians awake from their eternal slumber, Quatermain soon learns that his great-grandfather’s stories are not as crazy as he had always believed. For all things live forever, though at times they sleep and are forgotten.

Deadfall Adventures will be released on November 15th 2013 for Windows PC and the Xbox 360 video game and entertainment system from Microsoft.